From £18,9959
Latest special-edition Fiesta ST gets trick suspension and a fresh lick of paint. We put it to the test on our favourite B-roads
Open gallery
Close

This is the latest limited-run special-edition version of Ford’s excellent Fiesta ST hot hatch. It’s called the Fiesta ST Edition and it’s not to be confused with the, erm, Fiesta ST Performance Edition - which is itself a brightly coloured, limited-run version of the Blue Oval’s fastest supermini.

The easiest way to tell the difference between the Performance Edition and this here Edition edition is the paint. Where the former is a searing shade of bright orange, this one comes in  dashing Azura Blue, which actually looks remarkably similar to the Nitrous Blue paint you could have on the last Focus RS. In fact, with its gloss black bumpers, rear spoiler and lightweight 18in ‘flow-formed’ alloy wheels, the Fiesta really does look like a pint-sized version of that fantastic old hyper-hatch.

However, those unique styling tweaks are pretty much where the differences between the ST Edition and the ST Performance Edition end. Like that earlier car, this one is based on the range-topping ST-3 trim level, so it gets loads of goodies (including the ST Performance Pack with Quaife limited-slip differential) as standard. Crucially, it also gets the same manually adjustable coil-over suspension, which drops the ride height by 15mm at the front and 10mm at the rear. Meanwhile, the engine is the same sweet 1.5-litre three-pot as before, developing 197bhp and 214lb ft - all of which is deployed to the front wheels via a six-speed manual gearbox.

And the price? Well, that’s £27,075, which is rather a lot when the base ST-3 - already a fantastic hot supermini in its own right - costs £24,575. In fact, it’s more than Ford asked for the £26,495 Fiesta ST Performance Edition last year. However, whereas 600 examples of that car were built, there will be only 500 of this one - with just 300 coming to the UK. So in addition to that trick suspension, you’re paying extra for a bit more exclusivity, I guess. 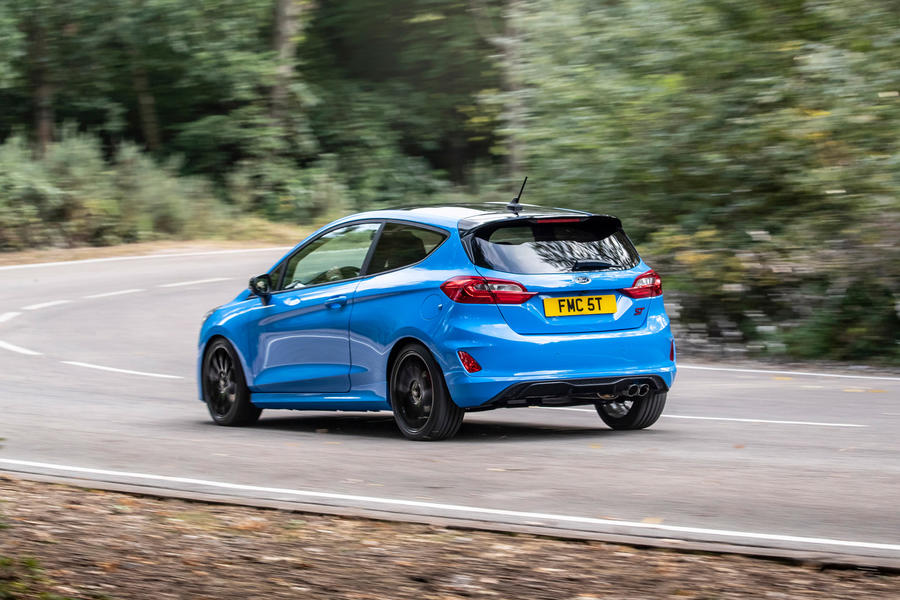 As fantastic as ever. More so, even, thanks to that new suspension. There are 12 bump and 16 rebound settings, with the former being adjusted using a rotary knob at the bottom of each shock and the latter via knob at the top of each shock. You can reach the tops of the front struts by lifting the bonnet, but you’ll have to lift the car up and take the wheels off to get at the rest. That seems a bit of a faff but at least it feels more in keeping with the general ethos of this car than it does on, say, a Polestar Engineered Volvo with its trick Ohlins dampers.

Regardless, our test car’s set-up seemed pretty spot on. It still felt firm and its body movements were kept pretty strictly in check. But this control was nonetheless underwritten by a level of pliancy that I’m not sure I’ve experienced in a Fiesta ST before. The regular car can be quite savage in its ride over bumpier bits of road. This one felt far less agitated at speed and considerably comfier as a result. Granted, it’s still pretty unrelenting at lower speeds, but a bit of aggression comes with the territory in cars like this, so I’m not going to complain too much.

Particularly when it drives the way it does. It remains as responsive, agile and incisive as ever, so on a tight, narrow B-road, it is just incredible amounts of fun. I’d go so far as to say that performance cars like this are, in fact, the easiest to get excited about driving quickly in this day and age. I drove a McLaren 620R immediately before getting in the Fiesta and I wasn’t quite as eager to get going in that as I was in the dinky little Ford. Admittedly, a lot of that had to do with the fact that wet roads and the Macca’s cold Trofeo R tyres have the potential to mix about as well as water on an oil fire, but there’s the question of performance accessibility, too.

You’d never get near the 620R’s limits on the road, but the Fiesta’s are within pretty easy reach. You can really interact with its engine and chassis in a way that you just can’t in so many supercars and sports cars these days. That fact alone goes a considerable way to justifying its £27k price. And so, too, does the fact that you can now switch driving modes via a button on the steering wheel, rather than the harder-to-find centre console button that appears in the standard Fiesta ST. 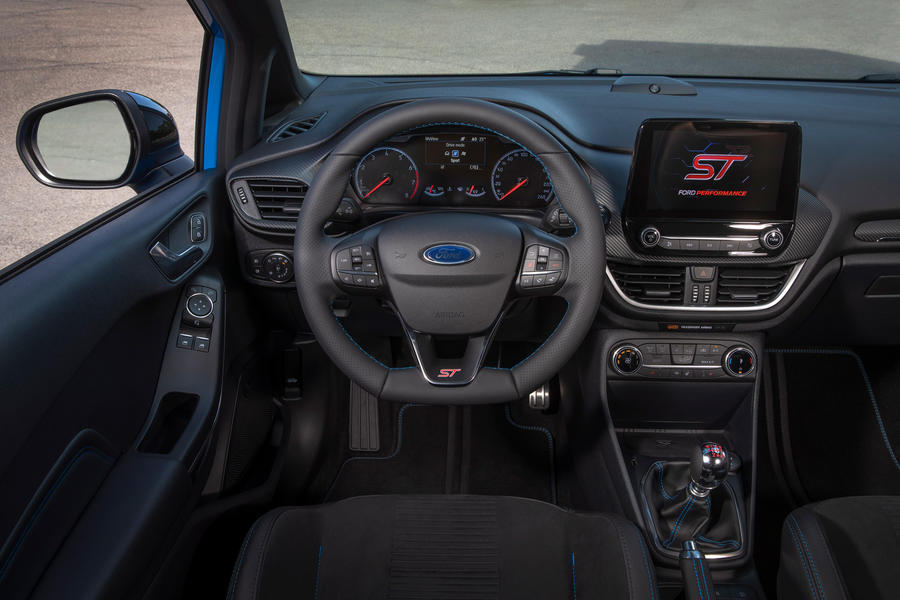 If you can get your hands on one, then absolutely. This particular version might be a fair bit more than the already excellent base car, but the additional usability its uprated Ford Performance suspension brings is worth the extra outlay.

Of course, if you’re not so sold on the paint or the flashy wheels, or you miss out on one of the 300 examples coming to the UK, you could always buy an ST-3 and spend an extra £1690 on the trick suspension yourself. But for those lucky enough to nab one, they’ll be getting an even more impressive version of an already exceptional hot hatch. 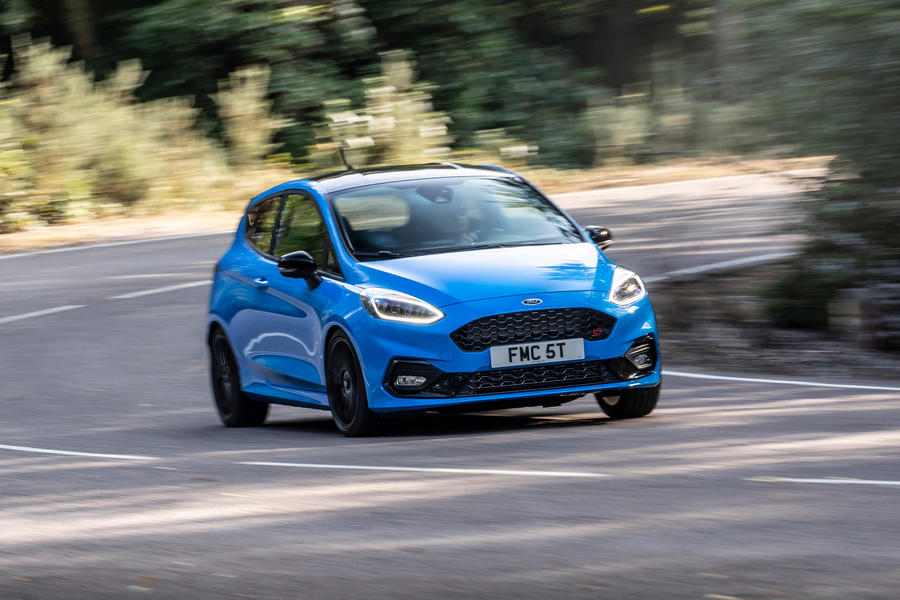 27 grand for a Fiesta. Really? It is only very few yeas back that that was 3 Series money.

It makes me feel good that

It makes me feel good that you can still buy cars like this.

Well I liked the last generation Focus RS in this colour and the Fiesta looks equally good,the black alloys with the red brake calipers  plus the gloss black detailing really do give the car a commanding presence. The new uprated suspension ensures that the car will give great pleasure for drivers on challenging roads.wisely Ford have made this only as a three door making the most of the weight saving over the five door. Do I think it's worth the extra? oh yes and the limited number being made available will surely see them disappearing from the showrooms