8
Impressive first showing for new-era 500. Its fanbase will love it and even naysayers will respect how it drives
Open gallery
Close

This new Fiat 500 looks fantastic, doesn’t it? It’s only the third ground-up 500 created by Fiat in 63 years, and the design team behind it deserve as hearty a pat on the back as the team behind its 1957 and 2007 predecessors.

Bellissimo, one might even say. Job done, others might, given how looks are the chief reason so many will purchase the 500 anyway. In its 13 years on sale, the second iteration has never sold more than in each of the past three years – remarkable, given how dated it has become to drive and feel inside.

This time, though, it’s a very different 500, for it has gone electric. And wholly electric at that. There’s not a petrol or diesel engine, or even a hybrid powertrain, in sight. Unless, of course, you buy another car in Fiat’s showrooms called the 500, because the second-generation car will be sold alongside the third for a long while yet with no nomenclature differentiation. Which won’t at all be confusing.

Here we’re driving the 500 for the first time (the new one, that is), where the cliché of ‘is it as good as it looks?’ is for once actually rather relevant. Although those looks are familiar, this is an all-new car from the ground up. Nothing is carried over at all, with the new 500 based around a new skateboard electric car architecture as Fiat Chrysler Automobiles’ first full-series production EV.

The lithium ion battery pack mounted in the floor is 42kWh – good for just shy of 200 miles of range on a full charge. Direct drive to the front wheels is through a 117bhp, 162lb ft permanent-magnet electric motor. DC rapid-charging is standard, with a full charge coming in as little as 35min from an 85kW DC charger if you can find one. A time of 4hr 15min from an 11kW AC Type 2 charger is also quoted, alongside the full 15.5hr recharge from a three-pin plug in the unlikely event that you’d ever let the battery run completely flat.

An impressive range, then, and considerably greater than those of the new 500’s most obvious rivals, the Mini Electric and Honda E, both of which offer little over half that in the real world.

The 500 has grown in size, but the numbers on paper aren’t as great as your eyes would lead you to believe when looking at a second-generation 500 next to this new one. The length has increased by 61mm (22mm of that in the wheelbase) and the width by 56mm, while height is up 29mm. However, it’s the wider rear track and the fitment of larger (17in) alloy wheels that give the new 500 its more purposeful, ground-hugging stance.

From the driver’s seat, though, it still feels a dinky car and the perfect foil for carving through city traffic. 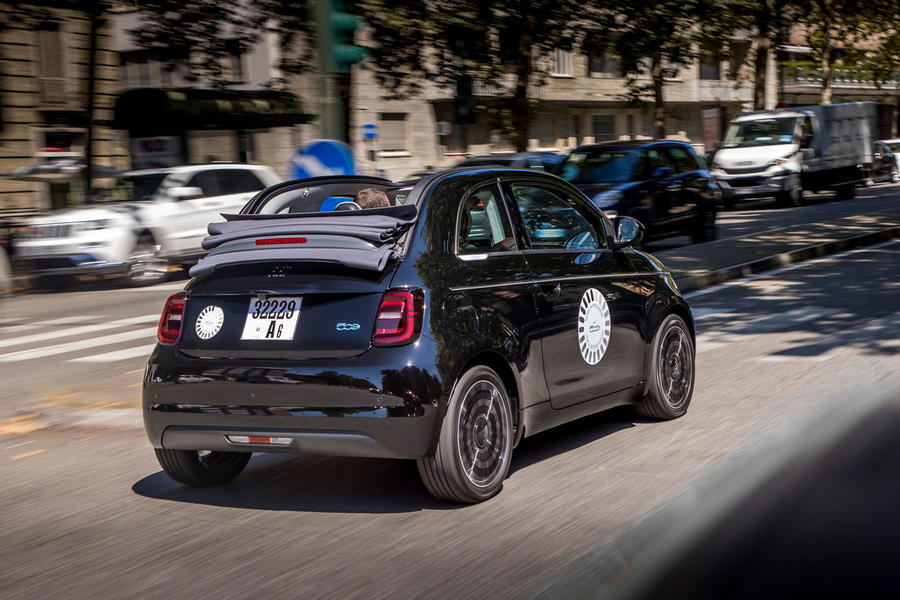 The driver’s seat in which we’re sitting is in a late prototype of the 500 Cabriolet ahead of the finished product, which we’ll drive next month and will reach the UK in January alongside the hardtop.

On our city-focused short drive around Turin and the surrounding area, we’re told not to pay much attention to the cabin plastics, infotainment software and calibration of the Level 2 automated safety systems, all of which will be tweaked pre-October. The rest, though, is fair game.

And it’s in that driver’s seat where you notice the first change: the improved driving position. You felt perched on the old 500, rather than sat in it, but it’s easier to find a comfortable driving position this time round, thanks to the better relationship between the seat, steering wheel and pedals. That said, seat comfort itself leaves something to be desired, even on a short drive, and the 500 still may prove not to be much of a motorway companion.

The cabin does feel roomier, though. There’s a touch more head room and shoulder room up front, plus more space for oddments, with a useful increase in clever, usable storage, although adult rear passengers won’t want to be in the car for more than a few minutes, because it’s tight back there. Boot space could be better, too, but then this is the Cabriolet model (with the same style of retractable roof as before), and it’s never going to swallow more than a couple of overnight bags.

Oddments stored, starter button hit, right pedal depressed and you wait for the sledgehammer, wheel-spinning, slightly nauseating instant torque that most electric cars from first-time electric car makers serve up. But it never arrives. Instead, you get something brisk but restrained; just enough, rather than too much. That also goes for the ‘in-gear’ performance off the line.

This is pleasing, for the 500 is likely to be just the kind of first-time electric car people buy because it’s a 500 and it just happens to be electric, rather than because it’s an electric car. That drive is delivered in near-silence, too, with the electric drivetrain nicely integrated into this very different kind of 500. It’s a smooth and refined car, then, which uses the benefits of electric drive and tailors them to the type of car they’re in rather than over-egging them.

Things are a little different when it comes to slowing down. There are three driving modes: Normal, Range and Sherpa, the last of which puts the car into maximum range-saving mode if you’ve run the battery down and are overcome with range anxiety so it should be little used.

Normal does what it says on the tin, with the 500 being driven as a two-pedal car. Range turns on the regenerative braking, making it a one-pedal car. It works well for the most part, but it seems to up the aggression below 5mph and brings the car to an abrupt and sometimes unwelcome halt. You learn to live with it travelling forwards, but it makes the 500 a frustrating car to reverse at a time when you’re naturally cautious anyway. You’re going slowly because you’re being careful, not because you want to have the anchors slammed on.

For the rest of the time, though, the 500 largely excels as a city car. The turning circle is excellent, direction changes are quick and keen, the steering is light (perhaps too light for some, but this is another area subject to a final software tune) and all-round visibility is good enough, so long as the pram roof isn’t fully down, when it blocks out the rear screen.

The ride is firm over Turin’s rather terrible road surfaces, but it’s never uncomfortable and still a step up from the brittleness of the current 500, likely helped by the extra weight of the battery between the axles. On the smooth, more highway-representative roads we briefly encounter at higher speeds, the 500 is competent and that firmness disappears. 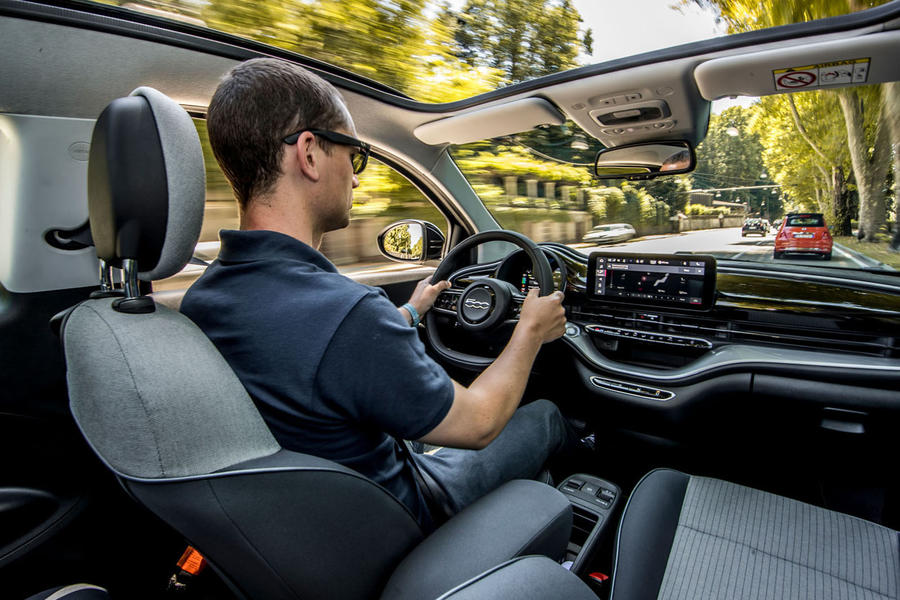 For a still-unfinished car, the new 500 already feels a remarkably complete product. The Turin drive showed a car of great potential, albeit one with question marks over it.

Pricing and specification are one of them. Both are as yet unknown, save for the £26,995 (after government grant) of a fully loaded La Prima launch edition. But an expected starting price of about £21,000 for the base car will usefully undercut its Mini and Honda rivals, before all of the cost of ownership benefits any electric car brings.

The interior trim and software remain to be seen, too. But the fundamental design and layout seem neat and tidy on first acquaintance and the new infotainment system, controlled through a large (10.25in) touchscreen, looks a vast upgrade on the current 500.

Get these right, iron out the regenerative braking issues and perhaps add a touch more heft to the steering and all signs point to a successful third coming of the 500. Electric or not, it feels exactly like a next-generation 500 should, chiselled and honed in the right way by respecting the past while still embracing the future. And just look at it: you’ll want to drive one and won’t be disappointed when you do so. 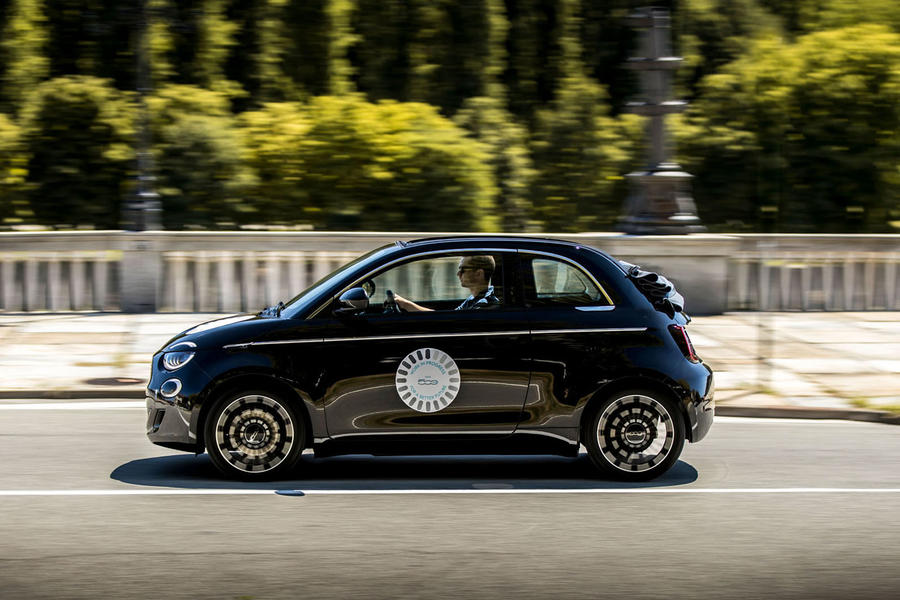 Log in or register to post comments
Ian Cutler 15 January 2022
We have a LaPrima, since August 21.. Plagued with issues, warning lights regarding tyre pressure monitor, audio failures, pedestrian warning sound barely audible or not working at all, e.call system failure, auto park brake/hill start fault, need to press "start" twice before it works and other issues such as serious grabbing from brakes when coming to a stop. The Fiat app doesn't work correctly, never has. Fiat customer service is abismal, non-existant and have no interest in it's customers whatsoever. We will go back to ICE vehicle soon. Thanks to Fiat failing to inject any enthusiasm into it's complaints procedure we will never buy another Fiat and I suggest others do the same
catnip 1 September 2020

I never really understood why

I never really understood why Fiat (and DS) went for this compromised convertible design. Why not keep the hatchback, and the rear vision, and have a full length opening fabric sunroof a la C2 and 108? Its a much simpler solution, and only loses you a few inches of rearward opening.

Good car if a tad to bigga battery for it's needs. As to Fiat they do not have a single car that appeals to me anymore, how the mighty have fallen