9
The best reason yet for families on a budget to flock to Dacia showrooms. A bit basic to drive but very versatile
Open gallery
Close

Another compact-class value champion from ascendent budget brand Dacia, and this time a bit of a versatility champion too. The Dacia Jogger is a smallish estate-cum-seven-seat MPV; an indirect replacement for the old Logan MCV in a way, but done with much greater individuality and charm.

We’ve already had a go in Europe, but with the UK launch of the car, Dacia has confirmed the numbers that matter most about it. They are £14,995 (the car’s scarcely believable entry-point showroom price) and £195 (the monthly outlay for which you can get one on a personal finance deal, after a deposit of… wait for it… £195).

In a market in which the compact MPV has faded into obscurity somewhat, this car stands to do rather well at that money, especially since it’s now almost impossible to find a seven-seat rival for it that costs less than about twice its price. If a regular Dacia supermini priced from £5995 was eye-catching back in 2013, I reckon a seven-seat family car priced like this one, coming along nearly a decade later, is just as attention-grabbing, especially given the cost-of-living situation that the UK is facing right now.

A car in this position doesn’t really need to be particularly well packaged, refined, versatile or nice to drive in order to find a receptive market; it probably just needs to exist. The Jogger, however, does quite a bit better than that.

It’s ostensibly a 4.5m-long, seven-seat family car built on a supermini platform, which is why Dacia can make the numbers for it add up. Underneath, it is the Renault-Nissan CMF-B supermini platform (which also underpins the Sandero, as well as the current Renault Clio). And while stretching a supermini platform to this size might seem like asking a lot of technology intended for lighter, leaner applications, it’s become a fairly common practice in budget models in recent years. From the Skoda Scala to the Peugeot 2008, via the Citroën C4, Fiat Tipo, Jeep Compass and even the latest Alfa Romeo Tonale (which, believe it or not, is based on a platform with roots as old as 2005), plenty of bigger cars now used modified supermini underpinnings.

The Jogger has a very simple showroom offering: for now there is one engine and transmission (although a hybrid version is coming in 2023), one bodystyle, three trim levels and six colours. The only option is a spare wheel.

Dacia’s rugged-looking, SUV-tough design makes the Jogger look part-MPV, part-crossover, which is only sensible given current market tastes. It’s a cheery, appealing design, and it’s contemporary too; not some 1990s monobox in hiking boots. And even the car’s most distinctive exterior features are functional ones. The chunky, stylised roof bars, which cleverly convert into a roof rack of their own, look great, while the car’s rising roof line (see where the upper window line kinks upwards at the B-pillar?) makes 40mm extra head room for rear-cabin passengers, and has subtle echoes of cars like the Matro Rancho. 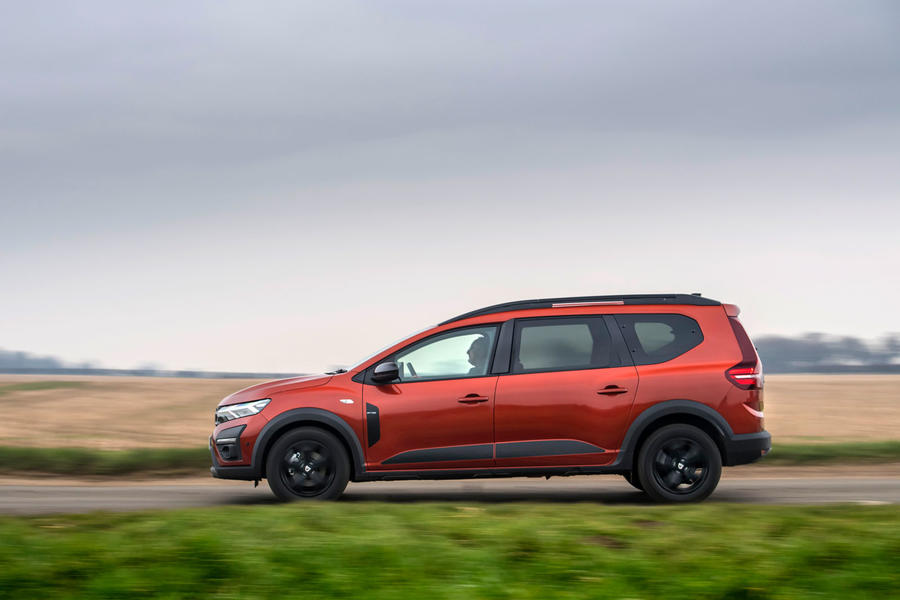 The Jogger’s interior is typically simple but not sparse- or particularly cheap-looking. Our mid-spec test car had some welcome cloth textile trim decoration on the fascia that matched the seat upholstery nicely and broke up the expanse of grey plastic well. While its dashboard mouldings were hard to the touch, they weren’t plain, shiny or objectionable at all.

Base-level Essential-trim models do without a central infotainment system, but they do get a neat dock for your smartphone, and offer a wireless link via which that phone can effectively serve as a de-facto audio and navigation system playing through the car’s four fitted stereo speakers. Our mid-spec test car had Dacia’s 8.0in touchscreen display, which offers wired smartphone mirroring for both Apple and Android handsets (wireless mirroring, factory navigation and a more powerful six-speaker audio set-up come on top-of-the-line Extreme SE models), and was simply laid out and easy to use.

Interior space is surprisingly good for a car that’s a couple of inches shorter at the kerb than the average seven-seater MPV: it’s just about adult-appropriate in the second row provided you’re not over six feet tall, and fit even for older kids in row three thanks to reasonable leg and head room (although there are no Isofix points back there, there are lights, cupholders and a 12V power socket).

Dacia adds versatility by making the third row fully removable (the seats lift out individually, and they’re genuinely light), and making the second one fold and pivot forwards around the leading edge of the seat bases, to open up a really big and useful cargo area of more than 1800 litres. The second row is split 60/40, with the single second-row passenger seat directly behind the driver’s seat (manna from heaven for UK flatpack furniture devotees). The only thing missing is a folding front passenger seatback, but they have remembered to put a neat ‘curry hook’ on the side of the front passenger footwell to keep your food upright on the way home from the takeaway. 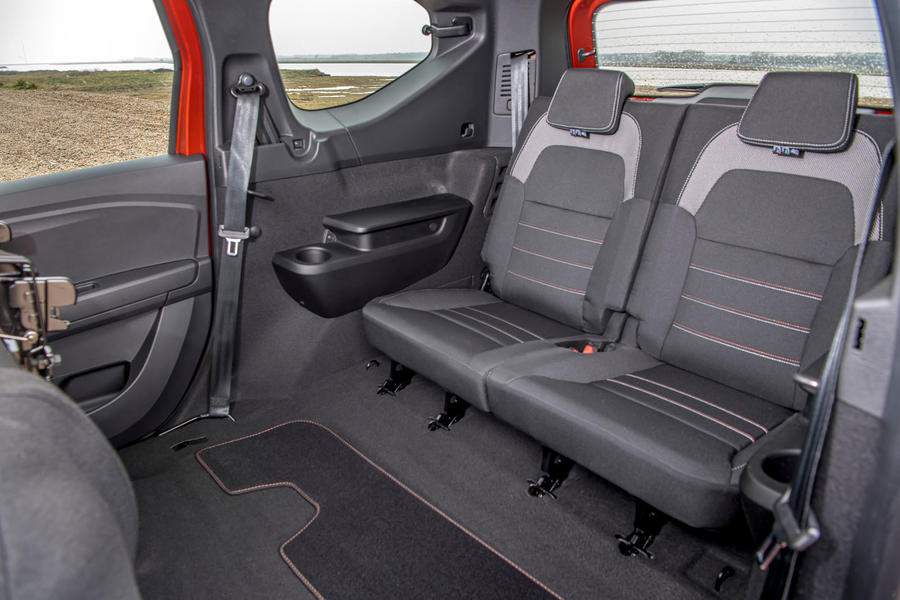 On the road, the Jogger escapes the austere feel you might expect of it by a distance in some ways, but less successfully in others. The 1.0-litre turbo petrol engine is quite refined at a cruise, if a bit rough around idle. It makes a surprisingly useful amount of mid-range torque, though, and returns 50mpg on the run pretty easily thanks to some long gear ratios.

That it delivers its torque in a bit of an unseemly surge makes the car feel rough-hewn at times; and it doesn’t like revving much beyond 5000rpm. But it works through a light, pleasant manual gearshift, and it provides more than adequate real-world performance and drivability for what might seem, on the face of it, like a big car for such a small engine.

The Jogger’s steering is mostly light, muted-feeling and medium-slow in its pacing. A little inconsistently weighted when it’s returning to centre, perhaps, and occasionally showing evidence of a smidgeon of torque steer - but it remains perfectly pleasant and inoffensive in daily driving.

The car’s outright grip level, on its 16in wheels, is only modest, but it’s assured enough at everyday speeds, and it allows the car’s body control to stay fairly neat and tidy when cornering. Complex surfaces can bring a little bit of fiddling clunkiness out of the suspension, particularly over sharper inputs - but bigger, longer-wave lumps and bumps are dealt with quite well, and at no point does the car’s ride feel limp or ill-controlled. Rather, there’s a nicely stout feel about the Jogger’s spring rates that makes it seem like a car you could load up with people and kit without risking scraping the door mirrors on the Tarmac around roundabouts. Something your passengers ought to be equally grateful for.

The Jogger is the kind of car that will appeal to families who didn’t imagine themselves interested in an MPV until they considered it; not least because they assumed they simply couldn’t afford to be.

There’s a versatility to it that is the perfect ally to its incredible value for money, and that you needn’t have an army of children to see sense in, which should really convince those who take an interest in it in the showroom.

But there’s some distinctive visual character and alternative charm about the car’s design, too; as if it were some extra-functional, seven-seat successor to the old Skoda Yeti, except one built in Romania rather than the Czech Republic.

No-frills family motoring has a new champion in this car - and there has seldom been one quite like the Jogger that’s more accessible in its pricing, more generous with its versatility, or more likeable in the simple freedoms that it provides. 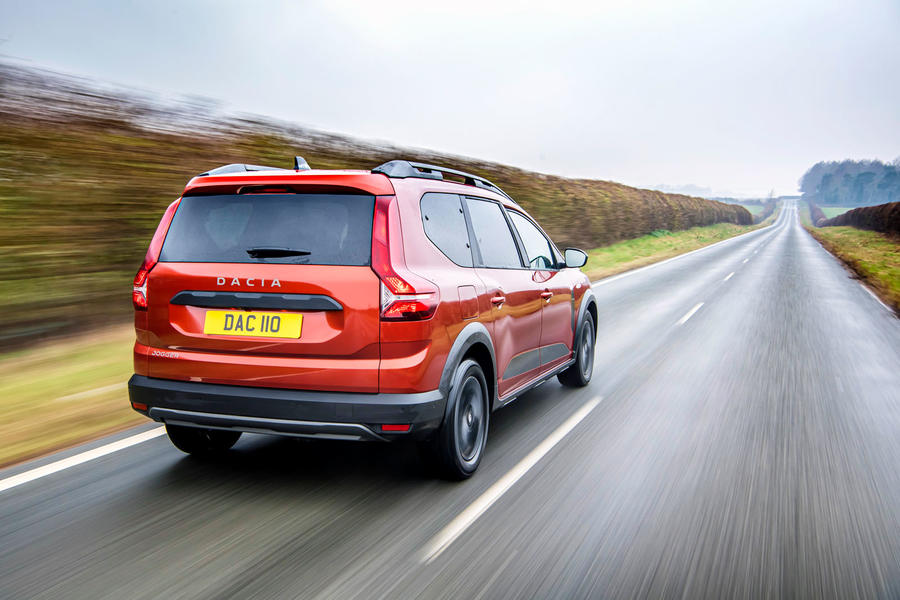 Think I'd wait for the NCAP report before making any decisions. Wouldn't want my car to fold up on me and the family durinf a crash regardless of how cheap it is.

The is the kind of car mainstream manufacturers should be making rather than bleating on about "going upmarket" all the time - leave that to Audi / Merc / BMW for badge snobs and start making truly affordable cars again.

Well done Dacia - I'll be popping down to the showroom soon.