From £39,0758
Good to drive for a tall SUV and a competent all-rounder, but Cupra has a long way to go to deliver on its promise
Open gallery
Close
by Dan Prosser
30 October 2018
Share

The arrival of the Cupra Ateca marks a significant moment for the Spanish arm of the VW Group as it delivers on a promise to promote Cupra from its position on the sidelines, as Seat’s performance division, to the more prominent role of standalone brand.

Cupra was first introduced in the mid-1990s and has since become synonymous with go-faster Seats, but from this moment on it will be recognised as a car maker in its own right. It isn’t just about performance; individuality and sophistication will also be core attributes, apparently.

At least, that is the ambition. Its first model is a 296bhp version of Seat’s SUV with uprated suspension and styling revisions. The new Cupra models will be built alongside their Seat counterparts at the Martorell factory on the outskirts of Barcelona and they will be sold through selected Seat dealerships, albeit by dedicated staff.

As is the way with the VW Group the Cupra Ateca is less a ground-up engineering exercise and more a cherry-picking one, for it plucks from the enormous VW Group toolkit every item of hardware that’s needed to turn a family SUV into a sporting one. The 2-litre turbo engine, seven-speed DSG gearbox, Haldex four-wheel drive system, MQB architecture and plenty more besides are all shared with other Seats, VWs, Skodas and Audis. Cupra is the first brand in the group to bring all of those bits and pieces together to build a fast SUV, but no individual element is in any way unique to the Ateca.

Why launch the new-look Cupra with an SUV? That’s where the volume is. For the time being, the Cupra Ateca is the only performance SUV in the sub-premium sector, which helps it stand out. Going where the volume is will undoubtedly be good for Cupra’s bottom line, but the risk is that people who really love driving and therefore wouldn’t consider an SUV of any sort are left wondering if Cupra in its new form is actually aimed at them at all. 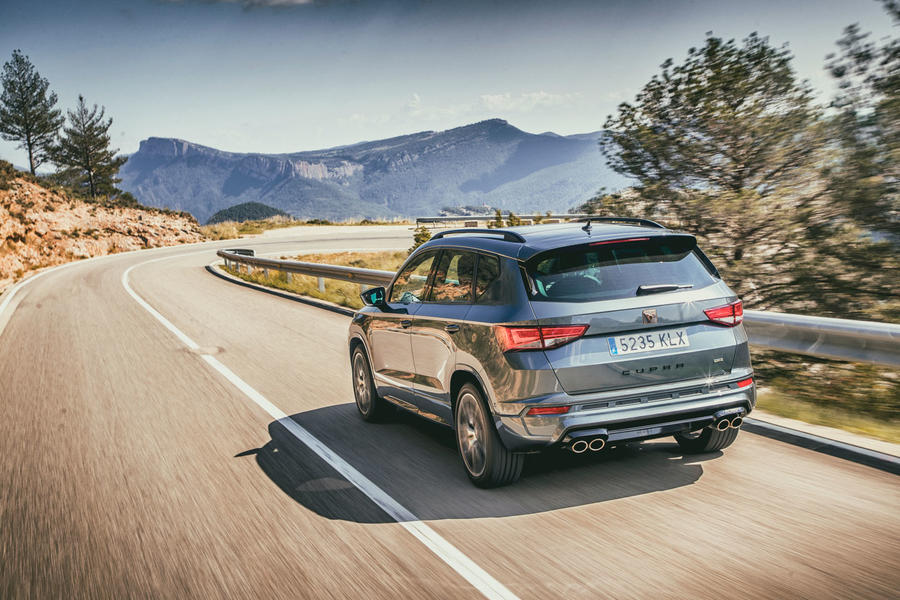 The Ateca’s cabin is solidly built, loaded with kit and it is spacious, too, while the digital instrument binnacle that is standard equipment does make the car feel like a high-end product.

The standard-fit seats offer only minimal support in cornering, which is a pity because the Ateca is good to drive on a winding road. With the Dynamic Chassis Control adaptive dampers (also standard-fit) in their firmest setting there is good body control and decent steering precision, so the car doesn’t heave and roll in bends the way a conventional SUV might.

A switch from Cupra into Comfort mode ensures the Ateca is refined and effortless in daily use, making no more demands of its driver than any other Ateca. Sitting 10mm closer to the road on retuned springs and dampers and 19in wheels, the ride quality will inevitably be more connected and less plush than a Seat Seat Ateca’s, but on smooth Spanish asphalt it was never at all harsh or uncomfortable.

The 296bhp, 2.0-litre petrol turbo engine is a familiar one these days and it is strong, responsive and energetic throughout the rev range. The seven-speed DSG gearbox is just as effective, being unobtrusive in auto mode and usefully snappy in manual mode - although other twin-clutch 'boxes are more urgent still.

Thanks to four-wheel drive the Ateca is sure-footed even when driven at its limits, which means you can hustle it along a mountain road without ever feeling as though you’ve overstepped the mark. As far as performance SUVs go, this is a very capable one. It does many of the basic things that any half-way decent performance car must do, which is to say it generates lots of grip and traction, it returns strong performance in a straight line, body control and steering precision are both good and it even looks suitably menacing in darker shades.

The trouble is, the Cupra Ateca doesn’t do a single thing that marks out a great performance car. Its steering isn’t brilliantly detailed or communicative. There is no adjustability in the chassis mid-corner. It doesn’t sound so evocative that you drive with the windows down wherever you go.

The body doesn’t remain so flat in corners that you think you’re driving a hot hatch. When all’s said and done, the Cupra Ateca is still a tall SUV. Better to think of it as a commendable all-rounder, then, and not a thrill-a-minute performance car. 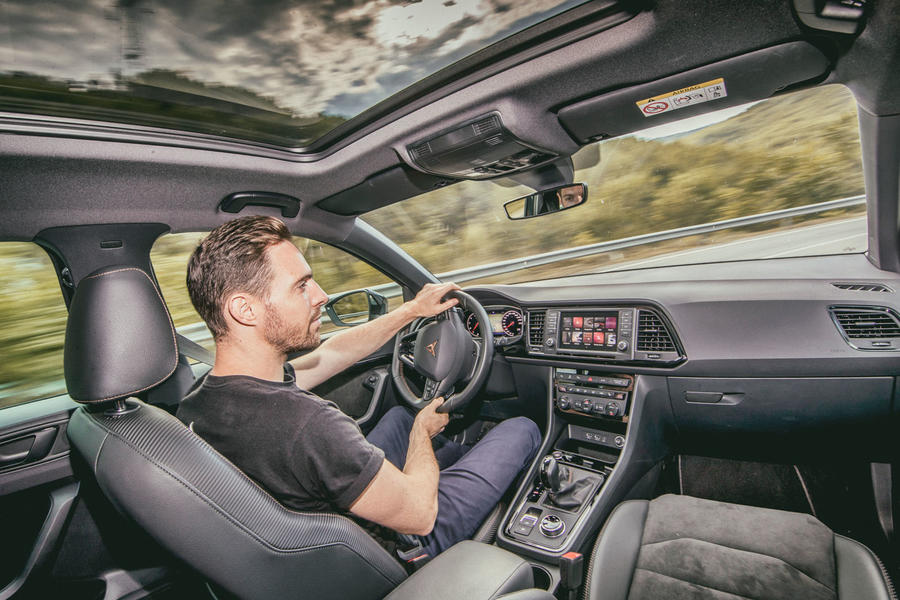 The Cupra Ateca starts at £35,900, while the optional Performance Pack, which adds bigger Brembo brakes and bucket seats, lifts that to a shade under £40,000.

The Cupra Ateca would be the ideal car for the family man or woman who isn’t yet ready to give up some level of performance and handling response. Because of its taller ride height, though, it cannot hope to be as involving or as rewarding to drive as a more outwardly sporty car. The next model in the Cupra era, the Seat Leon Cupra R ST estate (which will still be badged a Seat, unlike this Ateca) will almost certainly be faster, more engaging to drive and not a whole lot less usable.

Cupra’s graduation from performance division to independent brand will only begin to make sense to died-in-the-wool driving enthusiasts when it starts building Cupra-specific models, cars that are either not derived from existing Seats or would have been beyond the reach of a Seat sub-division. A Cupra-only model has been confirmed for late 2019, although there’s no indication yet exactly what that might be. A purpose-built Cupra sports car, meanwhile, is at best several years away. 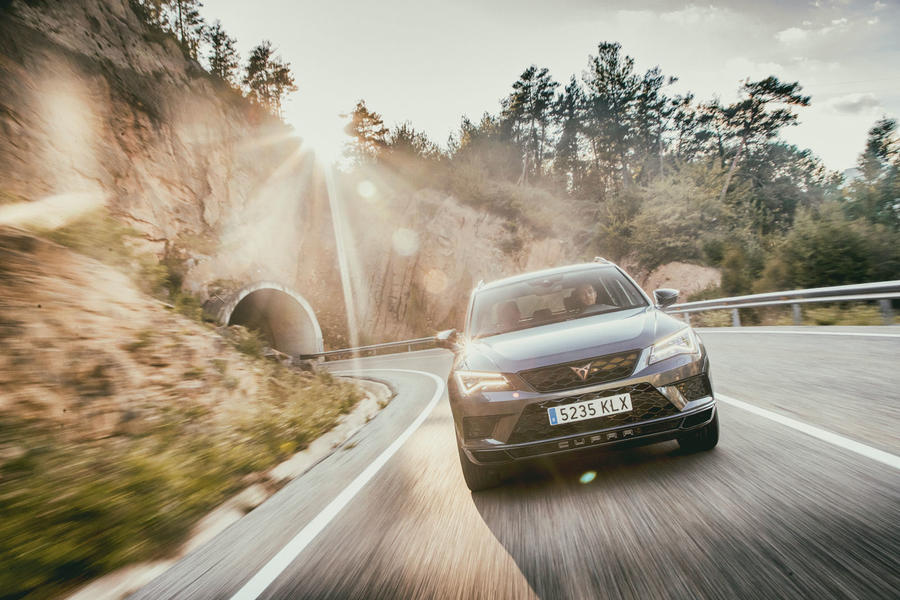 Four star rating for a three star review: must be VAG!

Like all VAG car reviews in a Haymarket publication, the atar rating and review content don't match.

It's obvious, if you read the full review, that it's a fairly mediocre vehicle.

But VAG spend a lot on advertising so here's an extra star or two to keep 'em sweet...

If it had a Fiat or Toyota or Nissan badge, it'd be a grudging 3 stars.

For Caravan Clubber in a

The encouraging thing for you re this post, is that future efforts can ONLY improve. Are you a child, let loose on a computer, while the adults are in another room?.

The encouraging thing for you re this post, is that future efforts can ONLY improve. Are you a child, let loose on a computer, while the adults are in another room?.

You sound like one of those humour bypass snowflake liberals... no antifa marches today?

"The next model in the Cupra era, the Seat Leon Cupra R ST estate (which will still be badged a Seat, unlike this Ateca) will almost certainly be faster, more engaging to drive and not a whole lot less usable."

How will this make any sense?  Seat will be undermining their new sporting sub-brand if they do this.