From £43,7708
M reprises the CS moniker for what could be its most exciting product in many years
Open gallery
Close

Occasionally, when test cars cannot for whatever reason be delivered to Autocar, road-testers are asked to collect directly from the manufacturer.

Far from being an inconvenience, these visits almost always throw up something interesting. That might be the sighting of an upcoming model still shielded from public view, or rival cars on site because the management is curious about the opposition. Once you’re through the gates, it pays to pay attention.

In the case of the BMW M2 CS – the third, possibly final and so far most unapologetic derivative of BMW’s finest current driving tool – it happened again. A visit to BMW UK HQ in Farnborough was my first chance to see the updated 5-Series in the metal (handsome as ever), and also the all-new 4-Series (worse than in the pictures), but that wasn’t all.

Sitting adjacent to the CS in the car park were an original 1973 3.0-litre CSL Batmobile and an M3 CSL. How very, very interesting. Two more covetable M-division road cars you’ll struggle to pin down. But equally, on the basis of the already stellar M2 Competition, would you really bet against the latest red-hot coupe from M sitting anything less than comfortably in its elders’ company, decades from now?

I'm not sure I would, though we’ll know for definite soon enough, not least via an exhaustive road test with telemetry. For now, this first drive on British roads ought to paint an adequate picture for those debating whether to meet the car’s eye-watering £75,320 asking price, which is some £23,000 more than the M2 Competition and puts the M2 CS directly up against the Porsche Cayman GT4.

On the subject of price, it's also impossible to ignore the fact you can now buy a scarcely driven example of the older but similarly conceived M4 CS – 10bhp more powerful, 5kg lighter, somehow, and ridiculously easy on the eye – for less than £55,000. Hmm.

Undoubtedly, BMW is asking for a fair chunk of money for a car that, unlike the historic icons found at UK HQ, doesn’t have an ‘L’ in its name, which in Munich is an alluring letter that represents added lightness and extra-specialness. At 1525kg (add 25kg for the dual-clutch gearbox), on paper the M2 CS is no lighter even than the M2 Competition it supposedly overrides, and this despite the fact the weight of the bonnet has been halved by the use of carbonfibre, which is also used for the roof panel, and the 19in wheels are forged and lighter than ever.

Perhaps weight has been fed back into the mix by the adoption of multi-mode adaptive suspension until now reserved for the M4, and the extra bodywork that apparently provides better stability at speeds approaching the car’s 174mph maximum. The M2 Competition already looks hammer-hard, but the CS gets an unmissable new front splitter, rear diffuser, gurney flap and bonnet vents, all of which are thrown into intimidating relief by our car’s Hockenheim Silver paint-job. It is fierce.

Finally, and unavailable on the M2 Competition, optionally you can have enormous carbon-ceramic brakes with juicy gold calipers for princely sum of £6250. These save 22kg (so the car you’re looking at actually weighs 1528kg) compared to the cast-iron M Sport setup, and give the heaviest hint at the car’s trackday-ready conception. 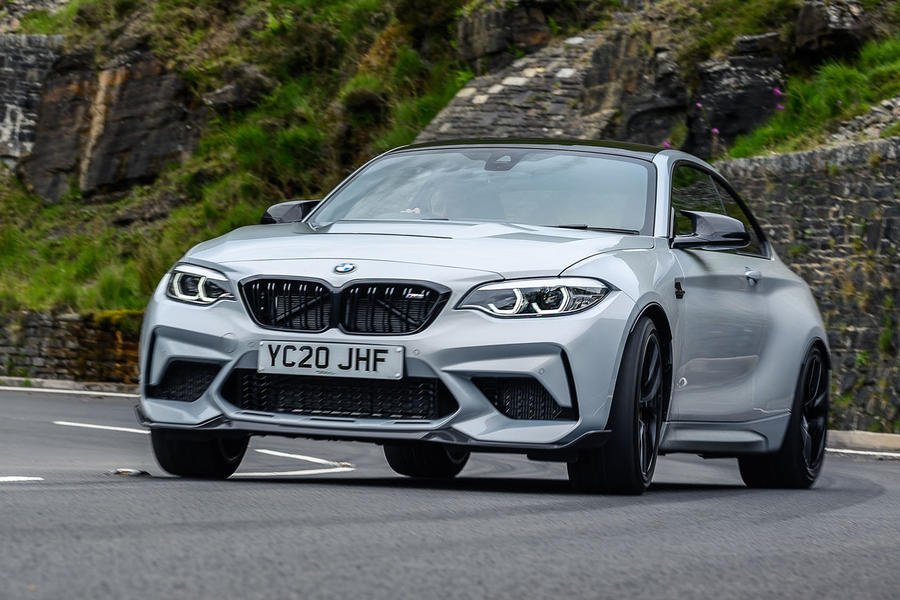 But what about the engine? This is the same BMW M4-sourced S55 twin-turbo straight-six used in the M2 Competition, albeit with a redesigned exhaust, more power and a marginally broader peak-torque band (though the hardware is still caged in by that glorious 1.5kg polished CFRP strut brace). It is an almighty thing – devoid of flab and almost pure muscle – though given the 444bhp and 407lb ft totals, it starts demurely enough, with rasping overtones that sound enjoyably motorsporty, pregnant with power and response, and suitably exotic.

The no-nonsense aura is mirrored in the low-speed ride. Slot the dual-clutch gearbox into Drive and there’s no creep, and when you do squeeze the throttle the M2 CS rolls forward with the airy effortlessness of a lighter car. Which, for all the reasons mentioned above, is rather unexpected. Thereafter the chassis labours the road surface in that prickly and alert but not uncomfortable manner serious drivers’ cars often exhibit. In short, first impressions are good.

But they're not perfect. As is often the case with BMW, the Alcantara-clad steering wheel is too generous both in diameter and especially in girth. And while they might have resisted fitting the slightly redundant – and therefore slightly cringe-worthy – door-pulls BMW found on the M3 and M4 CS, the central armrest has still disappeared. Given the car is no lighter than the M2 Competition, this is both pointless and inconvenient, though the broader issue is that the interior in general feels too familiar for the money being asked.

Barring some trim and badging, most of it is carried over wholesale from the M2 Competition, though of course this isn't all bad. The widely adjustable semi-buckets – now with lurid cut-outs – are as comfortable and supportive as ever. The driving position is also about as good as you could reasonably expect given the car’s compact, front-engined architecture. The gloss-carbonfibre swathed across the transmission tunnel will also appeal heavily to the 10-year-old in everybody, even though it’s so obviously superficial.

Move up through the gears and the M2 CS begins to feel every inch the machine with almost 300bhp per tonne. Even half-hearted overtakes are done and dusted in moments because the dual-clutch ’box is slick as hell (though sometimes jerky at crawling speeds) and the engine’s torque bomb is ready to go off in its entirety from around 2500rpm. You can sense this even if you’re not calling for every last pound-foot available, which only feeds into the car's aura.

Again, it's very much like the M2 Comp in this respect, and for the CS there's only 40bhp more power and almost no improvement in torque. And yet – the slightly firmer ride, slightly louder cabin and the meatier steering feel (probably due to the Michelin tyres) combine to dial up the intensity of the driving experience even at five-tenths, and even if you’ve got the adjustable parameters for the steering, engine and suspension responses (there are three settings for each) in their most conservative modes.

Admittedly, it's all pretty marginal, and to really feel the difference between Competition and CS you need to be, ahem, travelling somewhat. For the Compeition, BMW tamed the original M2's slightly hyperactive back axle with the help of a solidly mounted rear subframe and rose joints in the attached suspension, and as with that car the CS is immensely planted, only more so.

In fact, only at considerable speeds and on the cruellest B-roads does the taller body begin to feel its slightly saloon-y dimensions, taking a moment longer than, say, Porsche’s Cayman GT4 to take up what little slack there is in the suspension overs crests and so on. The rest of the time the CS will go down your favourite road with a level of capability approaching contempt.

The most tangible change is the way the new car gets into corners. Unlike the M2 CS racing car, which uses a purely mechanical Drexler limited-slip differential, the road car has the same Active M differential as the Competition, software tweaks notwithstanding. And unlike a traditional LSD, the Active M diff remains fully open at the point of turn-in, so along with the Michelin tyres and that iron-clad body control, the CS gets its nose into corners with astonishing precision and agility. And yet it isn't so sharp that the rear axle being to feel nervous.

And, once you're into the corner, this is just another brilliant M2. The car will slide predictably, endlessly, enjoyably and just plain beautifully, but only if you want it to. The M Dynamic Mode setting in the ESP is also nicely tuned, giving the driver plenty of freedom if they want it. The control and consistency in the delivery of power and torque through the rear tyres, plus the accuracy of the light steering and balance of the chassis, make driving the car hard an uncomplicated joy.

Something like the Cayman GT4 (or any Cayman, for that matter) is more subtly adjustable off the throttle, and less reliant on conspicuously firm suspension, but for power-on front-engine-rear-drive dynamics, the M2 is possibly the best car in the world. 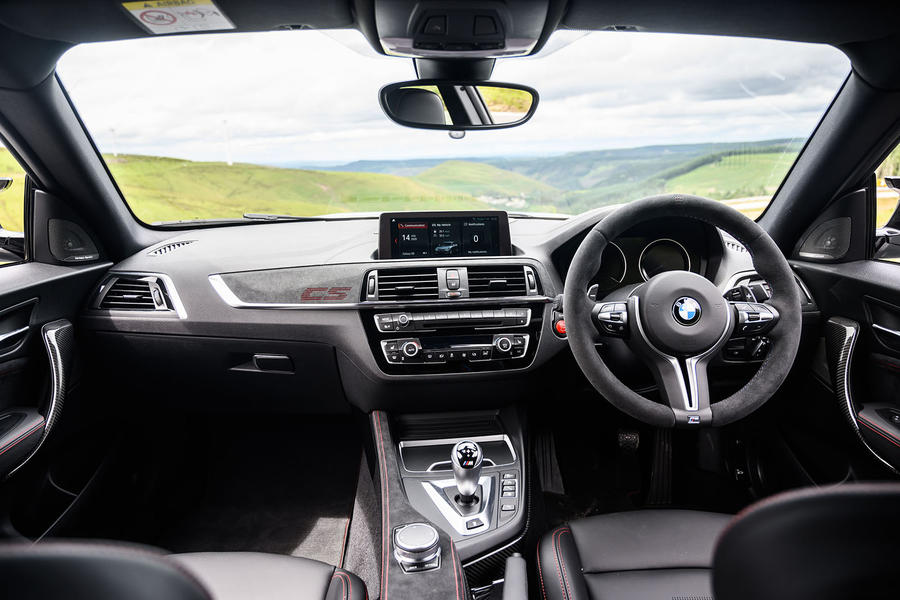 And this is the thing. Had BMW plonked down the M2 CS out of nowhere and simply said ‘It’s £75,000, take it or leave it’, we’d have cracked out the calculators. This is a sensationally good car to drive on the road, and one that doesn’t come apart on the track.

What you might understandably struggle with is the premium over the existing M2 Competition. That car lacks the more hardcore derivative’s brutal agility but gives nothing away in terms of fun and satisfaction. In fact, on the road, the ‘lesser’ car is actually the more expressive, usable and therefore likeable device – plus it gets the same magnificent and highly developed engine.

Obviously people who do regular trackdays will see slightly things differently, and it’s on circuit that the CS will hit its fast and playful stride.

But even so: it’s difficult to escape the feeling of what might have been. Had BMW found a way to chase 110kg out of the car with intelligence and engineering guile, as it did for the E46 M3 CSL, it might have created something markedly different to the M2 Competition, something even more capable and quick than this M2 CS on track, and therefore something that fully justified the £23,000 mark-up. Something like an M2 CSL.

As it is, the new BMW M2 CS flirts with the strange classification of being an utterly brilliant disappointment. 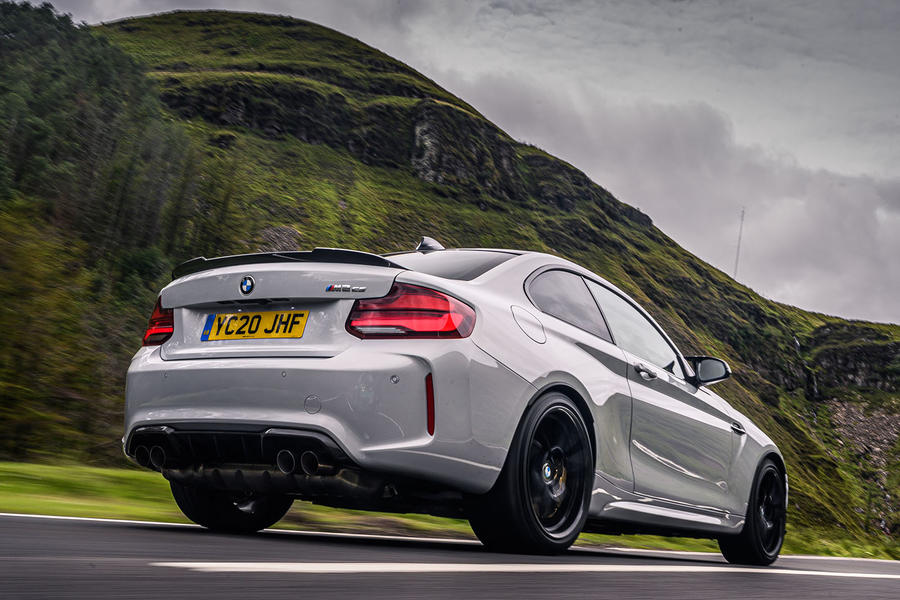 I'm currently weighing up buying an M2 Competition, and for a lot less money than the £73K~£75K CS, I can buy a low mileage, used M2 Competition, take it to Litchfield Motors, and give it 540bhp, uprated brakes (not carbon ceramic - but easily up to track day use), uprated suspension, and an uprated exhaust.

Yes the insurance would be higher (non-standard, modified car), and yes the car will not hold it's value as well as a factory CS car, but when you're out driving the car, and matey boy in his £73K CS is struggling to keep up with that "lesser,older Competition" model on a twisty road, not knowing that he's almost 100bhp down on power on the old car, none of that will matter!

For that price you can get a very nice V8 supercharged F-Type P450AWD, why have 4 or 6 cylinders when you can have 8

How low could it go?

Call me cynical but the answer is 'no lower'. Much like the Cayman platform could usurp the 911, so could the M2 usurp the M3/M4.