The US may be a bit of a shambles at present, but at least when it comes to cars - and specifically the type of fuel that goes into them - Americans are united in their preferences. Petrol, unleaded, gasoline: so long as it isn’t diesel, they’ll generally be pretty happy.

Audi claims that this is why it has ditched the mighty oil-burning V8 of its SQ7 in favour of the twin-turbocharged 4.0-litre petrol V8 that appears in everything from Audi’s own RS models to the Bentley Continental GT and more in between.

Supposedly the Americans just prefer it that way - although it does seem to contradict Audi’s recent efforts to shift all its S-badged executive models to diesel power. Perhaps that move will be reversed in time too - not that Audi admitted to anything when we asked the question.

Despite coming in a slightly detuned form to what you would find in the Audi RSQ8 or Porsche Cayenne Turbo, the SQ7’s V8 isn’t short on power. It develops a heady 500bhp at and 568lb ft between 2000-4100rpm, all of which is deployed to all four wheels via an eight-speed automatic gearbox.

There’s all-wheel steering fitted as standard, while 48V active roll control and an Audi Sport rear differential are available optionally. Oh, and there are still enough seats for seven people. 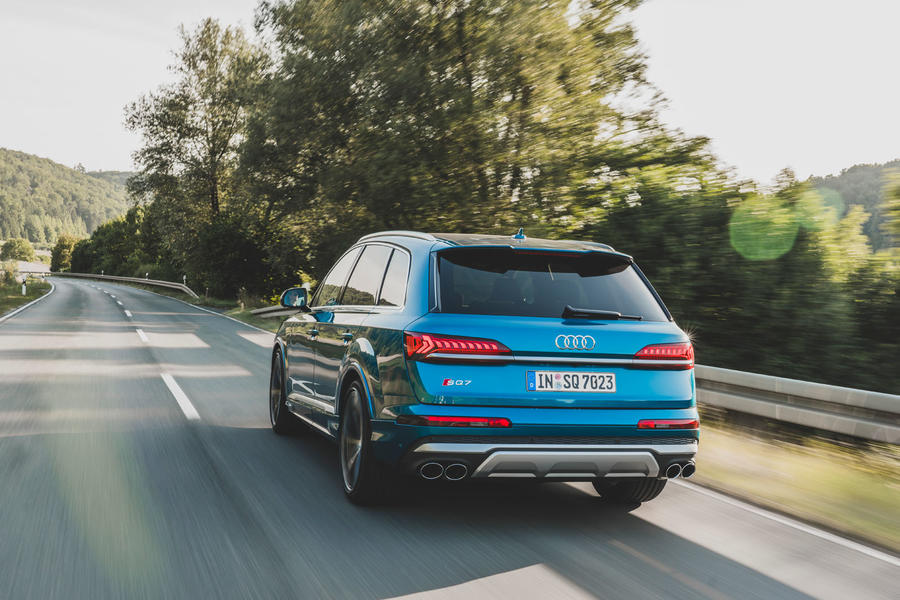 On unnaturally smooth German roads, the SQ7 combines all of this to fairly tremendous effect. Rolling refinement and ride comfort on air suspension and 22in alloy wheels are practically immaculate, with the only notable intrusion being a very slight, very distant shuddering over lumpier surfaces at low speeds. Wind noise at pace is virtually non-existent, as is road roar - although whether this would continue to be the case on coarser British roads remains to be seen.

Nevertheless, there’s a tremendously pillowy character to manner in which the SQ7 deals with rolling, flowing road surfaces. It smothers compressions while assertively remaining in control of its vertical movements, and secondary impacts barely register. It's a supremely comfortable car, one that shrinks long distances to such an extent that it feels like it would be capable of making a 10-hour stint at the wheel feel no more taxing than a quick trip down the road.

The cabin is as plush and accommodating as you would expect that of a large Audi to be. There’s masses of adjustment in both the seat and the steering column and visibility is good. And aside from a few slightly naff carbonfibre inlays on the dashboard and around the tops of the doors, the general look of the cabin is pretty smart, too, in the fairly sober, slightly monochrome way that seems to define the bigger, pricier Audis these days.

Of course there’s loads of room in the second row, and if you slide that middle bench forwards, there’s enough in the third row to house two adults in reasonable comfort over shorter distances. Getting in and out is a bit of a process, mind, so it’s probably an idea to limber up a bit before attempting to clamber in.

Elsewhere, the dual touchscreens for the infotainment system look sharp and respond well enough (although they’re still a bit fiddly to operate while driving) and the optional Bang & Olufsen stereo sounds fantastic.

Unsurprisingly, the SQ7 is also seriously quick. Get the revs up past 2500rpm, wait a fraction while the turbo boost picks up and you will find yourself surging towards the horizon on a tsunami of torque and V8 thunder. What's surprising, however, is that the SQ7 seems to make a bit more of a point about the fact that it actually has a petrol V8 under its bonnet than some of its RS-badged stablemates.

This could well be my imagination getting away from me, but when you pin the throttle in Dynamic mode, you seem to be a bit more comprehensively immersed in its bassy, growling soundtrack than you are in, say, the RS6 Avant or RS7 Sportback. Maybe you just notice it more in a car that doesn’t look quite as outlandish as those models. In any case, it’s great to see the SQ7’s Q-car credentials are still in place - even if some might argue that they aren’t quite as strong as they were when diesel power was the order of the day.

Despite weighing 2265kg, the SQ7 handles its mass through fast corners, too. Dial the active anti-roll bars up to Dynamic mode and you can feel them working to keep the SQ7 level. (The difference between driving modes is surprisingly pointed.) The steering is nicely paced, and the manner in which it weights up and lets you know how the tyres are loading up beneath you really inspires confidence.

Of course, with so much mass and quite a lot of girth, faster driving isn’t quite the SQ7’s forte, but with immense levels of traction and a handling balance that’s predominantly neutral (you can make it rotate a bit if you provoke it), it’s not quite the sweaty, physically exhausting process you might expect it be. Well, it isn’t on wider, well-sighted roads, anyway. 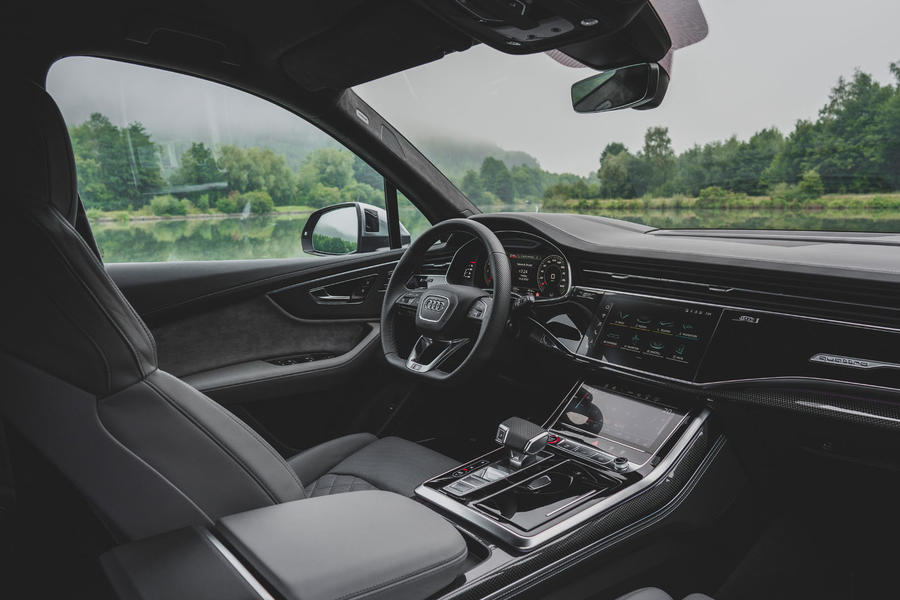 At £78,190, the SQ7 also makes a pretty strong case for itself as a value proposition - if such a thing can really exist at this end of the market. A V8-engined Porsche Cayenne GTS practically costs £7000 more, and while the BMW X5 M50i is fractionally cheaper, it’s not available with a third row of seating.

The nearest BMW SUV with a petrol V8 and seven seats as standard is the X7 M50i, which will set you back at least £92,975. And while the £75,060 Mercedes-AMG GLE 53 does come with seven seats, its six-cylinder mild-hybrid motor isn’t quite as special as the Audi’s, and it doesn't quite as comfortably either.

As excessive as a 500bhp, seven-seat SUV undoubtedly is, it’s impossible not to be taken by the sheer breadth of the SQ7’s talent. On the one hand, it’s a phenomenally capable and extremely refined long-distance tourer; on the other, it has the pace, the grip and the control to amuse and entertain when the road ahead gets a bit more interesting. The fact that it can do all of this and still have room to comfortably accommodate a family of seven (or a group of six adults) helps to add a further bit of additional justification to its existence, too.

Just be sure that you can stomach its regained appetite for fuel. We saw just 15mpg over the course of our test route, which is a wee way off the 24.1mpg average we got from the diesel when we road-tested it back in 2016. 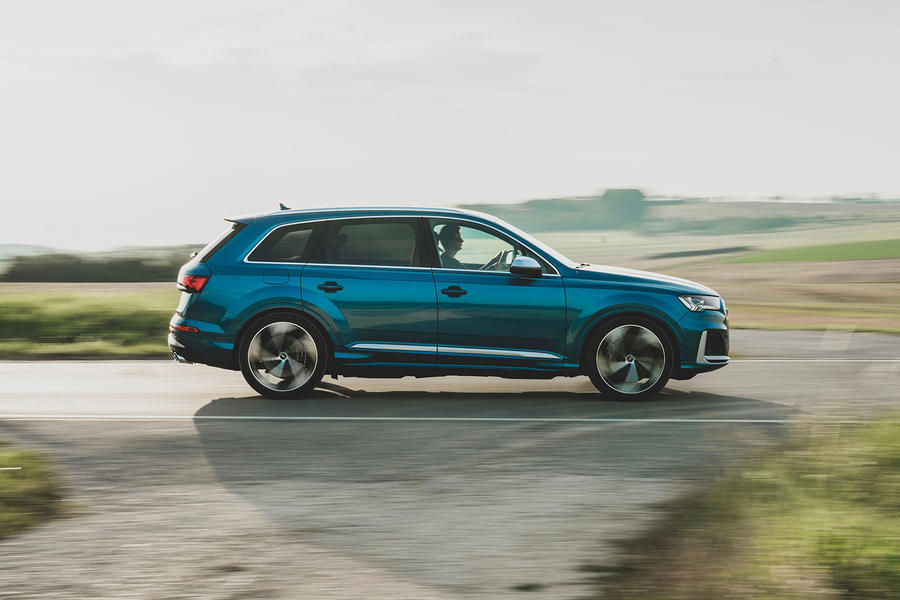 yes its stupid. There are Q7

yes its stupid. There are Q7's less thirsty to do the same job so this is a bit stupid really.

and in no where ever is an 2.2 tonne suv remotly offering driving fun

note - expense, size, weight, power, torque - these do not make a car fun. youll never have a more pure thrilling drive than a 1.6 caterham

I thought these sorts of cars should be on their way out not on their way in.  Really these cars become not only more stupid as time goes on but really ought to be legislated out of existence

I thought these sorts of cars should be on their way out not on their way in.  Really these cars become not only more stupid as time goes on but really ought to be legislated out of existence

Stupid? Why? Educate yourself - all cars, ICE or EV, are hugely wasteful purchase decisions - their manufacture, consumption, and disposal are all hugely wasteful - with battery disposal en masse still unknown we don't even know if the slightly less ineffecient EVs are really less of a waste. Let's at least have some fun while we count down our years until the real panademic hits...

15mpg. Jeez. For a car that will spend most of its time mooching about, maybe with only one occupant on board, that's pretty awful.