From £137,6958
Bentley takes its first steps into the world of the sport utility vehicle
Open gallery
Close

An entirely new direction for Bentley - although this new SUV, the Bentayga, certainly still looks like a Bentley. Whether it feels like one or not we’ll come to in a moment, but for now, no question, aesthetically it has the cues.

The strong rear haunch, the diamond grilling on the front: I'm no arbiter of a car’s appearance (for which Bentley should probably be grateful), but if the task was to make it look instantly recognisable, the first job is done.

The Bentayga is an example of how gracefully Bentley’s model line-up has evolved since Volkswagen took ownership of the company in 1998. You can think of it as only the third ‘new’ model to have arrived since: if, like I do, you count the Mulsanne as a replacement for the Arnage, and thus the Flying Spur saloon and Continental coupé/convertible as the other two ‘new’ model lines.

This is at least as significant as those two: an example of the motor industry's overdue recognition that people who have an awful lot of money do not necessarily want to be constantly photographed driving a supercar or mistaken for an airport limousine driver. So they buy Range Rovers specified to the heavens - a fact Land Rover recently seems to have appreciated, too.

I’ve often wondered how far up the food chain the limits of SUVs run, and have suspected it’s quite a lot further even than this £160,200 Bentayga. I suppose Rolls-Royce will find out soon enough.

Meantime, though, the Bentley. Like the Flying Spur and Continental before it, it takes full advantage of Volkswagen Group’s ownership of the British firm. Beneath it is, ostensibly, the new MLB-Evo architecture that also underpins Audi’s flagship SUV, the Q7 – a car whose price has dipped into six figures, if you remember. And it’s a car that is already pretty vast, so at 5.14m long the Bentayga isn’t that much bigger again. At nearly three metres, the wheelbase is within 2mm of the Q7's and the Bentley will later offer seven seats - though there are no more than five for now.

Coming later too will be hybrid and diesel powerplants, but sensibly enough, from the start Bentley is only offering what’ll be the top-spec motor (until a Speed edition arrives): a new variant of the 6.0-litre W12 engine. Because, let’s face it, if you’ve a car with a 2420kg kerb weight and yet, because you’re Bentley, you want it to reach 60mph in 4.0sec and a top speed of 187mph, you’re going to need 12 cylinders and two turbochargers.

If that sounds thirsty, it is. There’s cylinder shut-down and this new unit is 30kg lighter than its predecessor, but still it only returns 21.6mpg on the combined cycle and emits 297g/km of CO2. During its day with us, although I’ll concede we drove it pretty hard, it returned little more than half of the combined figure.

Those aren’t the kinds of numbers that Bentley would rather you focused on. Instead, try some of these: there are 17 standard, 90 extended paint colours (and any other on request); there are 15 standard leather hide colours to choose from and seven different species of veneer. Again, if you want more, just ask. Our test car rolled up with £48,000 worth of options, which would by no means be an unusual order. 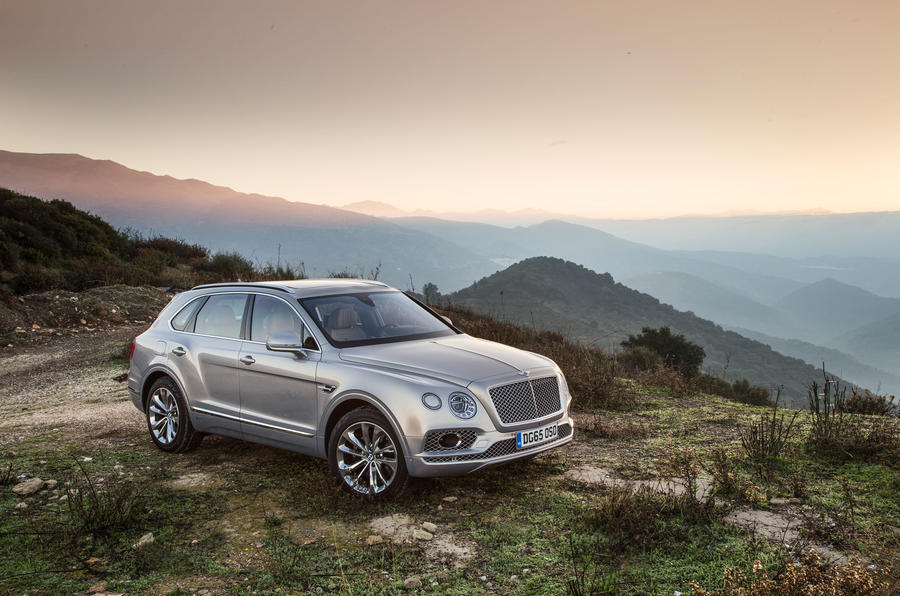 Inside there are a few cues that this is a VW Group model, but no more than you’ll find in a Continental – and the Bentayga benefits here from being based on the latest VW architecture.

Instead of the chunky old gearlever that occupies about a third of the transmission tunnel, the new electronic controller for the eight-speed transmission leaves more room around it for additional switches and convenience features. Ditto the steering wheel still gets gearbox override paddles, but as in a Volkswagen or Audi they’re small and rotate with the wheel, rather than being the fixed, railway signal box-specification levers of the Conti.

There’s a digital display between the two analogue dials and the part touchscreen, part dial-controlled entertainment system – while still not our first choice set-up in the whole of motordom – has a level of ease and functionality like no Bentley before it.

If you’re accustomed to the Mercedes-Benz/Audi rotary dial on the transmission tunnel, though, you’ll instead reach accidentally for what turns out to be the drive controller.

The Bentayga gets four on-road drive modes and four off-road ones, for the air suspension and four-wheel drive transmission with Torsen centre differential. We started out with good intentions to try both, but in the end only managed the on-road stuff; probably a not unfamiliar tale for Bentaygas in the years to come. A fuller off-road test will follow.

The suspension is by air as standard. It provides the kind of isolation we’ve come to expect, with the very occasional echoey ‘bong’ over sharp surface ripples but an otherwise composed and particularly serene waft. It doesn’t matter that much whether you’re in Comfort or Sport (or the default, ‘Bentley’) on the dial, because it’s never over-firm thanks to a new system of which Bentley is rightly pretty proud.

The electrics are by a 48V system because the Bentayga gets active anti-roll bars and the extra juice is needed to make them respond with suitable vigour and speed. There are electric actuators that act to stiffen or loosen the anti-roll bars depending on what you’re doing, so on a straight they’re slack and loose and allow lots of wheel deflection, while in a corner they quickly stiffen to reduce body roll and keep the movements of what is, let’s face it, quite a big body, in check. It works with remarkable effect, feeling better to me than adaptive damping, which stiffen the dampers come the corners but unsettles the ride more in the process.

The Bentley, then, feels pretty natural, retaining its comfort while simply adding additional control when it needs it to the way it goes down the road. There’s remarkably little roll and when, if pushed, it eases into relatively early understeer, you look at the leather and veneer, the turned aluminium air vents and their organ stop adjusters, and just remind yourself that you’re in a Bentley, not a Porsche Cayenne.

Having a W12 engine – no matter how compact in theory it is – in the nose presumably does little for the agility, but it does lots for the performance. The torque curve peaks at 664lb ft at 1350rpm and stays there until 4000rpm. Peak power, 600bhp, is through 5000-6000rpm, although there’s relatively little point taking the engine all the way there.

At lower throttle inputs and revs it’s smooth enough, but revved harder it fails to sound particularly special or expensive. Bentley hasn’t said whether the V8, so good in the Continental, will find a home here too (because it’s quite busy selling the first couple of years of W12 production, so why would it?), but the Bentayga wouldn’t hurt for a bit more 'woofle'.

There’s also – and I’m being picky here, but this is a £160,000 car so we can afford to be – the occasional snatch in the drivetrain. Perhaps it’s the gearbox’s ‘coasting’ modes, which disconnect the engine from the transmission when under no load in order to improve economy. But when it takes it up again it’s not always seamless.

I am being picky. By and large this is an exceptionally comfortable, and always impeccably quiet, big SUV. Drive it smoothly and it’ll reward you with its oily smooth electric steering - a good speed, and with servotronic so it quickens towards the limits of its lock - its calmed ride and a really impressive sense of cabin isolation. 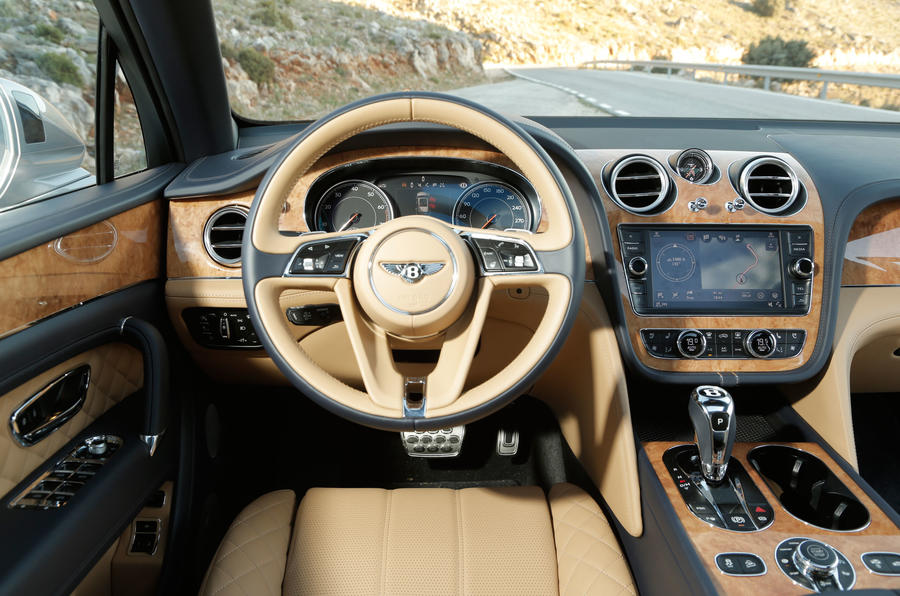 I can see why you would. The Bentayga ably fills one of the widest remits a manufacturer has ever set itself. Bentley has established a reputation as a maker of sporting cars that must also be luxurious. It’s hard enough in itself to make a luxury saloon that can do the thick end of 200mph in safety and security while fulfilling the ‘luxury’ part of the tag.

Now throw on top of those demands the additional need for this vehicle to travel, as it will be asked to, into sand dunes or across frozen steppe, or to tow several tonnes of horse and trailer, and you start to appreciate the task Bentley has set itself.

It would, presumably, have been rather easier if it didn’t have to worry about the whole 187mph thing as well, but it’s to its great credit that it hasn’t. I’d think that, in all of motoring, only the Porsche Cayenne and some variants of the Range Rover Sport get set a remit you’d consider as broad as the Bentayga’s – and the Bentley has to achieve it with the trappings of all that wood, aluminium and leather while it’s doing it, too. No wonder it took them a while to get around to it. In the end, though, it was well worth the wait. 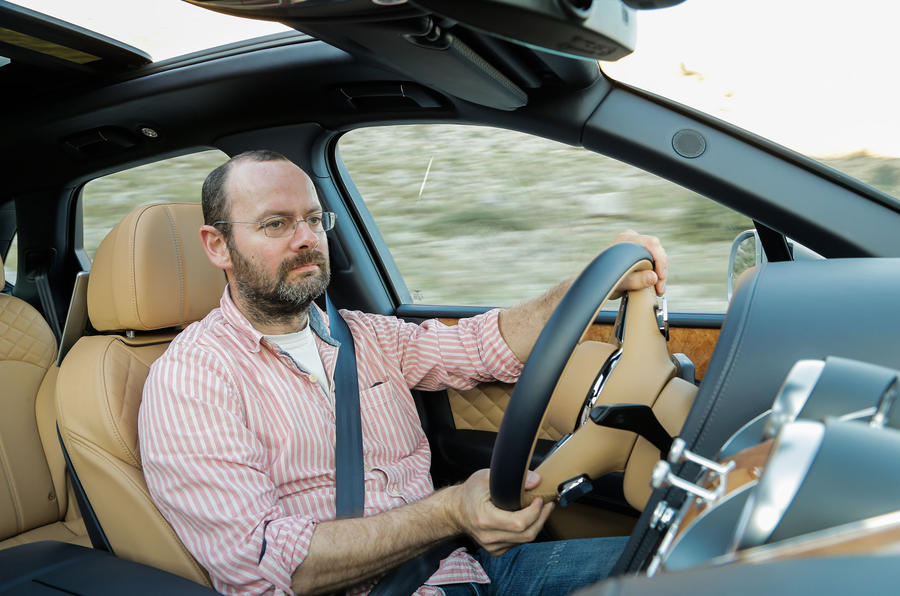 Autocar's Doug Revolta discusses the new Bentayga with Bentley's head of product marketing Marcus Abbott in the video below.

And here, we sit down with Bentayga product line director Peter Guest.

that's had food thrown down it. Hideous, garish, and blingy. And what's with all the plastic covers in the engine bay, are they ashamed of the W12 or what?
winniethewoo 18 November 2015

that's had food thrown down it. Hideous, garish, and blingy. And what's with all the plastic covers in the engine bay, are they ashamed of the W12 or what?

So perfect for the clientele its aimed at! I am sure the people wanting classy and timeless would go for a RR.

Bentley used to make cars for

Bentley used to make cars for gentlemen of means and taste, who might spend a huge amount of money on a Speed Six or R-Type Continental, but would go shooting off-road in a bang-about Alvis woodie or something similar. Now Bentley makes cars for people who care about little more than that it should be very expensive, and look it. Well, the Bentayga does look it, on the inside, but the outside has only sheer size to make you think it costs a lot. But if you HKLP, that probably doesn't matter, you can after all see the badges easily enough. If I ever got into car sales, it would have to be classics, one meet a much better class of person. Probably pre-war classics, so as to avoid the people who collect Ferraris the way they collect trophy wives. I enjoyed the article but, in the phrase "adding additional control", the middle word may be deleted to the benefit of humanity.
Andrew Lee 17 November 2015

If I REALLY wanted a f***-off 4WD, an Escalade would be a more honest option. And the smaller Cadillac SUV (name escapes me) a more handsome one.
View all comments (18)