From £47,8757
New engine adds to S5’s appeal but not by enough to counter the claims of rivals. A fast and precise-handling coupé but wants for real driver engagement
Open gallery
Close

The Audi S5: for now at least, the top-of-the-range medium-hot performance version of the new A5 coupé. With two doors, four seats, a longways engine, permanent centre diff-based quattro four-wheel drive and a torquey turbocharged engine, it’s a car made to a time-honoured mechanical template for Audi. Although it’s powered by six cylinders rather than five, this is the closest thing to a classic 1980s Ur-Quattro that the firm currently makes. And given that people who are in the market for a fast coupé like this are probably just the right age to remember the 1980s with particular fondness, that may not turn out to be an entirely irrelevant factor for wannabe S5 owners.

For this new version, Audi has moved from supercharged V6 to turbocharged V6 power and, having already made weight savings in the A5’s basic construction, has also made gains on both power and torque. The car doesn’t quite come into the niche in an outstanding position on outright potency, though, thanks to the recent introduction of the bigger-hitting Mercedes-AMG  C43 Coupé. And yet it certainly has enough grunt to get your attention: 349bhp, 369lb ft and the potential for 0-62mph in less than five seconds. 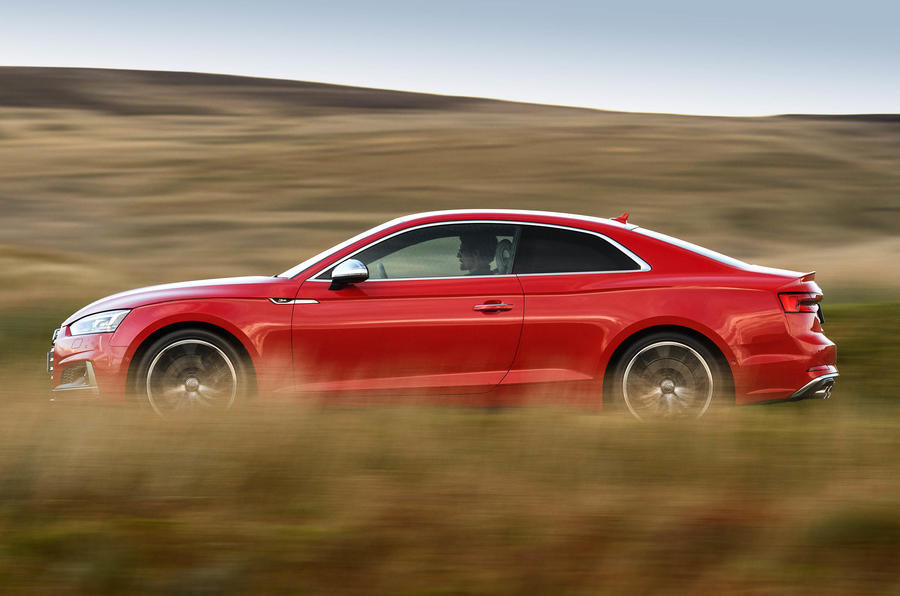 The S5 also gets its own suspension specification and tune, riding lower still than even sports-sprung versions of the standard A5. But here, Audi’s trick is to mix in greater comfort, refinement and civility than you might get in a more powerful RS model, as well as plenty of dynamic purpose.

Impressive technical and material specification and advanced onboard technology are also very much part of the modern Audi S-car’s appeal, with the S5 getting LED headlights, heated nappa leather sports seats and an MMI Navigation Plus infotainment system as standard.

But just like most of their fellow Audi buyers, S5 customers should still expect to find budget to spend a few thousand pounds on options. Adaptively damped suspension, active-ratio ‘dynamic’ steering, a mechanically locking sport rear differential and Audi’s impressive Virtual Cockpit digital instruments are all cost options – and having all four will inflate the cost of what’s already a relatively expensive car by more than £3000. 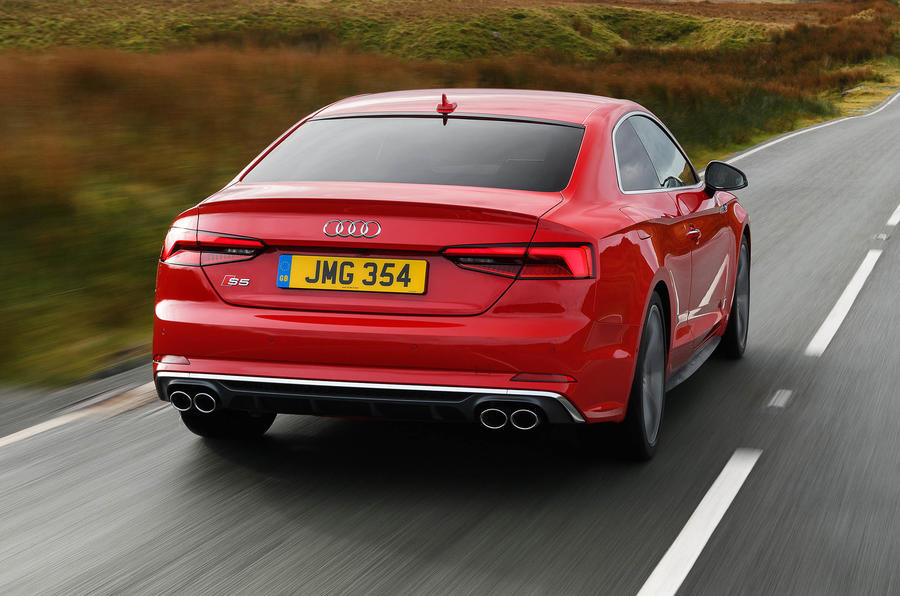 Fast but not feral, precise-handling but settled and secure, gently sonorous at times but a long way from demonstratively noisy. Just a little bit exciting, then. but never so much as to risk being even vaguely wearing.

The car’s interior sets the tone for the driving experience to come. Ahead of the B-pillar, there’s little that sets the A5’s cabin apart from that of the A4 saloon, but you’re definitely aware of the relatively low driving position of the S5. The car’s mix of cabin materials is a bit subdued, but the quality with which they’re deployed and finished is nothing short of spectacular.

The car’s driver’s seat, meanwhile, was a little narrow for this tester but softly upholstered, nicely supportive and comfortable. Behind it, occupant space is respectable - but don’t expect to carry fully grown adults very far in the back. A C-Class Coupé is probably marginally more accommodating. But then again, if you’re buying the coupé version of this car rather than the forthcoming Sportback, you probably won’t find that too much of an imposition.

The V6 announces itself quite clearly and tunefully around town but fades into the background as your speeds increase – only raising its voice after a downshift and a short charge at the redline. Even in a lower-order performance machine, you’d say it could afford to be a bit more effusive. 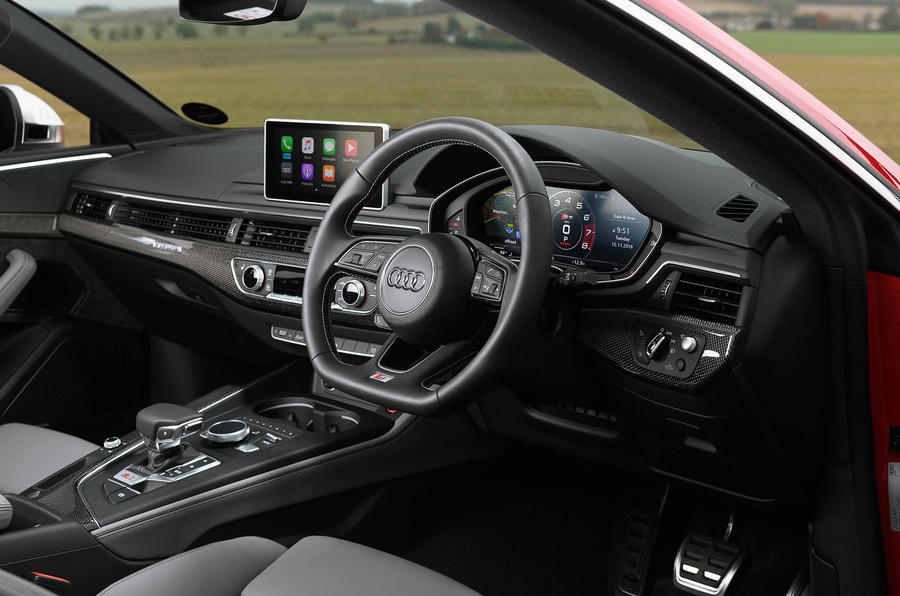 There’s a hint of softness to the accelerator pedal response, no doubt caused by the combination of turbocharged engine and torque converter automatic gearbox, but it only delays the S5 for an instant. Torque builds much more quickly than from the last S5’s supercharged motor, and the new car feels brisk straight from the off.

You’ll need to lock the car in manual mode to get a clear sense of the engine’s full combustive range; leave it in ‘D’ and the eight-speed gearbox has the same propensity to downshift with almost every accelerator pedal movement that characterises so many modern cars. But locked in third gear, you’ll feel the engine knuckle down quickly from low revs. It goes slightly flat through the upper-middle part of the tacho’s scale, only to find its breath again over the last 1000rpm of the rev range.

So the motor is a worthwhile improvement over what it replaces but doesn’t always combine brilliantly with the eight-speed gearbox. Overall, we suspect petrolheads will still narrowly prefer either Mercedes-AMG’s new 3.0-litre turbo V6 or BMW’s longer-serving 3.0-litre straight six.

The S5’s chassis, meanwhile, seems to do 90% of what most owners will desire of it very proficiently – but it isn’t a natural entertainer. Even with Audi’s optional sport rear differential, our test car wasn’t particularly poised or engaging when cornering, although it was always grippy, precise and sure-footed.

The car rides quite well: better, in our limited test experience thus far, than any sports-sprung standard A5. It’s fairly firm but deals with uneven surfaces well enough to make it a credible grand tourer. At least, it does with Audi’s optional adaptive dampers fitted. They have Comfort, Auto and Dynamic modes, and we preferred the last of those three on the road because it improves close body control without making the eventual compromise harsh or fidgeting. The ride feels under-damped in Comfort, simply allowing the car’s body to heave rather than creating much useful additional compliance.

Audi’s dynamic steering continues to be an obstacle to your enjoyment of the driving experience because it makes the amount of weight and control feedback through the wheel vary widely. By increasing the steering’s directness at low speeds, it can also make the S5 tricky to place at junctions and around roundabouts. At A-road and motorway pace it works well enough, though, but before actively avoiding it, we’d strongly advise you try the car’s standard passive steering set-up. 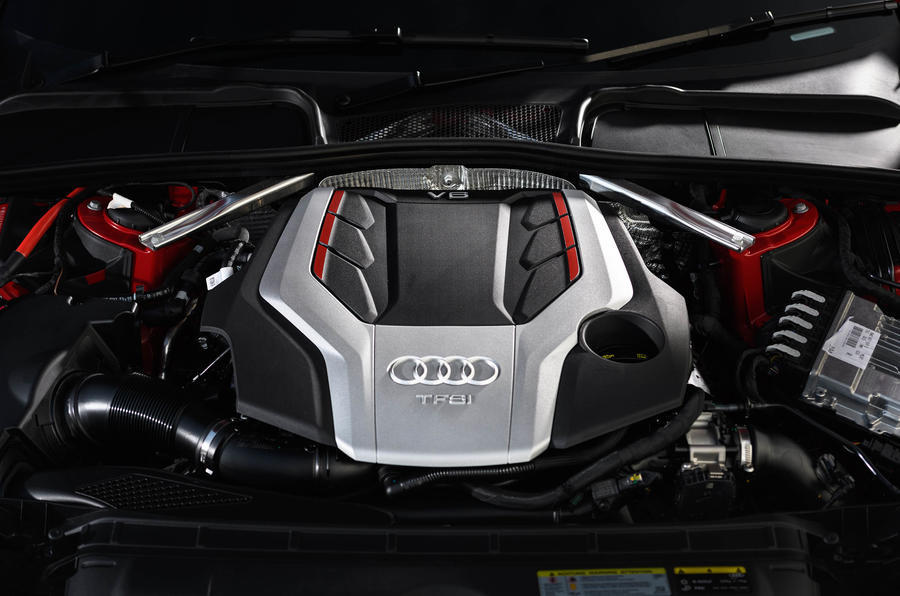 There’s a convincing case here for anyone looking for a usable, stylish, brisk and unimposing luxury coupé with a smidgeon of sporting edge – but those hoping for real involvement from their daily driver should shop elsewhere.

Although its ride shows evidence of a skilled finish, the S5’s handling isn’t as natural, balanced or compelling as rivals, some of which show that greater excitement can be delivered with little or no compromise to comfort or all-weather stability.

In future, Audi probably needs to do more with its S-branded cars to successfully counter the threat posed by Mercedes-AMG's more engaging 43-badged lower-order saloons and coupés. If it can, this performance niche’s newly competitive forces might yet bring us a worthy successor to the original 1980s Quattro – but they haven't done so for now.

Who cares how it drives?

£47k for this - the review reads like it's a dull car nothing particularly exciting or fun about it. It's quick but has flat spots by the sound of it. Must be better ways of spending that type of money on a car..