It doesn’t seem all that long ago that the Audi S4 was powered by a 4.2-litre, 339bhp V8. In fact, it wasn’t all that long ago that all of Audi’s S-badged models seemed to be using engines that would look preposterous by today’s standards. Just look at the old C6-generation S6; that had a massive 5.2-litre, 429bhp Lamborghini-derived V10 at its nose, and even then it wasn’t the fastest or most powerful version you could buy at the time.

How times have changed. These beguiling engines have now largely disappeared from Audi’s range of S cars, and even some of the ‘halo’ RS models have been shorn of a few cylinders. Take the current RS4 and RS5, for instance - in a previous life, both of these cars were champions of the naturally aspirated V8. Now, not so much.

That, however, is the way of the world. Attitudes change and priorities shift - and cars will inevitably change along with them. That’s why, under the bonnet of this new S4, you’ll find a 3.0-litre V6 diesel engine supplemented by a 48V mild-hybrid system, as opposed to a revised version of its predecessor’s 3.0-litre V6 petrol. It’s a move we’ve seen Audi make with updated versions of its other S-badged models too: the new S6 and S7 are now all fuelled from the black pump; while the recently launched SQ8 makes use of the 4.0-litre V8 diesel that will also appear in the soon-to-be-reintroduced SQ7. All of those cars feature some form of mild-hybridisation, too. The recently announced S8 seems to be the only new S-model to retain a heavy-hitting petrol motor, in European markets anyway.

Given the air of negativity that has surrounded oil-burning motors since the Dieselgate scandal broke back in 2015, Audi’s decision to redefine its middleweight performance range as it has is a bit of an eyebrow-raiser. One engineer said the move was based on the fact there’s still a strong level of demand for used examples of the first-generation SQ5 - which was the first Audi S model to feature a diesel motor, remember. Supposedly customers love the blend of performance and economy they offer, so the decision was made to roll similar engines out across the wider range.

While this might certainly be a contributing factor, I’m not sure it’s the sole reason. Tightening emissions regulations must have something to do with it. And considering cars such as the RS4 and RS5 now make use of smaller engines than they were a few generations ago, perhaps diesel is a way of further differentiating these halo products from the lower-order S cars. 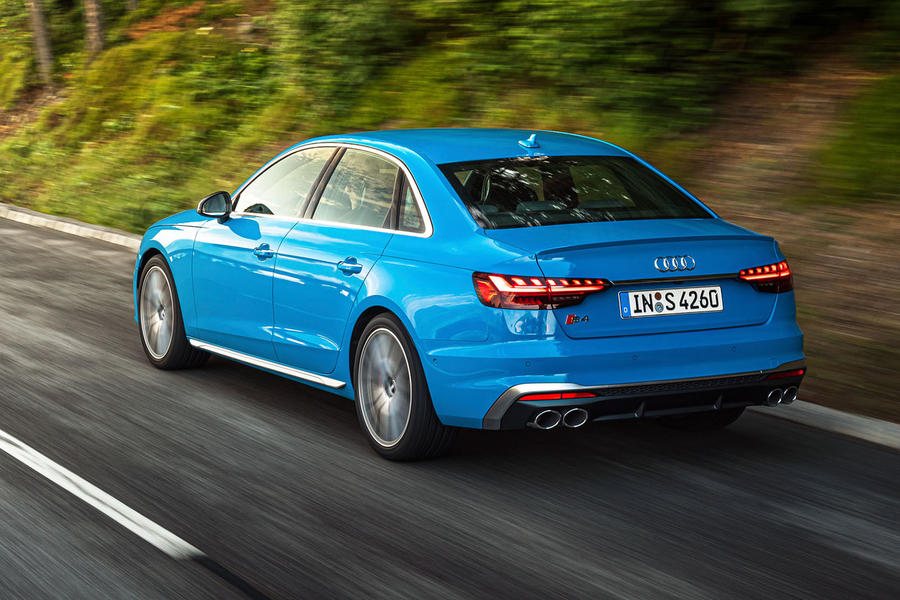 Regardless of the motive, there’s little denying the fact this new S4 packs quite a wallop. That 3.0-litre V6 diesel kicks out 342bhp and a whopping 516lb ft of torque, which is spread across a relatively narrow 2500-3100rpm window. For the sake of comparison, that’s the same amount of torque as a Mercedes-AMG C 63 S Coupé gets from its 4.0-litre, twin-turbocharged V8. In typical Audi fashion, this performance is directed to all four wheels via an eight-speed auto ’box and a self-locking diff that can funnel up to 85% of that torque to the rear axle.

While I don’t doubt the S4 is more than capable of hitting its claimed 0-62mph time of 4.8sec, it’s the way it accelerates while locked in-gear that’s the most entertaining aspect of its character. Put your foot down below 2000rpm and the pace will gradually start to pick up but, as soon as you stray past that 2500rpm marker, things get a lot more brutal. The accelerative force that’s unleashed is lahar-like; a sudden violent surge accompanied by a muscular, bassy (if a little faux-sounding) bellow from the V6. It might be fleeting but, for that short moment it exists, it’s undoubtedly thrilling.

Its versatility is readily apparent too. Point the S4 down a stretch of motorway and not only is that motor impressively hushed, its claimed WLTP fuel economy figure of 42.2mpg means it should provide decent range between trips to the petrol station.

Sitting on lowered sports suspension, the S4’s ride is noticeably firmer than that of its A4 counterpart, even with its dampers in their comfiest, most pliant setting. That said, the manner in which it navigates poorly surfaced roads isn’t so brittle you’d wince at the prospect of driving one over long distances. It's a settled, well-sorted car, this.

It grips tenaciously through corners too, although you can still get its rear end to step out with some well-timed throttle inputs. In Dynamic mode, the steering does have an artificial sense of weight about it, but for the most part it allows you to steer the car in a confident, assertive manner. Its response rate quickens as your speed increases too, which can be a touch unsettling at first but doesn’t take long to get your head around. It’s a bit disheartening, if not at all surprising, to find there’s little feedback to be gleaned here, though. 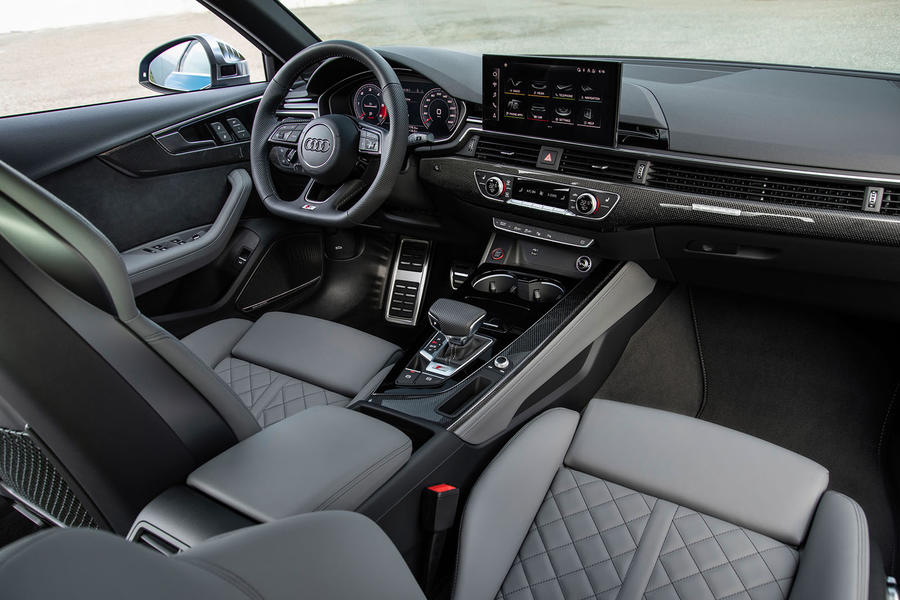 Early drives of the latest-generation BMW M340i xDrive suggest Munich’s competitor will remain the enthusiast’s go-to choice in the segment. The ferocious nature of the Mercedes-AMG C43’s twin-turbo V6 petrol will be a draw for some, too.

But there’s plenty to like about this new S4, even if it’s perhaps not the most inspirational car to drive hard. Its hybridised diesel engine makes it something of an oddity in the fast compact executive class, but it also lends the Audi an impressive breadth of ability; it’s both a refined motorway cruiser and an exceptionally fast car to point down a B-road. A refreshed cabin, with Audi’s latest 10.1in MMI+ touchscreen infotainment system and virtual cockpit as standard, also helps to give it a welcome boost on the technological appeal front.

Some may be turned off by the idea of forking out upwards of £48,000 for a diesel-powered performance saloon. But if that engineer was right about demand for those used SQ5s, this new S4 could prove to be really rather popular. Time will no doubt tell. 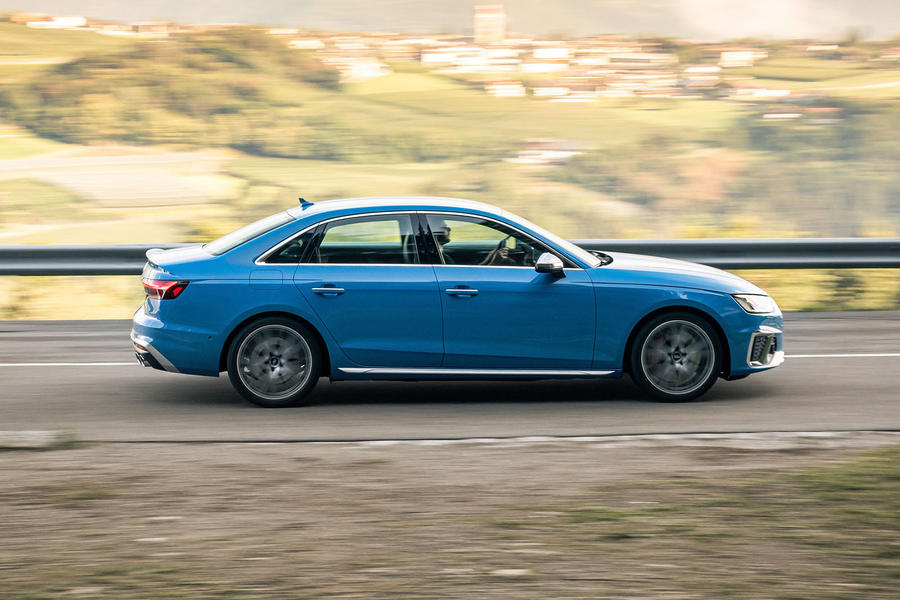 I'd be open-minded enough to try the engine, that much torque should be interesting even though I've never gone for the black stuff in the past.

But lately their auto-boxes keep getting described as sluggish which is not what you want.

The fake exhaust tips are rubbish on a 50k 'sports' car, and the ipad glued to the dash design is serious dated... on the whole I think no.

Hurry up BMW and get the M340i on the market

Always liked the S4 and have owned a few but can’t get my head round this. Would be great if they offered the North American petrol version as well so European customers could choose.