Anyone who's been waiting for just the right opportunity to announce his own Patridgian command of the history of the BMW 3 Series may know the gospel truth on this one, and so I stand to be corrected, commenters.

But now may very well be the first time since 1977 that BMW finds itself without a rear-driven, straight six petrol-powered version of the 3 Series with which to tempt self-confessed petrolheads and aspiring executive managers alike.

Does that seem as odd to you as it does to me? And might it put off a few keener drivers shopping at the upper end of the model range? 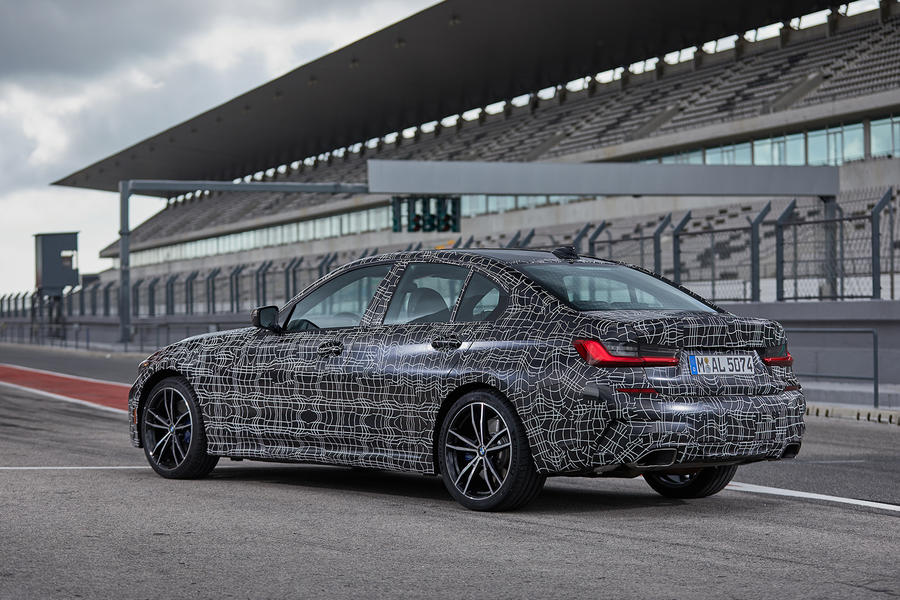 Previous test experience suggests the 255bhp turbocharged four-pot in the 330i is certainly no second-rate motor, and neither, for that matter, will the diesel straight-six in the 330d be.

Even so, you can’t help feeling that there’s something about the enduring driver appeal of the 3 Series that has for so long depended – at an increasingly rarified level perhaps, but nonetheless at some level – on the combination of ‘standard drive’ and an equally powerful and smooth inline six-cylinder petrol engine. And that something would seem to heap rather a lot of pressure on the M340i xDrive - soon to become, for a few years at least, the headline M Performance act in the 3 Series range - to really deliver as a driver’s car.

The M340i xDrive won’t join the range until the middle of next year, but BMW allowed us to sample it in as-good-as-finished prototype form at the 3 Series’ international press launch recently. And guess what? There’s nothing to worry after all. Clearly not at all by coincidence, this is a four-wheel-drive 3 Series that handles with all the balance, poise and throttle adjustability that you would expect of a rear-driven one.

Having already shown that four-wheel drive needn’t be the slightest barrier to the vivid enjoyment of its full-fat M Division cars, BMW is now doing the same with some of its one-rung-lower M Performance models. These cars might not have dedicated 2WD modes, unlike the current M5, but if the new M340i’s any guide, they won’t need them.

Using a retuned version of the B58 engine developing 369bhp and 369lb ft of torque, the M340i gets the full gamut of BMW’s M Sport suspension, steering and braking modifications as standard, as well as the electronic locking rear differential that’s an option on the less powerful 330i and 330d.

Adaptive M Sport suspension is an option, too, with BMW’s new ‘lift-related’ dampers being standard. Our prototype had the former, although we were only permitted to drive it on circuit at Portimão, and so impressions of how much the adaptive dampers might improve the 3 Series’ ride comfort will have to come later. 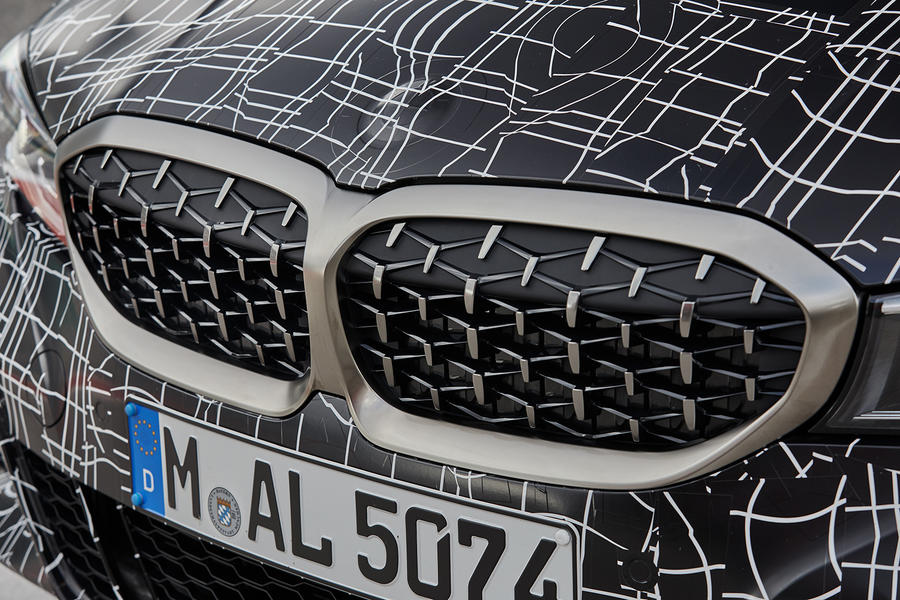 And while we're addressing that topic: BMW UK has yet to confirm which of the G20's wheel-and-suspension combinations will come with run-flat tyres, but while bigger-rimmed M Sport 3 Series models have tended to come with run-flats as standard in recent years, M Performance models have dodged them. Our test prototype wore Michelin Pilot Sport 4S tyres.

The M340i’s variable-ratio steering system feels much more subtle and consistent in operation than the previous-generation 3 Series' equivalent one. There’s little, if any, of the usual sense of over-assistance these systems often need in order to cover for an increasingly direct steering ratio, and so you get a useful impression of front-axle grip level through the rim and can steer the car naturally and instinctively, rather than second-guessing it through tighter bends.

On track, the car’s inherent cornering balance shows a little bit more stability bias on turn-in than you might expect of something powerful and strictly rear-drive, like the last 340i. Its mid-corner attitude becomes readily adjustable with power once about a quarter-turn of steering angle is applied, however, with the lion’s share of engine torque plainly being kept at the rear wheels by the xDrive system, at least until the same amount of corrective lock is needed on corner exit.

You don’t experience the usual rush to channel torque to the front wheels just after the car’s attitude progresses beyond neutral here, which some modern four-wheel drive systems still seem to have. All of which is just another way of explaining that you can drift yourself happy in an M340i, 4WD or otherwise.

Along with BMW’s engine overhaul has come a harder-edged and more purposeful tone for this car’s straight six, of which it’s easy to approve, and a fairly urgent and accessible turn of speed that is unlikely to leave many wanting.

The M340i is a pretty heavy car by 3 Series standards. Although it corners with remarkable poise and immediacy, those adaptive dampers struggle a little to control its weight through bigger compressions (at least with true fluency), and so body control gets just a touch jittery under real examination. Away from the track and out on the road, where those dampers will be given so much more to do, that might translate into a less than perfect sense of poise. We’ll see.

The car’s CV as a really engaging sports saloon is otherwise very complete, however. And so if you don’t want to wait for a full-fat M3, or even for an Alpina B3, for a 3 Series that feels really special to drive, perhaps you needn’t.

It's funny to think that it has already been nearly seven years since BMW introduced the M Performance sub-brand and yet there’s never been an M Performance version of its biggest-selling global model. Well, it looks as if Munich is about to remedy that situation in some style. 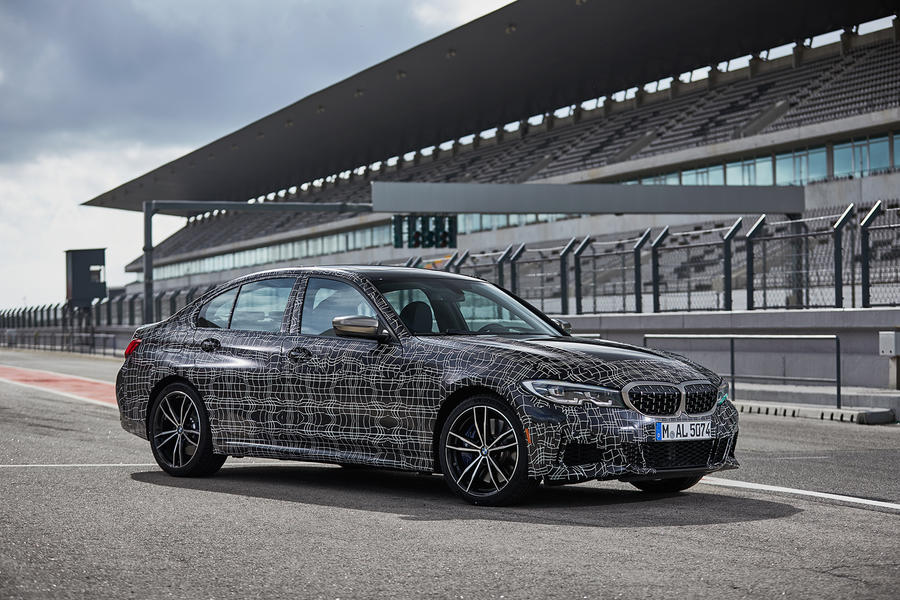 Any student who would like to compose a dissertation on midwifery 360assignments may benefit from this list. Preparing the dissertation is a standout task that needs a true outcome, experience, and comprehensive research in accordance with the requirements to acquire the final level.

Autocar - sort this out

Autocar need to get a moderator on their comment page urgently as there are more and more scammers and rogues like ninatorres advertising dodgy essay writing crap when they cannot even string a sentence together! Not to mention christeena who again can barely speak English but seems to want you click on a link that will no doubt relieve you of your bank account details. Sort this out Autocar - by allowing these thieves and fraudsters on your site with impunity you are complicit in their dishonesty and treating your readers with contempt. Get these idiots off your site.

Suspension version will be representative of a tiny  % of production cars and as rare as hens teeth.