8
Mainstream EV is quick, agile and terrifically refined, as well as having a roomy interior, excellent versatility and an impressive range
Open gallery
Close

The Q4 E-tron couldn’t have arrived at a better time for Audi. Backed by government incentives the world over, electric car sales – and efforts to establish suitable charging network infrastructure – are at an all-time high.

First revealed in concept car form at the 2019 Geneva motor show, the Q4 E-tron is a compact crossover-style SUV  based on the Volkswagen Group’s MEB (Modularen Elektrik Baukasten, or Modular Electric Toolkit) platform, created specifically for EVs. The car's development has been carried out with that of the recently introduced Volkswagen ID 4, Skoda Enyaq and Cupra Born – and it's produced alongside the ID 4 at a Volkswagen factory in Zwickau, Germany.

Together with their platform, all four share common powertrains as well as other key architectural elements.

The similarities are reflected in the proportions of the exterior, most notably the relative shortness of the bonnet and the way the A-pillars are set forward in a bid to maximise interior space. It gives the high-riding Q4 E-tron a unique look within the Audi line-up.

As with the more conventional combustion-engined Q3, buyers get to choose between two different bodystyles: an SUV with a sloping tailgate and the more coupé-like Sportback model, with a flatter liftback-style tailgate, driven here.

There is no mistaking the Q4 E-tron’s origins. Up front, there’s a bold blanked-off single-frame grille with Audi’s signature four rings. The overall styling holds true to the earlier concept, with prominent side feature lines above large wheel arches and the lower part of the door intended to add structure to the otherwise smooth flanks, while a sizeable spoiler above the tailgate helps to smooth airflow across the heavily curved roof. Audi claims a class-leading drag co-efficient of 0.26.

It's inside where the new Audi immediately impresses. The cabin is very contemporary, both in look and feel. It is also higher on perceived quality than any of its Volkswagen Group siblings. The front seats are set well back, because of the heavy rake of the windscreen, and the pedals are positioned relatively high due to a flat floor. However, there’s a large range of longitudinal and height adjustment, allowing you to quickly strike a comfortable driving position behind the hexagonal-shaped multifunction steering wheel.

There is a large expanse of dashboard, but its materials are all very agreeable. As is the clarity of the two digital displays – a 10.25in unit for the instruments and a standard 10.1in (optionally 11.6in) centrally mounted unit for the MMI infotainment system, which features Hey Audi conversational voice recognition. Buyers can choose between three visual set-ups: Standard, Virtual and Virtual Plus.

The Q4 E-tron is also the first Audi model to feature an augmented reality head-up display. Similar to that available on the ID 4, it reflects information, including navigation commands, on to the windscreen in two separate fields and with a varying depth of field.

It’s a versatile driving environment and there are many cubbyholes, including large bottle holders in each of the doors. The space-efficient potential of the MEB platform also combines with a relatively long, 2764mm wheelbase to provide impressive accommodation, particularly in the rear, where the Q4 E-tron offers greater leg room than either of its key rivals, the BMW iX3 and Mercedes-Benz EQA, which both use adapted platforms from their combustion-engined siblings.

The rear seat is positioned 70mm higher than those in the front, because of the housing of the battery, giving rear occupants an excellent view forward, albeit at the expense of head room. The lack of a centre tunnel provides the middle rear seat with uninterrupted foot space, too.

Boot capacity is put at 520 litres in the Q4 Sportback E-tron – five litres less than in the SUV. The loading floor is flat, although the lip is set quite high.

As with the ID 4, there has been no effort to provide extra luggage capacity at the front. The space underneath the bonnet is occupied by the power electronics and air-con compressor.

Buyers will be able to choose from three Q4 Sportback E-tron models when UK sales start later this month. These include the rear-wheel-drive 35 E-tron and 40 E-tron, which both receive a rear-mounted electric motor, delivering 168bhp in the 35 model and 201bhp in the 40. It is the four-wheel-drive 50 E-tron Quattro model driven here, though. Its dual electric motors supply a combined 295bhp to all four wheels via a single-speed gearbox. 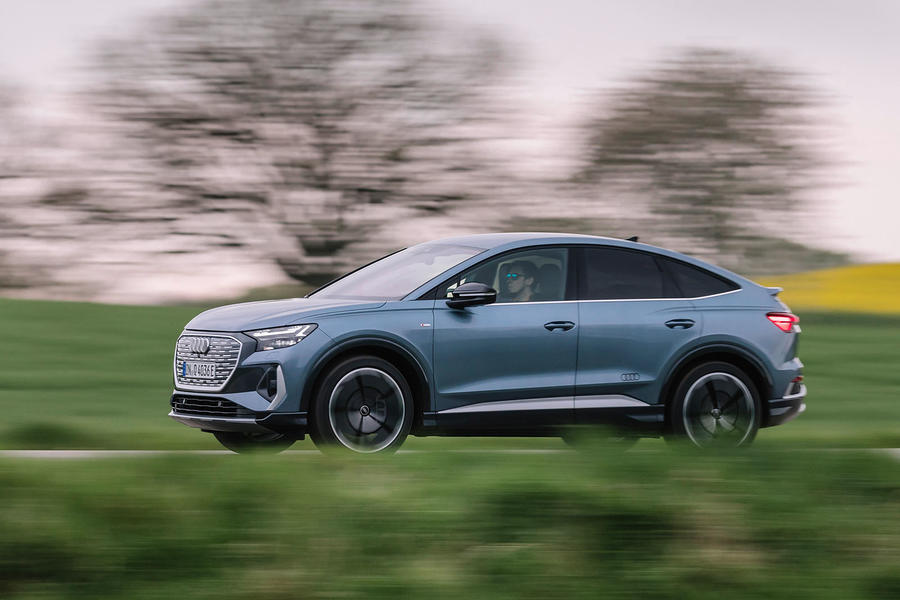 To get under way, you draw a slider-like shift mechanism on the centre console backwards into the default driving mode, D. This lets the Q4 E-tron coast without any perceptible regenerative braking when you lift off the throttle. Nudge the slider back a notch to select B and the new Audi automatically applies greater braking force on the overrun for additional energy recuperation.

Paddles on the steering wheel allow you select the level of regenerative braking in three stages. The lower level simulates the braking force of a conventional combustion engine while the higher setting provides greater retardation at up to 0.6g for maximum energy harvesting on a trailing throttle.

It’s a compelling powertrain, running a combination of an asynchronous electric motor up front and a synchronous motor at the rear. With 339lb ft, there is instant performance and smooth qualities to the delivery. The urgency of it all can sometimes overcome the otherwise outstanding traction with injudicious use of the throttle of out roundabouts and the like, though.

The 50 E-tron Quattro Sportback certainly feels quicker than Audi’s claimed 0-62mph time of 6.2sec suggests. This is 0.6sec inside the time quoted by BMW for the iX3 and 2.7sec quicker than the Mercedes-Benz EQA. Top speed is limited to 112mph – 12mph higher than that of the 35 E-tron and 40 E-tron owing to a longer gear ratio.

Refinement is outstanding, even by electric car standards. There is a faint whine to the operation of the electric motors under load and some wind buffeting around the exterior mirrors at speed, but overall it’s very quiet and calm at typical motorway cruising speeds.

A tight, 10.2m turning circle makes for excellent manoeuvrability in city driving. The steering is light and pleasantly consistent, although the electromechanical system fails to deliver any meaningful feel or feedback.

With the battery mounted low within the car's structure and an evenly balanced front-to-rear weight distribution, the handling is well controlled, with good response on turn-in and low levels of body roll in tighter corners. You’d never call it engaging, but the new Audi grips well, allowing it to generate quite high cornering speeds when pushed along.

The sports suspension of  the 50 E-tron sits 15mm lower than the Q4 E-tron’s standard underpinnings. It can be ordered with adaptive damping control, as on our test car, in combination with a drive select system that offers four driving modes: Efficiency, Comfort, Dynamic and Individual.

On optional 21in wheels shod with 235/40-profile front and 255/40-profile rear Bridgestone Turanza Eco tyres, the ride is surprisingly compliant, with impressive control over small bumps and isolation of shock over larger ones.

As with the less powerful 40 E-tron, the 50 E-tron receives a 400V 76.6kWh (usable) lithium ion battery. We’ll need more time behind the wheel to verify the 309-mile range claim. Our test route was predominantly flat and wasn’t the longest, but you can recoup a surprising amount of energy by being active with the steering wheel paddles to alter the level of regeneration.

Recharging of the battery can be achieved at up to 125kW, with around 80 miles of range claimed in 10 minutes on a high-power charging. 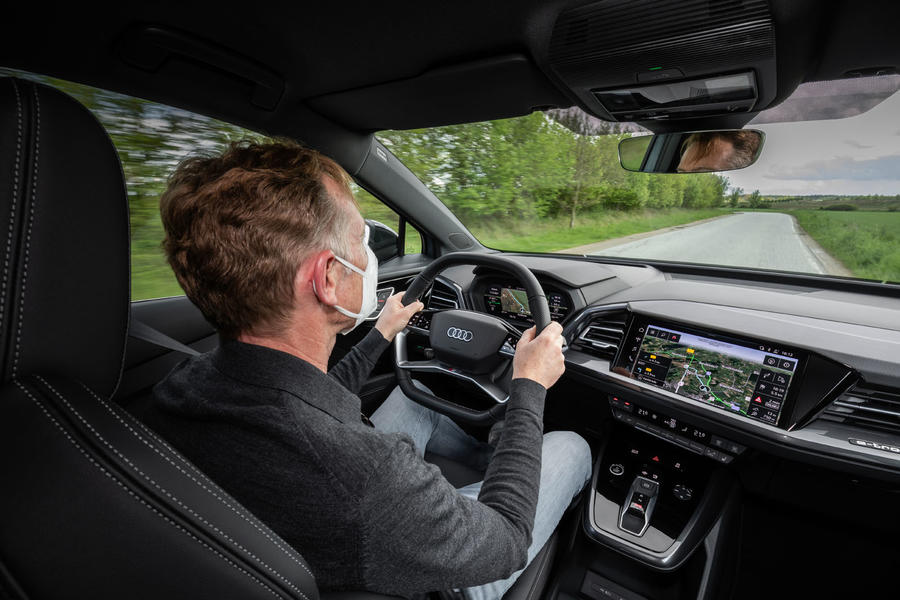 Pricing for the Q4 Sportback E-tron Quattro is yet to be revealed, although Audi says it is likely to come in at around £1500 above its SUV equivalent, which should put the model driven here at around £53,000.

The Q4 E-tron is well thought out and thoroughly well executed. It is not tremendously engaging to drive, but in top-of-the-line 50 E-tron guise, it delivers strong performance, responsive handling and a nicely refined ride. Its biggest drawcards, though, are its roomy interior, generous accommodation by class standards and, on initial impressions, overall quality. It's a likeable car that feels as much at home around town as it is out on the open road. 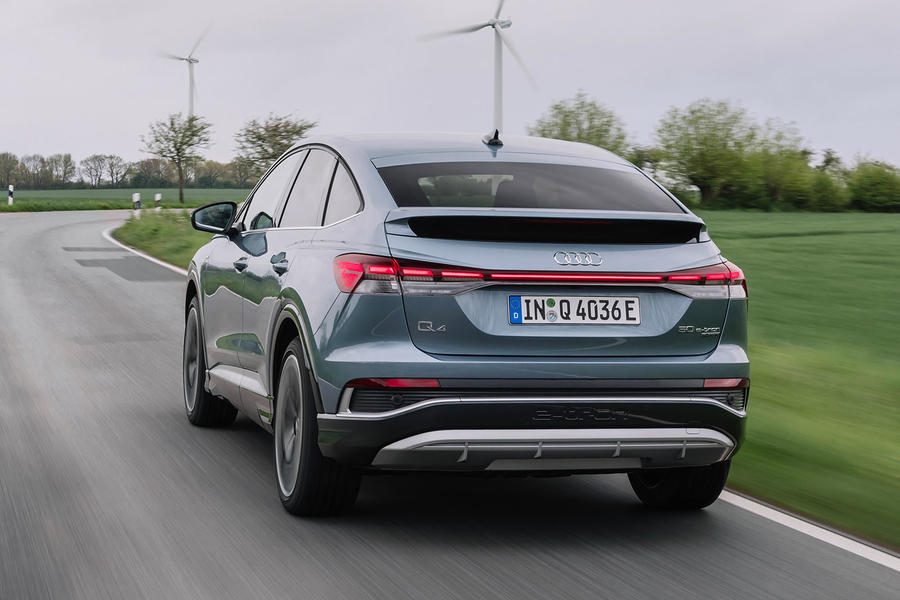 "I bet they are worried they are missing out on petrol tax revenues!"

Of course, its a Zero sum game. Losing revenue on ICe vehicles, means it has to be recouped on EV's. In a few years time, i suspect the BiK for EV's will be at a level where hybrids are now - ie 10-15%.

Oh great! Another fat dumpling blob thing that can't decide what it wants to be! Overjoyed.

Why bother with a rear Window?, just have rear facing Camera connected to the rear view Mirror.