From £47,5107
Compact electric crossover reduces the brand’s entry-level EV territory to £40k, but is only half-convincing in dynamic terms and seems expensive compared with rivals
Open gallery
Close

The EQA marks the moment another legacy car maker moves its electric car roll-out into a higher gear. Astonishingly, it’s a compact crossover, and one that will act as the crucial entry-level EV for Mercedes – a zero-emission, three-pointed hook for those who can’t stretch to the £65,000 Mercedes-Benz EQC SUV, and one designed to challenge the Volkswagen ID 3 and upcoming Tesla Model Y.

Following the EQC and the EQV, the EQA is the third pure EV in Mercedes’ EQ sub-brand, with the S-Class-flavoured EQS soon to become the fourth. However, whereas the larger EQS will sit on its own truly EV-specific architecture, the EQA uses an adapted GLA platform. It's much like the GLC-based EQC in this respect, and the same applies to the aesthetics – the EQA is very closely related to the Mercedes-Benz GLA.

Clearly, the aim has been to keep development costs in check and the asking price as competitive as possible, and to give prospective customers something that feels reassuringly familiar.

So what exactly is an EQA, beyond the connection to its ICE-equipped GLA cousin? For the EQA 250 tested here, the driveline consists of an asynchronous 187bhp electric motor mounted between the front wheels and a 66.5kWh lithium ion battery pack that sits between the axles and forms a structural part of the chassis. The body-in-white is mostly to GLA specification, although the subframes have been modified to reduce road roar that would otherwise be thrown into unpleasant relief by the quietness of the powertrain.

The basic suspension design – MacPherson struts up front with a multi-link rear – is also carried over from the GLA, and although it’s centred on comfort, the passive spring and damper rates have been increased on account of the battery. At 480kg, it alone weighs as much as an entire Caterham Seven and takes the EQA’s kerb weight to 2040kg.

Cars in Premium Plus specification, such as this one, then come equipped with two-mode adaptive suspension and 20in wheels, although owing to its winter tyres, this German-spec car rides on the standard 18in wheels. Range on the WLTP cycle is 263 miles. The similarly sized but £6000 less expensive Kia e-Niro claws 282 miles from its 64kWh battery, while the Model Y is expected to manage more than 300 miles and the top-ranking ID 3 Tour is claimed to deliver 336 miles, courtesy of its generous 77kWh capacity.

Mercedes says more EQA variants with greater driving range are on stream but gives no figures. Some of those derivatives will also gain an additional, potent electric motor on the rear axle – one that might, says Mercedes, even be favoured over its partner at the front when it comes to propulsive duties. It leaves the door open for something fruity at the top of the range. An AMG EQA, perhaps. 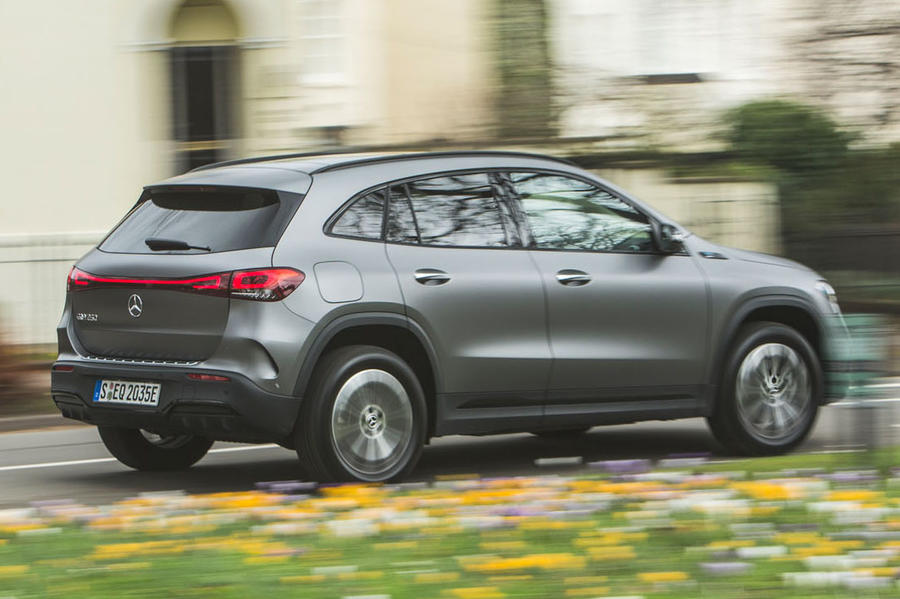 But let’s not get ahead of ourselves. How does the regular car fare? In truth, it’s a mixed bag. Positives include the driving position, which is sporting, despite the stratum of battery cells propping it up, and more serious in feel than you might expect, but very comfortable.

In general, if you like what Mercedes has done with the interiors of its small ICE models, you’ll like it in here because it’s identical. The broad MBUX displays are as crisp and EV-related graphics nicely executed. The touchpoints are mostly pleasant and the infotainment controls make those of the ID 3 feel as slick as an Etch A Sketch.

Still, it’s a little plasticky in parts, given the £40,500 asking price, and doesn’t feel especially spacious. Indeed, it isn’t spacious. The e-Niro in particular is noticeably more generous in terms of rear leg room.

The GLA is similarly cramped and so, by sharing platforms, there was never much Mercedes was going to be able to do about that, or the raised floor that eats away at boot space. A bespoke architecture would also have allowed the designers to better imbue the EQA’s cabin with the likeably lofty atmosphere found in many EVs.

As it is, not even the panoramic roof or vivid lighting can save the car from feeling somewhat claustrophobic. Good points include the natural steering, the car’s crisp change of pace in Sport mode (although don’t let the responsiveness lull you into taking on ambitious overtakes because the car’s 91bhp per tonne is pathetic and quickly shows) and good acoustic isolation.

I also suspect you could own an EQA and drive it for hundreds of thousands of miles without ever needing to change the brake-discs. Like any electric car, the Mercedes employs regenerative braking, whereby the motor provides resistance rather than drive, thereafter returning energy to the battery, and there's no need for the physical bite of pad on disc to slow the car down.

The difference with the EQA is that the system works exceptionally well. There are three broad regen settings ranging from ‘just a hint’ through to the kind of retardation you’d get with moderately forceful use of traditional brakes, and you can rapidly flick through the presets using the wheel-mounted paddles.

It quickly becomes intuitive – and engaging, even, because you can ‘trail’ the system into bends to reasonably convincing effect – but there’s also an Auto setting, which is arguably the best bit. It uses sensors to recognise speed limits and other traffic, and GPS data for upcoming bends and roundabouts, and applies the regenerative braking accordingly. Barring one or two hiccups during our test drive, it worked seamlessly, trimming momentum as much as necessary, but no more, and always right on cue.

Less impressive is the ride quality. In town, the suspension feels overdamped, at times lending the car an almost rickety quality on poor roads, while the feeling at speed is one of it being undersprung. You’ll even experience what engineers call ‘head toss’ on the motorway. Not a lot, but enough to become irritating.

It’s possible these tyres don’t help but, broadly speaking, Mercedes seems to have missed the sweet spot here. The suspension is too unyielding in Sport and too flaccid in Comfort. Along with the overly light pedal weights, it means the EQA slightly lacks that sense of precision engineering. 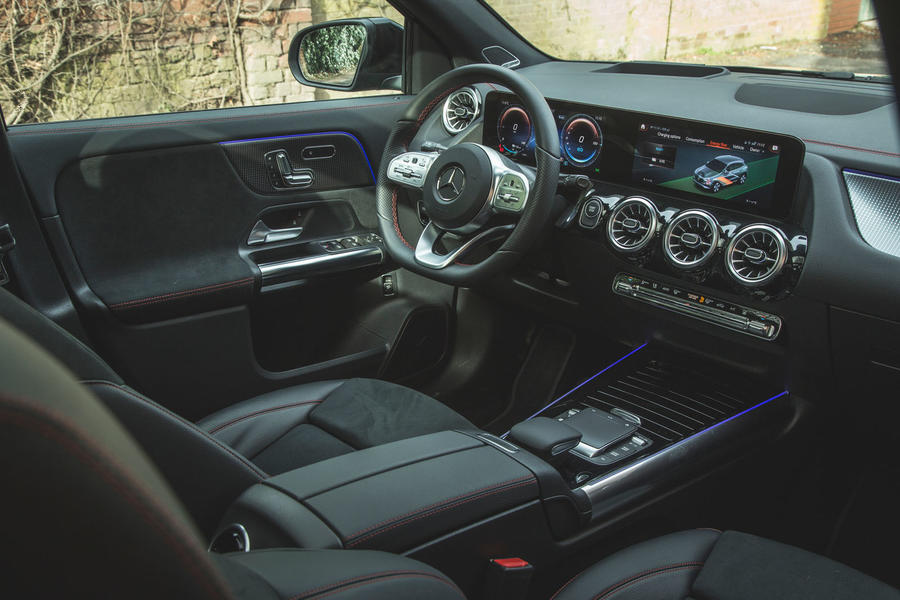 Which is why it’s impossible to wholeheartedly recommend the EQA, even before you consider that options can easily take the asking price to more than £45,000, which is Polestar 2 money – or the more spacious, finer-riding Volkswagen ID4, in a generous specification, and with change.

As a curtain-raiser for Mercedes’ EQ range, the EQA is plausible on paper and captures the urbane aesthetic the premium market and existing Mercedes owners both demand, but too often this reimagined, zero-emission take on the GLA lacks the polish you’d expect from Mercedes. 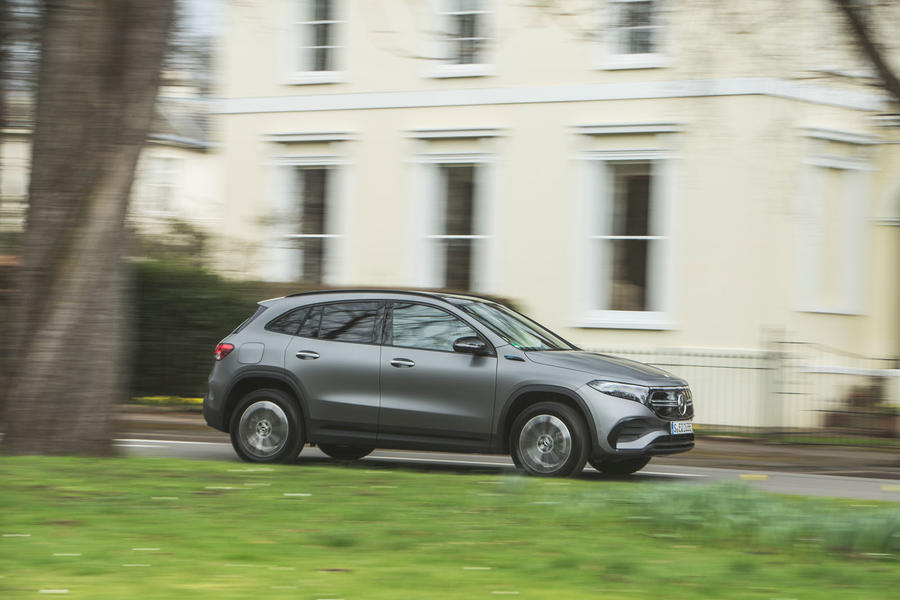