The BMW iX3 represents a significant reset for BMW’s electric car plans – and not only because it holds the distinction of being the first BMW model to be produced in China for export to key markets.

The iX3 also dispenses with the earlier strategy that called for BMW’s electric models to be based on a dedicated aluminium structure called LifeDrive, as with the similarly named but largely unrelated BMW BMW i3, launched back in 2013. Instead, the new but familiarly styled electric SUV is based on the same CLAR platform as recently facelifted petrol, diesel and plug-in hybrid versions of the third-generation BMW X3.

It’s a move we’ll apparently be seeing a lot more of in coming years as BMW rolls out electric-powered models based on its current platforms, including next year’s production version of the BMW i4 concept, which will also rely on an adapted version of the CLAR-based structure from the latest BMW 4 Series.

The use of an existing platform might sound like a compromise at a time when rival car makers are busy extolling the advantages of their own dedicated electric car structures, and BMW officials do reveal that some modifications have been undertaken to the structure in the electrification process. But as BMW is quick to point out: “The [CLAR] platform was always conceived to house electric motors and batteries, so the decision to use it was not controversial but actually quite straightforward.”

The iX3’s single electric motor is mounted within the rear axle in quite a compact drivetrain housing that’s claimed to be up to 30% smaller and a good deal lighter than that used by the i3.

Described by BMW as a fifth-generation eDrive system, it delivers 282bhp and 295lb ft to the rear wheels via a single-speed gearbox and an electromechanical Performance Control differential, with three driving modes: Eco Pro, Comfort and Sport. 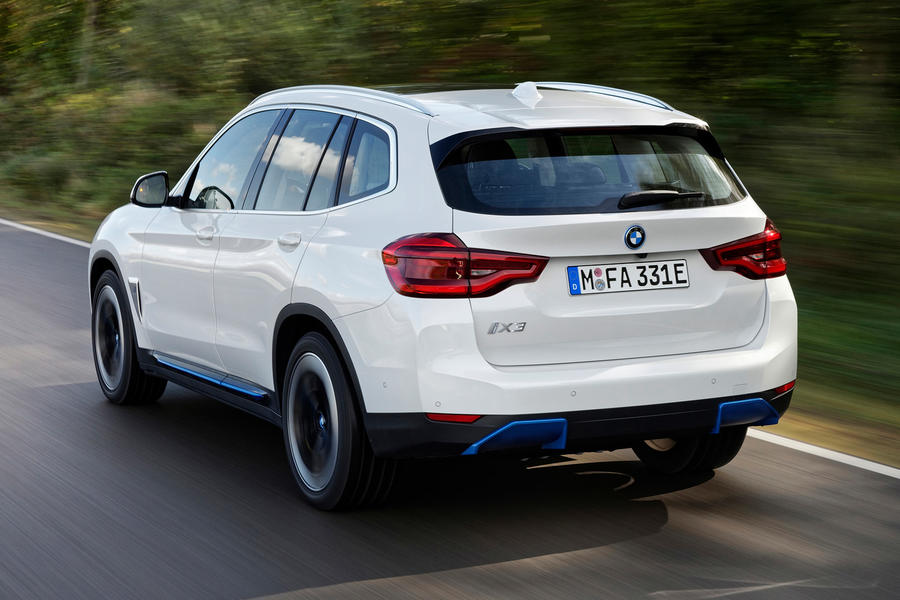 Despite its rather modest torque, there’s urgency in the new BMW’s step-off qualities, as evidenced by the iX3’s official 0-37mph time of 3.7sec. But as speeds rise and aerodynamic resistance builds, the performance begins to trail off, resulting in a 0-62mph time in Sport mode of 6.8sec, which is 0.7sec slower than that of the four-wheel drive X3 xDrive30e plug-in hybrid.

This isn’t to suggest that it’s at all slow. Put your foot down and it responds with brisk acceleration, as its official 50-75mph figure of 4.1sec shows. But with 2185kg to haul, its single electric motor lacks the strength of the dual-motor systems of some admittedly larger premium-brand electric-powered SUVs.

What the iX3 lacks in outright performance, though, it more than makes up in refinement. Even by electric car standards, its motor and associated power electronics truly are whisper quiet. At meaningful speeds, it is the persistent lick of wind around the exterior mirror housings and the roar of the tyres – our test car had 245/45-profile front and 275/40 rear Yokohama Advan tyres on optional 20in wheels – along the bitumen that you notice most. Should you want it, you can have a synthetic motor sound that rises and falls in volume in unison with throttle inputs in Balanced and Sport modes.

Another impressive aspect is the iX3’s advanced energy recuperation system, which offers the driver four modes: Low, Medium, High and Adaptive. In High mode, it allows one-pedal driving, in which your speed drops away quite dramatically as you step off the throttle, meaning you only really need to use the brake pedal to come to a complete stop, in the interests of harvesting the maximum amount of kinetic energy.

The Adaptive mode is the real breakthrough, though. It constantly monitors your driving either in combination with the route the driver has plugged into the navigation system or independently and then decides whether to actuate the brake energy recuperation system or a separate coasting function that lets the iX3 freewheel without any frictional losses for extended distances as you come off the throttle.

Despite all the technology packed into it, brake pedal feel is quite good. It’s firm, easy to modulate and, most importantly, consistent in its action. Electric energy for the motor – a BMW unit produced at its Dingolfing factory in Germany – comes by way of a 74.0kWh lithium ion battery consisting of 10 modules and 188 individual prismatic cells supplied by Chinese battery specialist CATL. Mounted beneath the rear seat and within the floor of the boot, it is claimed to provide the new SUV with a range of between 280 and 285 miles on the WLTP test cycle.

Charging, meanwhile, can be carried out on a standard 7.4kW or optional 11.0kW AC system. For speedy topping up, though, you’ll need the 350kW DC system, also optional, which is claimed to provide an 80% charge in 34 minutes.

The decision to forgo the dual-motor four-wheel-drive set-up of some rivals and mount the electric motor at the rear, along with the battery, provides the iX3 with a distinctly rear-biased weight distribution of 47:53. As a result, the iX3 boasts many of the handling traits of BMW’s more traditional combustion-engined models.

The steering, a fixed-ratio set-up, is typically weighty in feel, giving the driver instant confidence. Without any drive forces going through the front wheels, the electric set-up is very accurate and manages to relay a fair bit of detail.

Around town, the new BMW is quite wieldy, helped by the instant torque off the line, relatively tight turning circle and ability to change direction quickly.

However, it’s out on the open road, where its rear weight bias and rear wheel-drive character really shine through, that it is at its engaging best. There’s a general fluidity to the handling that marks out the iX3 as one of the more engaging electric SUVs you can buy today. Its overall dynamics are always going to be restricted by its substantial weight, but there’s enough here to satisfy enthusiast drivers.

The iX3’s 20mm reduction in ground clearance over the standard X3 helps to enhance its already low centre of gravity, which is claimed to be 70mm lower than that of the standard X3, and you can confidently carry speed into a tightening corner without lifting, at which BMW’s second dedicated electric model will oblige with oversteer. It’s quickly quelled by the DSC (Dynamic Stability Control) system, though, which brakes individual wheels to bring the vehicle back on line.

First revealed in lightly veiled concept form at the Beijing motor show in 2018, the iX3 adheres closely to the look of the latest X3. There are some subtle exterior styling changes, including a new-look front bumper, a blanked-off grille, optional blue highlights and, as standard, unique 19in wheels, which alone are said to improve its overall aerodynamic efficiency by up to 5% compared with the standard X3 wheels.

Inside, it’s all pretty familiar apart from the instrument graphics and switches for the various driving modes on the centre console. The packaging of its battery robs the boot of 40 litres compared with petrol and diesel X3s, but its 510 litres is 60 litres more than that offered by the X3 xDrive30e plug-in hybrid. 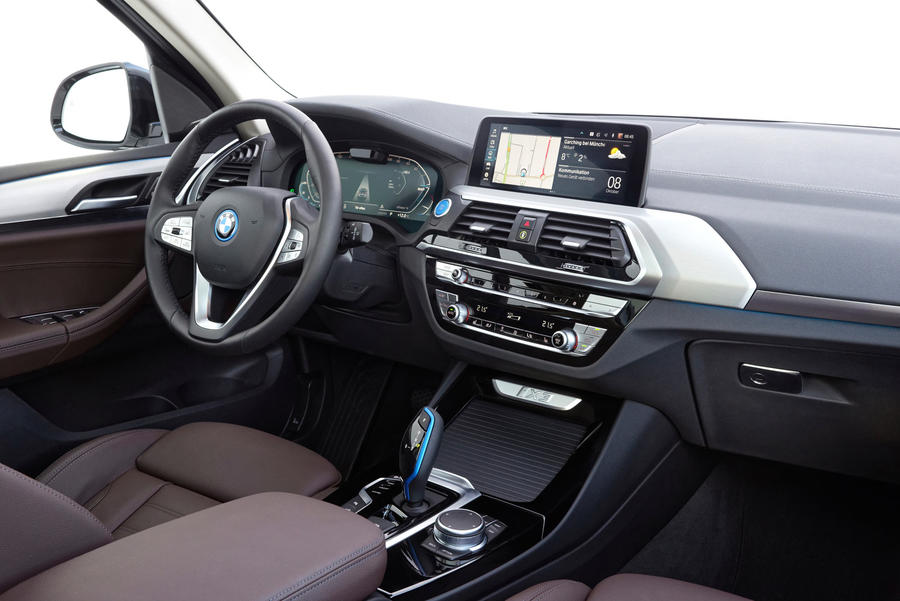 Right now, the iX3 is pretty much out on its own. It’s positioned above crossover-style SUVs like the new Volkswagen ID 4 and upcoming Mercedes EQA but below larger and more powerful offerings such as the Audi E-tron and Mercedes EQC. Its most obvious rival is the Jaguar I-Pace in terms of price in the UK, where pre-orders for the new £61,900 iX3 Premier Edition have already opened ahead of the planned start of deliveries next summer.

If you’ve decided that it’s time for an electric car and the iX3 fits your budget, you would be foolish not to give it a good look. It’s not the most powerful or the fastest in its class, but it offers great balance, entertaining handling and quite a reasonable range as well. 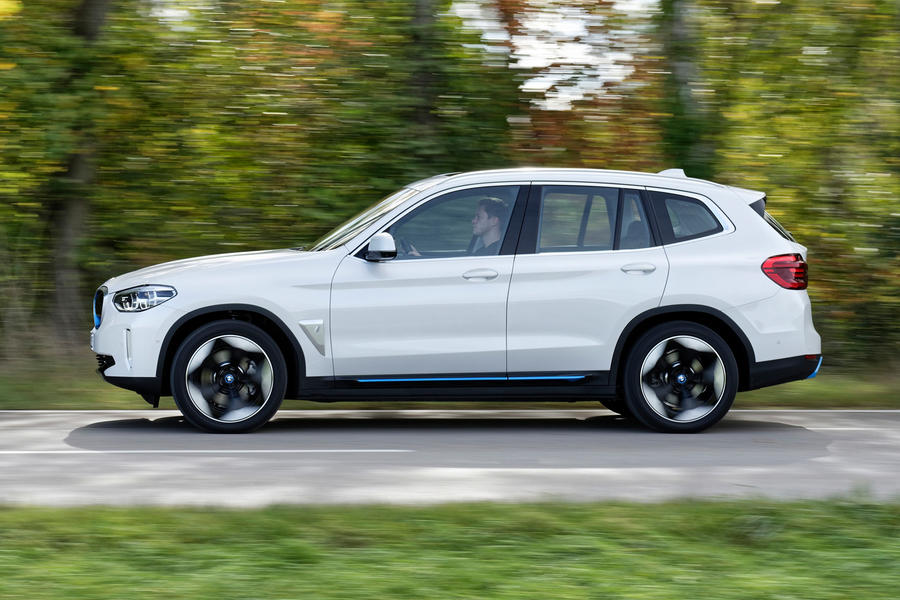 It's a £60k car. Any chance of someone making an electric family car that regular people can afford sometime this decade?

It's a £60k car. Any chance of someone making an electric family car that regular people can afford sometime this decade?

I'm all for new EVs, but that

I'm all for new EVs, but that's laughably bad isn't it?  An SUV that's rear wheel drive only despite the fact that it's easier (and more efficient) to do 4WD with an electric drivetrain.  The only problem with 4WD is the extra cost of the front motor, but this is a very expensive car.  It's also slower, heavier and has less range than the competition.

Perhaps it has a nice interior, that and the badge is all that seems to matter to some buyers.  I wonder if they will sell any...

Interesting regen feature on the iX3, but I'm pretty sure it doesn't charge at 350kw - otherwise it would be a lot more interesting. You might want to correct that to 150kw (which I believe is the correct speed) to avoid confusion; at 150kw it does charge at '350 mph' though. Also, as someone else has said, what's underneath the massive bonnet? Otherwise, great review.