This is the mid-level longest-range version of the new Audi Q4 E-tron, which itself could be thought of as Audi’s first mass-market electric car. Coming after the bigger, pricier and more luxurious E-tron SUV and the Porsche Taycan-related E-tron GT pseudo sports car, this is the model that, Audi will hope, will begin to give the vast majority of its customers an affordable - but also still a desirable, usable and versatile - route into EV ownership.

In smaller-batteried 168bhp form, the Q4 E-tron can be had from just a whisker over £40,000. The version we’re testing is slightly more expensive, but it combines a 201bhp rear-mounted electric motor with a drive battery of a usable 77kWh of capacity, and advertises some 316 miles of WLTP-lab-test-verified range. That’s a figure competitive with the longer-range version of the Polestar 2, albeit not quite equal to the very longest-range versions of the Tesla Model 3 and Ford Mustang Mach-E (both of which can currently be had for a little more outlay than our Q4 test car). For a sub-£45,000 EV, however, it’s decent battery range for the money, while 125kW fast-charging ability as standard on bigger-batteried cars makes long-range usability all the easier to contemplate.

The Q4 E-tron becomes Audi’s electric sibling for the Volkswagen ID 4 and Skoda Enyaq, taking the VW’s Group’s MEB specialised electric car platform as its mechanical basis and slotting into the wider Audi showroom range just where you’d expect it to: as a mid-sized crossover SUV sized between the Q3 and Q5. Audi’s key claim for the car is that it has outstanding interior packaging, though: passenger space that makes it feel much more like a full-sized SUV on the inside, despite measuring less than 4.6m in length on the outside, thanks to that space-efficient architecture.

The other notable departure here is to do with mechanical layout. While the range-topping E-tron 50 version of the Q4 will have two drive motors and independently controlled quattro four-wheel drive, the lower E-tron 35 and mid-range E-tron 40 become the first Audi mainstream production models in modern history with rear-wheel drive (not counting the rear-driven versions of the R8 supercar). 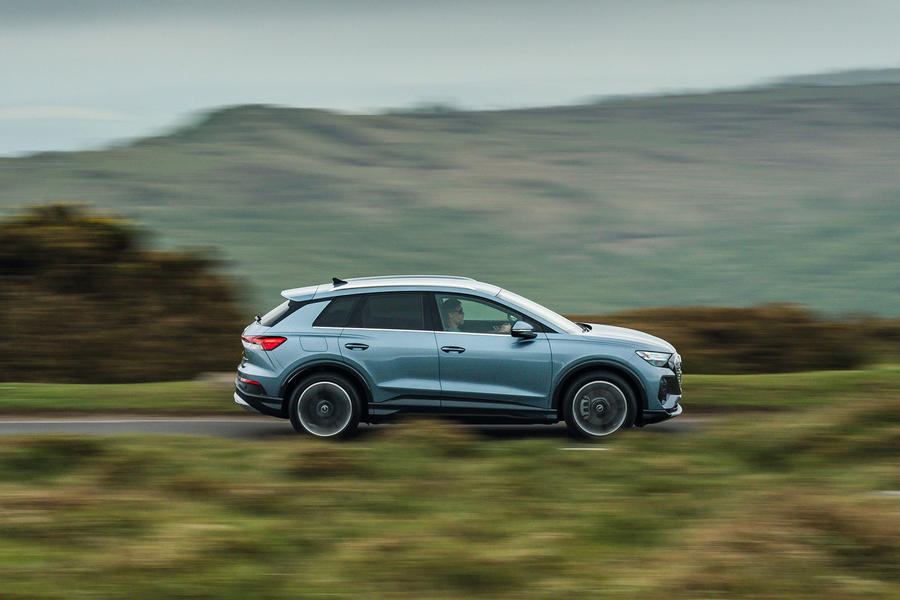 Audi clearly isn’t afraid of the potential of electric drive to rewrite the rulebook on how its cars are laid out, then - or even how they look. Making EVs will mean embracing change for every ‘legacy brand’, after all - and Audi has the advantage of being part of a manufacturing group in which the cost and risk of making the switch can be shared around. Sounds very sensible.

Even so, the Q4 is quite a strange-looking car. When you stand back and take it in, you’ll quickly see that it looks much less like either a Q3 or Q5 from some angles than some slightly angry, high-rised, 150%-scale modern take on the original A2 hatchback. The car’s bonnet and front overhang are very short, its cabin and wheelbase are both very long in proportion to its overall length, and its waistline is high, with an awful lot of metalwork on show below it.

Luxury car design convention has held for decades that the length of a car’s bonnet, and the distance presented between the front wheel arch and the base of the windscreen - 'the premium gap', as it has become known - are key in defining the visual appeal of a car you might be inclined to pay a premium for. Well, the Q4 E-tron hasn’t got one; couldn’t really have less of one, actually.

It has, instead, a slightly stunted, snub-nosed look in profile, those busy body surfaces and two-tone arches and sills all clear attempts to disguise the sort of proportions that would otherwise look awkward and bulky. It might have been fair enough, of course, if the Q4 had come along earlier, for Audi to have simply declared that “electric cars are different” and that it isn’t fair to judge them for aesthetic appeal as you might an equivalent combustion-engined car. Ten years ago, or even five, we might have swallowed that.

But today - when EVs like the Jaguar I-Pace, Honda E, Polestar 2 and Hyundai Ioniq 5 have all showed us differently? Surely, it’s for Audi to justify its standing as a design brand, and its premium positioning, with a better-looking electric car? In my view, they’ve missed the target by a distance here.

The view from the inside of the Q4 outwards isn’t much more familiar. You sit at a midway compromise of normal- and SUV-typical eyelines, but your view of the front of the car and the wider world outside is hampered by steeply raked A-pillars, a steeply raked windscreen, and by that short bonnet that slopes away from you as it advances, whose forward extremity is therefore quite hard to judge. The car’s windscreen angle is like that in order to provide good aerodynamics for the Q4, no doubt; also to provide room to accommodate the projector for the car’s augmented-reality head-up display, which Audi touts as a major technical selling point, ahead of the driver.

There is, however, certainly plenty of room inside the Q4. Both head room and leg room in the front row are very generous for a car of this size, likewise occupant space in the back. You won’t find the potential to slide or to individually fold the back seats down, but taller adults could nonetheless still travel very comfortably. Storage space is equally good, the car’s angular door console design including angled bottle holders at a higher level, as well as decent-sized pockets further below. 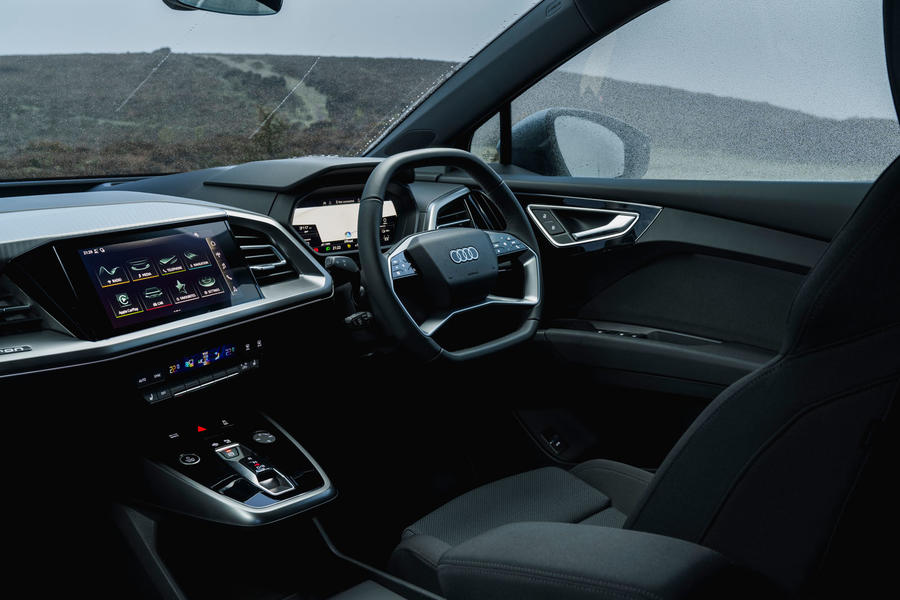 The Q4’s dashboard is of a bold, angular, geometric design, which extends even to include a slightly off-circular steering wheel with flattened-off top and bottom sections. There’s a three-tier centre stack, with the infotainment system on its top level, the  gear selector and drive mode controller on the second level, and extra storage on the lowest one.

It looks imaginative and attractive enough, but the Q4’s interior doesn’t impress so much on a tactile level, or with the attention to detail that Audi usually lavishes on perceived quality. Our test car had trim materials lacking in a bit of variety, relying a lot on glossy black panels, which are vulnerable to smudgy finger marks. It also featured quite a lot of hard, dull, plain-feeling moulded plastics, many of which - around the steering wheel, centre console and door consoles in particular - had been left with sharper raised edges and fitted together a little imprecisely. The door pockets, which would typically have a felt or rubber lining in an Audi, had been left hard and slippery, for their contents to slide around noisily within as you drive. Those bottle holders, meanwhile, don’t have the sprung retaining supports that you’ll find in the in-board cupholders, and so their contents can rattle and roll around similarly. Is this Audi cabin quality? It’s debatable.

The Q4 certainly has plenty of on-board digital technology to pique your interest, of course: fully digital instruments, touch-sensitive steering wheel controls, and that head-up display, whose graphics do occasionally help you to spot a side road that you might otherwise have missed, or to get the right exit on a busy roundabout. It’s as easy to drive as EVs increasingly are, with the moderate, sure-footed and reassuring dynamic character you’d expect of an Audi, rear-wheel drive or not.

Our test car had optional 20in wheels and adaptive dampers. It handled accurately, riding with a firm-edged restiveness that made it prone to fidget a little over uneven surfaces, but maintaining reasonable body control regardless, even at higher speeds, and avoiding any sense of aggression about its damping or lumbering heaviness about its primary ride. The car’s rolling chassis can be a little bit noisy over rougher asphalt and sharper edges, the front suspension liable to clunk around just a little over the worst lumps and bumps. Perhaps it’s your proximity to that axle that makes it all the more noticeable when it does.

The car’s performance level isn’t particularly assertive or sporty-feeling in the broadest of terms, but it’s responsive and feels quite potent when accelerating below about 50mph, and it suits a mid-market family SUV well enough. At motorway speeds, there’s enough performance to pull off a lorry overtake sufficiently quickly, and the car never feels anything less than amply powerful, but it only has any real urgency at lower speeds.

Audi gives you the option to let the car manage its own coasting and regenerative braking depending on what’s coming up on the road ahead, or to flick those regeneration settings up and down using paddle shift levers. Learn to do that well - to let this two-tonne car coast when it can and conserve energy, only to recapture it with the electric motor rather than the brakes when you need to slow down - and you’ll find you can beat an indicated 4.0 miles per kWh when running around town at low speeds, making for more than 300 miles of range when you need it, while 70mph motorway cruising is typically done at around 3.0mpkWh, allowing for more like 230 miles of range between charges. 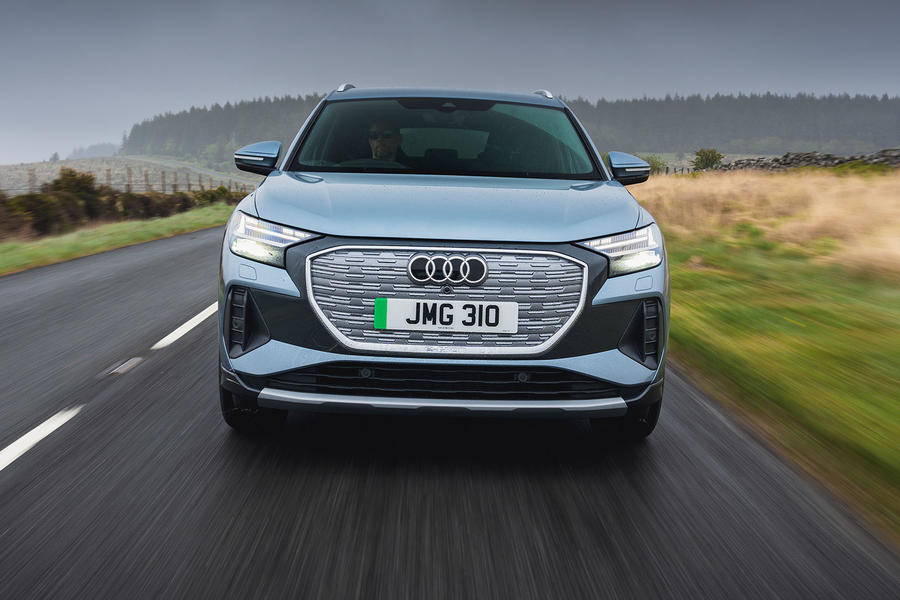 This is a quiet, refined, mature-feeling and fairly precise-handling zero-emissions family car. In many ways, it’s precisely the sort you’d have expected Audi to make - but not in every way. It has impressive space and practicality and creditable electric range, too, but it doesn’t have the classic Audi design appeal you might have expected of it, nor quite the detailed, materially inscrutable cabin quality.

The Q4 performs and handles a little unmemorably, but without major fault. It doesn’t attempt the dynamic agility of a Tesla Model 3, say, or even a Ford Mustang Mach-E. But it does have the secure, predictable dynamic assurance of a modern Audi - and from a car whose driven axle is at the opposite end of the chassis from the one at which Audi is used to having it, and in a package weighing what it does, that’s no mean achievement.

Does it do enough to stand apart from its cheaper MEB Volkswagen- and Skoda-brand platform buddies as a premium product, though, or simply to feel, in its own right, like Audi’s extra-special, premium-worthy, zero-emissions vision for the near-term future of family transport? I’m not so sure it does. It’s a start, and an important one at that in what’s rapidly becoming the big-volume part of the EV market. But, from a firm built on technical innovation, it does seem like a slightly tentative, conservative first step. 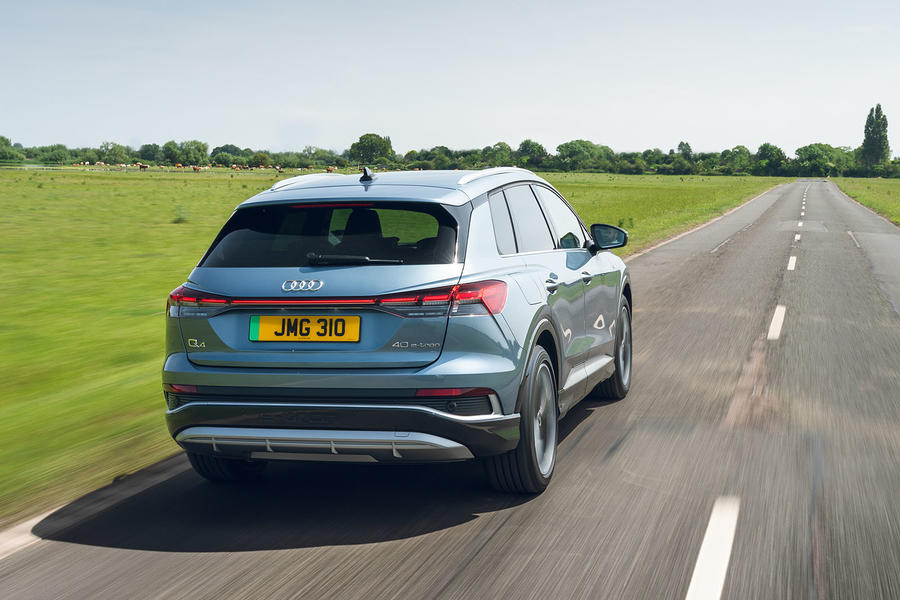 Greg Kable reviewed this exact car for autocar last week, and it reads entirely differently, and much more positively. It's really quite confusing, autocar editors,  to have two reviews of the same model published within 7 days of each other, using the same images, with such different comments.

@xxxx I did say model tested but even at basic price still no four wheel drive ,they should stop putting these so called packs that they add if you wanted say electric seats and nothing else thats all you should pay for,wanted to buy a skoda Kodiaq but put off with the extra packs and no 4/4 to dear.I think when customers want to buy a car no mater what make we should speck to what we want not them trying every trick in the book for more money thats ok if you have deep pockets .One dealer tried to sell me an electric car rear wheel only wont get up my drive in the winter and I am not paying wall socket stop the £2500 and give us free fitted wall socket maybe more EVs will be sold.