From £39,5008
We drive Audi's latest and largest estate to see if it's suitably equipped to take the fight to the BMW 5 Series Touring
Open gallery
Close

The second body style of Audi’s range stalwart, the A6. Joining the recently launched saloon, which we drove back in May, the Avant estate arrives in the UK not long after its sibling later this year.

It has a big job on its hands, this car. Audi is pitching the A6 Avant as some kind of ‘one size fits all’ model, offering the versatility desired by well-heeled family estate buyers, plus the comfort and style expected of a high-end executive model, alongside the all-important focus on efficiency. It also fulfils the technology brief with a vast array of gadgetry, while also, somehow, aiming to introduce more sportiness into the package.

To satisfy the practicality needs of the market the Avant has grown in width, height and wheelbase length, improving rear seat head, leg and shoulder room in the process. It is, however, shorter thanks to cropped overhangs, a move which Audi reckons enhances the visual athleticism of the car.

Underneath the A6 Avant’s neatly styled bodywork is a hybrid aluminium chassis and five-link suspension. Four options are available: the base passive setup, a lowered sport setup, springs with adaptive dampers, or a fully adaptive air suspension system. A new all-wheel-steering system is also on the options list.

Alongside a dizzying array of new cabin and driver assistance tech, the A6 also joins the latest Audi A7 and Audi A8 in adopting mild-hybrid systems across the range. Entry-level cars use a 12V system, with the 48V tech reserved for the six-cylinder engines.

It recuperates energy under coasting or braking (storing it in a lithium ion battery that serves as the main electrical supply on 48V models) activates the start/stop when coasting to a halt at up to 14mph, and turns the engine off entirely for short periods when lifting off above 34mph. The result is an average efficiency improvement of 10% over equivalent engines not equipped with the tech. 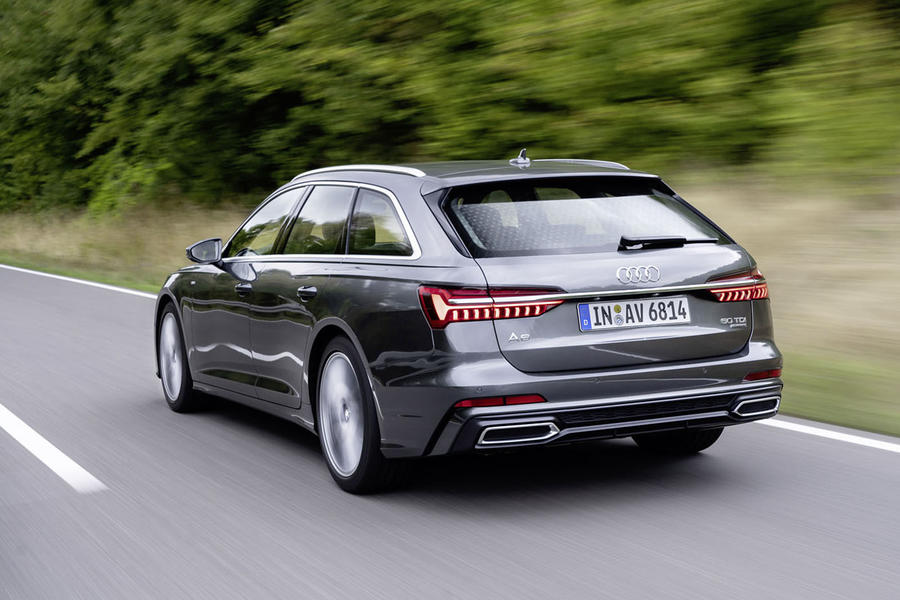 The A6 Avant plays up to the well-worn Audi cliché: it’s a class challenger that builds on its predecessor in every area with an exceeding level of polish, without really dazzling or surprising you along the way.

That’s not a black mark by any means, though. Executive estates are meant to be consummate all-rounders, fitting the ‘only car you’ll ever need’ mantra with the highest level of competence. And on that basis, the A6 Avant is up there with the very best.

We’ll let you make up your own mind on the styling, but to our eyes the new Avant is a better-looking car than its predecessor. Neat surfacing combines with flared arches to give it a squat and purposeful stance, though Audi’s now trademark super-wide grille isn’t everyone’s cup of tea. It should be noted that all of our test cars were riding on chunky 20 or 21in alloys, and we suspect smaller wheel options might spoil the aesthetics.

Audi’s design team makes lots of noise about the steeply raked rear window line, claiming it negates the need to offer a ‘shooting brake’ option (think Mercedes CLS) yet doesn’t impede on boot space. The 598-litre seats up figure quoted is identical to the outgoing Avant, although the length of the boot has increased slightly. The biggest improvement is in terms of rear seat room, with two six-footers finding ample space to spare.

The rest of the interior is quintessentially Audi. Fit-and-finish is almost without fault, the materials look and feel suitably high-end, and even minor switchgear operates with the slickness you’d expect from the masters of Teutonic precision. The Virtual Cockpit also looks crisper than ever with the latest graphic updates.

There’s one rather crucial exception to this, however. The new MMI Touch dual-screen layout has attracted criticism from us in the past, and it’s no different here. The haptic feedback gives off a passable impression of traditional buttons, but often still requires a second or even third stab before it reacts. The climate display is also needlessly complicated to operate on the move. While it’ll become more intuitive with familiarity, the eyes-up simplicity of the old rotary control dial is sorely missed.

It’s fractionally improved in every sense over the old model: there’s slightly more power, a little more torque and subtly better efficiency figures. Despite the size and weight it has to move here, it’s an engine that’s very well-matched to the Avant, in part thanks to the standard seven-speed dual-clutch 'box. Other than some hesitance when pulling smartly away from a standing start, its changes are smooth and predictable, keeping the motor in the sweet spot between response and refinement. It's necessary, as the motor becomes a touch too vocal when really pushed.

It means that, like the old car, the base A6 makes a slightly better case for itself as an all-rounder compared to the six-pot unit which, while more cultured and noticeably more brisk, struggles to justify a chunky £9000 price hike and is lumbered with a decidedly less slick eight-speed Tiptronic box.

Like the saloon, the A6 Avant’s mild-hybrid tech operates largely imperceptibly. The engine-off coasting is unnerving initially, but the system always restarts the moment you brush the throttle. It also adds refinement to what is already a cabin pleasingly free of wind, road and unwanted engine grumble.

While there’s no weak link in the engine range, we recommend you choose carefully with the suspension options. We tried the standard springs with adaptive dampers back-to-back with the optional air suspension, and found the former (when left in auto damping) offers a more consistent compromise between tidy body control and a taut, yet isolating, ride. The air system is surprisingly unsettled at lower speeds and is worth avoiding as a result.

Comfort has improved, then, and so has agility - at least on the cars we drove fitted with the rear-steer system. Turning the opposite way to the fronts by an angle of up to five degrees at speeds below 34mph and reducing the turning circle by 1.1m, it’s markedly easier to manoeuvre at low speeds than competitors. At higher speeds the rear wheels turn with the front, boosting Autobahn-ploughing stability.

Don’t think this suddenly transforms the A6 Avant into a thrill-seeking sporting estate, because it doesn’t. This is still a car that majors on composure over fun, with neutral cornering behaviour and little in the way of entertainment. Its sheer width limits progress on anything other than wide, sweeping A-roads, although all of the Audi’s rivals are similarly afflicted.

Best, then, to enjoy the way the A6 feels completely unfazed by any situation you throw it at. It’ll rarely put a grin on your face, but the precise steering and prodigious grip levels are about as confidence-inspiring as cars in this class get. At the same time, its ability to eat up long distances and have you emerge in total comfort is up there with this category’s finest offerings. 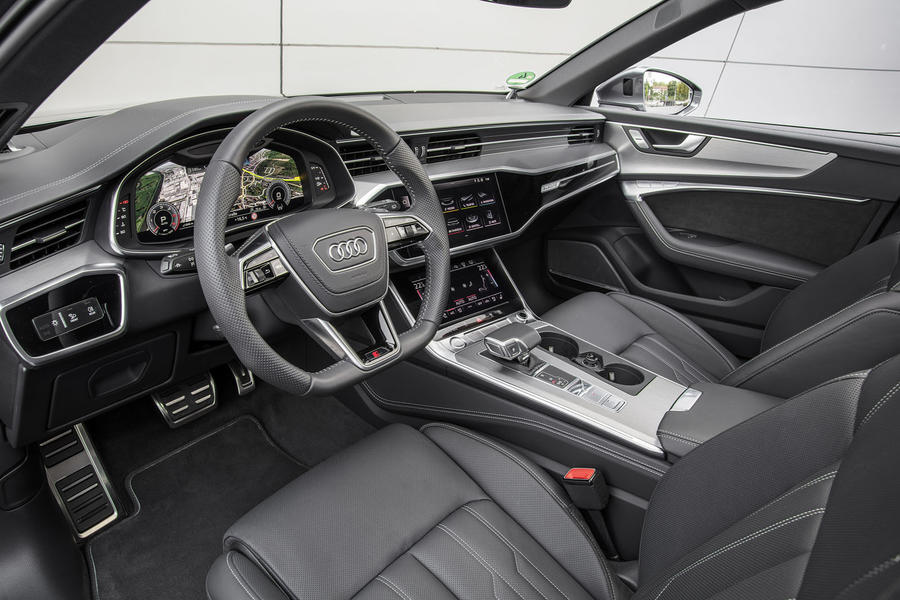 It depends what you want from an executive estate. Charm and character are in short supply here - the Volvo V90 and Jaguar XF serve you better in that respect. But the Audi corners with much more control than the Swede, and knocks the Brit for six when it comes to perceived quality, tech and space.

There’s a tougher distinction to make when it comes to the Mercedes-Benz E-Class, which matches the A6 for cabin wow factor, and beats it for space and long-legged comfort. While a back-to-back test will confirm for sure, we reckon it’s the ever-dominant 5 Series that poses the biggest threat to Ingolstadt’s offering.

Age-old rivalries aside, there’s no doubt that the A6 is finally the true all-rounder its maker intends it to be, particularly with the more modest diesel engine. In almost every respect it is an improvement on the old car.

However, given their dominance in the cabin, the new infotainment screens are a major bugbear for this tester, particularly given Audi’s exemplary reputation with ergonomics. With many rivals featuring easier control systems, it’s a blot on the A6’s copybook that shouldn’t really exist. 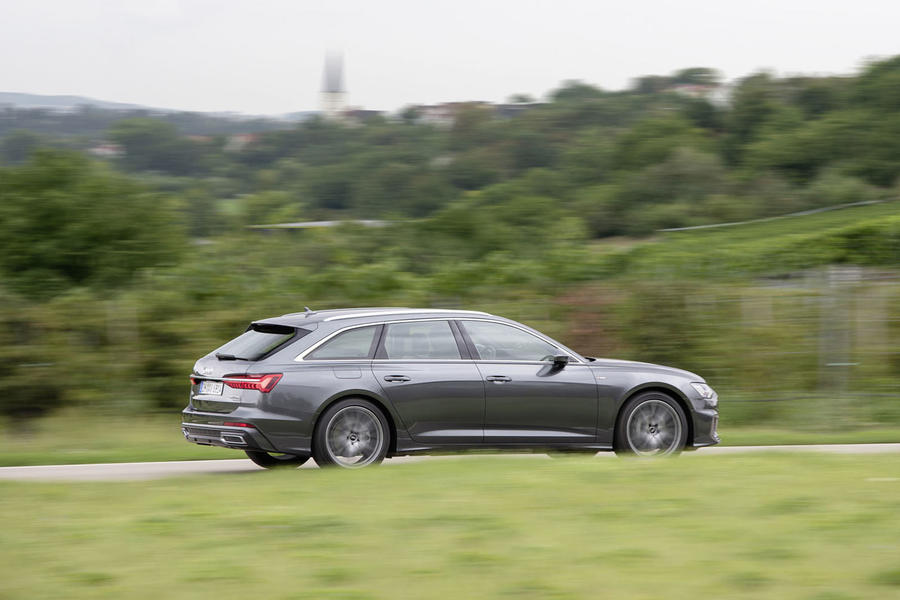 How I hate this Audi interior

How I hate this Audi interior ...

As discussed above, the replacement of (tactile) dials/buttons with (visual) touchscreens makes this an ergonomic disaster.

Having made an ergonomic compromise, one would expect a simple, minimalist interior as a result (like Tesla model S) instead Audi chooses to introduce odd shapes (instrument binnacle, the main touchscreen) that have nothing to do with each other, and adjacent elements are juxtaposed, not resolved.

Audi used to give me much visual pleasure, both inside and out, but Audi's recent models have turned from the simple coherent to the elaborate fussy. When the Skoda Superb estate is a much better proposition, there is no reason for this Audi to exist if not for the dubious allure of the badge.

Vs BMW 5 series and Skoda Superb

In my view, there are only three questions to answer to decide whether you buy an A6 Avant.

3. Does it drive better than a BMW 5 series estate?  If it does, buy the A6.  If not, buy the BMW which appears comparably spacious and comfortable.