From £65,3157
Expensive and flawed but this understated diesel-electric Audi Q7 has a lot to offer
Open gallery
Close

A plug-in hybrid (PHEV) version of Audi’s commanding full-size SUV, the Q7, and thus something to go up against similarly electrified luxury behemoths from Volvo, Porsche and BMW.

The Q7 e-tron uses a large six-cylinder turbodiesel engine mated to an electric motor that’s integrated into the transmission, the claim being that this powertrain will manage a combined fuel economy of 156.9mpg and emit only 48g/km of carbon dioxide.

That’s officially, at least. You’d have to ensure a substantial proportion of your mileage was undertaken in the car’s electric-only mode to achieve anything like those figures, so the powertrain’s worth is – as ever with PHEVs – going to depend on your driving habits.

Audi has been clever with the execution of this diesel-electric powertrain. The heat pump, for example, recycles that of the engine to warm the cabin without draining the battery. The car is also able to ‘coast’, the engine and motor being deactivated in the absence of any throttle input and offers haptic feedback through the pedal if it thinks you’re being a tad leaden-footed. 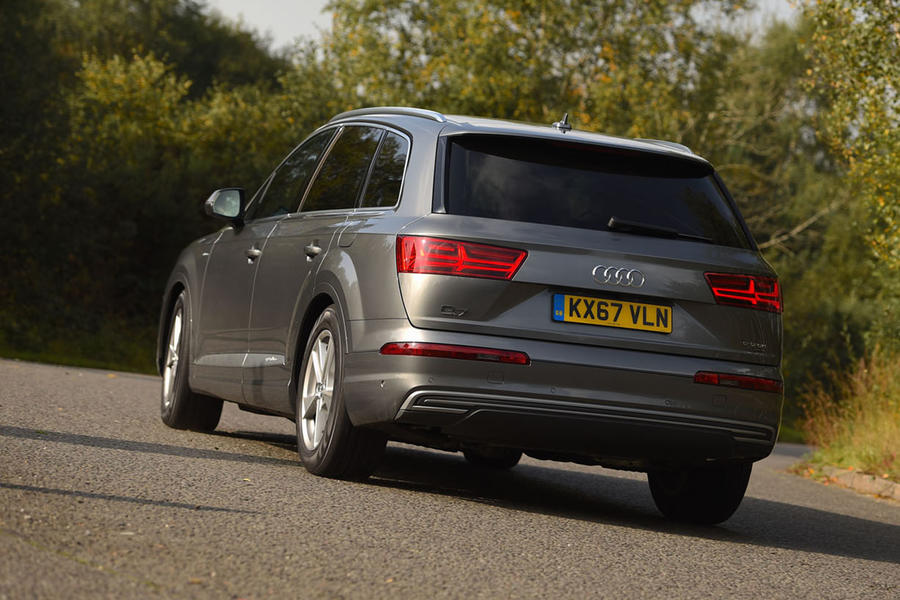 This is not the first time we’ve driven a Q7 e-tron in the UK. Indeed, we did so last summer on the occasion of its UK launch, following which customer deliveries were curiously delayed. And usefully so, if you went ahead and ordered Audi’s PHEV SUV – base price £66,510 – because, by way of apology, you’ll have been offered a discount that largely mitigates its £11,000 premium over the non-hybrid model. The official line is that capacity constraints for components specific to the right-hand-drive version were to blame for the yearlong hold-up.

Even without the financial sweetener, patient owners will probably take the view that late is better than never. This car’s torque-rich all-wheel-drive powertrain is so unobtrusively supple that it’s as though the entire thing – electric motor upstream of an eight-speed torque-converter gearbox, 3.0-litre V6 TDI up front – uses only a handful of moving parts. Along with the solemn chic of the interior, on crowded British roads the Q7 e-tron (equipped here with optional adaptive air suspension) delivers a cut-crystal tranquillity that will recalibrate your notion of refinement in the SUV segment.

The engine’s active mounts are partly to thank for this and use coil actuators to offset the tremors of internal combustion. The unit itself flexes an effortless 443lb ft from just 1250rpm. Along with the electric motor, the e-tron delivers a total 516lb ft. Apart from the brakes, which grab at low speeds because of the disjointed handover from regenerative braking to the real, hydraulic thing, this dual-source set-up is a graceful companion to the daily grind.

The Q7 e-tron usually starts in electric mode, the eerily distant engine only firing (with but a whimper) once the throttle pedal has been squeezed past a variable point of resistance in its travel. You may find this feature irritating, but if you’re at all interested in what this car is capable of, you’ll let it be your guide. The same applies to the car’s ‘predictive efficiency assistant’, which uses sat-nav data and active cruise control to determine the most effective division of labour between hydrocarbons and electrons.

At five metres long and 2445kg (375kg of which is e-tron hardware, and 202kg of that is attributable to the battery pack), to pretend this Q7 is nothing other than a tank would be disingenuous. And yet the heavily assisted but direct steering combined with the car’s electric surge means it never feels clumsy in town, where the optional adaptive air suspension almost makes speed bumps disappear. London’s rush hour, meanwhile – an environment many of these Congestion Charge-exempt cars will confront – yielded an electrical economy that equates to a range of 32 miles given the 17.3kWh capacity of the battery pack, which roughly aligns with the 35 miles Audi quotes. 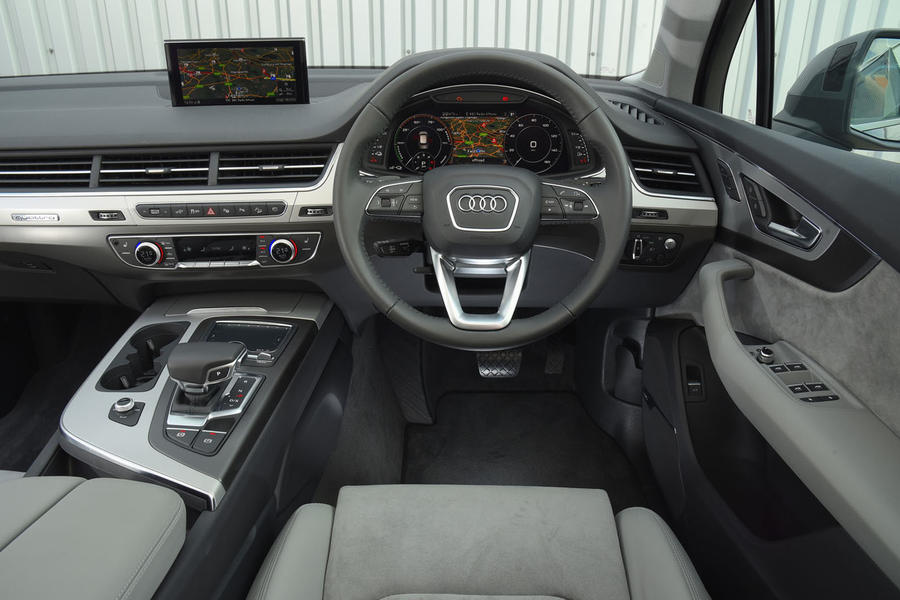 The hybrid Q7 still feels flat-footed on challenging roads and its brief is undeniably narrow. Those who drive high mileages will be better off with the diesel-only model, but if you have the requisite lifestyle for an SUV that comes with a charging cable, the Q7 is well worth a look.

There is, of course, Volvo’s XC90 T8 to consider. Using a 314bhp twin-charged 2.0-litre petrol engine paired with an 81bhp electric motor, it offers similar performance to the Audi but isn’t as refined and requires a more conscientious hand (and foot) at the controls to unlock its fuel-efficiency potential. You might also investigate BMW’s xDrive40e M Sport, although it matches neither the ambiance nor the practicality of its rivals. 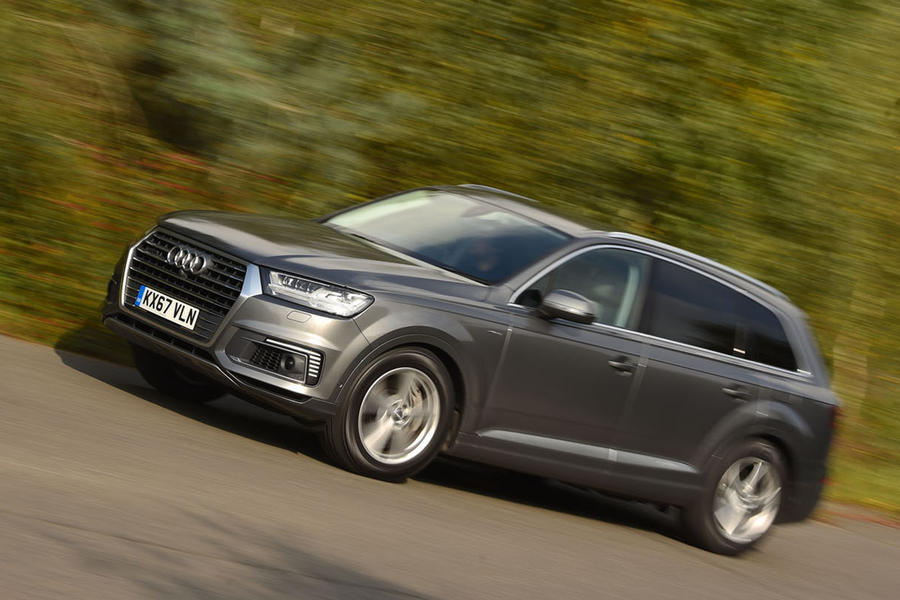 Long term fuel economy readout now showing 68 mpg after 5,000 miles in my hands.  Smooth as silk to drive but quite large for the country roads in my neighbourhood.  There is a rumour that new ones have been withdrawn from the UK marketplace, so it's going to be a rare car on the used market.

I bought a used one and it's exceeded my expectations - 52 + MPG in my hands and so 850 miles per tank of diesel.  It'll tow, it has road presence, drives beautifully and ticks all my boxes.  Waaay better than the petrol hybrid SUV I had before.  Only downside is it's a bit too big - I'd have preferred the same drivetrain in a Q5 but not availabe.

Plug in hyrbrid complexity and exhaust gas recirculation valves, the worst of both worlds.