From £39,5008
Does the combination of a creamy V6 diesel and Audi's trademark church-like tranquility translate effectively onto Britain's broken roads?
Open gallery
Close

We’ve previously driven the fifth-generation, C8-type Audi A6 and so know about its mild-hybrid powertrains, Audi A8-apeing bodywork and divisive infotainment system. A full road test will also follow, so the examination is far from over.

But this is the first time we’ve had one on British highways and in right-hand-drive specification. It’s therefore an opportunity to find out whether the engine room of Ingolstadt’s luxury line-up can reproduce the favourable verdicts gained abroad, particularly concerning its road manners.

Petrol and more fully electrified variants will follow, but for now the line-up is straightforward for prospective British buyers with a choice of either a 2.0-litre four-cylinder ‘40’ or the 3.0-litre six-cylinder ‘50’ turbodiesel engine. We’ve sampled the former in Avant form and considered it a likeable, no-nonsense large estate that sits right in the intersection of a Venn diagram plotting luxury and utility.

Trim choices are similarly straightforward: there is Sport as standard or S Line, which adds roughly £3000 to the 50 TDI’s £47,110 starting price. The latter adds Matrix LED headlights, 19in alloys, more aggressive S Line bodywork, leather and Alcantara sports seats, and a perforated leather steering wheel to a basic specification already brimming with safety and infotainment technology.

Audi could, were it so inclined, build a saloon every bit as appealing from behind the wheel as a BMW 5 Series, but it chooses to fight on a different front and spend its development budget elsewhere. As ever with the A6, a large part of that ‘elsewhere’ is rolling refinement.

Worrying, then, that tranquillity isn’t a given. The bulk of entry-level 40 TDI cars (note, these are only available in front-wheel-drive configuration) will use the passive suspension setup that’s standard on both Sport and S Line models. In the interests of body control and – we shouldn’t pretend otherwise – kerbside stance, on S Line versions the steel springs are 20mm shorter. We briefly tried such a car and while the resulting ride is nicely taut, on British roads it was also too busy, too much of the time for a limousine of this ilk.

You can add some adaptive functionality to the dampers for an extra £1150 – we haven’t tested these yet, though it’s likely the Comfort setting would improve matters – but the majority of 50 TDI models will be ordered with £2050 adaptive air suspension.

It’s an expensive option but with it this quattro chassis better mops up everything from the perma-jostle of corrugated B-roads to the gentler, low-frequency motorway undulations. Severe impacts from potholes and the like can announce themselves with something of a 'thwack' and the pneumatic springs further numb the driver from what’s happening down at road level, but the spacecraft glide big Audis are known for is present and correct.

In fact the A6 rides beautifully on its air springs, softly bracing the body over peaks, through troughs and resisting well the sort of pitch and roll movements that can easily overwhelm a 1900kg saloon.

Less convincing is the £1950 Dynamic all-wheel steering, which undoubtedly gives a very large car surprisingly agility through slower, tighter bends but to such an extent that it can feel quite unnatural. City-dwellers will like it but we would happily do without the need wind off lock unexpectedly. Moreover, it does nothing to enliven the driving experience.

You might put the money ‘saved’ towards having the V6 TDI in the car’s engine bay, as opposed to its smaller, more ordinary four-cylinder sibling.

This unit’s turbochargers abruptly awaken just shy of 2000rpm, but from thereon until the far side of 4000rpm there’s effortless motive force thanks to peak outputs of 457lb ft, which is nothing short of vast, and a healthy 282bhp. It’s enough to haul the 50 TDI chassis – longer, wider and taller than before – to 62mph in 5.5sec. That’s significantly quicker than the 8.1sec of the 40 TDI but a shade slower than rivals from BMW and Mercedes. On the move, speed nevertheless accrues at an alarming rate, and in subversive fashion.

But performance is only a small part of it. The larger Audi engine is tremendously well mannered, remaining almost inaudible at a cruise, though it wouldn’t offend the ears even were it not. Meanwhile the eight-speed automatic transmission is slick most of the time but can occasionally hiccup at town speeds. On open roads there’s barely a break in the flow.

Except when you’re in the car’s most economical mode, that is, when there is a very definite break in the flow. This is because the 48-volt system allows the engine to shut down completely if it’s not needed for a several moments, and then reignite when the throttle is depressed. It’s a nicely calibrated process that doesn’t frustrate, and helped our test car achieve a touring economy approaching 50mpg. 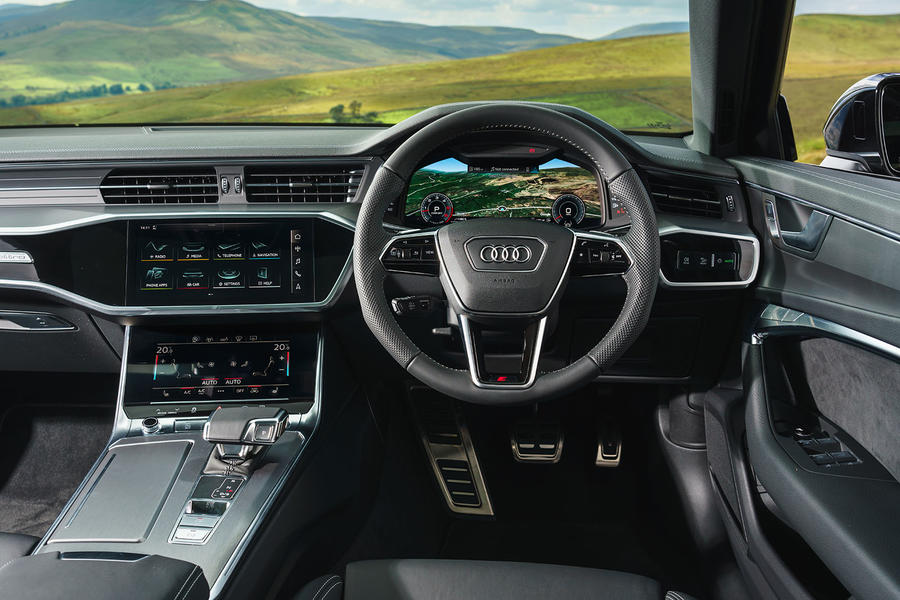 So capable is the A6 50 TDI that it’s easier to list the reasons why you wouldn’t buy one.

For one, unless this car’s particular brand of clean-cut droid-chic appeals, you’re unlikely to find it as likeable as many of its rivals, notably the Volvo S90. Perceived quality within the church-like expanse of the cabin is so great that it does yield a cosiness, mind.

For another, despite the broad competence of the chassis, the Audi is not as satisfying a steer as a BMW 5 Series or Jaguar XF. This is old news, but we’re not talking only about committed driving here – simply the subtle, sporting stance those cars take through corners, even at moderate speeds.

The controls in those rivals are more naturally weighted and the chassis palpably pushed from the rear axle. As such, if you enjoy not only arriving in comfort and style but also the act of driving, you’re courting disappointment in the A6.

Where the Audi excels is the manner in which it isolates its occupants on threadbare British roads. In fact the ambience is comparable to the previous generation of flagship saloons, such as the Audi A8. Air suspension and the cultured, muscular efforts of the V6 are not cheap – £9000 more than for the entry-level 40 TDI – but together they raise the game of A6 to opulent heights.

None of the used 50tdi s for sale have air suspension

As i thought when i rad this first time rare as hens teeth.

Air springs on all versions will be rare as hens teeth.

Just rubbish to say most 50s will come with air springs. It will be special orders at lower discount.

"Audi could, were it so inclined, build a saloon every bit as appealing from behind the wheel as a BMW 5 Series, but it chooses to fight on a different front and spend its development budget elsewhere"..how do you know that?