This will sound like tone-deaf blasphemy but the towering, 2.2-tonne Aston Martin DBX 707 is the best car the British car firm makes.

Aston Martin clearly knows this, and wants us to know it, too, which is why our first taste of this 697bhp crossover on British roads follows a substantial test in Sardinia and, before that, a Pirelli-smoking go behind the wheel of a validation prototype at Aston’s Stowe Circuit test track at Silverstone. In general, you don’t trail a duffer this assiduously.

Bluntly, neither can the 707 afford to be anything of that sort. Despite the £190,000 asking price – £18,000 more than the regular Aston Martin DBX – the British maker hopes the new car will make up as much as half of DBX sales. And because the DBX already accounts for roughly half of Aston’s total annual sales, the fiscal benefits of the 707 being not just good but brilliant – and an unambiguous sales success – are clear. Especially when you’re in quite a bit of debt.

But the car itself. Whether or not the beefed-up, hunkered-down aesthetic appeals to you will be personal, but in objective terms, the more you learn about the 707, the more reasonable the £18,000 premium seems. Perversely, the 707 even starts to look good value compared with the base DBX, because the changes Aston has made are not simply of a magnitude to what, say, Porsche achieves when it converts 911 GT3 into GT3 RS, but closer to what it achieves when transforming garden 911 Carrera into diamond-edged 911 GT3. 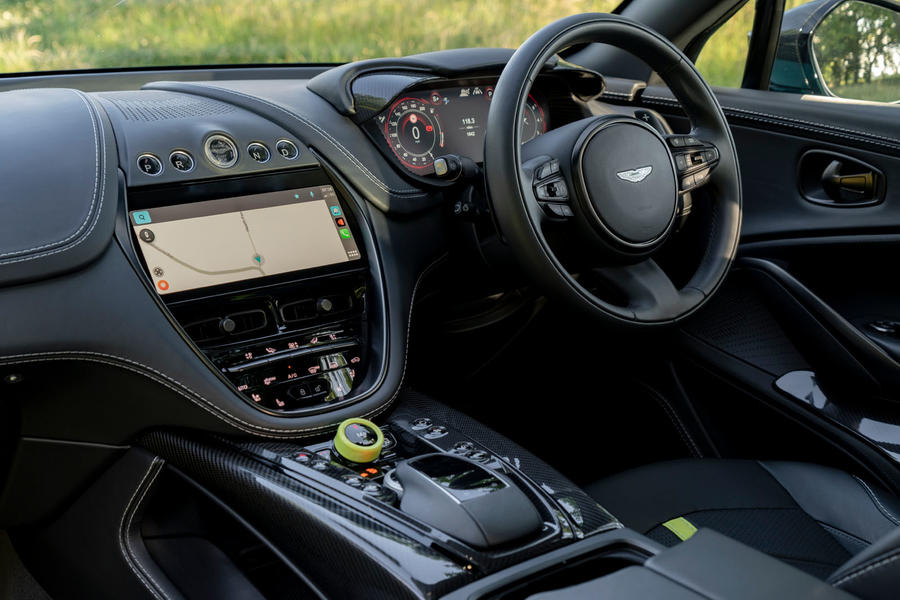 As the name suggests, power climbs, from 542bhp at 6500rpm to 697bhp (707PS), arriving 500rpm earlier. This isn’t mere software trickery. While the regular DBX sources its turbos from the Mercedes-AMG GT 63 4-Door Coupé, the 707 borrows the larger, quicker-spooling, ball-bearing-equipped, 160,000rpm blowers of the GT Black Series. The electronically controlled differential in the back axle is also upgraded, the 707 receiving the unit from the GT 63, which offers about 15% more clamping force than the E63 S-sourced unit in the standard DBX. As with the power hike, neither is this new diff plug-and-play: being 20kg heavier, the rear driveshafts have required reinforcement.

The GT 63 also donates its ‘wet-clutch’ nine-speed gearbox, which not only withstands the 707’s hulking 664lb ft (up 148lb ft) but is also said to improve throttle response and shift speed. For similar benefits, the propshaft has marginally better torsional stiffness.

A lot of work, then, even before you get to the new double-stacked outboard rads, which sit behind bodywork with 30% more intake area and the potential for 80% more mass airflow than that of the regular DBX.

Cooling ensured, and DBR9-style rear diffuser fitted, the resulting performance is every bit as stark as the claimed 7.4sec 0-100mph time suggests (which, by the way, is half a second quicker than even the hardcore Vantage F1 Edition, aka the Moers Special). In any gear, from all but the most lethargic crankshaft speeds, the 707 darts forward viciously and then proceeds to bury you into its resculpted semi-bucket seats without any trouble at all, if also without quite the extraordinary, supercar-esque force the official literature would have us believe.

Perhaps the chassis is to blame. So eerily effective is this set-up in balancing control and compliance that it dilutes your perception of speed. The 707 uses the same Bilstein DampTronic struts as the standard car (also found on the latest Mercedes S-Class), only with altered valving to give the car a greater feeling of muscular intent without hurting the existing, exemplary long-wave gait of the DBX.

Along with the fluidity with which the car covers ground, the almost total lack of hard edges to the ride – even on vast, 707-specific 23in wheels – show the changes have worked beautifully. New hydrobushes, rather than an elastomer material, are said to be particularly expensive and also play their part in allowing the struts to move fore and aft in relation to the road surface, only without hampering steering precision (which is further helped by a new sheer panel that stiffens the front subframe).

That remarkable precision is at odds with the car’s thuggish appearance, and credit must go as well to the 707’s standardfit carbon-ceramic brake discs, which save 40.5kg in unsprung mass. 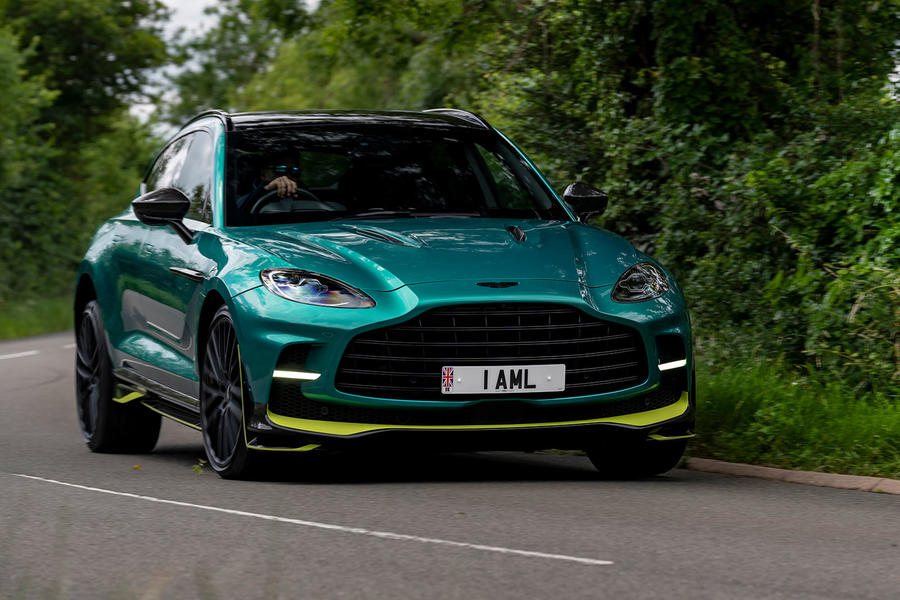 So the 707 canvas is very good, bordering on brilliant. Handily, the handling is equal to it. So balanced and in certain cases adjustable is the hottest DBX that you might even wonder why four-wheel drive hasn’t been deployed for the Vantage or DBS. (Unsurprising answer: complete re-engineering of the platform would be required.)

The 707 has four drive modes selected by a manettino-style knob on the transmission tunnel, but the Comfort and Sport settings are all you’ll ever need. Cornering in either mode, although particularly in Sport, entails positive, crisp turn-in followed by an enjoyable softness at the rear axle, with torque used to easily overcome the natural, faintly nose-led stance the 707 tends to adopt.

The active anti-roll bars, which are operational at all speeds and in every driving mode, play their part. They don’t only slacken on the straights for better ride quality. By shifting the 707’s roll centre from front to rear during cornering, they work together and contribute to the car’s combination of taut, reactive initial direction changes followed by a more forgiving and indulgent tail on exit. The big Aston is a little like Alfa Romeo’s Stelvio Quadrifoglio in this respect.

Ultimately, no other super-SUV feels as intuitive as this new DBX. To guide along good roads, it is truly satisfying, and the comprehensive 707 chassis revisions allow the car to feel a great deal more manageable and dynamically deft than its weight and dimensions suggest. You can also take fine everyday road manners and proper suitability for long-distance escapades for granted: given what it will do on an interesting B-road, the 707 laps up motorway work.

Whether it also laps up prospective patrons of Porsche and Lamborghini remains to be seen, but it certainly deserves some success in this regard.

Plenty of words on the Sports side of this SUV, but none on the Utility side of it? How comfortable/accommodating are the rear seats and boot? If all you want/need is a sports car, surely a sports car is a better bet than a compromised SUV?

Read the launch review.  This one covers just the changes on this revised model.

Just Saying 25 July 2022
Great read Rich.
I am a fan. Porsche patrons are very loyal to their brand. Lamborghini customers however may well move toward AM methinks.
The shuve you felt off the line must have been truly remarkable!?
The Apprentice 25 July 2022
I love the rear of these, captured Aston Martin DNA. But the front is unfortunate, since Ford pinched AM designs, you end up with a 180K car that looks too much like a 25K Kuga

Also don't like the Black interior in any Aston, maybe just me, but I never relate Black interiors to luxury as on most cars its the base option. Presume you can order in a different colour.

Anton motorhead 27 July 2022
Absolutely agree as to black interiors. They look cheap and sombre and have no elegance. Besides they get awfully hot in the summer and you see every speck of dust on them. I know from experience as my car has a black leather interior - it's awful.
View all comments (5)