Mind-bending performance for an SUV with a chassis to match, yet not at the cost of everyday road manners

A headline power output can often give the biggest clue to a car’s positioning in a line-up. In the case of the Aston Martin DBX 707, that 707PS (or 697bhp) is the highest power output yielded to date from Mercedes-AMG’s superb twin-turbocharged 4.0-litre V8 petrol engine, which quickly signifies the latest version of the SUV as the range-topper, and by some margin.

That it indeed is. Yet this is a high-performance range-topper that goes far beyond the usual ‘uprate it, lower it, stiffen it’ approach, being more akin to a facelift or a remastering. The Aston Martin DBX done better, in other words.

Not that the DBX was wanting for much. It got a four-and-a-half- star Autocar road test rating less than two years ago, after all.

Yet since then, Aston Martin has appointed a new CEO in Tobias Moers, who has already overhauled the Vantage with the Aston Martin Vantage F1 Edition (effectively the car that he thought the Vantage always should have been), and now it’s the turn of the DBX to get a similar treatment. The brief for the DBX 707, in development for only 14 months, was thus: become a performance flagship without sacrificing the DBX’s long-legged grand touring credentials.

The DBX 707, which our heart rate has only just recovered from meeting a prototype on track at Silverstone last month, is quite something visually, for starters.

Most of the styling changes are necessitated by the need to increase cooling (the front daylight-running lights have had to be redesigned, for instance) and to then improve the aerodynamics and reduce drag.

2023 Aston Martin DBX S: super-SUV could get V12 power
Advertisement
Back to top

The rear spoiler is a working part in this regard (yes, we really have reached the point where SUVs have functional rear spoilers), as is the Formula 1-inspired double diffuser, within which sit four exhaust pipes.

What could be quite a brutish design with all that performance addenda still successfully stays on the right side of thuggery to these eyes. And the larger (23in) alloy wheels, behind which sit enormous 420mm front and 390mm rear carbon-ceramic brake discs, actually make the 707 seem even better proportioned than the standard DBX.

There are more changes to the bits you can’t see. The basic architecture of the suspension is retained but is completely retuned to give the DBX 707 “the cornering agility, sporting feel and dynamic character of a true sports car”. Bold claims. 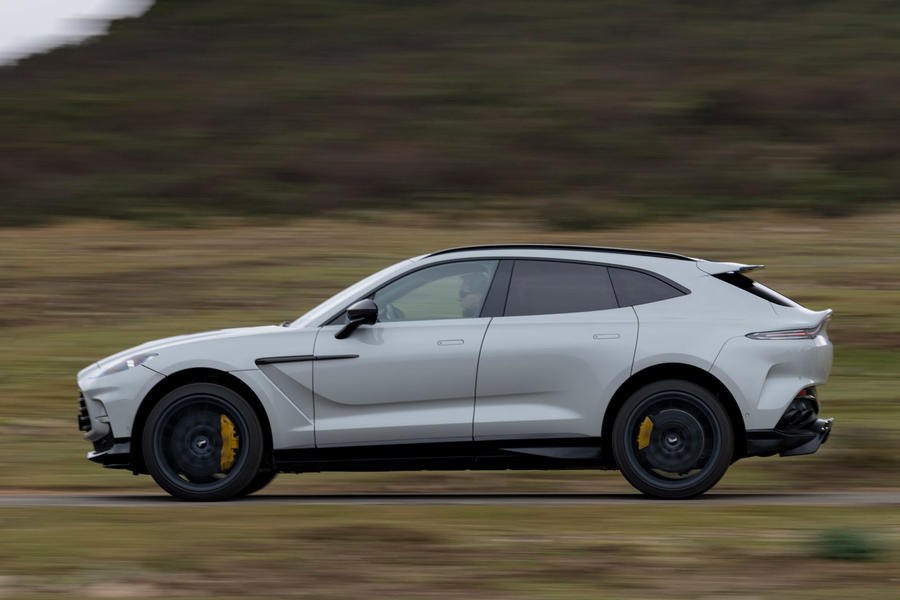 The steering is retuned, too, for improved feel and an increase in effort build-up off-centre, while more revisions are applied to the active ride control, electronic differential, four-wheel drive system and electronic stability control system to improve agility and try to create that sports car vibe. Again, all with the caveat of not ruining everyday compliance.

To complete the dynamic overhaul, the peak power and torque outputs are upgraded by figures more than adequate to power a cooking family hatchback. Power climbs 155bhp to 607bhp and torque climbs 148lb ft to 664lb ft, largely made possible by changes to the induction system and new ball-bearing turbochargers.

So when you start it up, you’re expecting a bark those in the neighbouring village would hear. But no: Aston’s engineers have actually made the start-up quieter so as to be more sociable, although the aural theatre can still be experienced if you pull on one of the paddle shifters before hitting the starter button.

Driving at low and moderate speeds is far less intimidating than you might expect on first acquaintance. The default GT driving mode is very well judged for everyday driving. The major controls are nicely weighted, visibility is good enough and the car is suited to being driven at more relaxed and sedate speeds. It’s quite happy to make quiet, comfortable progress without straining to show off some of its numerous party pieces. This is a welcome carry-over from the standard DBX.

As a nitpicking footnote to the everyday performance, while those bigger alloys and brakes do actually help to reduce unsprung mass by around 40kg, the secondary ride is still a touch firm and gets unsettled by the worst scars in the road.

The most obvious and addictive of those new party pieces is what happens when you plant your right foot. Good God, this is a quick car. Explosively so. We’re becoming immune to rapid 0-60mph times these days, as even common EVs can humble supercars in this regard, but we’re talking 3.1sec here in something weighing more than 2.2 tonnes. That’s staggering.

Even more staggering is what happens after that initial 3.1sec. It simply doesn’t seem to let up, delivering acceleration with the same force well past 100mph. You will give up before it does.

There’s seemingly endless traction, and the new wet-clutch nine-speed automatic gearbox is a more than willing accomplice in such an assault on your senses – something best experienced in the sharpest Sport+ driving mode (which is accessed by a simplified driving mode controller on the centre console). 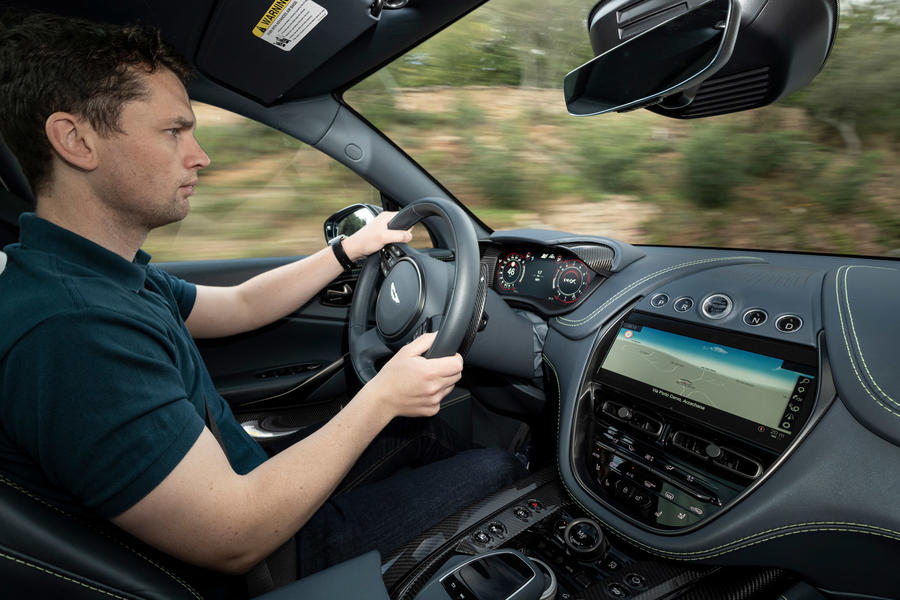 The chassis is comfortably able to handle all that extra performance, too. The test roads we encountered in Sardinia are surely some of the best in Europe: wide enough to accommodate such a big and heavy car, interesting and twisty enough to make you want to turn around and attack the road again, and challenging enough, with surface changes, crests and cambers, to really expose a chassis not up to the task.

The DBX 707 is a joy to drive on them. The upgraded steering is rich in precision and feedback, most impressively, while it’s genuinely a fun car to pivot through a series of fast corners.Physics kicks in eventually in slower corners for some understeer, but the DBX 707 can still be as tail- happy as you dare with a playfulness on the throttle (you can even turn the traction control fully off if you have taken your morning brave pill).

If such effusive praise needs a qualification, it’s this: the DBX 707 is a tall car by its nature, and of course also a very heavy one, and it still feels unnatural, if not unnerving, to load up the outside tyres througha corner too much for the ‘what if?’ fear. The anti-roll system does a good job in trying to overcome some of the physical limitations, but you still never quite push as hard as you would in a supercar.

The question of why you would want to push a car like this that hard in the first place isn’t lost on me, yet such is the world we live in today and the performance cars being created.

There’s nothing modern and progressive about the economy, though, which is frankly laughable. But let’s be honest: that’s not going to be a deal-breaker for a DBX 707 buyer. It’s officially 19.9mpg, but drive with any enthusiasm and you won’t even reach the teens.

A plug-in hybrid version of the DBX is understood to be on its way next year, in case you were wondering – not that Aston plans on tuning that for economy, by all accounts...

A huge frustration is that the standard DBX infotainment system remains. It’s badly in need of an update in terms of both the software running it and the hardware controlling it. For a car that most buyers will spend more than £200,000 on after options, it feels a bit embarrassing. We will have to wait until the DB11 facelift in the coming months for this to start to be addressed in the Aston range.

There are some changes inside, though, most notably seats that look great and offer all the support you could ever need. 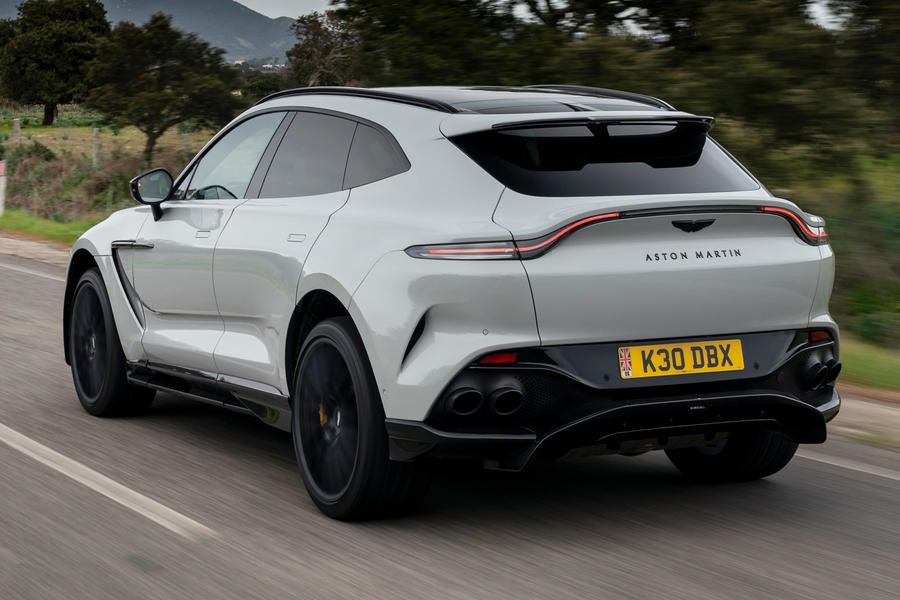 And the DBX 707 is all the DBX – or even more pertinently, all the super-SUV – you’re ever likely to need. That Aston has done so much to the performance while at the same time retaining most if not all of the comfort and GT prowess of the original is some achievement. Surely no other rival will be able to keep up with it, or display such a breadth of abilities.

It really is the DBX done better.