You've got to give the sensational, certified five-star DBS Superleggera an even greater sense of occasion. What are your options?

Lurid orange paint helps, but you could also remove the roof, which is what Aston Martin has done to create the DBS Superleggera Volante: a 715bhp, twin-turbo V12-engined super-GT that will hit 211mph even when the canvas is hidden beneath the rear deck. They say this is the fastest series-production soft-top currently on sale, but it hardly needs to boast. Just look at it.

Up close and personal, the Volante looks every nut, bolt, contrast stitch and composite fibre its £247,000 asking price. It doesn't have any true direct rivals – not unless Ferrari does an 'Aperta' version of the 812 Superfast – and so the fact it costs roughly £50,000 less than an Aventador S Roadster and the same amount more than Bentley's new Continental GTC is neither here nor there. You do pay £23,500 extra over the DBS coupe, though, and here's why.

The entire front portion of the car – massive maw, carbonfibre clamshell bonnet and double-wishbone suspension included – is carried over, but accommodating the roof mechanism from the DB11 Volante meant relocating the front/mid-mounted engine’s sizeable particulate filters outboard and rotating the 78-litre fuel tank.

The inconvenient knock-on effect was that the rear bodywork needed a total redesign, panel by panel, in order to retain visually the same heavy-set but perfectly proportioned musculature as the coupe. The tail now sits a fraction lower, and the gurney flap does without its secret, downforce-developing C-duct, but wearing a set of new forged 21in wheels, the car certainly looks no less attractive for it and the coupe’s character is indeed preserved. 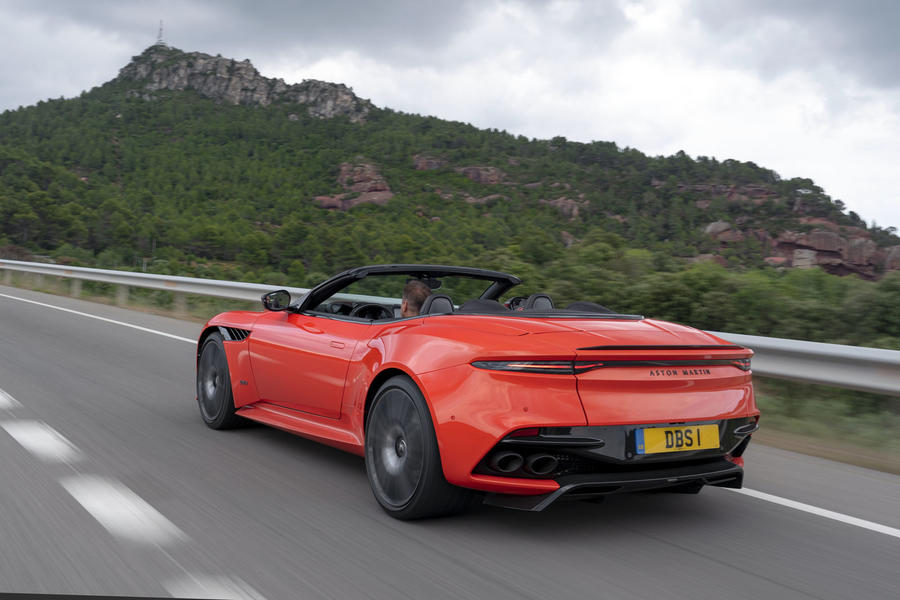 So does the same apply to the dynamics?

Nearly. The rear spring and skyhook damper rates are increased to cope with an additional 100kg of mass (not all of it in the roof mech; the sills are reinforced and there’s also a new rear cross-brace) but the setup is tuned to mimic the coupe’s specific – and excellent – blend of handling and ride comfort.

It’s mostly there, not least because the Volante is very nearly as stiff as the coupe with the roof up, and you lose only 5% of that rigidity when you peel back the canvas. However, the extra weight robs it of those last few degrees of composure on less than perfectly surfaced roads, and in terms of all-round dexterity. There are modes for the suspension, and in their firmest setting the dampers do a very good job of keeping body control close without shattering the ride quality, but at speed that back axle is less poised than with the coupe, and more prone to a shimmy. It's marginal, but it's there.

This car doesn’t feel quite as breathtakingly quick as the coupe in a straight line, either, although that is a relative observation: with 663lb ft the Volante still accelerates to 100mph in less than seven seconds, and a mere half-second slower than an Aventador SVJ. For a device with so much dynamic polish and long-distance comfort relative to the mid-engined Lamborghini – plus the versatility of rear seats (whether you use them to store small children or leather duffel-bags is up to you) – that's absurd.

Elsewhere there are even improvements over the coupe. Shifts for the torque-converter transaxle have been ironed out at lower engine speeds and following feedback from owners there’s now less servo-assistance for the carbon-ceramic brakes, which feel more natural. These things matter, and once acclimatised to its sheer scale, the Volante is perfectly docile when loping along at great speeds with the damper rates dialled back and the roof lowered, which takes 14 seconds and can be done at up to 31mph, or using the key fob when you're parked up.

Equally, dip the throttle for a 5.2-litre open-air locomotive thrash. Forced induction means this 'Cologne' V12 nevers howls like the 5.9-litre in the old DBS, but the exhaust tuning is pretty flamboyant in the most aggressive engine mapping and it's a smooth, bellowing soundtrack.

Aston's strong grasp on what makes a good electrically assisted steering rack is also very much in evidence. With what is presumably quite a tightly wound mechanical limited-slip differential between the rear wheels, it can take a little more heft than you're expecting to get the long nose turning, but the response is clean enough and at 13.1:1 and 2.27 turns lock-to-lock, this setup feels perfectly geared for super-GT duties. There's weight but also proper feel, and your connection with the road is on another level to what rivals from Ferrari and Bentley manage. 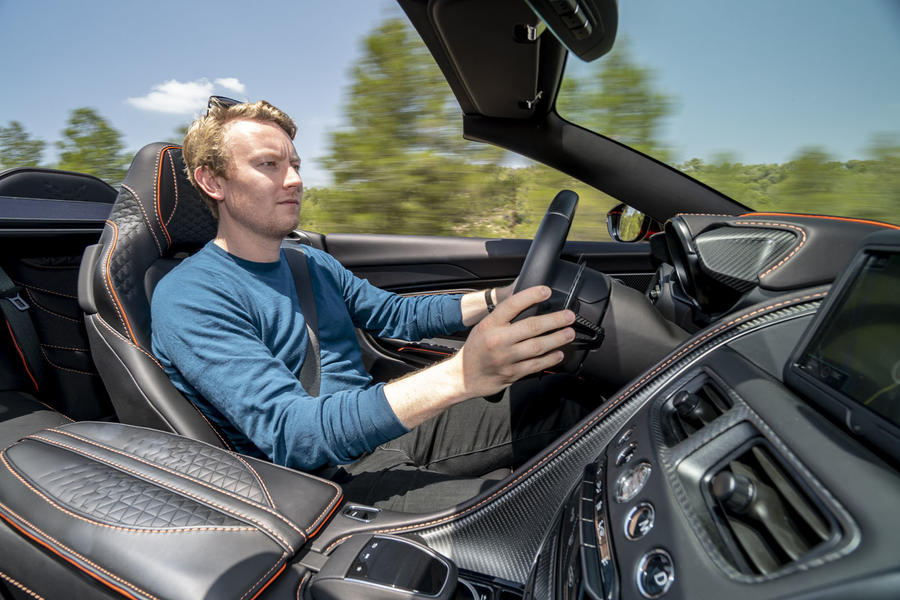 Niggles? There are a few. Despite the asking price, even with the roof in place there is too much wind noise at speed – more than you'd get in a Ferrari Portofino (which has a folding hard-top) and, we suspect, the new Bentley Continental GTC. Boot space is also meagre and the old Mercedes display electronics still suffer from considerable lag.

The 'superleggera' moniker was also pushing it somewhat even on the coupe, and with two people aboard the drop-top surpasses two tonnes. Hardly super-light, is it? And the effects of that weight are detectable enough that we'd opt for the fixed-head DBS much more often than not.

But you'll forgive it all that. Of course you will, because the Volante is still a very credible driver's car with effortless V12 thrust and dynamite presence, especially with the roof down. It's also absurdly good company, and above all remains a phenomenal GT car. 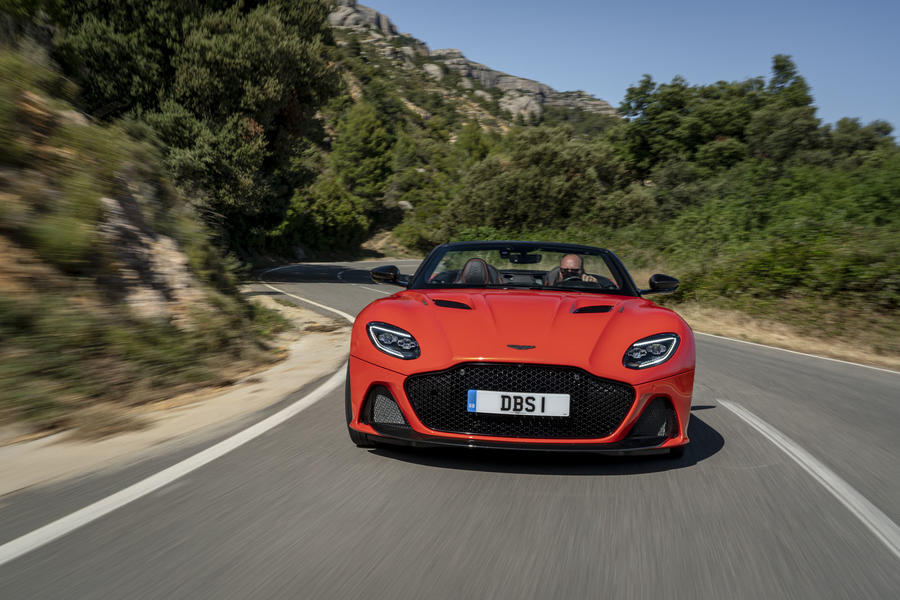 I wouldn't say much because the writer really did a fantastic job here..

such a lovely car this one is my favorite, I really want to buy this one I am here to read its views and very well impressed. Being a fashion designer at Men Cotton Jackets I don't have much knowledge about cars.