Its maker would probably tell you the B3 Touring is the only car you’re ever likely to need.

In fairness, this isn't an outrageous claim. The new Alpina B3 Touring represents a thorough going-over of the already impressive BMW M340i Touring, though even this description sells it somewhat short.

Alpina’s aim is to create something just as quick as an M3 in the real world but with appreciably better road manners and easier drivability, not to mention far less aggravated looks. Obviously something has to give, and in the case of the B3, that something is track-day aptitude – the hard edge of control and anger that M-division wares need to have.

But when was the last time you took your estate car for some hard laps?

The B3 – both in Touring and saloon forms – is unashamedly set up for the road, and while Alpina does some fine-tuning work at the Nürburgring (ABS tuning etc), it mainly tests on German country routes. And of course the autobahn, where its fastest conversions now top 200mph.

The modifications for the B3 include altered suspension geometry for more natural steering feel and stability at very high speeds. There’s also upgraded brakes, Alpina’s unmissable wheel-and-tyre package, some aero addenda, and specific tuning for the rear limited-slip differential and the division of drive between the front and rear axles.

That’s right: the B3 now comes only with four-wheel drive, which might disappoint some, though the truth is that rear-wheel drive isn’t so popular among owners of these ‘everyday supercars’, especially in Alpina’s home market. There’s also the small matter of stability and traction, not least because of what now lurks in the car’s engine bay.

This is the first time the B3 has ever used an adapted version of an M-division engine instead of the ‘ordinary’ six-cylinder found in more commonplace 3 Series derivatives. The S58, which serves in the X3M and will soon appear in the M4 and M4, takes the form of a 2993cc twin-turbo unit, though Alpina fits its own turbine housings and comprehensively beefs up the cooling apparatus.

The result is 456bhp and 516lb ft – the latter being the reason why the car’s eight-speed ZF gearbox and driveshafts have been reinforced. By comparison, the M3 Competition that we’ll get here in the UK makes 503bhp but only 469lb ft, and so the two cars have an identical 0-62mph time of 3.8sec. 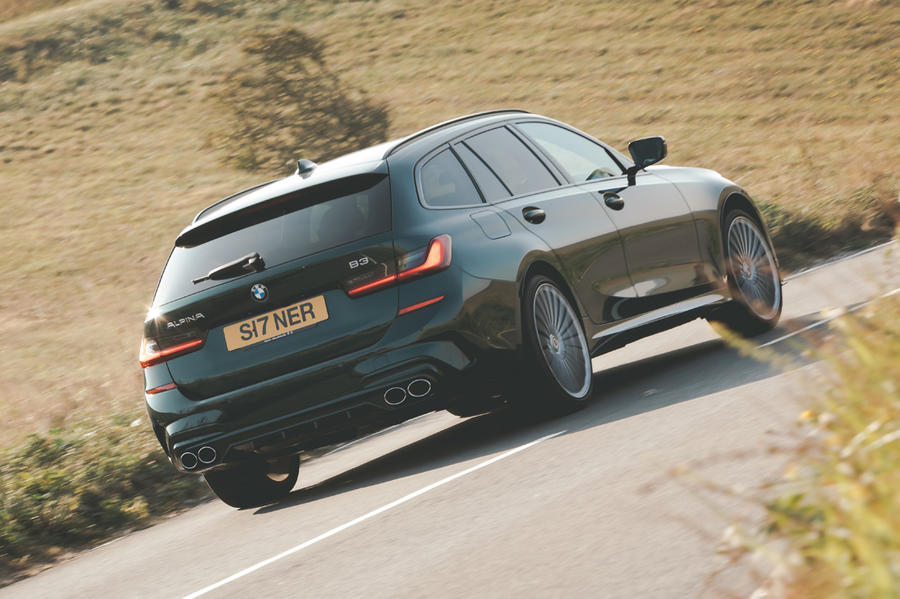 Two things quickly become clear. The first is that, while BMW has given Alpina an unusually good base to work from, the B3 Touring is extraordinarily well-rounded.

Take it as read that the 3 Series Touring now feels ideally sized for fast family-car duties. There’s plenty of space inside and you get a real sense of maturity on the move, but the car avoids the occasional awkwardness that comes with driving something as large as the 5 Series Touring – or Alpina’s V8-engined Alpina B5 Touring – through towns and along B-roads.

Compared with the M340i, what the Alpina then gives the driver is, simultaneously, a more connected feeling with the road and, in the unique Comfort Plus damper setting, the ability to tread and move more fluidly over all but the roughest surfaces. It’s an extremely neat trick, even if this car’s optional 20in Alpina Classic wheels and 30-section sidewalls can still generate a slight fidget and are marginally noisier than you might expect (though these are well within acceptable levels for something of this performance potential). In short, in normal driving, the B3 covers ground in more satisfying fashion than the M340i, and indeed its esteemed rivals from Audi and Mercedes.

The second thing is the mad adaptability of the car’s temperament. The previous-generation B3 and its B4 coupé sibling had a tendency to step off the mark quite abruptly and the torque delivery thereafter was, in a word, boosty. This new car seems considerably more deft when you’re just mulching around with the engine below 2500rpm, which is when the performance really starts to kick in. The powertrain is softly but muscularly responsive, the steering well geared and weighted, and the whole show just very easy and comfortable to live with. Sinking into the optionally Merino leather-clad seats for an hour or three is no chore at all, whatever the environment and conditions you’re travelling through.

Knock the powertrain and chassis into Sport or Sport Plus, though, and you’ll begin to discover the other side of the B3 Touring. The car never comes over as raw as the Mercedes-AMG C63 Estate, or as fun-loving, but it really is unspeakably quick. And despite the fact Alpina has shifted the default torque-split subtly forward in comparsion to the M340i, it feels thoroughbred on the move. There is balance, poise and composure in abundance.

Another realm in which this car obviously exceeds its predecessor is in body control. There’s enough roll to keep progress feeling natural and, by extension of that, confidence-inspiring, but barely an iota more. Hit an off-camber crest at what feels at least 30mph too fast and this chassis just breathes it in then almost immediately resets. Such control allows Alpina’s suspension geometry to work at its communicative and accurate best, and so while an RS4 might pull bigger lateral g-forces, average drivers will probably feel more comfortable pushing the Alpina to its limits. Equally, there’s clearly enough here to keep the connoisseurs happy: the B3 Touring flows beautifully and when you want to drive the thing very hard indeed, the chassis and powertrain respond in kind. It’s difficult to imagine the car getting flustered.

There are, of course, further factors that’ll determine how well this car scores in any full road test. Fuel economy and touring range are important for an everyday machine, and we’ll assess those in due course. 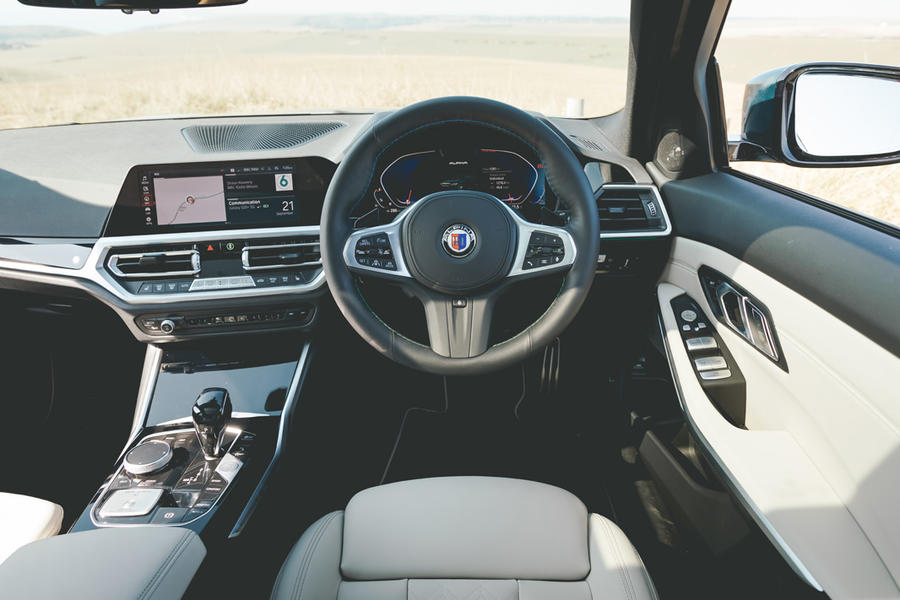 Frankly, the real question here is ‘can I afford one?’. Because on first impressions, the B3 Touring does enough to sit at the top of an already extremely talented and tempting mid-ranking super-estate clique.

It’s a more affable everyday companion than the hot-rod V8 Mercedes-AMG C63 S Estate and more engaging and sweeter to drive than the dead-pan Audi RS4. It could be quicker than either, too. We’ll soon find out. As for character and exclusivity, Alpinas rarely lack either quality, and you’re more likely to spot an Aston Martin DBS Superleggera on the road than you are another B3 Touring.

The price, of course, is high for a 3 Series. But even at £68,000, the Alpina splits the Audi and the Mercedes on initial outlay, and is well-equipped. Tally up what’s included and what isn’t and you might be surprised to find that the B3 Touring is actually the least expensive of the three like for like.

Given all the above, perhaps you can understand why, at least at this early stage, it’s provisionally five stars for the Alpina B3 Touring. Stay tuned for the full road test, but in short: what a wonderful machine. 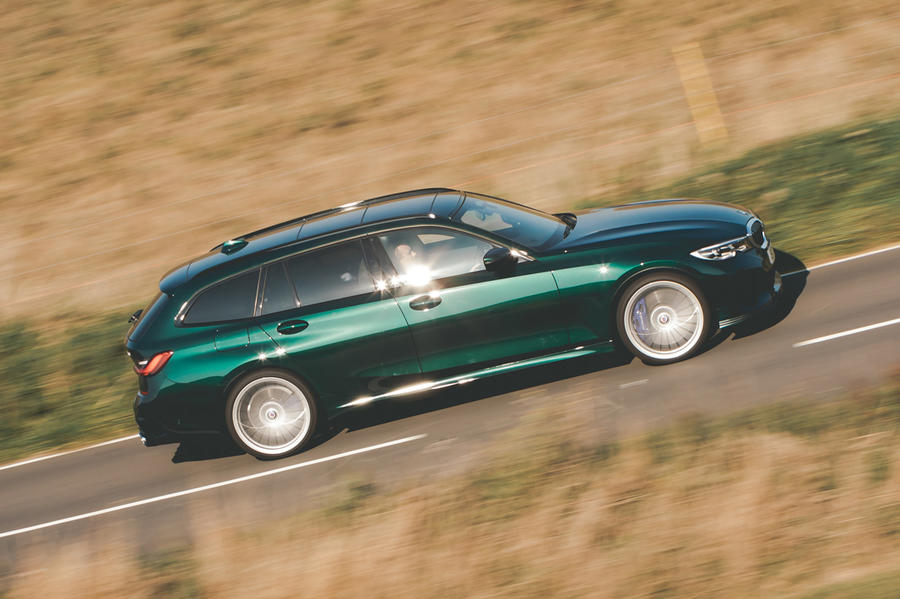 But the Merc can be had for a good bit off list this not. Its a 70k 3 but will have low depreciation. Actually makes 340i deals look a bargain.

If I had the spare cash, I'd have one.

I do like that Alpina green. Not a million miles away from British Racing Green and suites the estate body shape somehow.

If I had the spare cash, I'd have one.

If granny had balls she would be granddad.

Sell one of your McLaren's, anyway McLaren ownership disappoints you with each and every car.

Well there's the price I suppose and the running costs, but I can't think of a better car to buy and keep for ever, as ICE engines are slowly phased out.