BACK TO ALL NEWS
Currently reading: First drive: 2020 BMW M3 prototype
UP NEXT
Tesla to expand select UK Superchargers to other electric vehicles

Munich's favourite performance export is fast approaching a new generation. We get behind the wheel of a test mule to see how it's shaping up
Open gallery
Close

Despite the broad disruption to its operations brought by the Covid-19 pandemic, BMW’s M division continues to hold firm to plans to reveal both the all-new BMW M3 and BMW M4 this September, prior to BMW's start of production and sales by the end of the year.

Before it gets that far, though, there’s a final phase of development testing to be completed and a validation sign-off by the German car maker’s board later in the summer, ahead of which we've been invited to drive them both in prototype form.

Wearing heavy camouflage, the high-mileage M3 and M4 development hacks that BMW M has brought to the Sachsenring have clearly had a hard life. We’re assured they represent the latest technical standing of the car, though. Ignore the heavy cladding and plastic wrap in our pictures and you’ll be able to make out certain styling elements, including the deep new kidney grille and the widened wing panels front and rear necessitated by the adoption of wider tracks and some rather serious-looking wheel and tyres.

Sat in the pit lane, both cars have a squat, hunkered-down stance that instantly marks them out as something a bit special. They’re quite a bit larger than the outgoing fifth-generation 2015-2020 BMW M3 and first-generation 2014-2020 BMW M4, too. Each takes on its own distinctive form: the 2021-model-year M3 appears significantly more upright next to its lower M4 sibling.

The rear-wheel-drive saloon and coupé models here represent only half of the planned bodystyles for BMW’s mid-level M-car line-up. As before, there’ll be an M4 cabriolet by the middle of next year and, for the first time, a new M4 Gran Coupé introduced around the same time. In a continuation of familiar BMW M derivative strategy, standard and Competition versions of both the M3 and M4 are planned. The promised upping of performance comes after the introduction of the four-wheel-drive BMW M340i xDrive and BMW M440i xDrive, which plug the gap to the rest of the BMW 3 Series and BMW 4 Series line-up. 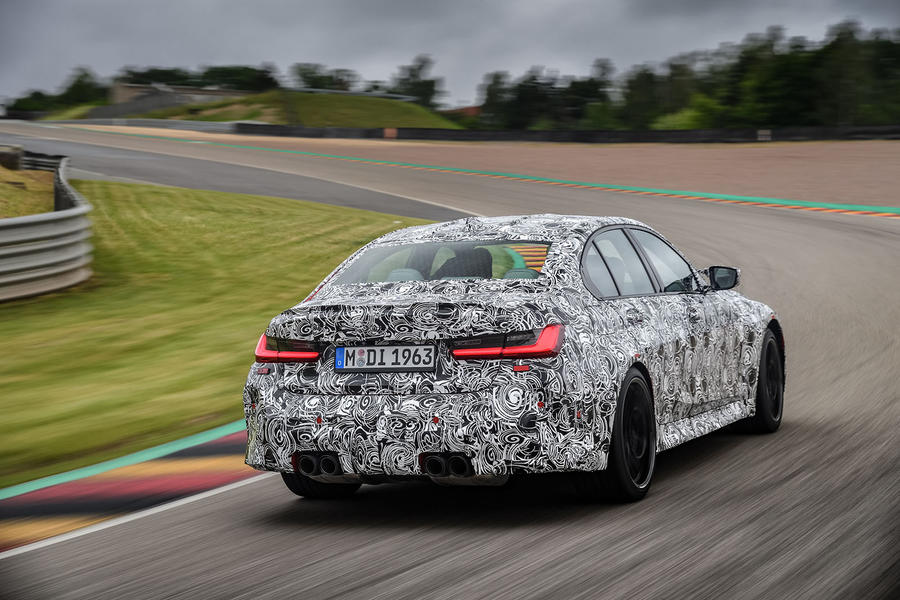 At the heart of each new model is the M division’s new S58 engine. The twin-turbocharged 3.0-litre in-line six-cylinder successor to the long-running S55 unit delivers 473bhp and 443lb ft in the standard M3 and M4 – 29bhp and 37lb ft increases over the outputs of the outgoing models.

From the start of UK deliveries, the standard rear-wheel-drive models will come with the choice of either a standard six-speed manual or optional eight-speed torque-converter automatic gearbox in combination with BMW M’s electronically controlled M Sport locking rear differential. In the new M3 and M4 Competition, the output is increased by a further 30bhp to a headlining 503bhp through what BMW M describes as “some specific software changes”, while torque remains at 443lb ft. That’ll make the flagship versions of the M3 and M4 a match for any of their direct rivals on peak power.

Unlike the standard models, though, the M3 Competition and M4 Competition will be sold exclusively with an eight-speed torque-converter automatic gearbox and, in a big break from tradition, they will also be offered with the option of BMW M’s fully variable xDrive four-wheel drive system shortly after the start of UK sales. It’ll be the first time either the M3 or M4 has been sold with anything but traditional rear-wheel drive.

It’s reassuring to hear BMW M’s latest in-line six-cylinder and discover it possesses a more evocative exhaust note than the engine it replaces as we hit the starter button on the centre console and set the M3 prototype into ‘M1’ (the first of two preset driving modes accessed by buttons on its new multi-function steering wheel) for our first drive of the new model. It’s less raspy in character, with a deeper, more guttural tone.

We amble down past the pit garages in first gear and head out onto the circuit. First impressions? The new M3’s S58 engine is quite a bit sharper than the old S55 unit. Not only does it sound great, with a soaring combination of hard mechanical thrashing and exhaust as revs rise, but it also punches with real purpose in lower gears. 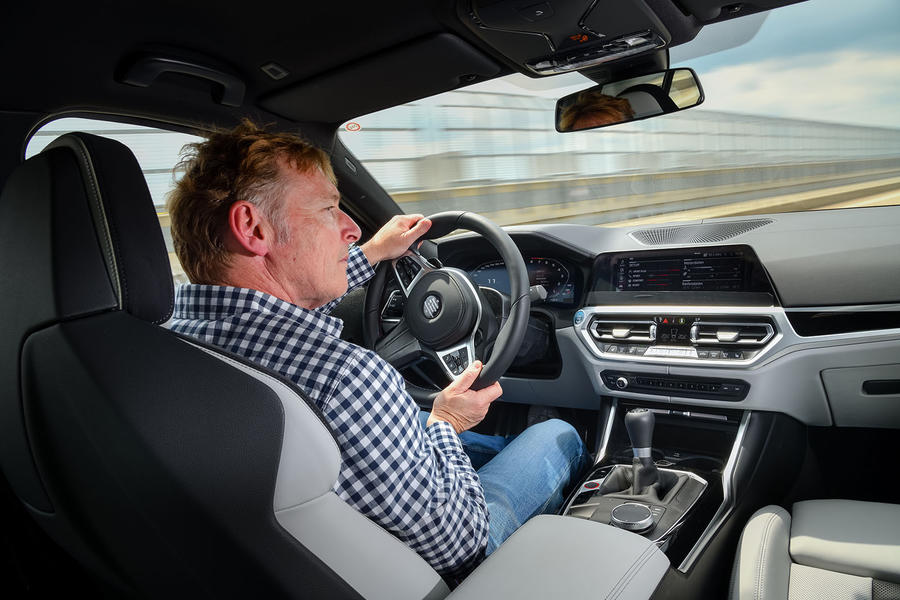 With added torque concentrated across a wider rev range and a useful lift in power at the top end, there’s both more urgency and even greater linearity to the delivery than the last M3 offered (which was already a particularly even-revving performance engine). The change in character is subtle but noticeable. The throttle response is improved, too. It’s not exactly rabid but offers greater sensitivity to inputs for more precise metering of reserves.

Less well resolved is the manual gearshift. It’s quite long in throw and rubbery in feel. Traditionalists will argue, but the truth is that the traditional six-speed manual is a long way from matching the speed and precision and you’d expect from a gearbox on a car bearing the BMW M badge.

That’s a pity, because the rest of the driveline feels wonderfully engineered and full of focus. Although we’re yet to see any performance claims, you can expect a 0-62mph time under 4.0sec and, in combination with the traditional optional Driver’s Package, a top speed approaching 174mph for the standard rear-wheel-drive model.

But while the engine impresses, it’s the chassis that really moves the M3's game along. It’s described as being all new and largely bespoke, with only the pick-up points for the suspension, which will come as standard with adaptive damping, being shared with the standard 3 Series. In a now familiar move, BMW M has developed a new engine strut brace that serves to stiffen the entire front-end structure quite significantly. That provides the basis for even greater fluidity and handling poise than with the standard 3 Series and prototype versions of the 4 Series we've driven recently.

At the same time, it has provided the new M3 with a much wider front track than at any time in the past. As it did on the BMW M3 CS, BMW M has also fitted staggered forged aluminium wheels front and rear - 19in up front and 20in at the rear as standard - in the search of added steering response. They wear 275/35 and 285/30 Michelin Pilot Super Sport tyres, making for more rubber on the road than any M3 or M4 has had before.

In a development first unveiled on the BMW M8 and recently brought to the facelifted BMW M5, the new M3 and M4 receive a function that provides access to the individual driving mode options for the engine, suspension, steering and brakes via the iDrive controller. On four-wheel-drive xDrive models, it will also allow you to alter the apportioning of drive to give you pure rear-wheel-drive qualities on a track when desired. 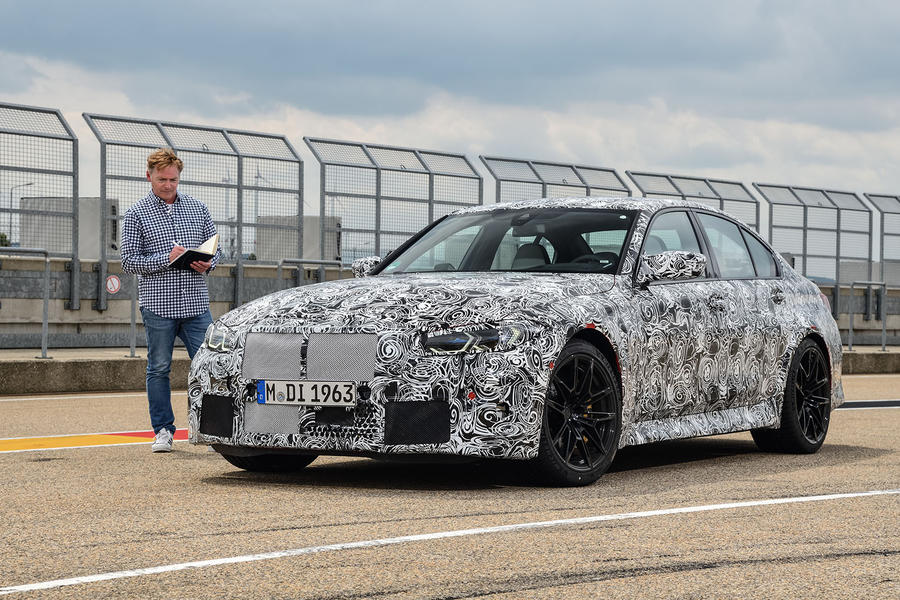 The steering of our rear-driven M3 prototype is excellent - precise in action and weighted to perfection for the more demanding sections of the Sachsenring circuit. Having run a number of laps in its predecessor to form a benchmark earlier on, we can confidently say the new M3 offers greater driver involvement than the car it replaces, even in its most basic form. True, the new model lacks the compactness that once marked out the M3 among its four-door performance car rivals but it’s extraordinarily agile for its dimensions, changing direction incisively and with a very direct feel to the way it turns in to corners.

There’s added grip as well. The wider front tyres deliver great adhesion, allowing the new model to carry high speed up to the apex and beyond with impressive neutrality and superb body control despite a quite heady weight transfer. There’s a generous amount of wheel travel given the performance car billing, but it feels magnificently settled and well within its limits when hustled hard through the Sachsenring’s Castro Omega curve - a tricky off-camber downhill constant radius right-hander that exits uphill into the equally challenging Sternquell curve.

Push the chassis hard and the car’s M Sport differential does its usual neat trick, apportioning drive to each individual rear wheel in search of optimum traction. All of which allows you to exploit the inherent balance and assuredly work up to and, with the DSC turned off, beyond the limits. And because of its added muscle and improved response, the M3’s new engine can be relied upon to alter your cornering line on the throttle.

It’s always tricky attempting to form an accurate impression of a new car from a handful of miles on a smooth-surfaced circuit. In this case, though, we’re confident BMW M has succeeded in injecting its highly revered performance saloon with an added dose of performance and handling prowess. There’s still a lot to learn about it, but in back-to-back runs with the old model, it felt not only a good deal faster in a straight line but also a more accommodating car to drive at or near its limits thanks to a new-found sense of handling delicacy.

We’ll know for sure when we get to test a production version on the road later this year, but you might just be looking at the most dynamically accomplished M3 yet – one that’s bigger and heavier than ever but, on the strength of this first encounter at least, also inherently more exciting to drive. 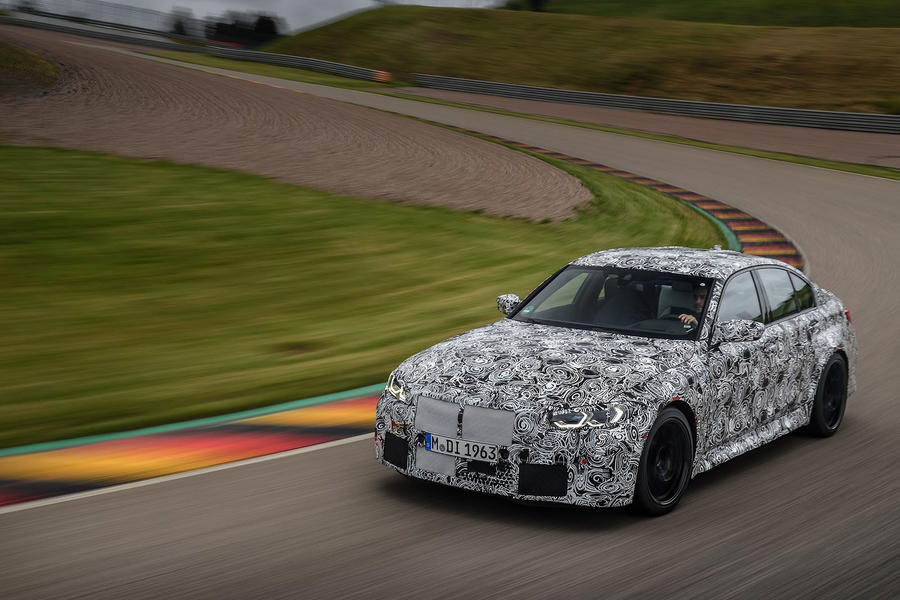 The manual version appears to be more powerful than we were initially led to believe.  Would be great if they could improve the gearshift before launch time and the M2 Competition suggests they can still deliver this when required...

Well, the reads well, may not be the best, but, judging by this article, there isn't much wrong with it.