A cut above your average used coupé-convertible in looks and quality, the Eos even has a sunroof within its folding hard-top
Share
Open gallery
Close
Share story

The Volkswagen Eos is a member of that select group of hatchback-derived coupé-cabriolets that graced the noughties and included the Ford Focus, Vauxhall Astra, Peugeot 308 and Renault Mégane. Of them all, though, the Eos was the poshest, a status reflected in its higher price. 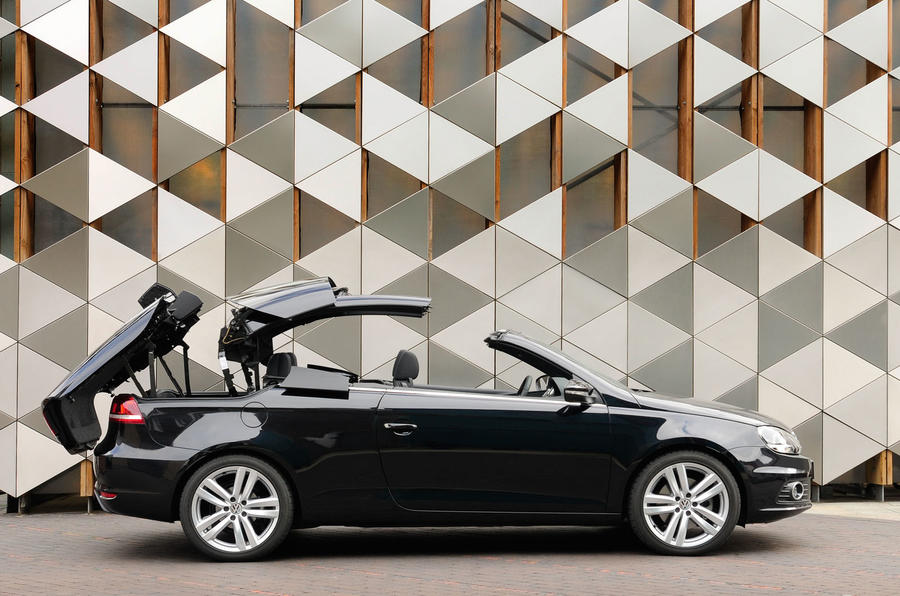 The Eos was launched in 2006 and lauded for its spacious 2+2 cabin, roomy boot (at least until the folded roof occupied most of it) and good handling. However, the highest praise was reserved for its stiff bodyshell and a metal folding roof that incorporates a sliding sunroof.

Note the emphasis on petrol engines there. The lone diesel was a 138bhp 2.0 TDI. The thing is, if you want a good selection of petrols to choose from, a pre-facelift Eos is where to look because the diesel didn’t really catch on. 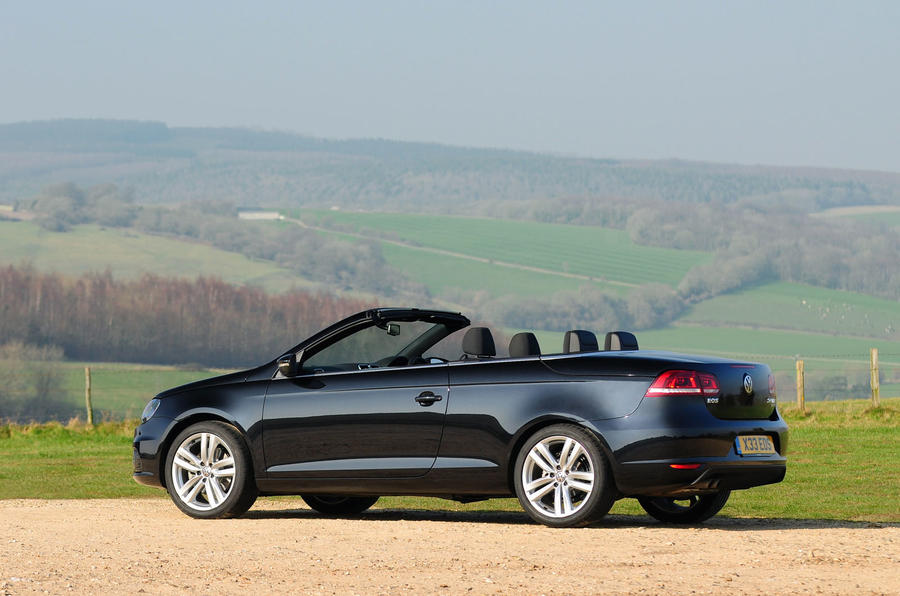 With the facelift, the Eos also acquired a simpler but smarter grille and a restyled bonnet and wings. At the back, the comical round tail-lights were given the heave-ho in favour of slimmer, more toned-down affairs. Versions with leather trim gained a new finish capable of reflecting the sun’s rays.

The popularity of the diesel version after 2011 is a clue to the model’s appeal to business users, so check the one you’re looking at hasn’t been flogged and neglected. In any case, it’s an EU5 engine so subject to creeping emissions penalties and tougher MOT tests. 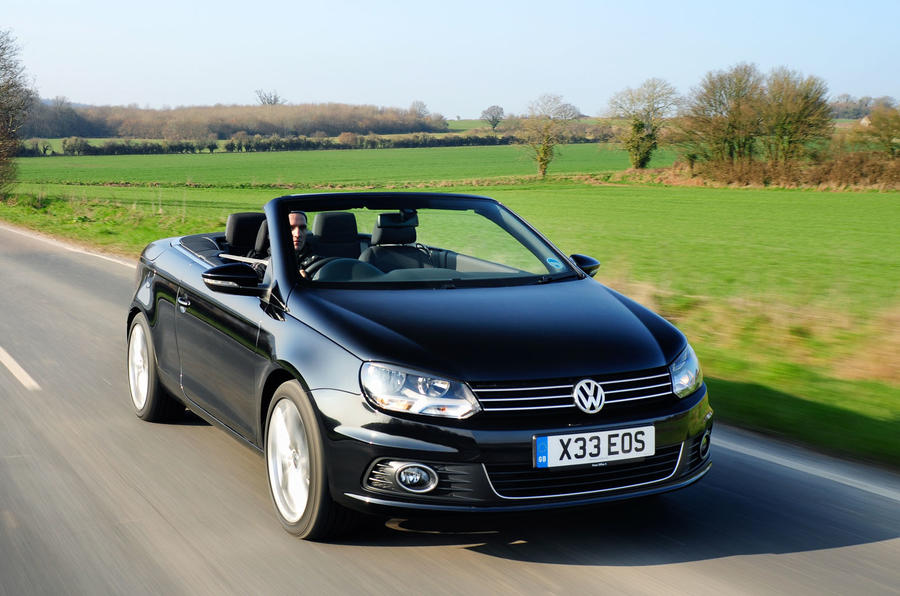 Really, you want to find one of the petrol models, but avoid the earlier 1.6 FSI. And if you must have the DSG auto, ensure you opt for the facelift model, when the ’box was improved. (Earlier ones must have their oil changed every 40,000 miles or else.)

Apologies for what follows… but find a good one and an Eos, the Greek goddess of dawn, could be the dawn of a new era in your motoring.

Phil Harding, VW Service Centre (Gosport): “There are a few issues with the Eos, mostly concerning the roof and making sure the drain holes are clear. Neglect them and in a rain storm the car can quickly resemble a goldfish bowl. Otherwise, the roof is really special. It’s made of steel and glass and even incorporates a sunroof so that it still feels light and airy when the main roof is closed. One thing: check if the engine is belt or chain driven. VW had issues with tensioners failing, causing the chain to jump and destroy the engine. At least a belt has specified replacement intervals.” 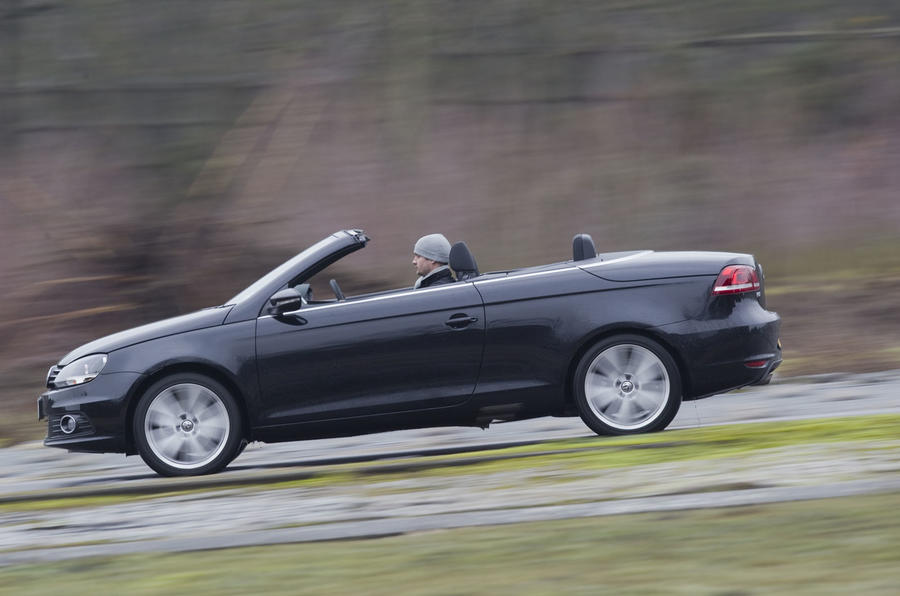 ■ Engines: Listen for rough running, which could be air leaks in the breather hoses and/ or carbon deposits fouling the fuel injectors and forming on the backs of inlet valves and diverter flaps. Check the oil level as TSI petrols can drink it. 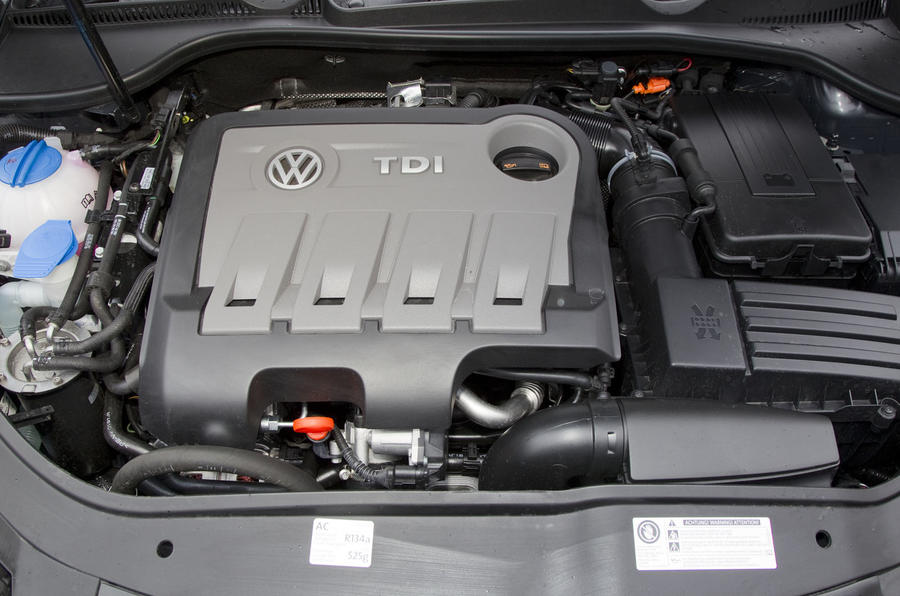 ■ Suspension and brakes: The Eos is a heavy car so check the condition of brake discs and pads. On the test drive, feel for a hard pedal and reduced braking effort, suggesting the brake servo pipes are leaking. Springs and suspension bushes can take a pounding, too. Insist the car has a new MOT, proof that at least what play there is in the suspension system is acceptable. 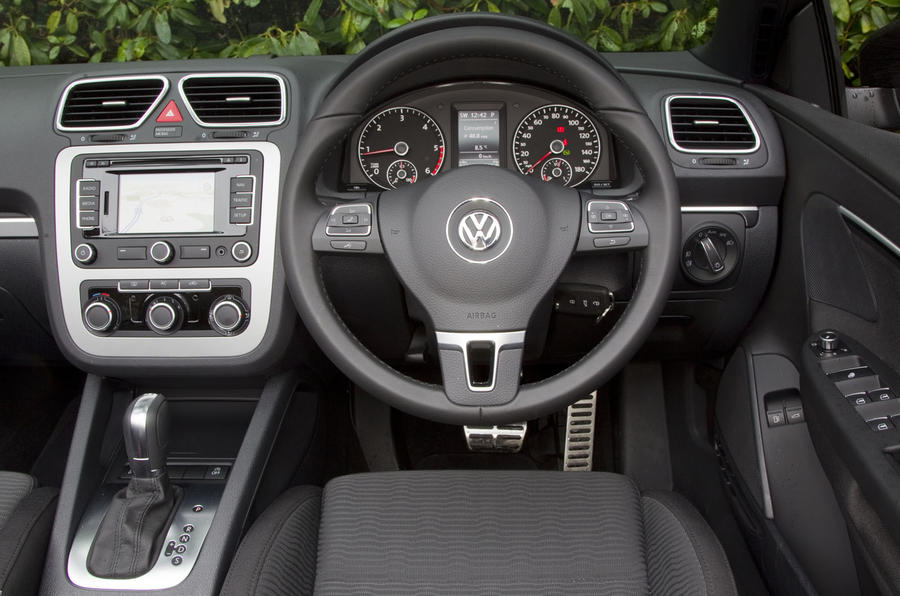 ■ Interior and boot: A freshly valeted and scented Eos may be disguising previously damp carpets and a musty smell. If possible, check it when it has dried out. Water can get under the carpets and damage the roof’s control unit. Make sure the boot is dry since water can get in here, too, and corrode the roof pump.

Cayman Autos, a specialist in convertible roof repairs, claims it sees Eos cars with troublesome roofs quite often. Common issues are dry or perished seals, water ingress via the boot and the small roof winglet fouling the headlining and sticking. If necessary, which it rarely is, a replacement roof can cost up to £9000. 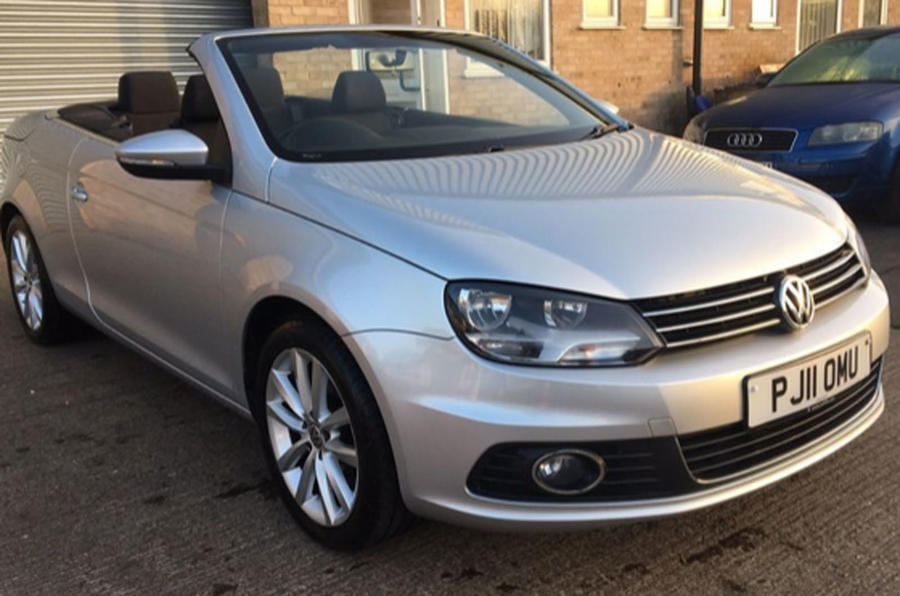 Soft tops in general are fast disappearing, no SAABS, Ford, Vauxhall, Renault, Pugs etc it seems they're all pulling out.

Anyway back to the car and VW's in general. AVOID the turbo'd and supercharged engine, you're never be able to put the oil in quick enough

Yet again Autocars used car guru is pushing cars fitted with an engine to make the Stags V8 look good, avoid the turbo and supercharged 1.4. Avoid the DSG, oh, and they are know for leaking, so unless you are going to keep it in a garage dont do it.

Use to work for a vw

10 June 2019
Use to work for a vw dealership can tell you there is a very good reason why so you don't see any Eos left on the road and why so many got scrapped early, the seals around the metal roof had a life span of about 3 years so just outside warranty they started leaking, unfortunately for Volkswagen most started leaking after only 2 years soaking the footwells the electrics were a nightmare on these cars very common to see the entire interior out on multiple occasions. They were rubbish and no surprise vw never replaced it.

Use to work for a vw dealership can tell you there is a very good reason why so you don't see any Eos left on the road and why so many got scrapped early, the seals around the metal roof had a life span of about 3 years so just outside warranty they started leaking, unfortunately for Volkswagen most started leaking after only 2 years soaking the footwells the electrics were a nightmare on these cars very common to see the entire interior out on multiple occasions. They were rubbish and no surprise vw never replaced it.

they are know for leaking, so unless you are going to keep it in a garage dont do it.

On ANY folding hardtop convertible the seals can leak if they are not looked after - they need to be regularly lubricated with a silicone gel, or something similar (containing silicone), do this and they shouldnt leak. I suspect most of the seals thrown away after 3 years would have been perfectly good if theyd been lubricated in this way, of course, stealerships know f all (and should be avoided at all costs (whatever manufacturer), so this basica piece of knowledge would be beyond them.

10 June 2019
So apart from roof,engine , gearbox , electrical and suspension issue, it looks a solid buy !

Why are they promoting this

The roof leaks and is expensive to repair
The 2.0tsi burns oil and cokes up
The 2.0tdi is probably part of the emissions recall and if it’s been rectified will run awful
The 1.4 twin charger was badly engineered and fails..