Surely you would have to be mad to buy a British luxury car built in the 1980s? Not completely
Open gallery
Close

We don’t often quote artists at Autocar, but “have no fear of perfection – you’ll never reach it”, the oft-paraphrased words of Salvador Dalí, seems as good a motto as any for owners of the Jaguar XJ40, an iconic British saloon whose problematic predisposition is central to its charm.

That’s not to say every XJ of this generation listed in the classifieds is a basket case: at the time of writing, you could buy a mint-condition 1989 car for £8000 or a very promising one-owner 1992 example for £10,995. But these are collectors’ cars, kept in garages and driven only on sunny days. If your used Jag budget is south of the £5000 mark, you’re looking at slightly less prestigious examples and would do well to exercise caution.

A big part of the XJ’s appeal is its range of engines: Jaguar offered a straight six from launch in 2.9-litre (XJ6) and 3.6-litre (Sovereign) forms. These were bored out to 3.2 litres and 4.0 litres respectively later on, with the coveted XJ12 6.0-litre V12 option joining the range in 1993, just a year before XJ40 production ended.

The largest six-cylinder unit is the most common these days and well regarded for its ability to get down the road. Certainly, its outputs of 246bhp and 289lb ft hold up well even today, being able to push the saloon from 0-62mph in 9.0sec and on to a top speed of 136mph.

The later XJ12 and Daimler Double Six models have twice the amount of cylinders to fill and thus are much costlier to run, but they run at such a lazy state of tune and are often driven carefully, so they could be the unexpected safe options here. 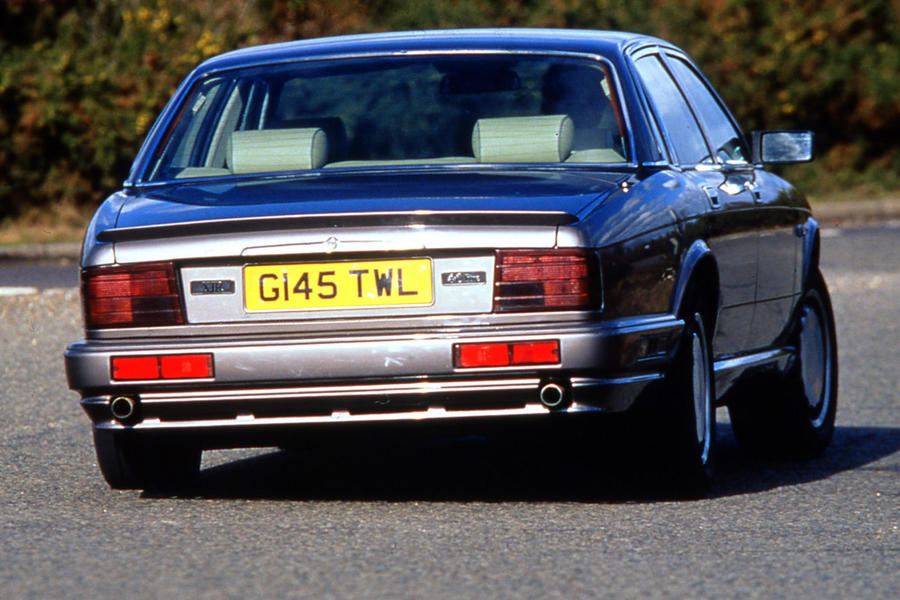 The rarer XJR – tuned by TWR, Jaguar’s then racing partner – is about as close as the XJ40 came to performance territory, packing hardcore suspension components and a tuned version of the larger straight six beneath its bodykit.

Each model rides well and is a good deal quieter and more refined than the XJ40’s long-lived predecessor, the XJ Series III. Don’t expect much in the way of engaging dynamics, because this isn’t a car revered for its poise or agility, but it’s no boat either.

Mechanicals across the range are more solid than you might expect of a 1980s British car (save for some well-known niggles with the 2.9-litre engine), so why has the XJ40 yet to achieve bona fide classic status? Its bodywork is one factor: quite apart from the fact that even some of the most ardent enthusiasts consider this to be one of Jaguar’s more tepid designs, it’s also prone to corrosion. Wings, arches, bootlids and, more seriously, the bulkhead are the most fragile areas, and because the XJ40 remains relatively low in value, they can still send an otherwise clean car to the scrapheap when they crumble.

So do your bit for this disappearing British icon. The suave XJ-S coupé is well on its way to unattainability and daily-driven Mark 2s have long been a thing of the past. The XJ40, on the other hand, is a real down-to-earth wafter, and you can still bag a good example if you know where to look. 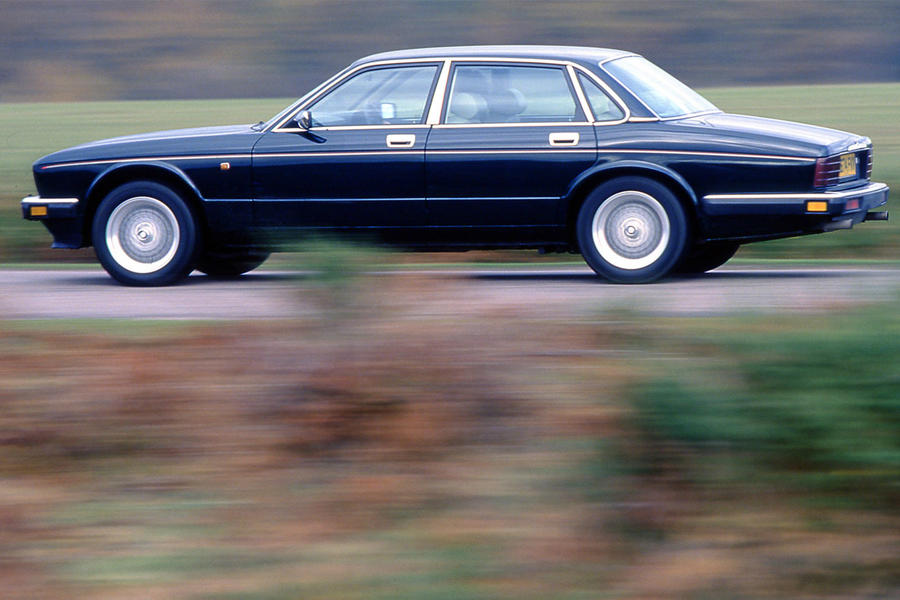 Sebastien Turin: “The 2.9 is a mix between Jaguar’s AJ6 and V12 engines with some XK parts. It’s prone to head gasket failure, and the head can be badly damaged. Because the engine is a bit weak, people use them too harshly. The 3.6 is more revvy and has a sportier feeling, but it has no oxygen sensor, so some people would consider it less reliable, because it can’t compensate for something like a small air leak.”

■ Engine: The mammoth V12 is durable, but its MPG figures will be in the single digits around town. The straight sixes like to eat head gaskets, so check for creamy oil and white smoke from the exhaust. Timing chain tensioner failure is one to avoid – best to replace as a precaution. Many enthusiasts dismiss the smaller six-pots on the grounds of lacklustre performance and poor frugality.

■ Bodywork: Structural components age well, but bodywork is susceptible to tin worm, particularly on pre-1989 cars. The bootlid is usually the first to go, but this can be replaced. Of greater concern, and usually fatal, are crumbling inner wings, bulkhead and sills. Also examine the front end, where the subframe can rust if drains haven’t been drilled. If you find a solid car, coat its underside with Waxoyl and clean it regularly.

■ Suspension: The XJ40’s self-levelling suspension is similar to Citroën’s trademark hydropneumatic system but arguably more fragile. Many owners simply remove it when the rear starts to sag and bounce. It was standard until 1990 and an option thereafter. Check the state of play and consider budgeting for conventional shock absorbers.

■ Electrics: Post-1990 cars suffer from headlight bulb sensor failure, causing a warning light on the dashboard even if the bulb is working. Trip computer and gauge glitches are common, too, as are air-con and central locking system faults. So spend a few minutes making sure that everything works as intended. 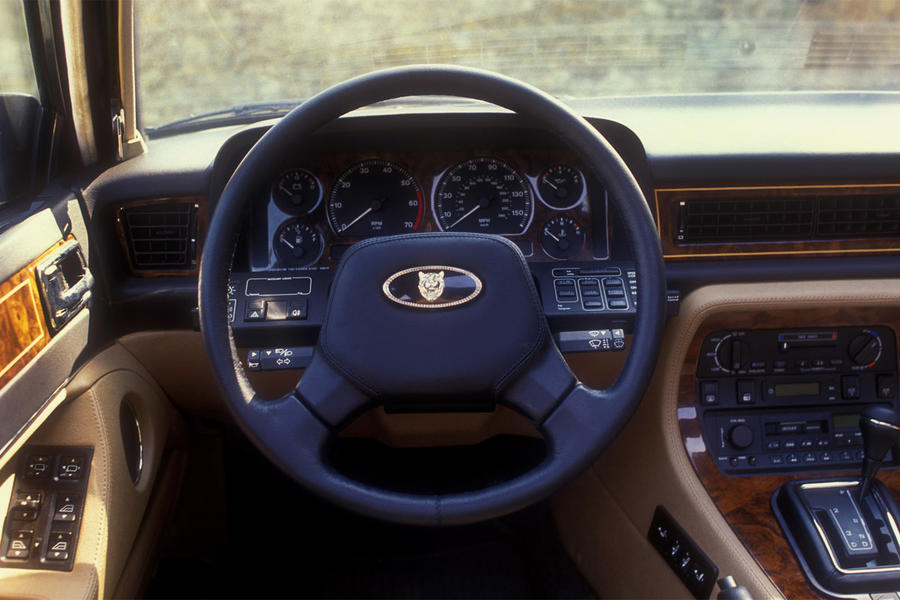 ■ Interior: Water ingress is common, so check the front footwells for damp. Sources include holes in the bulkhead, blocked air-con drains and the ‘duck bill’ hose beneath the wiper motor. Damp boot floors are also common; water enters via the fuel filler cap surround, antenna grommet and just above the bumper.

Many perceive post-1992 cars to be better-built, as a result of Jaguar being bought by Ford, but it’s still early cars that command big bucks. If you’re not too fussed about classic credentials, authenticity or provenance, a run-out XJ40 is potentially the cheapest and safest route into old Jag ownership.

£500-£1999: Restoration projects in need of a complete strip-down and rebuild.

£4000-£6999: Early cars, either garage-kept or fresh from recent recommissioning work.

£7000 and above: Low-mileage collectors’ models, some desirable V12s and rare XJRs. 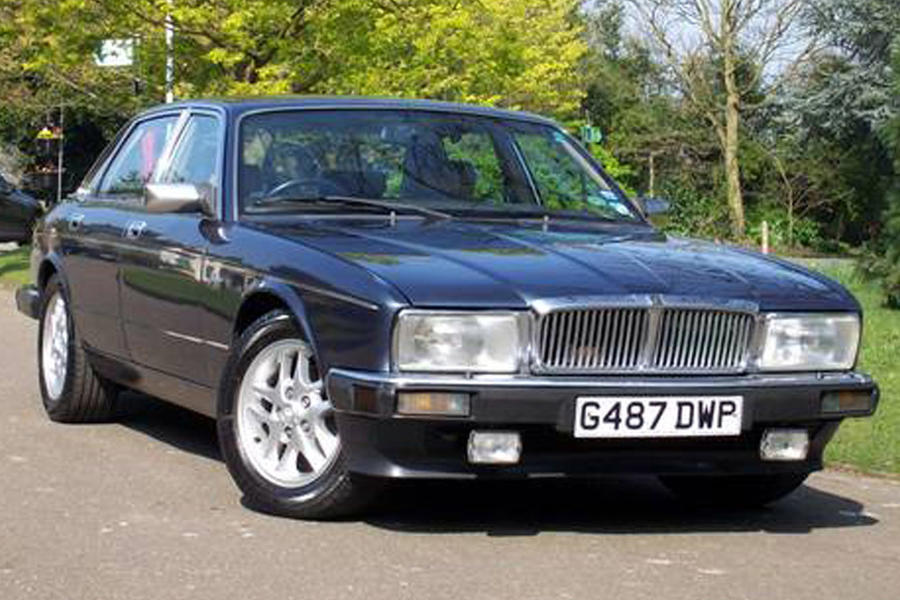 Jaguar XJ 4.0 Sovereign, 1989/G-reg, 151k miles, £2795: The seller’s admission that this car is “not perfect by any means” explains its low price but suggests you needn’t be scared to park it at the supermarket or drive it in the rain. It has done a fair few miles, but there’s a reassuringly comprehensive stack of history and receipts, so we’d be happy to overlook the small rust spots and dud air-con.

As per the previous comments, there are a number of errors in this feature. Research and speaking to owners groups and forums would have made a much better, more accurate article.

Yes, as with all cars that are approaching their 35th birthday (in some cases), there will always be certain faults that become part of the 'known issues'. For example, bulkhead rot only affects 93-94 cars due to the battery being relocated to the boot. Rust points in particular areas, front wings and the bottom of A pillars on models with asunroof fitted. This is caused by the sunroof drains not being routinely cleaned.

Yes, rust is the biggest problem. However, XJ40s will follow a pattern and this can be checked by a buyer who has done their homework.

There are excellent owners groups who will always offer advice and support to prospective buyers to help them avoid the few lemons that still exist.

That said, we are approaching the tipping point where the ones that are offered for sale are enthusiast owned examples that have had the issues properly repaired. The days of the sub £1000 cars are nearly done, as these cars have been stripped for parts and banger raced.

Who am I to comment? I've owned my 1992 XJ40 Sovereign for almost 5 years. It has been the best classic I have owned and has been used in all weathers during my ownership. I did my research and found the right one.

Done correctly, anyone can have a great ownership experience.

Fairly misleading article in a lot of ways, with incorrect statements and wrong facts.

Firstly the XJ6 and Sovereign were both available with 2.9 or 3.6, not one for each model.

With the exception of the 2.9 the AJ6 does not like to 'eat head gaskets', nor do they typically suffer from tensioner failure (Early 3.2 AJ16s and AJV8s suffer from the latter)

Early TWRs do not have tuned engines - only the late 4.0 TWRs and JaguarSport XJRs have engine modification.

Earlier cars do not typically suffer from bulkhead rot - this is more or less limited to facelift 93-94 cars.

As for the bit about it not being engaging or dynamic - rubbish.
The 40 was praised for its handling and as an owner myself, I can quite happily ita both of those things. After doing 12,000 miles (completely trouble free might I add) I should know.

I'd also argue they have reached classic status, as values have climbed hugely since I purchased mine in 2016.

The V12 will easily achieve double digits round town, and around 23 on a run if driven sensibly, but, it's a costly engine to maintain, so suggesting that could be the 'safer' option over the notoriously bulletproof AJ6 is just madness.

One of the best models to go for is actually the early, pre facelift 4.0 non cat. Best compromise.

Lots of comments from people here that have been listening to too many stories down the pub from people who have likely never driven one.

It's the most reliable car I've ever owned and is an absolute gem of a car.

Oh, and as for the 'heres one we found' - that car has been for sale for over 2 years. It hasn't sold for a reason. Why would you ignore the fact the aircon isn't working when it's expensive to repair and right after you've explained the horrors of buying one with rust? Contradictory advice!

Not sensing much love for the XJ40 here. I still have the copy of CAR magazine which had the first road test. The glowing praise it received almost makes it feel like a paid promotion in retrospect. Remember being distinctly underwhelmed by the styling. If I was going down the cheap luxury barge route would favour an LS400.

Not sensing much love for the XJ40 here. I still have the copy of CAR magazine which had the first road test. The glowing praise it received almost makes it feel like a paid promotion in retrospect. Remember being distinctly underwhelmed by the styling. If I was going down the cheap luxury barge route would favour an LS400.