BACK TO ALL NEWS
Currently reading: Used car buying guide: Ferrari Mondial
UP NEXT
Analysis: How UK grid will cope with an EV revolution by 2030

It may only be as fast as a modern Ford Fiesta ST, but the Mondial is an eye-catching four-seat sports coupé with a turbo-free V8
Share
Open gallery
Close
Share story

Let’s get one somewhat uncomfortable truth out of the way immediately: a new Ford Fiesta ST or 2.0-litre Mazda MX-5 will keep pace with a Ferrari Mondial on a sprint to 62mph and a new Porsche Cayenne Turbo S E-Hybrid – weighing nearly a tonne more – will eat it for breakfast.

Indeed, even the most potent form of the Mondial offers just 296bhp, and its most common and accessible variant brought a piddling 215bhp to the table. It’s not an unhinged homologation special like the same-aged 288 GTO, then, nor an outlandish, tough-to-tame analogue spaceship like the Testarossa.

In fact, although its name sounds suitably exotic when pronounced in its native accent, the Mondial was christened in reference to its compliance with global safety and emissions standards – hardly ammo for a successful pub brag.

Gosh, we’re not exactly selling it, are we? But if you cast your eye rearwards, you will note the presence of a pair of extra seats, which give it an edge over most comparable classics in terms of usability, and you should be able to pick up a nice example for a touch under £30,000, so it’s a good deal more obtainable.

And remember, that engine is a Maranello-engineered, naturally aspirated V8 with a flat-plane crank. Thus it sounds just about fruity enough to convince the ill-educated that it’s a full-bore performance weapon, especially when breathing through a Tubi or Larini performance exhaust (seriously, look on YouTube), even if the relatively staid styling rather quashes the illusion. 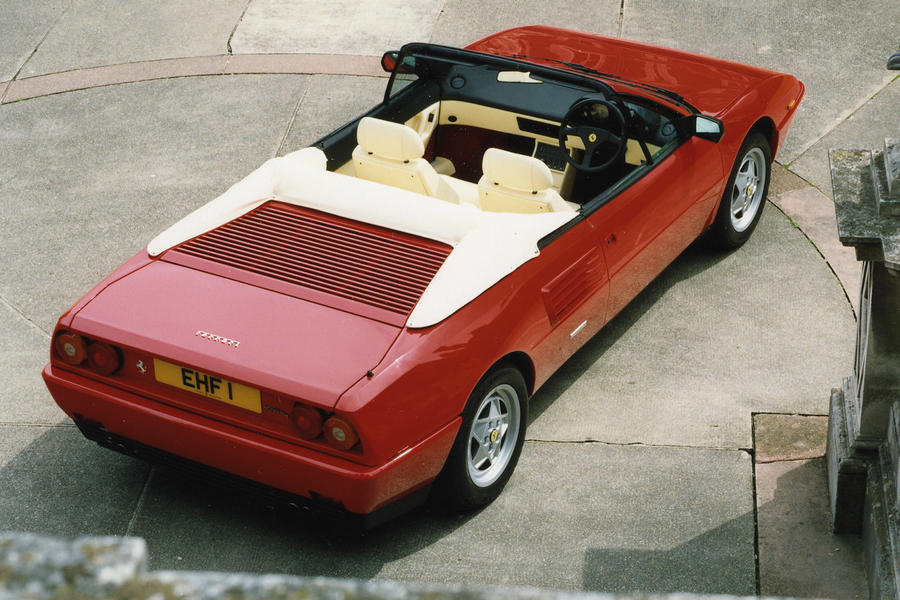 You won’t be disappointed by the handling, either; with fresh suspension bushes and ball joints, that chassis comes alive on the right road, with the rear-mid-engined layout giving a decent centre of gravity and optimised weight distribution.

This quad-saddled prancing horse hit the market in 1980 as the Mondial 8, and while these early 3.0-litre cars are easy to find and cheap to buy, you get better performance with the Quattrovalvole (named for its four valves per cylinder) that arrived in 1982 and better still from the upsized 3.2-litre lump that came in 1985.

La crema del raccolto is the Mondial T, which took the model through from 1989 to its retirement in 1993. This final incarnation upped the performance stakes by boosting engine capacity to 3.4 litres for a much more respectable 0-60mph time of 5.6sec, according to our 1992 road test.

There was also a convertible option from 1983 onwards, but the soft top’s storage bay ate into the rear seats, so don’t expect to take the whole family out for a top-down blast.

Part of the reason enthusiasts never warmed to the Mondial was mostly due to its lukewarm performance but also because its strong sales (more than 6000) diluted Ferrari’s specialist brand cachet.

As far as we’re concerned, though, there’s absolutely nothing wrong with democratising sports cars. And in a world where a 250 GTO can fetch £52 million, we welcome a cheap route into Ferrari ownership. 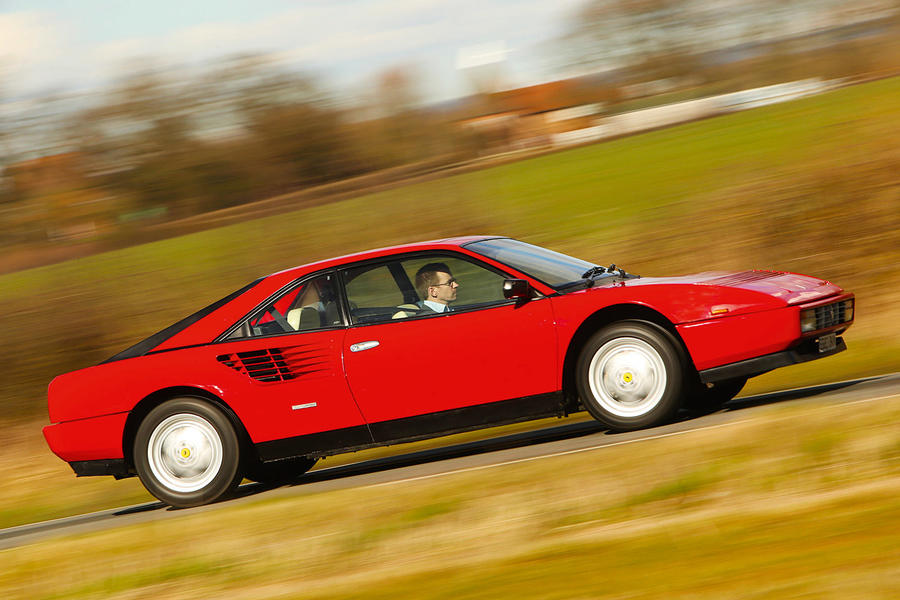 Allan Carli: “My Mondial has been great to own. It still drives well and I still enjoy it every time I take it out. It handles great with the right tyres but can also be taken on long journeys. The seats can get a little hard and uncomfortable on long trips and the QV lacks power steering, but you notice it only on slow, tight turns and while parking. I run slightly smaller front tyres and higher air pressure to overcome the heavy steering.”

■ Bodywork: The gas struts on the front hood and engine cover weaken over time, but new ones cost less than £50 per pair. Be more worried if there are signs of rust about the arches, battery tray and door bottoms, because panels (if you can find them) and labour can quickly up your outlay. The low front splitter will often be scarred. It’s a good idea to get any prospective purchase up on a ramp for a comprehensive inspection.

■ Engine: The separate, removable subframe improves ease of servicing on pre-T models, but the run-out car adopted a T-shape layout for the engine and gearbox, which makes access for jobs like belt replacement a bit of a pain. Be wary of cars with patchy service history and ask for proof of all recent oil and belt changes. If there’s excessive smoke on start-up, you could be looking at a pricey engine rebuild.

■ Interior: Try the back bench before writing it off as impractical; you should find the front seats are narrow enough for you to comfortably put a leg either side. The good-quality Connolly leather tends to age well, but the Mondial’s impressive long-distance capabilities mean some wear is to be expected. 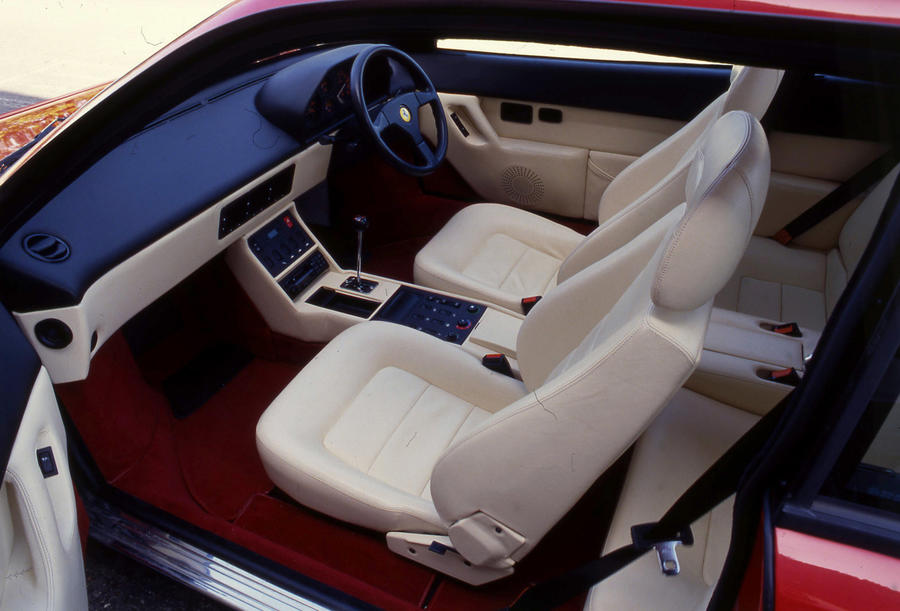 ■ Electrics: The windows were slow, but really tedious times will usually be caused by gunked-up runners or dirty switch internals. The battery will die if the car is unused for an extended period, so keep it on a trickle charger. Consider fitting a modern fuse box, because the original one is prone to burning out.

■ Chassis: Early cars had metric wheels, for which tyres are extremely difficult to find. Swapping them for a set of later 16in or 17in items will make replacement a lot easier. The Mondial T got electrically adjustable suspension with a choice of three driving modes; if a warning light is showing, check that the adjusters turn freely and the actuators are clean and firmly pushed into the shocks.

Early Mondials shared many parts with their 308 predecessor and later cars formed the basis for the 328, so most mechanical, electrical and interior components are easy to track down if you widen your search criteria. Don’t shy away from breakers’ yards, either: a scuffed original part is often far superior to a shiny new reproduction. 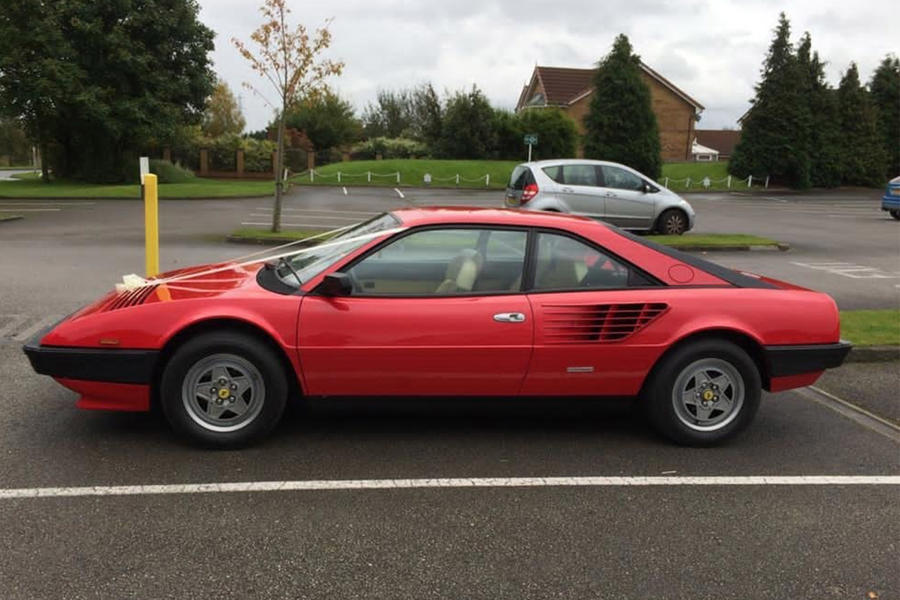 Ferrari Mondial QV, 1984/B-reg, 39K miles, £29,995: Fork out for a later, more powerful Mondial if you can, but we wouldn’t be disappointed with the 32-valve 3.0-litre engine’s performance at this price. This car has only 1000 miles on its current timing belt and, for better or worse, has never had any welding work done. It has stacks of history, too.

Ferrari 812 GTO due this year as likely V12 GT swansong

You have really got to love a Ferrari or any car of this vintage,and, as said, you'll need deep pockets ti fund this Sunday morning eye opener.

Sundym 15 February 2021
Elephant in the room moment! The article did not mention one key point. Its ugly and ungainly which is why no one has ever wanted them and why 308s from the same era are 3x the price .
Bimfan 15 February 2021

Buy in haste, repent at leisure. Services every few thousand miles, insurance and repair costs including Italian elecrics, are only some of the issues.

Any Ferrari, even a Mondial or Dino will attract unwelcome, as well as welcome attention.