BACK TO ALL NEWS
Currently reading: Used buying guide: Seat Leon Cupra
UP NEXT
EV start-up Aehra to launch “ultra-premium” SUV and saloons

If you’re tempted by a Golf GTI, its Spanish relation, the Leon Cupra, is cheaper, rarer, more eye-catching and, best of all, hotter
Open gallery
Close

Inevitably, anything from Seat will find itself compared with its Volkswagen contemporary and so it is with this, the Seat Leon Cupra Mk2, whose closest VW relative is the brilliant Golf GTI Mk5. Both share the same platform and when new were on sale at the same time, although the Leon endured a little longer. They’re each powered by a 2.0-litre engine, albeit a 237bhp TFSI in the Leon and a 197bhp FSI in the Golf.

No prizes for guessing which is the faster, the Leon dispatching 0-62mph in 6.4sec and the Golf 7.4sec. In fact, the Cupra’s strong performance has it reaching for the coat-tails of the Mk5 Golf R32, whose 3.2-litre V6 produces 247bhp. However, in all other respects, that model is very different from the Cupra and examples with reasonable mileage are much more expensive.

So round one to the Leon Cupra, except that, as always when a Golf GTI is involved, things aren’t that simple. In short, the Golf is much better to drive than the Cupra – grippier, spunkier and more involving. It’s also more expensive, with, generally speaking, £5995 buying a 2007 GTI with 100,000 miles but a 2009 Cupra with 70,000. There are exceptions, of course.

For someone looking to buy a used hot hatch, it’s this price advantage and, at least on paper, stronger performance that give the Cupra the edge over the GTI. The Leon is also a good-looking car and comparatively rare, too. Rarer still is the Cupra K1 special edition of 2008, although prices for this model vary hugely. Meanwhile, if you’re into tuning, the Cupra can take some hefty power upgrades. How about a reliable 350bhp from a Revo Stage 2 upgrade? It uses all the standard internals with the addition of an induction kit, an upgraded catalytic converter and intercooler, and associated software. It sounds fun, but here we’re interested in standard Cupras and why not, since a factory-spec model is still an entertaining hot hatch. 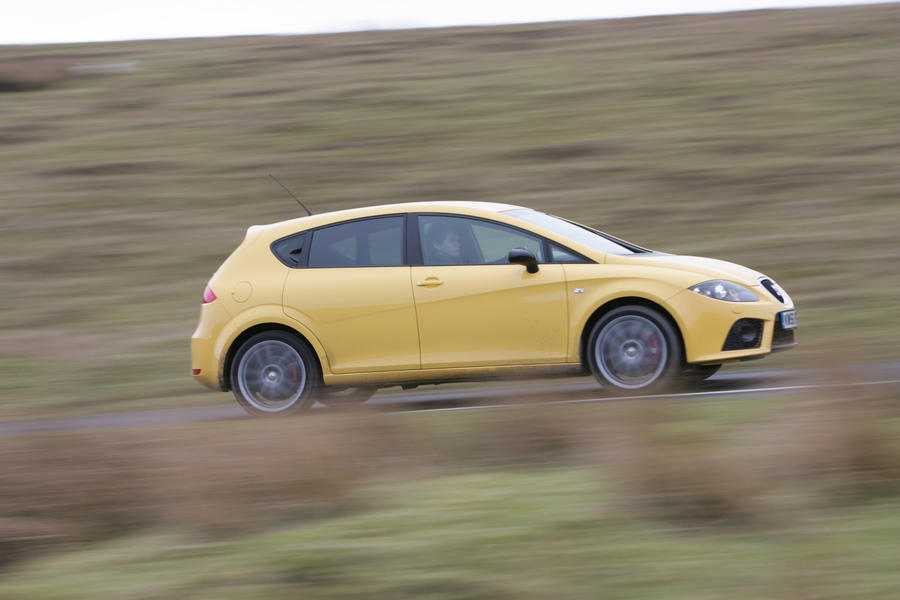 It was launched in 2006 and sits above its Leon FR sibling hatch. The FR uses the same 197bhp 2.0 FSI engine as the Golf GTI and is, arguably, the VW’s closer rival. It’s better value than both cars but the Cupra’s extra oomph is that bit more appealing. Standard kit on the Cupra includes 18in alloy wheels, black mirrors, grippy sports seats and white-faced dials. Under the car, the steering knuckles and rear wishbone pressings are alloy rather than steel, saving 7.5kg in unsprung weight.

The aforementioned Cupra K1 special has a revised rear spoiler and an oval-shaped centre exhaust. Being much rarer, a low-mileage example in good condition is likely to acquire some collector appeal one day.

Along with the rest of the Leon range, the Cupra was facelifted in 2009, when it gained a larger tailgate and subtly revised styling. Well built, reliable, quick and good value – as used hot hatches go, the Leon Cupra Mk2 ticks all the right boxes.

“We’re VW Group specialists and do everything from routine servicing to performance upgrades. I’m passionate about the Leon Cupra. I’ve been working on this model since it was released in 2006 and never encountered any serious issues. The Cupra’s 2.0 TFSI engine is bulletproof and very tunable. It’s fitted with a K04 turbo that has its recirculation valve externally mounted for better cooling. On the Leon FR and Golf GTI, which use a K03 turbo, the valve is mounted on the turbo and suffers from heat failure. My favourite Mk2 Cupra is the K1 special edition. It has an awesome bodykit and a cool centre exhaust. I’d love to have owned one.” 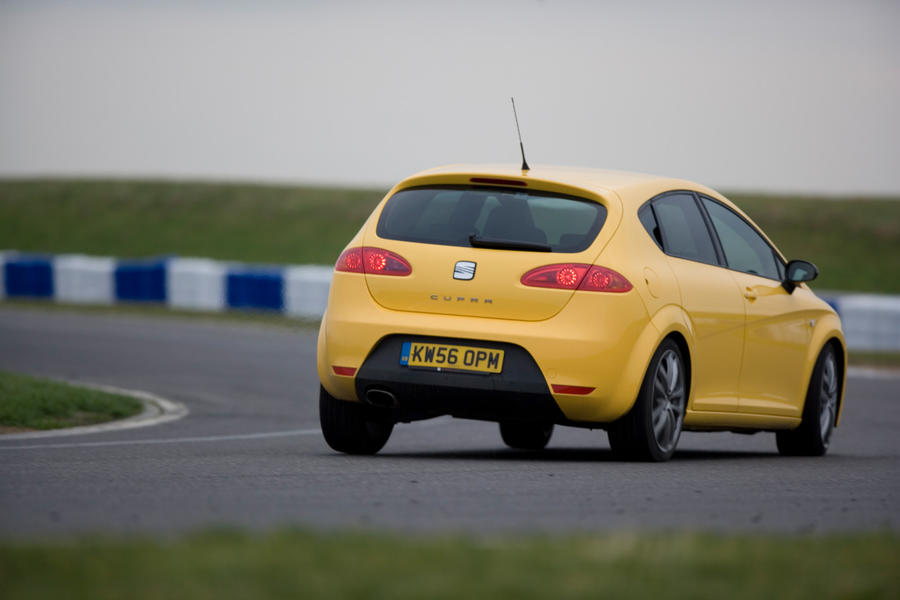 ■ Engine: Carbon deposits in the inlet ports cause performance issues and the runner flaps in the inlet manifold to fail. Removing the inlet manifold every 70,000 miles and blasting off the deposits will help. The timing belt is best changed every 60,000 miles or five years. Cam chains stretch, so listen for rattles: replacement is an expensive, six-hour job. Older or high-mileage cars can suffer worn high-pressure fuel pump lifter buckets caused by worn injectors or contaminated engine oil.

■ Transmission: Ensure changes are smooth and quiet. Otherwise, there are no serious issues.

■ Body: Rust is rare and usually accident-related. Check for sun-bleached head-lamp lenses. Ensure the door locks and windows work as repairs are expensive.

■ Interior: The air-con condenser rots, so check the dual-zone system is blowing cold. Make sure the leather on the steering wheel isn’t peeling away. 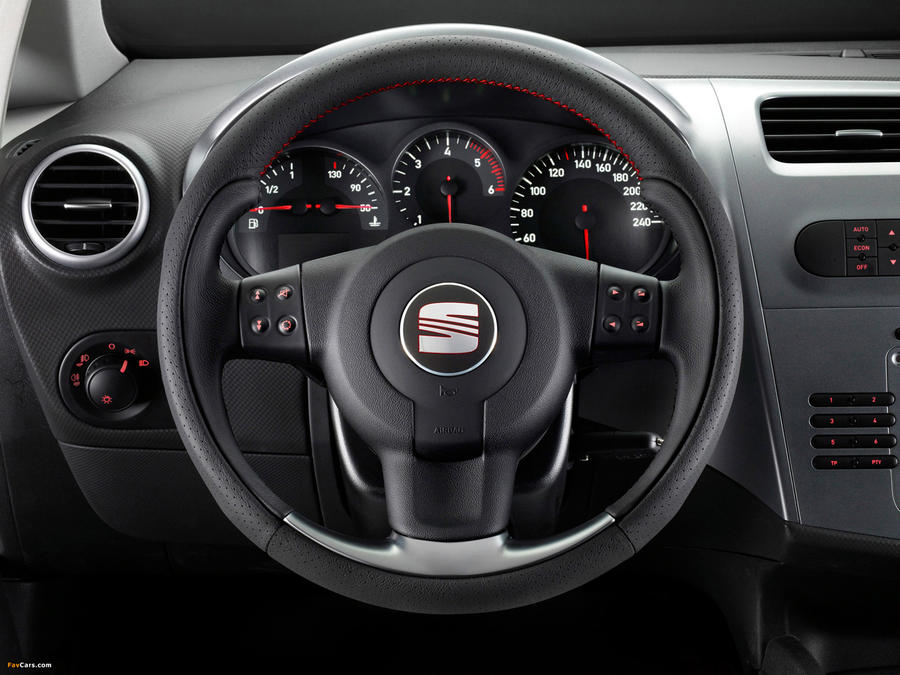 The carbon-fouling issue (see ‘Engine’, left) is not uncommon. Being a direct-injection engine, the Cupra sprays its fuel directly into the combustion chambers. This can cause carbon to accumulate in the fuel injector nozzles. Also, because there’s no fuel in the inlet ports, the ports can gum up with carbon. The result is lumpy running and a dip in power, so test it thoroughly. 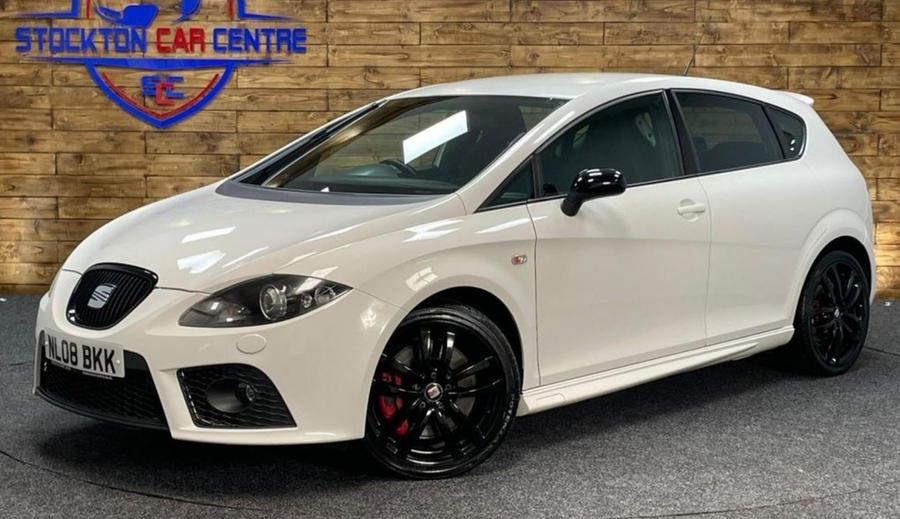 This tidy one-owner Cupra with service history is keenly priced. We were torn between it and a cherished, private-sale 2009-reg with 70k miles and FSH. So we need to see and drive both.

I dont know why Le Seat cupra, didnt Look Like un VW. WeLL, I do but I wont teLL you. WeLL I might teLL you. Cupra had same designer as Lamborghini.

Carbon build up is a problem with any direct injection engine. And you can have it cleaned/walnut blasted for not a lot of money. My advice? Read someone else's buying guide. This one is naff (as always for this website and anything that is used).