Fettled by Renault Sport, the Twingo RS is quick, agile and fun. It’s also available from £1500 these days, which makes it a star buy
Open gallery
Close

Much of Renault’s model line-up has received the Renault Sport treatment over the years. The Clio and Megane have appeared in several RS guises with performance-focused modifications aimed at giving the GTIs, AMGs and Type Rs of this world a few sleepless nights.

This week, we’re looking at the firm’s smallest hatchback, which in hopped-up Renault Sport 133 guise arguably acted as the vanguard for future tiny performance cars. It weighed just 1120kg, cost relatively little and remains one of the cheeriest performance-focused cars we’ve driven.

The previous warmed-up Twingo, the GT, accounted for 25% of all UK Twingo sales, so expectations were high for the RS 133. Sadly, it never quite reached the same heights: Renault sold around 250 Twingo RS models per year from its 2008 launch until it was removed from production in 2013. Not what the sales reps wanted to see, but excellent news for a prospective used car buyer looking for a bargain pocket rocket with real future classic potential.

It performed very similarly to today’s Volkswagen Up GTI, driven by a naturally aspirated, 131bhp (133PS, hence the name) 1.6-litre VVT petrol engine that allowed for a grin- inducing 0-62mph time of 8.7sec and a 125mph top speed. In true Renault Sport tradition, it was marked out from common-or-garden Twingos by a lairy bodykit comprising a front spoiler, a black rear wing and bumper, and sporty 16in alloys, while an optional £650 Cup chassis pack upped its dynamic credentials. Keener Twingo fans will also note the tinted rear windows, bespoke light trim and chrome tailpipe.

The basic Twingo RS was fitted with air conditioning and sports seats as standard, before a stripped- out Cup edition was unveiled in 2009. It sat 4mm lower than the standard model, forewent such follies as window tint and air conditioning, and its rear seats were replaced with a one-piece rear bench for an overall weight saving of 10kg. The reduced equipment was matched with a cost reduction too, because the Twingo Cup started at £11,795 – £700 less than the standard model. The Cup received praise for its go-faster nature and on-track abilities, but lost marks for its rock-hard ride when driven on typical everyday UK roads. 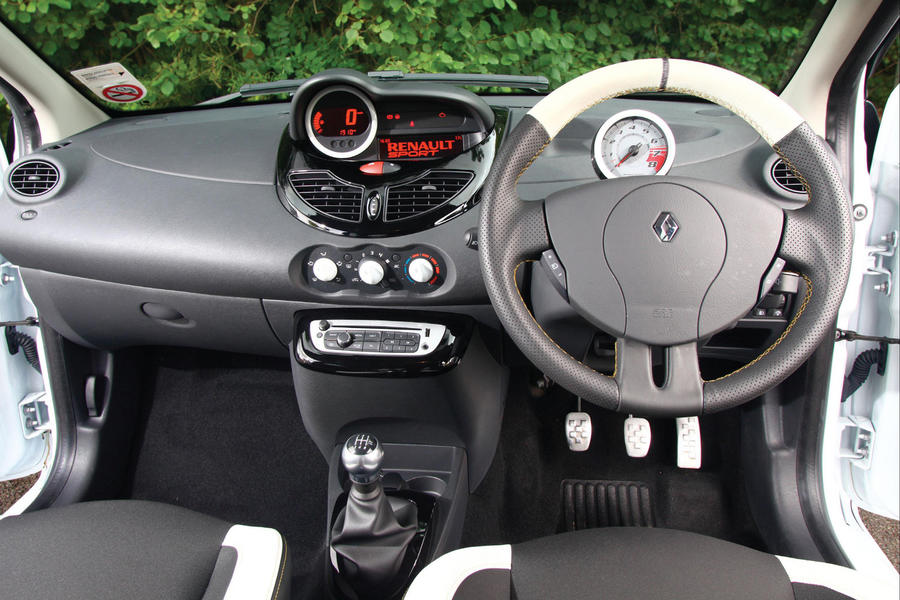 The range-topping Gordini had the biggest kit list, with cruise control, climate control, heated mirrors, leather seat trim and metallic paint included, while the limited-run, Cup-chassised Silverstone GP edition from 2011 holds extra rarity appeal, with its silver paint, stainless steel exhaust and black wheels, spoiler and roof. There’s no need to pay particular attention to the age of each model when browsing. A facelift in 2012 brought a new yellow paint scheme and a bigger spoiler, but virtually all of the oily bits were unchanged.

The 133 can now be picked up for a tenth of its original price if you look hard enough. Newer standard cars are available from around £4000, but while the Cup is the most sparsely equipped model (barring the extremely limited Silverstone GP spec), it’s well worth hunting for if you’re seeking an agile and exciting road racer. That’s if you don’t mind ruining a few T-shirts because of the lack of air-con... It’s a sacrifice worth making for one of the best small performance cars you can buy. 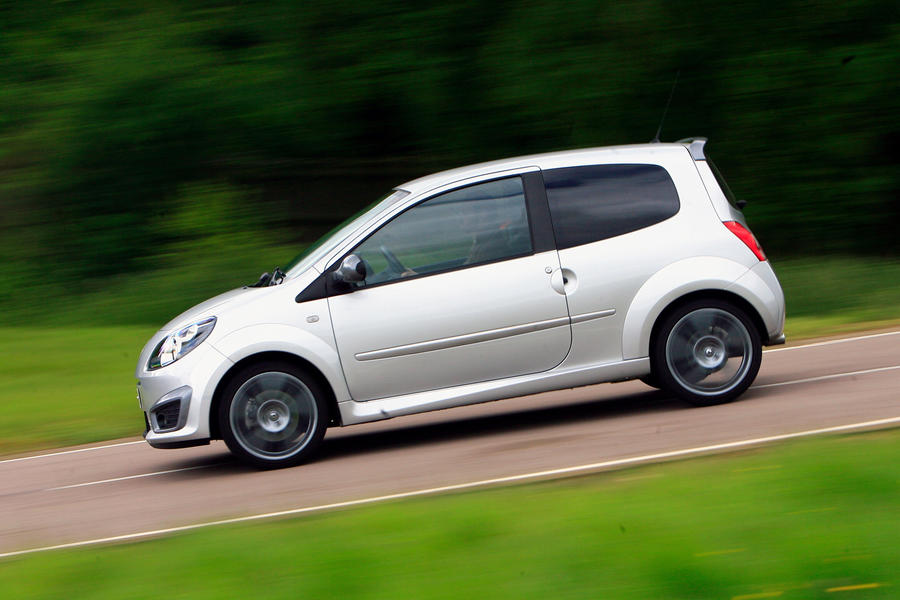 “Engines are strong and reliable, as are the gearboxes, and we see several cars that are used regularly on track without any issues at all. As an entry into the world of Renault Sport ownership, it really is a great place to start. They’re fantastically agile and capable little cars, with great handling with the Cup chassis, and its engine is keen when revved. They really do live up to the term ‘pocket rocket’... We have had great success tuning them with remaps, exhaust and camshaft upgrades and have seen over 160bhp.”

■ Engine: It’s generally reliable but some may have been run ragged by boy-racer owners or on track days. Take note of maintenance schedules. Cambelt change is every six years or 72,000 miles and can cost around £500. Servicing is every year or 12,000 miles.

■ Steering: Steering nuts can come loose, which will cause clunking from the front end. Some drivers have reported a more serious steering rack fault, diagnosed through the sound of cracking or grinding. This can lead to compromised steering and a steering rack is expensive to replace.

■ Suspension: Issues may be ball-joint related from years of enthusiastic driving. Many drivers think the Cup suspension pack compromises the ride too much for it to be deemed a benefit. Consider test driving a model with and without the Cup chassis to make up your own mind. 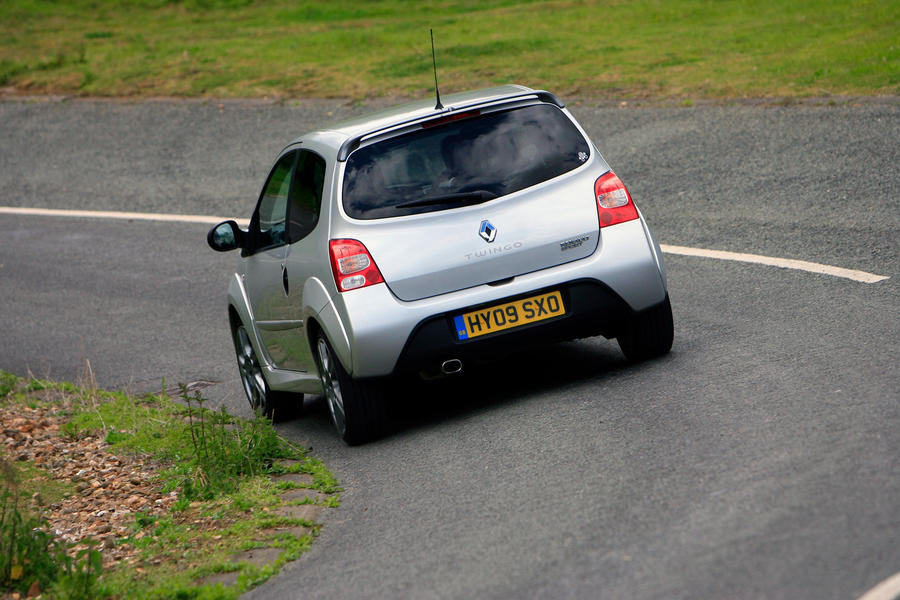 ■ Tyres: The Twingo RS was sold with Continental ContiSportContact tyres. Performance-based tyres like these are available but on the pricey side, such as ContiSportContact 3 tyres for £98.97 each. Some used models will have had these replaced by more standard rubber so be sure to check.

■ Specification: Many online adverts for Twingo RS cars don’t list the specification level. Ensure you check all available documents and refer to an equipment list before you dive into a purchase. Look out for lowered suspension, removed air-con and one-piece rear seats for Cup models. Gordinis have 17in wheels over the standard 16in items, and often come with Renault Sport racing stripes.

The facelifted Twingo 133 will have cheaper road tax thanks to its lower emissions output. Earlier models produce 165g/km and will draw a cost of £210 annually, whereas later models from 2012 onwards produce 150g/km and cost around £170 a year to tax.

£4000-£4999: Facelifted cars with lower mileage and some older models with custom mods.

£5000 and above: A few later models, with some optional extras and sub-30k mileages. 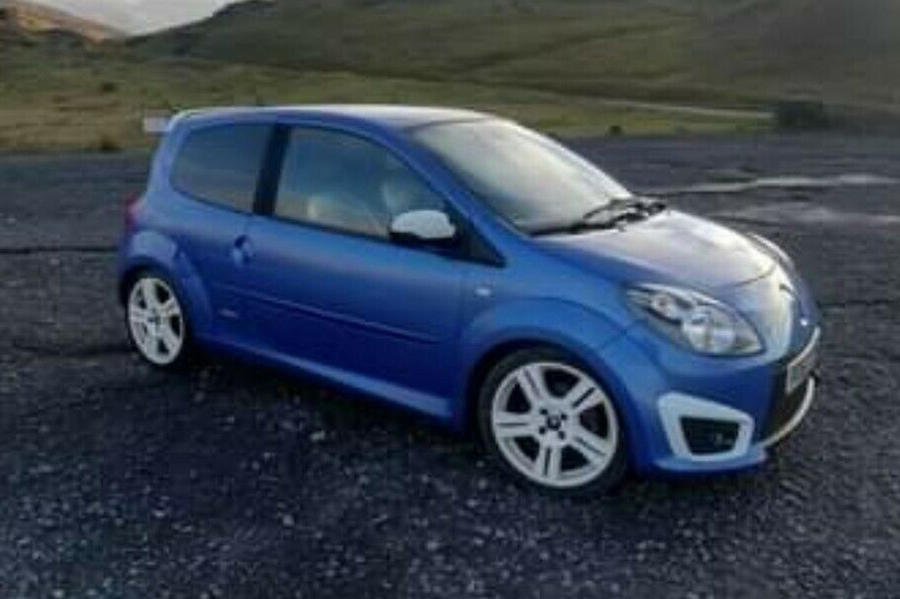 RENAULT TWINGO RS 133 GORDINI, 2010/10-REG, 105K MILES, £3000: In good condition with a full service history, this Gordini model has all the kit you need, including air conditioning. It’s on the standard chassis, but it has new Brembo brakes and four Michelin Pilot Sport 4 tyres. It was recently serviced using genuine Renault parts and had its timing belt and water pump changed last year.

@si73 agreed.  As cool as this RS Twingo is, it feels like Renault really should have made a hot version of the RWD model.

si73 26 July 2021
These are great, even the little 1.2T GT or gordini are fun and reasonably quick, imagine what they could have done if they'd tried with the latest rear engined rwd twingo, it was crying out for a Renault sport version.