The rally-bred Ford Escort RS Cosworth of 1992-96 is already a cult classic, and it’s only going to rise in value. We explain how you can get hold of a good one
Open gallery
Close

The Audi Quattro, Lancia Delta HF and Peugeot 205 GTi have soared in value in recent years, not just because of the surge in demand for 1980s performance cars but also because of their relationship with the most fondly remembered era of the World Rally Championship: Group B.

But what of the cars spawned from that thrilling category’s successor, Group A? Clean, early examples of the Audi Coupé, Subaru Impreza and Toyota Celica are remarkably easy to find and available for a relative pittance, but one from this period is quickly entering the upper echelons of cult car desirability: the insane Ford Escort RS Cosworth.

Here was an affordable family car modified to accelerate as fast as the Ferrari Testarossa, hit 150mph and tackle some of the most brutal terrain international motorsport had to offer.

Underneath its outlandish, oh-so-1990s bodywork are evolutions of the engine and four-wheel drive system that underpinned its legendary Sierra predecessor, with Cosworth’s revered YB turbocharged four-cylinder unit uprated to the tune of 224bhp.

The 2500 homologation specials that came first used the same colossal Garrett turbo as Ford’s formidable Group B racer, the RS200, while later cars got a less laggy smaller unit that improved usability and was a lot less prone to spontaneous combustion.

Much is also made of homologation cars’ underseat water injection system, but it was only put there so that Ford could install a turbo-cooling device in its competition cars and doesn’t make the early Cosworths superior in any way.

The Cossie’s trademark whale tail was the work of young designer Frank Stephenson, who would later prove his affinity for stylistic exuberance with the Maserati MC12 and McLaren P1. Buyers could have it deleted towards the end of the car’s life, but you’ll struggle to find an unspoilered example these days. 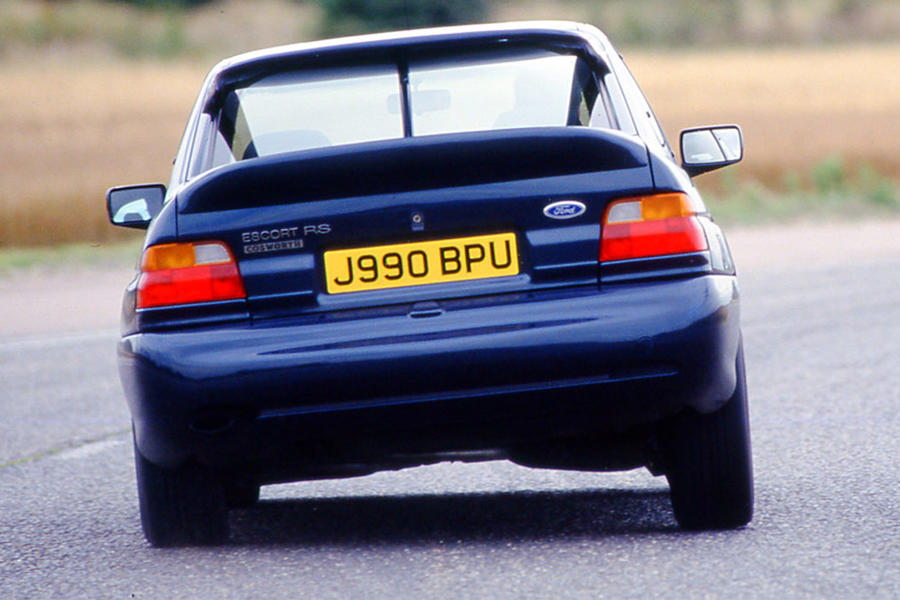 Three trim levels were available during the four-year production run. Motorsport got a cloth interior and little in the way of embellishments; Standard added a radio and central locking; and Lux was, as the name suggests, the best-equipped.

With its pop-out rear windows and standard-fit sunroof, the latter is the most prevalent today, with prices starting in the mid-£30,000s for tatty high-milers and rising to around £60,000 for dry-stored examples with reams of receipts and unchanged powertrains.

Untouched Motorsport cars are harder to source, having mostly been modified for use in, erm, motorsport, but they do crop up occasionally – usually finished in Diamond White and with an £80,000-plus price tag.

The YB motor isn’t rapid by modern standards but is highly tunable. The smaller turbo can handle only about 300bhp, though, so speed freaks often upgrade to the bigger one. Like many cult classics, it’s the factory-spec cars that command big bucks, so avoid any with aftermarket bodykits and energy drink logos. 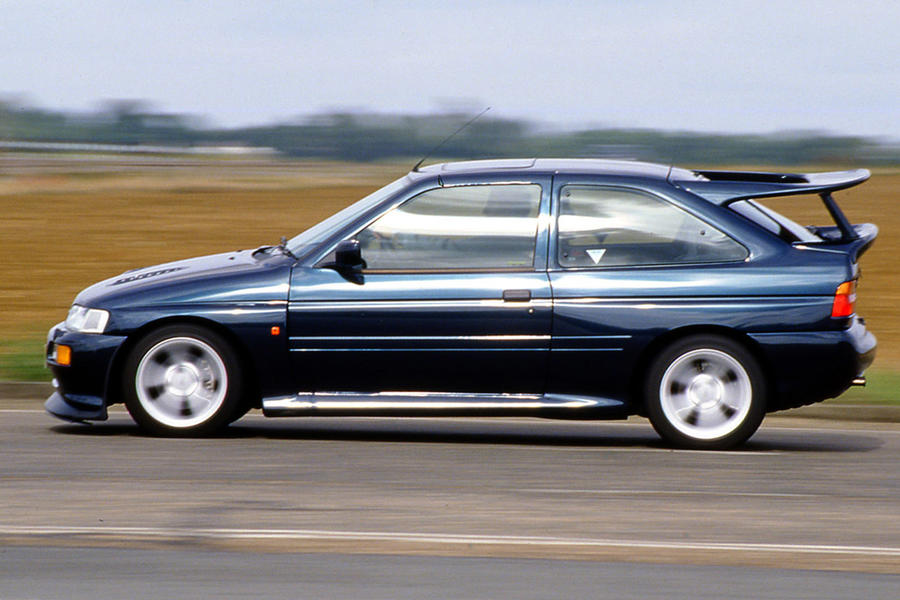 James Wills, Auto Dynamix: “This is the ultimate cult car. The one we all wanted. The poster on the wall. Low-mileage examples can go for £80,000 and, once one sells to a collector for that sort of money, it commands the price for all the others. That’s why prices rocketed in just a few years. Look at Renault 5 Turbos, Vauxhall Novas and the like: they have also risen to mind-boggling figures for pristine examples.”

■ Engine: Dripping oil will usually be coming from the cam cover, so check the side of the block and the cambelt for signs of a slick. Some smoke under acceleration is forgivable, but excessive puffing at idle could give cause for concern. Any modifications carried out unprofessionally definitely will.

■ Steering, suspension: A radically lowered front end is detrimental to the Cossie’s famed handling characteristics and can cause driveshaft issues. Similarly, polybushes and adjustable rear beams improve performance on track but don’t make for a fun road experience.

■ Bodywork: Panels are generally solid, but look for corrosion at the base of the rear windscreen, around the fuel filler cap, below the battery, at the front of the floor pans and behind the side skirts. 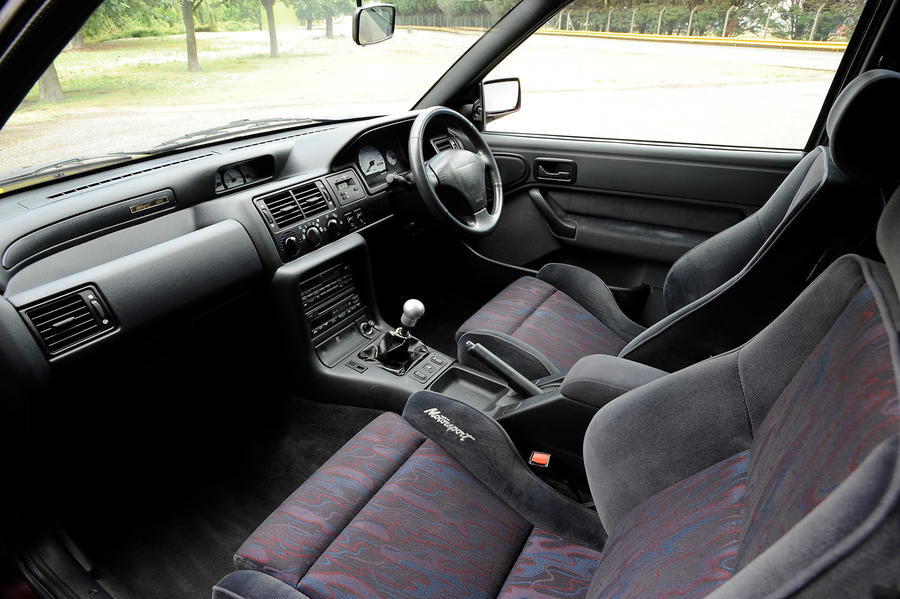 ■ Interior: Headlinings wear over time and can fall down, while leather seats will start to look tired, depending on mileage. The electroluminescent gauge cluster starts to look mouldy as panels fail but is easily replaceable. Enthusiasts bemoan ‘RS Tax’, which has driven the price of hard-to-find clips and trim pieces into the hundreds of pounds.

■ Brakes: Modified cars with more than 300bhp need beefier brakes, so ensure these are present and correct. Otherwise, the system is reliable. Check around the brake pump for heat damage caused by the lack of a turbo shield.

■ Gearbox: The five-speed MT75 gearbox is hardy but noisy by modern standards. Heat from the turbo can fray the clutch cable, so check the pedal for heaviness.

■ Electrics: Ageing wiring for the fusebox, fan and fuel pump are prone to failure. Check behind the dash for any remnants of a badly installed aftermarket alarm.

The rally-inspired Monte Carlo edition of 1994 is the rarest and most coveted Escort RS Cosworth. Just 70 of 200 were for the UK, sitting atop bespoke OZ Racing wheels and painted Ash Black, Mallard Green or Jewel Violet.

£35,000-£44,999: Low-mileage, original-spec Garrett turbo cars – including a rare Radiant Red one with a stainless steel exhaust.

£45,000 -£59,999: Collector cars fresh from restorations and heated garages, along with some professionally prepared rally cars. 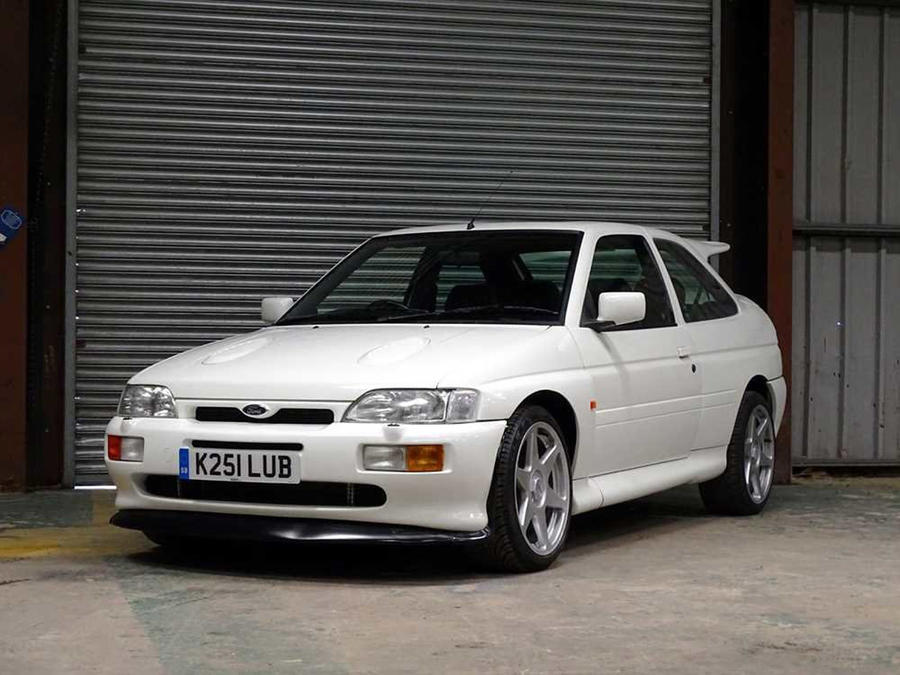 Why you can still buy a Ford Escort in China

History of Ford RS in pictures

Felix Page thinks the Lancia Delta HF has soared in recent years?  Group A era Integrales for sure.  But not Group B era HF Turbos.

I recall the top speed of the Escort Cosworth being 137mph according to this magazine.  Ford never claimed 150mph.