BACK TO ALL OPINION BLOGS
Currently reading: Why you can still buy a Ford Escort in China
UP NEXT
Matt Prior: Car makers should prioritise profit not volume

Why you can still buy a Ford Escort in China

Back at the 2013 Shanghai motor show, there was a bemusement/excitement at the return of the Ford Escort to the motoring world on a new concept saloon.

Before we could even ask the question (the 'Is it coming back to the UK, then?' one), Ford’s press office had already answered the phone with the word ‘no’.

The new Escort went on to to make production in 2015, based on the Mk2 Focus. Earlier this year at the Beijing motor show it was replaced, a story that was not only autocar.co.uk’s most popular that day among a sea of new metal, but also one of the most popular of the whole year.

Inspired by your interest (and, I’ll be honest, my own), I went to have a closer look at the Escort at the Guangzhou motor show today. But first, some background.

Clearly, the Escort name has none of the toxicity attached to it that it had when it limped out of Europe as the first-generation Focus was launched. It’s one of Ford’s most popular models in China.

Between its original launch and the end of August 2018, more than 900,000 of them had been sold in China – a figure that will reach one million by the end of this year or early next year. In that same period, just under 700,000 Focuses were sold in China, where it's sold alongside the Escort in the same class.

Why two such similar-sized cars in the same segment? It’s not just to do with size positioning, but price. While Chinese car sales are reported as a whole, the size of the market means that there are quite diverse requirements across the regions. So while the likes of Beijing and Shanghai car buyers might not have the need for a simple, budget saloon, there are hundreds of thousand of buyers in other parts of the country that do. That’s not unlike a car buyer in the UK or Germany having different needs or tastes from one in Romania or Poland.

As a result, the Focus and Escort co-exist quite happily within Ford’s range in China, and on the Guangzhou motor show stand. First visual impressions: the Focus dwarfs the Escort in visual bulk, and the Escort looks quite awkwardly proportioned.

The Escort is also brown, which isn’t the most desirable of car colours. But it’s handsome enough, with Ford’s latest front end design and a bootlid that proudly boasts of being in the plusher Titanium trim below the Escort badge, something that raises a smile whenever you look at it.

Inside, there’s more brown, and lots of plastics that are hard and scratchy, with the odd sharp edge. It feels built to a cost, and it is. With added plushness comes added price, and added pointlessness for offering the car in the first place. The Escort seems honest, robust and likeable.

And that age-old question: could the Escort name ever come back to the UK? We doubt it. But then, Toyota has just brought the Corolla name back from the dead…

The best of Guangzhou motor show 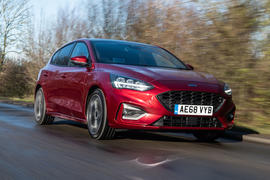 Seems, from the pictures, to be a far more cohesive design than the Focus which looks like its gone saggy having melted under a hot sun.

Theres something deeply wrong with the styling of the latest Focus, it looks like it sags in the middle, the proportions are awkward and each element appears to come from a different car.

Doesnt seem to be hindering sales though!

The interior is much nicer

The interior is much nicer than the latest Focus.

Was just about to say...

Comments before mine suggest I'm far from alone!

Due to the limitations of the Camera lenses you can’t get a true idea how this Car looks.

Am I the only one who doesn't like the current Focus front end design? It just looks less sharp than the previous Aston-inspired headlight design.

And the same with the Chinese Ford Escort, the previous model looked better.

The mk5 effectively killed off the Escort in the UK, Ford upped their game starting from the Mondeo, and some ugly facelifts to the mk5 with some under-the-skin improvements meant it limped on until the original Focus met the then-benchmark Peugeot 306/VW Golf.

I do still like it though, sadly I don't think a budget saloon would sell at all in the UK, even Dacia don't sell the Logan saloon (though they do sell the estate MCV). They do get away with selling the budget SUV Ecosport here though, because the UK market is SUV obsessed.

The closest to this are the outgoing Skoda Rapid 'hatchback'(not spaceback) and the axed SEAT Toledo, both saloon-shaped fastbacks but are sold as VW saloons in China.

Why is everyone gushing over the design of this monstrosity?

To me this looks like the second-rate budget saloon that it is. It's ungainly and already looks dated in my opinion.

It may to our tastes look cheap inside,but the dash layout is better than some here,and, with a bit of fettling here it would sell.....

Be strong and star

This is just one of the many purposes that Norton Login Account serves for its users. In fact, it gives you complete management control over your Norton products, subscriptions, services, protected devices etc.