In the TV show Friends, Phoebe once said: “Load up the Volvo. I want to be a soccer mom” – and this essentially sums up the manufacturer’s past image. Particularly with its estates, you often found yourself buying one purely because of its sensible, practical qualities that worked for your everyday family life.

Travel to the present, though, and it’s a somewhat different story. The Volvo V90 we’re featuring here is a far cry from its boxes-on-wheels predecessors. Sure, it remains spacious and easy to live with, but now there’s much more style and luxury mixed in. Designer Thomas Ingenlath managed to keep the family-friendly interior but mix it with a healthy dose of Scandi-cool.

The materials used throughout the interior look and feel expensive, while a 9.0in portrait touchscreen takes centre stage on the dashboard. The whole layout is easy to use and serves as a fine exemplar for that old cliché about Swedish common sense. 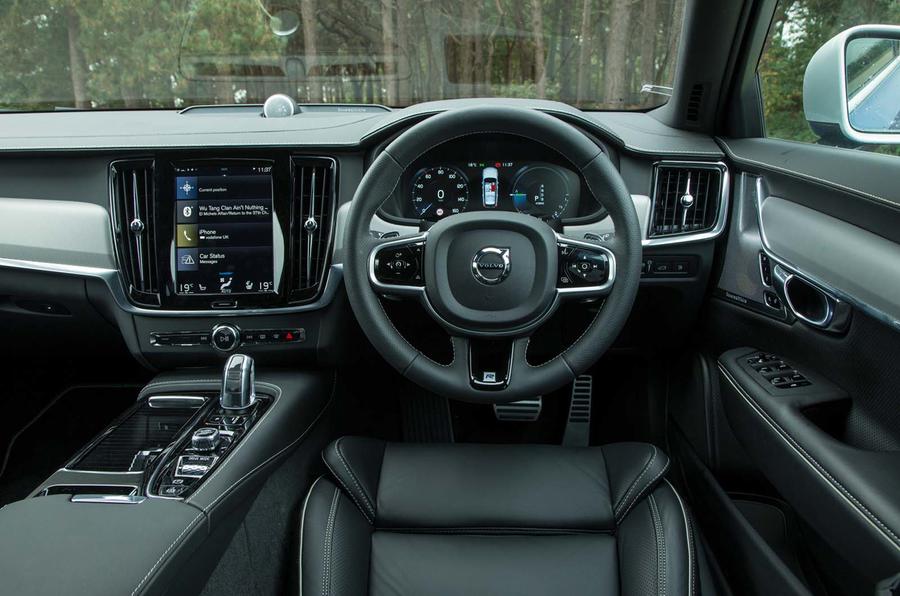 Volvo understands consumer demand for equipment, too, so the model doesn’t hold back. Even with the entry-level Momentum trim, you get LED headlights, heated leather  seats, sat-nav, Bluetooth and DAB radio. On top of that, it has a powered bootlid, keyless start and rear parking sensors.

Second-hand Inscription cars are around an extra £2000. They offer extra interior lighting, nappa leather seats and a larger, 12.3in digital instrument cluster, plus bigger alloy wheels and electric front seats. Go for R-Design and you will find it starts at a similar price yet features firmer suspension for a sportier drive.

Without said suspension and especially on the (optional from new) adaptive dampers, the V90 is very much a wafty, capable cruiser. It rides over most surfaces at town speeds in a composed fashion and its motorway refinement is excellent. The model handles pretty neatly as well – R-Design cars particularly so. 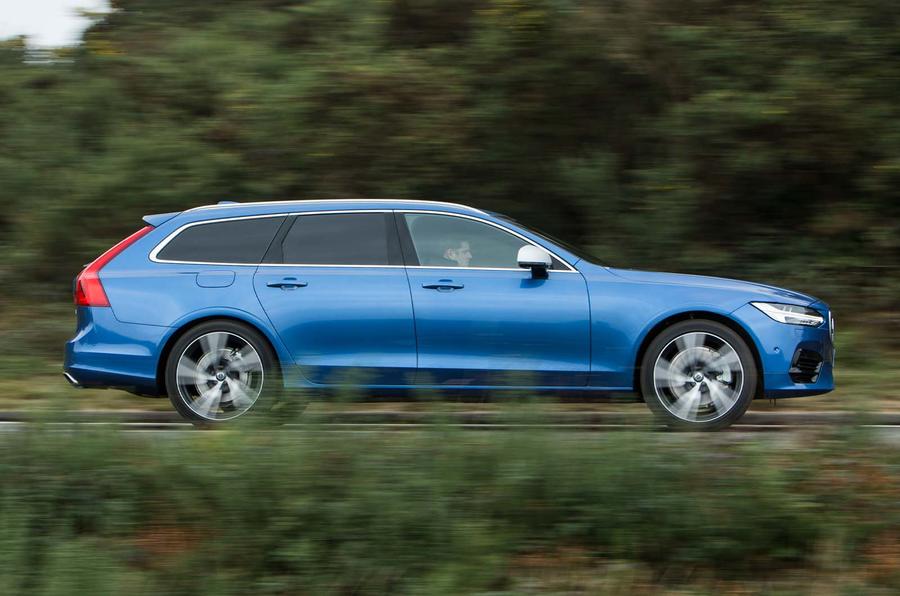 The 385bhp T8 often goes for upwards of £30,000 and could be considered a wolf in sheep’s clothing. It’s a petrol-electric plug-in hybrid that’s extremely quick to accelerate, as is evident in its 4.8sec 0-60mph time. The hybrid set-up also shuffles between power sources effortlessly.

For 2020, Volvo brought in mild-hybrid technology featuring a 48V integrated starter-generator. These units begin with a ‘B’ to distinguish them from the regular ‘D’ and ‘T’ engines. For instance, there’s a 197bhp petrol called B4P, as well as a 197bhp diesel dubbed B4D. The most powerful engine with the mild-hybrid tech is the 300bhp B6P. All come with 2.0-litre petrol or diesel units.

Trims have also been revised: for 2022, the range has become Core, Plus and Ultimate, although few of these cars had hit the used market at the time of writing. 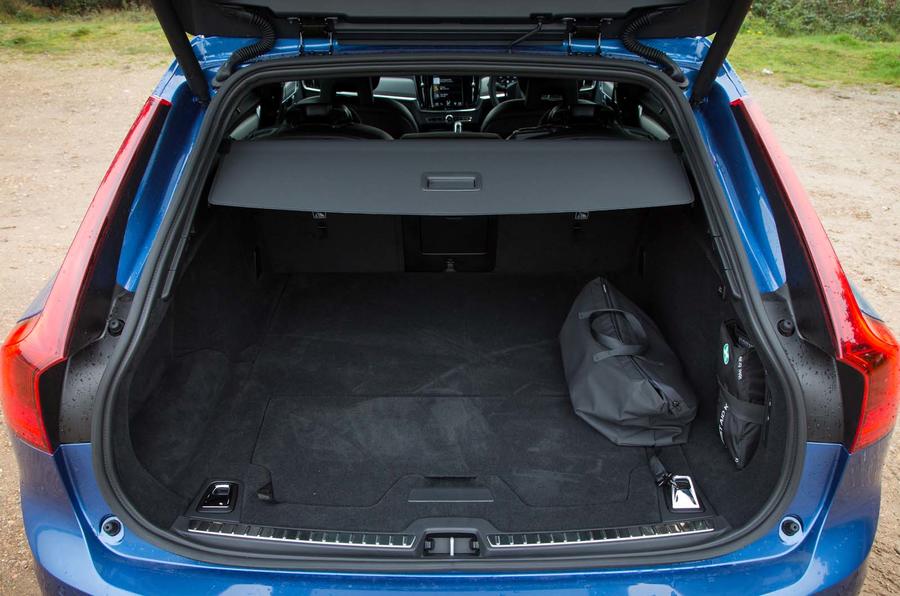 The V90 is superb at accommodating four adults with space to spare and there’s class-leading knee room in the rear. It’s more of a squeeze (in terms of width) for three larger adults in the rear, but three children can sit side by side easily.

The boot has 560 litres of space – the same as the BMW 5 Series Touring. In other words, there’s enough room for eight suitcases.

Safety is a given with a Volvo and the V90 scored the maximum fivestar safety rating from Euro NCAP. 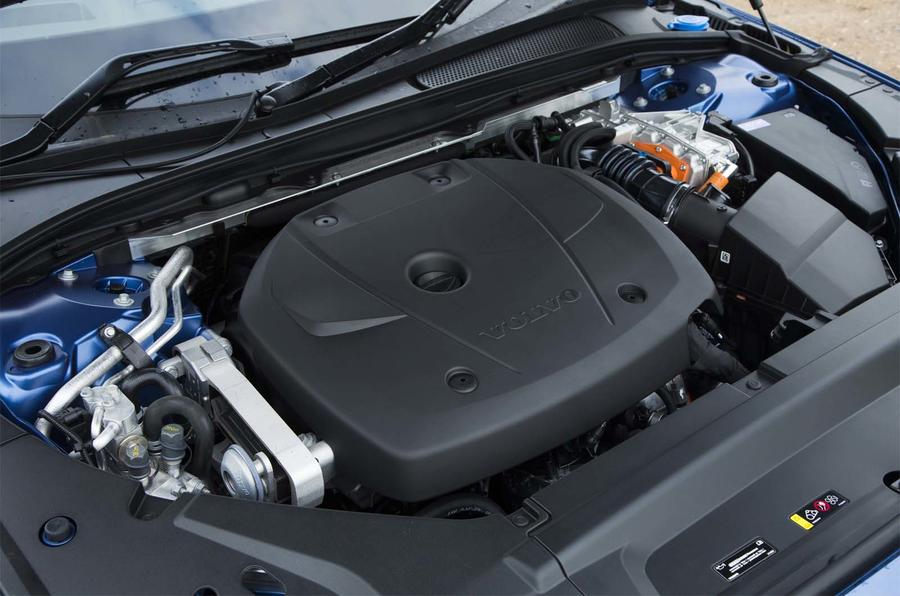 Recalls: Volvo has recalled around 70,000 cars in the UK fitted with a 2.0-litre diesel engine because of potential engine fires. Owners were told to pay attention to any unusual smells coming into the interior, if the engine warning light illuminates, or if the engine hesitates under acceleration.

If you believe your car to be involved in this recall, contact a Volvo dealer.

Trials of family life: The V90 will have been used on motorways as well as on school runs, so check the bodywork for stone chips and parking scuffs. Also watch out for damage to the alloy wheels.

There are some lighter interior trim colours in some versions, so make sure there are no stains on the seat upholstery or on the carpets in the footwells and boot. 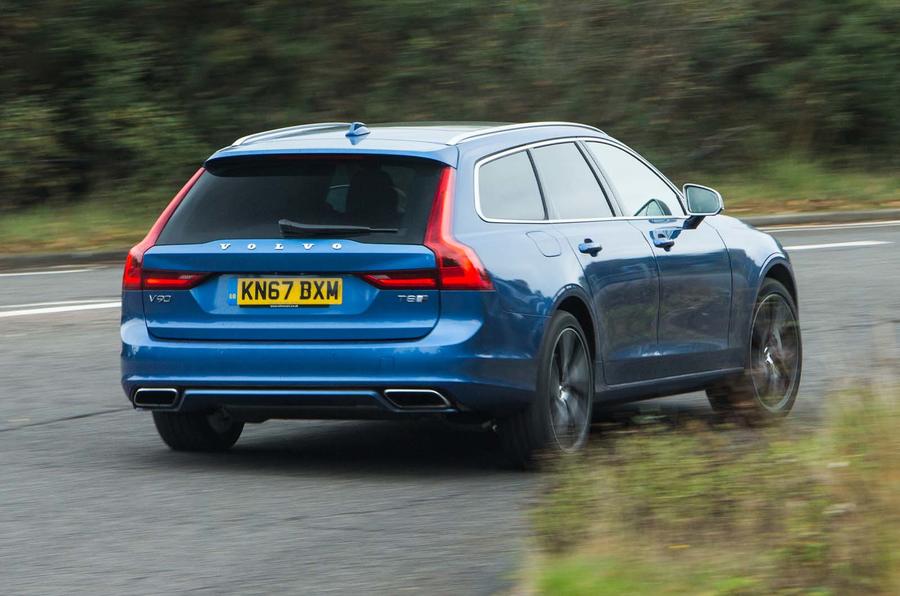 Momentum: The V90 comes well equipped straight off the bat, so unless you have cash to splash or an unshakable desire to upgrade, the entry-level Momentum will prove more than sufficient.

D4: The lower-powered diesel far outnumbers any other V90 engine on the used market. Why? Because its blend of performance and economy suits most buyers perfectly and it’s also affordable to buy.

T8 PHEV: A supercharged and turbocharged 2.0-litre petrol engine driving the front wheels, and an electric motor on the rear axle. The two can be used individually or together for explosive performance.

Deisel?, isn't that a social pariah these Days?, good as the Car may be, if Deisel as a fuel powering Cars has nose dived in the past few years, ok, maybe another ten years grace before they're banned , but trade-in values will slip.