BACK TO ALL NEWS
Currently reading: Audi RS4 (B5) review | Past Masters
UP NEXT
Volkswagen ID Buzz to kick-start wave of enthusiast-oriented EVs

Fast Audis evoke strong feelings in many enthusiasts, and this car is one of the main reasons they do so.

The original RS4 set the template for the RS brand, combining enormous power and immense four-wheeldrive traction, the latter making the performance accessible to any driver, whatever the weather.

Mercedes and BMW, and that lack of engagement is the key fault their detractors hold up against them. But the RS4 is an old car now, with hydraulic steering and all the feel that should go therewith, so is it really that unenthralling?

It’s an easy car to want, and few fast cars strike the balance between subtlety and aggression quite so well. Where modern cars pout with snarling mouths and muscular creases, the RS4 has the veiled menace of a nightclub bouncer who’s found out someone has been harassing the bar staff.

It’s lovely inside, too. Modern weight-saving and cost-cutting measures mean today’s interiors no longer have the heft they did in the RS4’s day. Yes, it looks a little dated now, but not as much as you’d think. The particular car we’re driving has the optional bucket seats, but they feel like overkill because the RS4 is too weighty and luxurious to be a track car. It’s an estate, after all – a fact which, incidentally, brings its own advantages. Few neo-classics with this sort of performance can be enjoyed by the whole family. 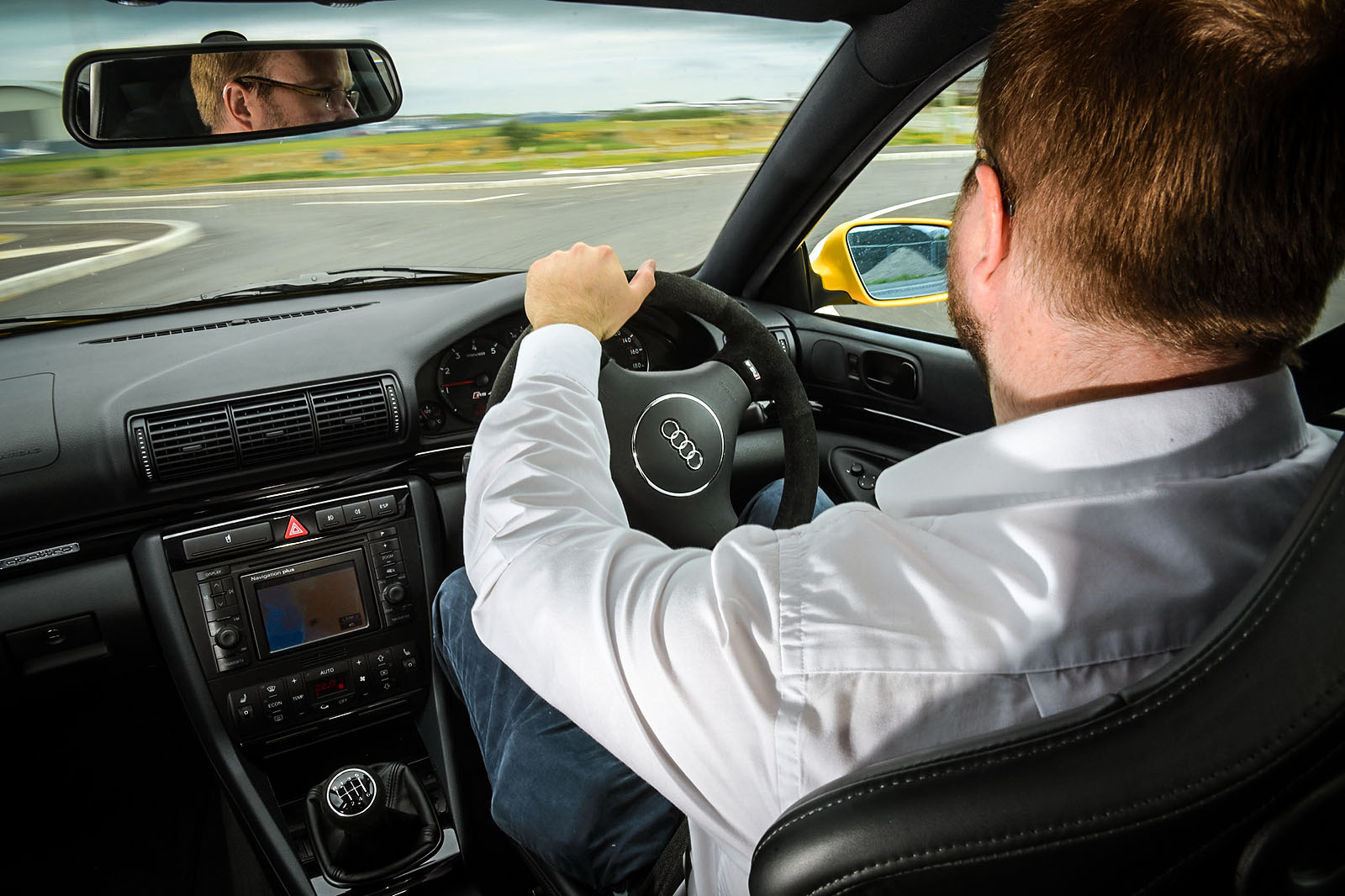 And it is quick. There is turbo lag, but it’s minimal and doesn’t matter in any case because the 2.7-litre V6 is gutsy in its own right. From a standstill, all four wheels hook up and before you know it the two turbos come on song, which has the effect of turning the scenery into smears in your peripheral vision and making whatever was half a mile in front of you approach extremely quickly.

It’s classic fast Audi at its best: mind-bending performance, delivered with refinement and understatement. And wet or dry, the RS4 hooks up and does its thing in almost exactly the same way.

But what of involvement? It’s true that the RS4’s steering doesn’t give the same level of feedback as many older performance cars, but there’s enough here to feel what’s going on. To think of this car as the ultimate driving machine would be a mistake, but as a tool for covering ground at the fastest possible pace, it excels.

Push hard – and you have to push harder than you’ll probably want to, because it’s pretty unstickable – and the RS4 will understeer gently instead of indulging in lurid drifts. All very safe. But don’t think there isn’t exhilaration here, because before you get to that point, the RS4 will corner speeds that your brain tells you should be untenable. The joy is in hoofing the throttle mid-corner in a thoroughly uncouth manner and marvelling at the way the car magics grip and traction into existence and catapults you out of the bend while you cling on and enjoy the ride. 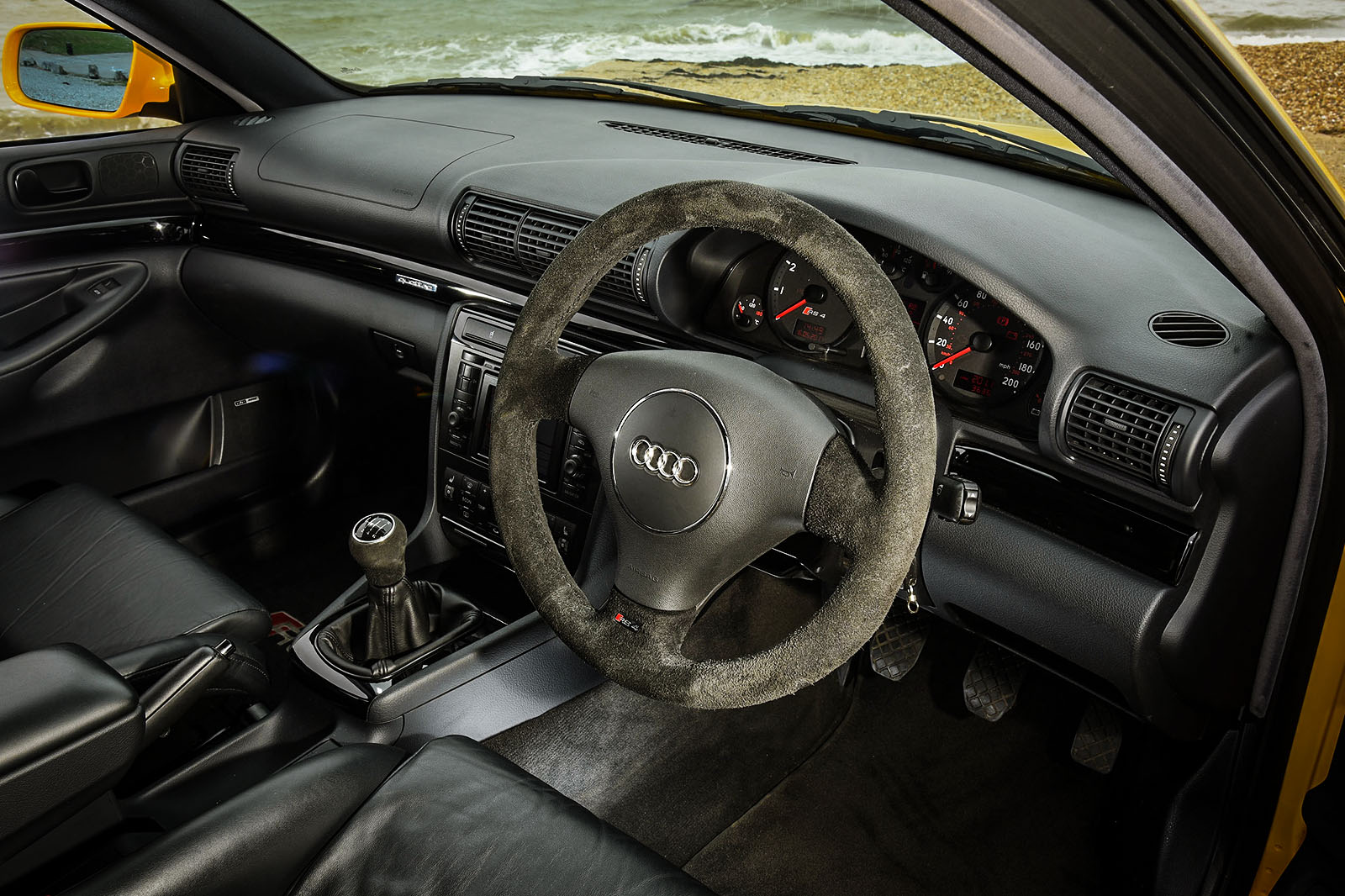 But didn’t all of these fast Audis have rock-hard rides? Perhaps time and a succession of vast-wheeled, harshly suspended sporty trim levels have desensitised us, but the RS4 doesn’t feel unbearable. For sure, it isn’t soft, and it does crash when it catches a particularly deep pothole, but even with these bucket seats, it doesn’t feel uncomfortable to this tester’s pernickety backside.

The RS4 can’t compete with its contemporary rivals in terms of pure involvement. It doesn’t have the adjustability or the depth for that. But then that isn’t the only way a performance car can be enjoyed. What the Audi gives you is sensational grunt, delivered any time you like, and that is exciting in itself. Then there are the superb looks, the practicality and sense of quality, all of which are enough to give even the most committed Audi sceptic something to think about.

Fancy buying one? Read our used buying guide for the Audi RS4 here

I agree, far too many w4nkers

I agree, far too many w4nkers driving like loons in 10 year old lowered RS3's with vapour billowing out the window from their E cig's.
Peter Cavellini 25 July 2017

There is a lot of fast metal out there for not a lot these Days,trouble is, it gets into the hands of the inexperienced, the ones with to much money and not a lot of sense,there should be some test you must take or course which is mandatory before you can get your hands on anything like the RS4, I dare say an assemen of your faculties before that too, infringement of human rights....?, might save a few lives though, mighten it....?

Describing a car as a "weapon" denottes an unfortunate attitude.