BACK TO ALL NEWS
Currently reading: Under the skin: a crash course in making electric cars collision-safe
UP NEXT
New Aston Martin DBR22 is £1.5m, V12 speedster

Under the skin: a crash course in making electric cars collision-safe

EVs have different structures and safety technology to provide protection in a collision. We take a closer look
Open gallery
Close

How safe is an electric car in a crash and what are manufacturers doing to make them safe? These questions crop up a lot and are usually triggered by lurid videos of an EV being consumed in a battery-fuelled inferno, but that doesn’t make electric cars any more dangerous than their fossil-fuelled equivalents when things go wrong.

To minimise damage to the high-voltage battery in an impact, manufacturers are rethinking their approach to vehicle architecture. Fully encased, floor-mounted batteries provide a protective environment but deflecting the energy of an impact away from the battery is also important.

Polestar has developed the ‘SPOC Block’ (severe partial offset crash) for its 2 EV. This consists of two aluminium blocks set in either side of the front bulkhead. The blocks prevent front wheels being driven backwards into the battery compartment during a partially offset frontal collision.

The EV also has a new front lower load path (FLLP – how the structure diverts the forces from an impact) to further protect the battery and occupants from frontal impacts, including one of the worst: from a pole.

Design can help push back the threshold of fatal injury to a car’s structure but eventually the laws of physics have their way. All cars rely on one fundamental thing to do their job and that’s energy – and lots of it. MPGe (miles per gallon gasoline equivalent) puts the energy contained in a single gallon of petrol at around 40kWh, equivalent to the battery capacity of many smaller EVs. Whether a car is powered by a battery, petrol or diesel, the energy it stores is likely to be released in a major crash.

EV batteries are a little more tricky than conventional fuels because a fire inside one is due to thermal runaway, when the heat produced causes damage that results in more heat being released. It’s difficult to extinguish because the battery is made up of several thousand individual cells and there will be sections of the battery that are still active and still contain energy. If the damaged battery is disturbed, thermal runaway can resume until the battery is totally kaput.

The other major difference between conventional and all-electric cars is high voltage. EVs operate at around 400V, and while the Porsche Taycan is the first EV with an 800V system, it won’t be the last. For a car’s occupants or emergency services personnel, damaged high-voltage cabling could be lethal, so in a crash, the battery is disconnected at source.

This isn’t a new idea: it has been a regulation in motorsport for decades to prevent electrical sparks igniting fuel in a crash and all race and rally cars must be fitted with either manual or electronic battery disconnect systems.

The usual method for disconnecting an EV battery is the firing of explosive ‘pyrofuses’, which sever the high-voltage cables close to it. Bosch revealed a new device last year triggered by a silicon chip responding to the airbag system that drives a small sharp wedge through the cable. 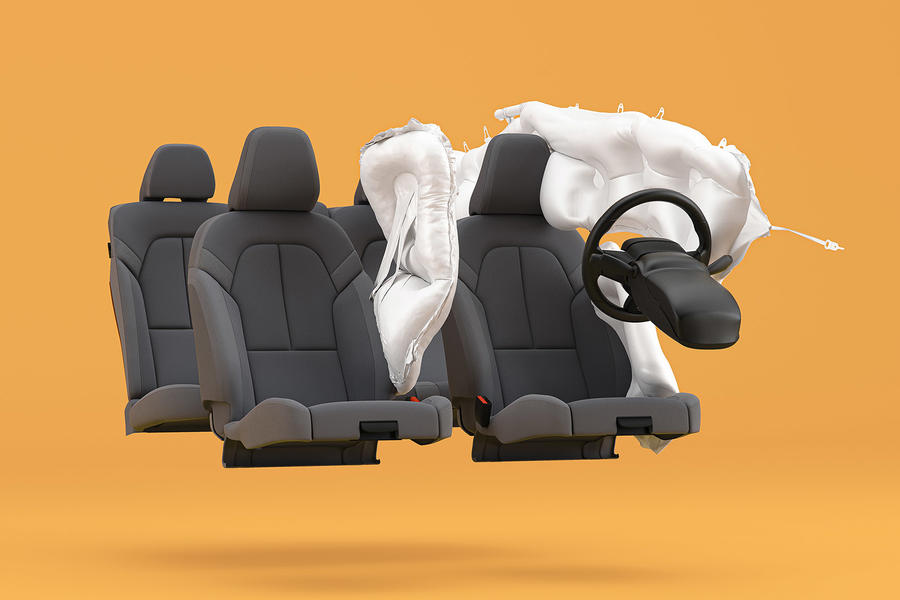 A side helping of safety

A side impact can be one of the most dangerous types of crashes and – as well as energy-absorbing door, sill and B-pillar structures – the interior trim and side, curtain and seat-mounted airbags are used to protect occupants. The Polestar 2 also has front seat side airbags to protect individual occupants’ limbs on both sides.

Used EV guide: how to buy a second-hand electric car

It's an unfortunate fact that an increase in weight is beneficial to crash safety - especially in situations where a heavy vehicle is in collision with a lighter one (not so good for the occupants of the lighter vehicle though). And any increase in momentum with a heavier car is likely to be offset by a necessarily stiffer structure, so even impacts with stationary objects are unlikely to be worse.

Regarding fire, it's worth bearing in mind that even the highest capacity EV batteries only contain the equivalent energy of a couple of gallons of petrol - so if a fire does occur, it's likely to be less of a dangerous than a petrol fire. .

EVs certainly have problems to address, but I don't think crash safety is one of them.

It's an unfortunate fact that an increase in weight is beneficial to crash safety - especially in situations where a heavy vehicle is in collision with a lighter one (not so good for the occupants of the lighter vehicle though).

Total nonsense - just google the Fifth Gear video of a Volvo 940 crashing into a Renault Modus - the heavier car comes off worse.

"Whether a car is powered by a battery, petrol or diesel, the energy it stores is likely to be released in a major crash" Jesse - when it comes to fire diesel is a safer fuel than both petrol and electric because diesel needs either to be compressed or a wick to burn so it fires are much less likely, so not sure how youre suggesting that diesel vehicles would release their energy in a crash.

Under the skin: a crash course in making electric cars collision

Very scientific, C Class 1485kg Model 3 1611kg. So just how much will the death rate increase greatly (your words) by.    A percentage figure and outline study will do, maybe a ban of all cars weighing over 1600kg

Under the skin: a crash course in making electric cars collision