7
It fails to inject any more fun into EV driving, but the Bolt certainly makes the prospect of ownership a greater reality - albeit not in the UK
Open gallery
Close

General Motors infamously killed its first electric car, the EV1, having realised that America in the mid-1990s was not ready for an electron-fuelled future. Two decades on, the Chevrolet Bolt arrives not as atonement for the entirely rational decision to euthanise its forebear, but rather as an acknowledgement that the world has changed.

It’s a change that the Bolt is leading. No, it doesn’t entirely answer the criticisms most commonly levelled at EVs – that they cost too much and can’t go far enough on a charge. But it moves the goalposts on both of them. In the US, the Bolt costs just under $30,000 (£24,350 at current exchange rates) once a $7500 federal tax credit is applied against it. That’s cheaper than the BMW i3 but more expensive than the Nissan Leaf, yet the Chevrolet offers a huge increase in range compared with either – with an official EPA rating of 238 miles. That’s pretty much identical to the basic Tesla Model S 90, which is twice as expensive. 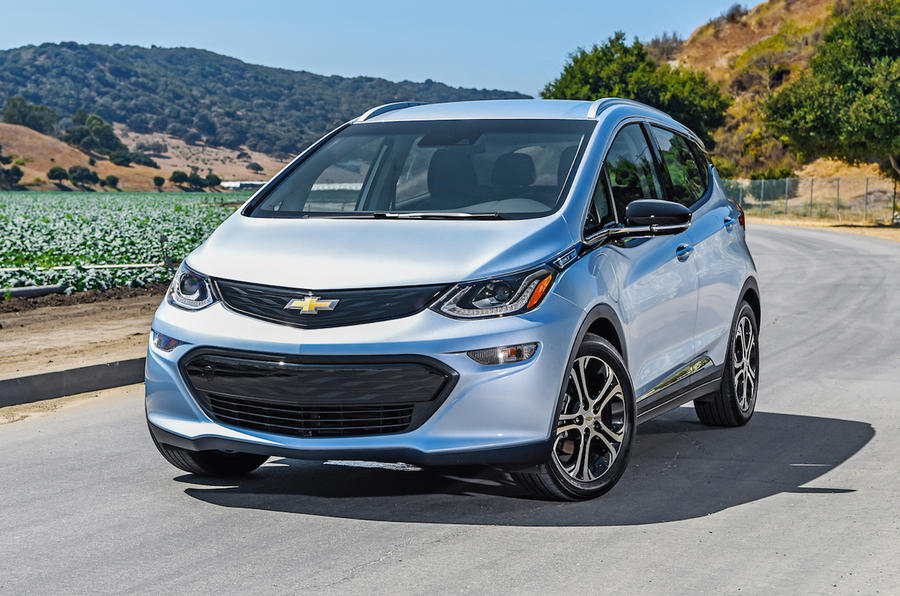 The Bolt uses an all-new battery pack, developed by GM and made alongside the electric drivetrain by LG Chem in Korea. The 288-cell pack holds an impressive 60kWh of charge, sits under the floor of the car and weighs 436kg on GM’s figures, while also serving as a stressed structural member. Drive comes from a single 149kW (197bhp) electric motor that features an integrated reduction gear and turns the front wheels.

Let’s start with the number that’s likely to receive the greatest scrutiny: the 238-mile range claim. The US Environmental Protection Agency test is meant to replicate real-world driving, and US media have managed to beat the official number under gentle real-world use. We didn’t get to run through a whole charge, but my time with the Bolt confirmed it’s possible to drive it impressively hard without melting the predicted range.

On our experience, and with the proviso that testing took place in generally warm ambient temperatures, the Bolt can be driven enthusiastically and will still manage more than 150 miles on a full battery. Only higher-speed cruising really gobbles charge, with the Bolt being limited to 93mph. It’s quick, too – fast enough to make the Leaf look like a golf kart.

Chevrolet’s claim of a 6.5sec 0-60mph time feels, if anything, conservative. As with most EVs, the motor gives its peak 266lb ft torque output from rest, and a keen start will chirp the front tyres. The throttle pedal makes it easy to modulate speed, and the transmission can be switched to a more aggressive 'L' mode that delivers maximum regeneration whenever you lift off, allowing the car to be driven most of the time using only the throttle pedal. Under hard acceleration, there’s a not-unpleasant electrical whining noise, reminiscent of the sound of an Underground train under power, but apart from that, refinement is excellent. 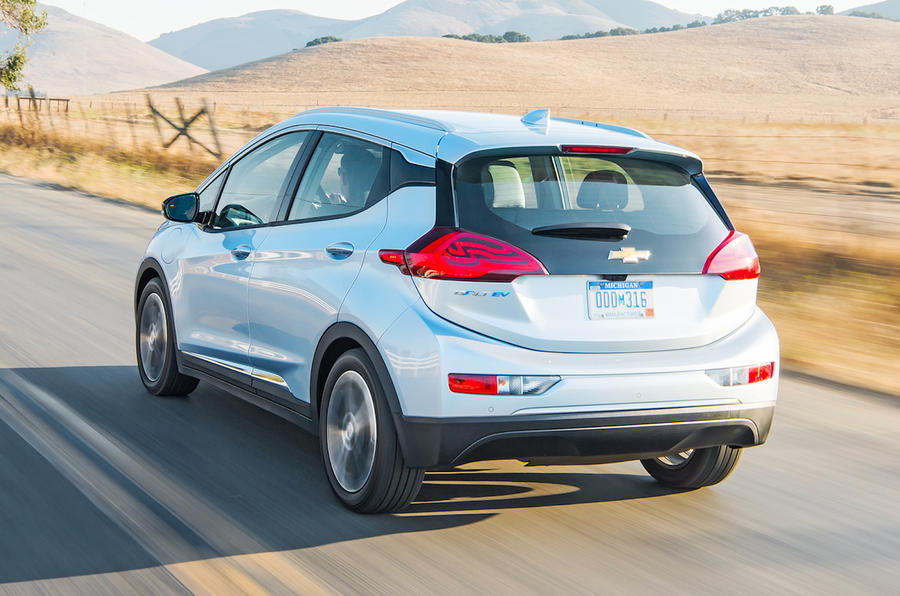 Handling is competent but lacks any real engagement, with no real sensation getting past the low gearing and springy-feeling power assistance of the steering. The Bolt’s suspension does a good job of keeping its considerable mass in check on everything but the roughest roads, but you feel the car’s 1624kg weight when asking it to change direction quickly. Michelin eco tyres have been chosen for low rolling resistance rather than outright cornering power and the lateral limits are low, with excess speed generating copious understeer. As such, it’s a typical EV, and we suspect few buyers will object – but it would have been nice to find some enthusiasm for more spirited progress.

The cabin features various familiar bits of GM switchgear and has materials that seem to have been selected for toughness and durability rather than upmarket vibes. (GM has disclosed that it is spending $8700 on each battery pack, so it’s small wonder that savings are being made elsewhere.) There’s a TFT instrument cluster that displays both minimum and maximum projected range numbers, depending on how the car is being driven. The central 10.2in touchscreen works well and has been given a redesigned interface to distinguish it from the other GM North American offerings that share the same system. 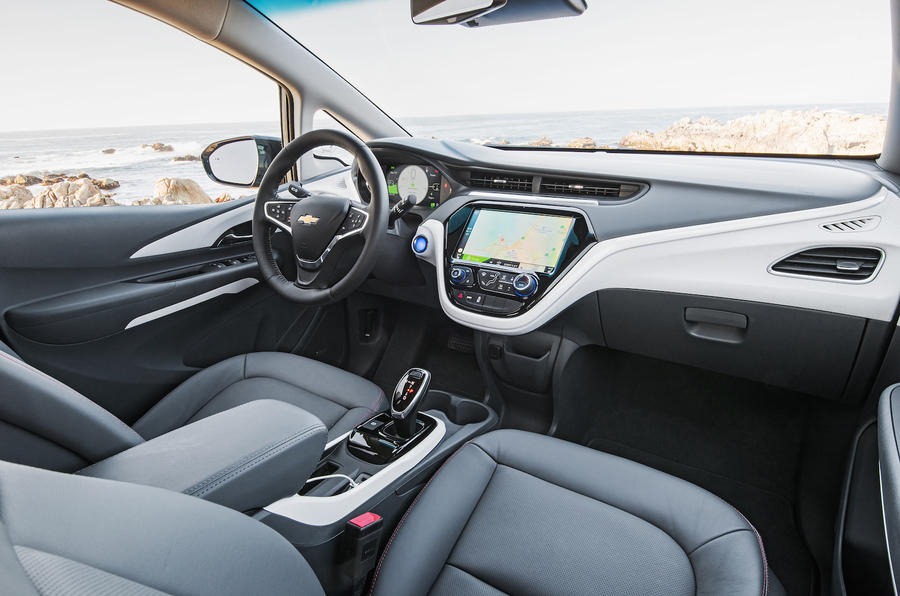 The only sizeable disappointment is with the Bolt’s styling; to European eyes, it looks like a slightly blinged-up version of a Meriva. We know the same battery pack and powertrain will underpin various other models; it’s surprising that GM didn’t choose to offer it as a more desirable crossover first. It’s bigger inside than it looks, with decent room for rear seat occupants (although with a roofline that taller passengers will find too low) and a decent 481-litre boot capacity on US testing methodology.

The size of the battery pack does knock recharging times, with Chevrolet saying it will take 10 hours to replenish it from empty using a 240V, 32A ‘Level 2’ charger. A fast charging port is being sold as an optional extra; that will be able to add around 90 miles of range in 30 minutes of charging from a compatible outlet.

There's a problem here, one that effectively negates GM’s claim to have created an EV for the world. Opel will be bringing a version of the Bolt to Europe, rebranded as the Ampera-E, but there won’t be any right-hand drive production. It’s difficult not to see this decision as being a major own goal, given that it in effect excludes a third of the world from experiencing this extremely promising car.

That’s a huge shame for British buyers who have been waiting for an electric car that can beat the meagre range of existing offerings. Here’s hoping GM brings us the technology in another form soon.

It'd be okay as a small petrol car

There isn't much perspective in the pictures to judge its size. If it's roughly similar to an Aygo or Up then it's not the worst looking little car I've ever seen, inside or out. Reading the piece though, it seems to be compared to a Meriva, and I think it would represent rather less successful a design at that size.

Either way, the obvious drawback is the silly electric engine, which should be scrapped forthwith. Electric cars are going nowhere.

Make it Aygo sized, deepening the rear side windows, with a decent petrol engine, hybrid if they must, but definitely not for plugging in to a mains socket, and there is some promise in the design.

How do you know? Are you guys just guessing?

Yes, it will be interesting

Yes, it will be interesting to see how the government taxes electric cars. Maybe they will mandate that every electrical outlet beyond a certain power output for public use must be a smart charger / outlet that can report the power used to the electricity providers automatically and seperately from your main bill so it can be taxed at a different rate.
The Apprentice 21 November 2016

Yes, it will be interesting to see how the government taxes electric cars. Maybe they will mandate that every electrical outlet beyond a certain power output for public use must be a smart charger / outlet that can report the power used to the electricity providers automatically and seperately from your main bill so it can be taxed at a different rate.

For now they seem content with ramping up the company car tax rates quite rapidly, and are also considering building an element of range into the scale so 'tax dodger' hybrids with just enough range for a good official CO2 are made unattractive and manufacturers encouraged to fit bigger batteries to them. I personally think its a good move. A plug in hybrid with an engine giving ultimately unlimited range but able to do 70 miles on battery would cover the vast amount of journeys and commutes there and back.. bring it on..