BACK TO ALL NEWS
Currently reading: How Volvo is using gaming technology to make safer cars
UP NEXT
Lion's pride: Peugeot 508 PSE vs BMW and Volvo rivals

How Volvo is using gaming technology to make safer cars

Volvo is borrowing hardware and development tools from the games world as part of a new research project aimed at improving autonomous driving safety.

The company is using a combination of virtual reality hardware and Unity real-time rendering software in drivable test rigs, which are being deployed on closed test tracks to safely simulate real-world driving scenarios.

The new project is an extension of a partnership between Volvo and Finnish virtual reality hardware experts Varjo, which last year became the first to make it possible to drive a real car while wearing a mixed reality headset. It uses a high-resolution display and cameras to deliver a near-lifelike image, while visual latency has been lowered to single-digit miliseconds to eliminate motion sickness.

Now the researchers have added a full-body haptic suit, which allows for accurate motion tracking, as well as the ability to tense the users' muscles against their will, replicating the experience of an emergency stop or seatbelt pre-tensioner.

The hardware has been installed in a fleet of XC90 SUVs, as well as in stationary simulators at the company's Open Innovation Arena. While in the real car, the headset is able to overlay virtual images on top of the real world – for example, simulating a moose crossing the road, or replacing the car interior with that of a completely different model. 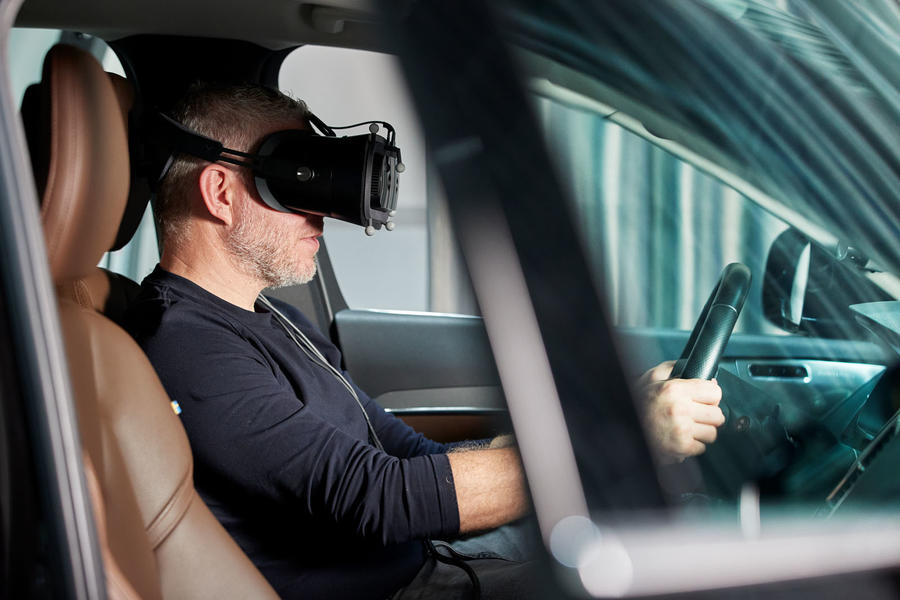 Several team members have a games industry background and the open nature of the Unity game engine allows digital assets to be purchased and re-used for many different scenarios in a way that dramatically lowers the cost of testing compared with real-world simulations. It also lets the researchers make real-time adjustments, which makes testing different variables far easier than in the real world.

“Working together with great companies such as Varjo, Unity and Teslasuit has allowed us to test so many scenarios that look and feel totally real, without having to physically build anything,” Casper Wickman, senior leader of user experience, said. “It lets us test drive actual cars in traffic scenarios that look and feel real but can be adjusted at the touch of a button.”

The project is currently in the research stage and has yet to produce findings that will be used in future production Volvo cars.

While currently focused on collision avoidance and experimenting with how to hand back control to the driver after enabling autonomous driving modes, the team envisions many different uses for the technology.

"Right now, it's heavily used in design, and remote collaboration, which lets us connect with other offices," Ghiurau said. "We're looking a lot into augmented reality for virtual test drives, customers configuring their cars. What does the future of the showroom look like? We see huge potential there."

With all these advances in car tech which will enable the car, Bus, Truck etc to drive themselves, what are all the ex commercial drivers who deliver stuff for instance going to do to fill in there spare time?more automation means less need for human involvement.

The race for automation just seems to be progress for the sake of progress. What will be the impact upon those of us who didn't choose jobs that can only be done by humans? I suppose the answer is 'evolve, or die'. Not a pleasing sentiment, but that's just my own opinion.