BACK TO ALL NEWS
Currently reading: Audi starts testing next-generation A5 coupe
UP NEXT
Nissan will build batteries in UK to sustain Sunderland plant

New engines and styling for second-gen A5, which will take on rivals from Mercedes and BMW when it goes on sale in 2016
Share
Open gallery
Close
Share story

This is our first look at Audi's next-generation A5 coupé, which will launch one year after the all-new A4 saloon comes to market in late 2015.

While this early test mule wears bodywork from the current car, it is understood to be testing chassis components for the new model. Like the new A4, the next A5 will be based on Volkswagen Group's second-generation MLB platform.

Engines for the new model should also be shared with the A4. That means a range of longitudinally-mounted 1.4, 1.8 and 2.0-litre TFSI units will feature alongside 1.6 and 2.0-litre diesels.

At least some of the petrol options will also get cylinder shut-down technology, with CO2 emissions of less than 100g/km also probable from one or more models - both moves are part of an increased drive for efficiency from Audi.

A plug-in hybrid model is also planned, using the same 1.4-litre, 148bhp petrol-electric powertrain as the A3 e-tron. A diesel-electric option is also in development. Like the A4, transmission options should include six-speed manual and nine-speed automatics. Both front- and four-wheel drive variants will be offered.

The A5 coupé is set to be one of a number of new variants to be launched following the 2015 A4 saloon, with successors to the current A5 cabriolet and Sportback models likely to appear after.

Inside, Audi will likely continue to use its more recent cabin architecture, and the new A5 could come equipped with the same all-digital instrument cluster and infotainment interface as the third-generation TT. Expect a heads-up display to be offered, too.

As with the current car, expect a new go-faster RS5 version to arrive soon after the standard A5 goes on sale in 2016. 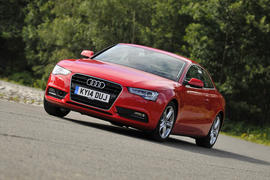 There's not many cars around

There's not many cars around that can be in production for 9 years and still look as fresh as newer generations of the same class. But I think the A5 won't look much behind the competition before the new model arrives.
disco.stu 21 August 2014

Interesting that the A5 will have to soldier on for a year after the A4 launches, given that the current car launched over 6 months before the A4. I guess it is a more conventional model cycle to launch the saloon/estate first, but it will mean the A5 will have been in production for 9 years.