BACK TO ALL NEWS
Currently reading: Detroit reveal for 2014 BMW M3 and M4
UP NEXT
The next Hamilton? Autocar meets F1 prodigy George Russell

The forthcoming 2014 BMW M3 and M4 performance models will be previewed by a concept due to appear at the Pebble Beach show in California next month. The premiere of the production models will follow at next year's Detroit motor show.

Both models will be powered by a 3.0-litre six-cylinder engine with twin scroll turbochargers. The engine is likely to be a significantly modified version of the TwinPower unit found in the 335i and 435i, although a BMW spokesman confirmed a bespoke engine is still possible.

Both the F30 M3 and F32 M4 will make extensive use of carbonfibre, and will use the material for the roof in order to lower the car’s centre of gravity. The F32 4-series already has the lowest centre of gravity of any BMW.

The styling will be an evolution of the M-Performance Line, which was previewed last week. A BMW spokesman said the M3 and M4 would have a more “aggressive” look.

A convertible version of the M4 is slated for production, although BMW has ruled out an M3 Touring variant.

BMW said there was a desire for four-wheel drive versions of the M3 and M4, particularly in the North American snow belt. The 3-series and 4-series have been engineered to accept a four-wheel drive system, so the development of such models would be reasonably straightforward.

Our source also revealed there is an appetite to build a limited-run performance car along the lines of the 1-series M coupé. The car is likely to become the M2, a car based on the 2-series – the forthcoming two-door variant of the 1-series. 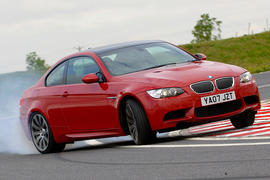 how likely is that to happen exactly - if the city is in bankruptcy protecton (appeals permitting) theres no way in hell the cost of staging a show would ever be permissible under those circumstances.

How about the A4M? get in

How about the A4M? get in there before the A4 is upgraded to motorway.

I never understand that

I never understand that comment Orangewheels..... I assume you mean unlike the M3,M5,M6...... last i checked all these are motorways as well?! so is the M1!

I never understand that comment Orangewheels..... I assume you mean unlike the M3,M5,M6...... last i checked all these are motorways as well?! so is the M1!

I know  - it sounds weird, guess it's just ingrained into my brain that the M3 is a car and the M4 is a shocking motorway.