Peugeot has shown a European-specification version of its Exalt concept car at the Paris motor show.

The French manufacturer has re-skinned the concept, which made its debut at the Beijing motor show earlier this year, with new grey colours and interior trim fashioned from recycled newspapers.

A new electric scooter concept, dubbed Hybrid kick, sits in the boot of the Exalt.

An evolution of the original Onyx concept of 2012, the Exalt features a part-bare steel exterior in conjunction with a material dubbed "shark skin" - which Peugeot says improves aerodynamic performance.

Powering the Exalt is a 1.6-litre four-cylinder THP engine with 266bhp, working in conjunction with a 67bhp electric motor mounted on the multi-link rear axle. Peugeot's Hybrid4 system automatically selects which driving mode to use - choosing from pure electric or pure petrol, plus hybrid options. Together, the Exalt's powertrain produces 335bhp.

Positive reaction to the original Exalt concept car in Beijing has lead Peugeot bosses to consider putting the car into production for the Chinese market. Company officials know that Peugeot needs a large saloon for China, making a production version of the Exalt likely.

Peugeot product boss Xavier Peugeot hasn't ruled out a future Exalt production car for Europe, either, saying: "We don't want to give up on saloons in Europe." 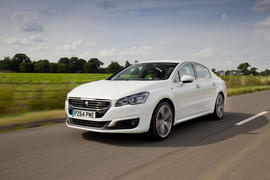 Dramatic design. But it will never see the road.
sirwiggum 4 September 2014

"We don't want to give up on

"We don't want to give up on saloons in Europe."

Please don't. I beg of you. I'm sick to the back teeth of these badly driven pseudo-SUVs (including Peugeot's own 3008 and 2008) that are popular with the car buyers these days.

We've already lost the Primera, Laguna (albeit a fastback hatch), Impreza, Legacy, Accord and likely the C5 (with the DS5 being the defacto replacement). Please don't let the big French saloon fade into history. At one point, Peugeot was the French Mercedes...