BACK TO ALL NEWS
Currently reading: Hyundai unveils downsized turbo engines and seven-speed transmission
UP NEXT
New 2021 BMW M5 CS sets records for pace and power

Hyundai has showcased two new turbocharged petrol direct injected (T-GDI) engines at the Paris motor show, including a 1.0-litre triple that will be installed in the new i20 next year.

The engines are 1.0-litre and 1.4-litre units which are part of a new generation of engines from the Korean company's Kappa family.

The smaller unit is a 998cc triple that's based on Hyundai's existing Kappa 1.0 litre MPI engine, albeit with various enhancements and new technologies, including direct petrol injection and a small, single-scroll turbocharger.

Developed at Hyundai's European Technical Centre in Rüsselsheim, Germany, can be tuned to produce up to 118bhp and 127lb ft of torque.

The new engine comes with an electronically controlled wastegate to optimise flow and improve low-end torque and throttle response.

The unit features a six-hole GDI injector, pressured to a higher-than-average 200 bar, securing a clean combustion and improving fuel economy and emissions to fulfil Euro 6 emission standards, three years ahead of their introduction in 2017.

It uses a split-cooling concept to manage different temperatures in the cylinder head and block area, cutting warm-up times and improving efficiency. To keep the engine unit as small as possible, the exhaust manifold is integrated within the cylinder head.

The second new engine is the Kappa 1.4-litre T-GDI unit, which is the successor to the Gamma 1.4-litre engine. At 87kg, the engine's base weight is 14kg less that the old motor, and the unit is also more compact.

On Hyundai's Paris show stand the engine has been installed in the new i30 CNG concept car, where it produces develops 115bhp and maximum torque of 152lb ft from 1500rpm to 3500rpm.

Hyundai has also displayed its first seven-speed dual-clutch transmission, which is also installed in the i30 CNG concept car.

The 7DCT consists of two dry clutches and an actuator for each clutch, with engine power transferred independently into the odd and even gear train, ensuring it is ready to shift into the next gear without any torque interruption.

For optimised responsiveness the electric motor-driven actuator is applied, while the external damper improve the noise vibration harshness during driving. 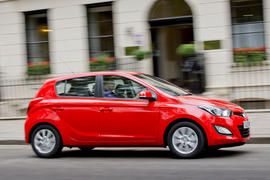