BACK TO ALL NEWS
Currently reading: Peugeot 308 GTi long-term test review: versatile hot hatch
UP NEXT
Lotus and Britishvolt to co-develop batteries for EV sports cars

With 266bhp under its belt, the 308 GTi can pack a punch, but it's comfortable around town, too
Open gallery
Close

My Peugeot 308 GTi arrived two months ago, and we’re already developing quite a bond.

Behind the wheel, it has more than proved itself as a daily driver. It’s perfectly sedate around town, despite its hot hatch capabilities. But I can’t deny that having 266bhp on tap is useful; the turbo spools up quickly to boost you away from the lights with an aggressiveness that always surprises those new to the car.

One recent example comes courtesy of an airport parking driver who, after delivering the car to me, eloquently volunteered: “It’s quick, isn’t it?” That’s not the most reassuring thing to hear, but there’s no doubting he’s right. Not only does it get away from a standstill swiftly, but with consistent torque throughout the range, you could also be forgiven for thinking there was an engine much bigger than the 1.6-litre unit that's under the bonnet. The six-speed manual ’box is good, too, even if it is missing the precision and crispness that you get in something sweeter and more delicate, such as a Mazda MX-5.

At cruising speeds, the GTi is more than comfortable, although those 19in ‘Carbone’ alloy wheels and wide tyres create quite a rumble on the motorway. It probably seems more pronounced because the 308 lulls you into a general sense of ease, in which it’s easy to forget you’re in a super-fast hatchback.

There’s little else to report on the driving impressions front but, so far, the 308 has impressed in the handling department, displaying little body roll and great grip in tight corners. Peugeot Sport seems to have managed to remove most of the body movement in corners and over bumps without making the ride feel harsh.

Inside, the cabin seems a little staid for a fast version of the 308, but its boringness is also its charm. This car is understated and largely high in quality, offering great performance without having to shout about it in its appearance. 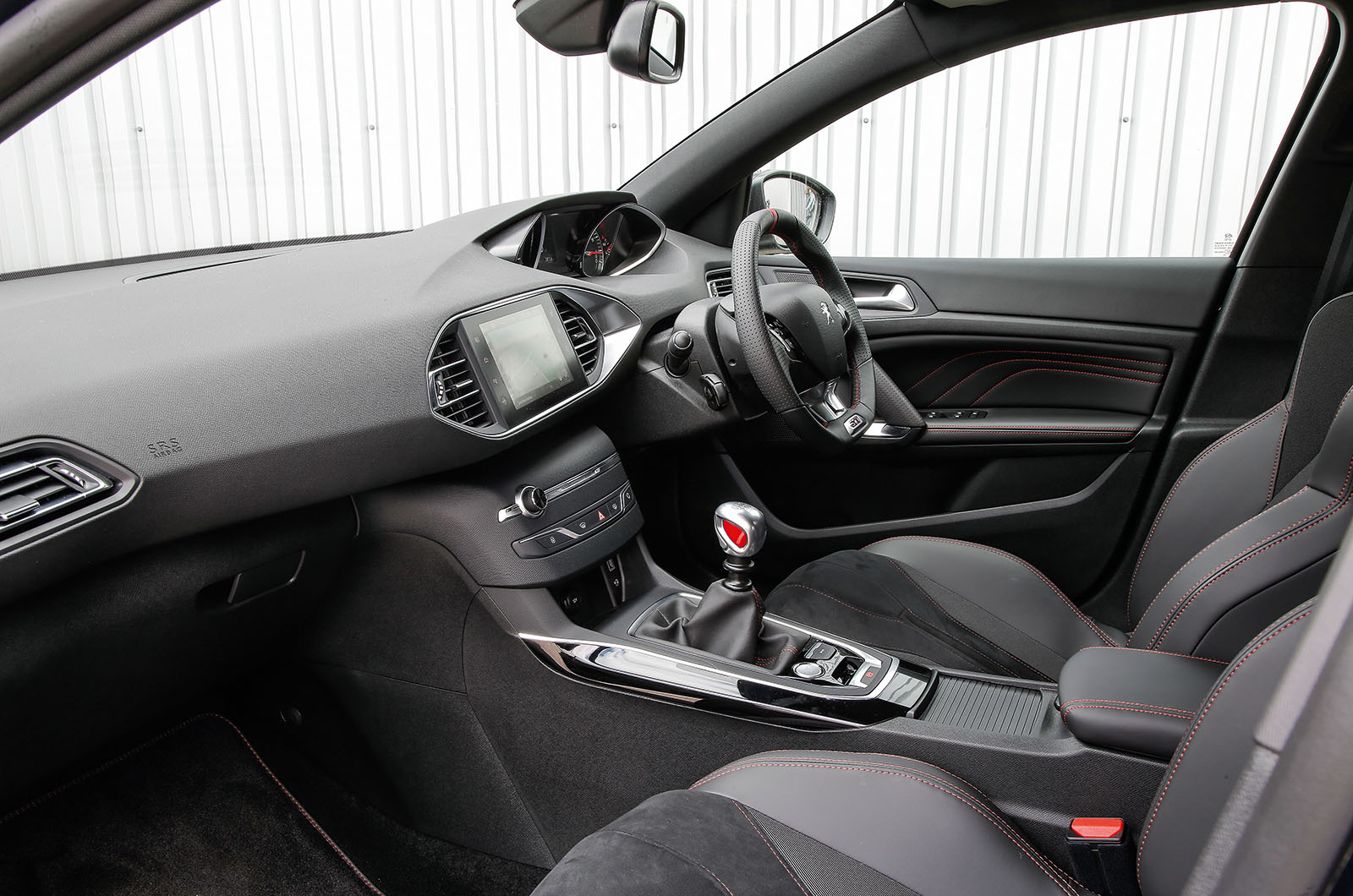 It’s a similar story outside. We opted for ‘Hurricane’ dark grey paint, which gets red trim on the lower front grille, and it all looks tidy enough. It also lacks the ‘look at me’ mentality of, say, the Coupé Franche option, which is undoubtedly cool but a bit in-yer-face for my everyday car.

As I mentioned in my first report, Peugeot’s dramatic step up in terms of interior quality and appearance for the 308 was a welcome arrival. It has done what many savvy manufacturers do and ensured all the touchpoint materials are good quality. But look closer and the plastics in those more hidden-away places don’t fare so well. Then there’s the infotainment system, almost solely controlled through the touchscreen. Here the irritation starts: reaction to touch has a delay, and working out how to program radio stations is far from intuitive. I’ve driven enough cars to consider that if I can’t work that out without a manual, it’s not as easy as it should be for anyone.

Couldn't agree more. I think part of the problem is automotive journalists never keep a car long enough to think about long term durability. I actually want hard plastics lower down as they're less likely to scratch or mark when they get kicked or knocked. I had a 2012 A3 for 6 months and despite all the reviews raving about its interior quality, it marked so easily it simply wasn't fit for daily life. My old Focus however shrugged of three years of hard use with barely a mark.
Scratch 13 June 2016

Interested in the piece from @androo about the Golf. Just checked mine and, yes, hard plastics on the rear door cards as he says. But the thing is, I had not noticed this (as an issue) in the two years I have had it. They look the same as the front, though, which is quite good enough in my book for this part of this type of car. They wipe clean easily, which is good too, as do lower areas in the front.
Herald 13 June 2016

I worked in Automotive manufacture for the best part of 20 years with a majority of the major OEM's. Perception of brands material quality was never more pronounced for me when I was purchasing a £18.50/ltr water-based poly prop bead based paint for Toyota Avensis and Corolla dashboards and a £4.20/ltr regular solvent based paint for Jaguars dashboards and air vents!! This was 10 years ago now but kind of proves the comments made here. This example was just one of many that stood out. Point being, well you'll get my point. I doubt very much if a VW materials quality would be superior to Peugeots.
View all comments (4)