Audi’s new high-performance seven-seat SUV hit the mark in our road test, but how will it handle the reality of family life? We’re about to find out
Share
Open gallery
Close
Share story

Forget the bells and whistles: our new Audi SQ7 is the full symphony.

A harmonic of soft hide, brushed metal, muted ambient lighting, brute power and high-end tech. Lavishly equipped as standard yet laden with more than £24,000 of extra kit, it’s plush and then some.

For starters on the ‘included’ list of our super-SUV, there is the wondrous 4.0-litre V8 diesel, complete with three blowers. Yup, three. But you probably know that since we talked all about it in the Autocar road test, where it got 4.5 stars. I won’t dwell on it long here. Suffice to say that in the brief time I’ve had the car, the stupidly potent ocean of torque and the menacing burble from the exhausts are things of which I will never, ever tire. I’m also impressed at how well the car rides on the standard adaptive air suspension, even on the optional (£500) Tornado 21in alloy wheels. It’s not only the mechanical bits that are impressive as standard. Also thrown in is the full-fat sat-nav and multimedia system, digital dials, electrically adjustable and heated front seats, four-zone climate control, LED headlights, all-round parking sensors, a reversing camera, automatic lights and wipers, powered bootlid, keyless go… you get the picture. Frankly, it’s an achievement to have found more than £24,000 of equipment that can be added to a car as generously equipped as the SQ7, but that’s what has been achieved here, and we’re hardly complaining.

If I were to actually dwell in detail on all the options, we’d be here for the entire six-month duration of the car’s loan. So we’ll address the highlights now and touch more on the rest throughout the Audi’s stay. 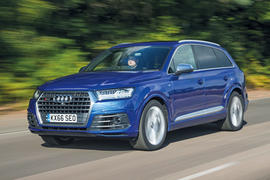 The most expensive extra is the £5700 Driving Dynamics Sports Pack. All-wheel steering, sports differential and active anti-roll bars are all to be found in this pack and – again, read more in the road test – it certainly works.

A panoramic sunroof – always a popular addition in this class of car – comes in at £1700. To further keep the kids happy, two removable tablet screens adorn the back of the front seats (called Audi Entertainment Mobile and priced at £1180), while a Bose 3D sound system (£1100) takes the SQ7 a step closer to being a mobile music and entertainment magnum opus. Something called an Audi Phone Box – not, in fact, a phone box – will wirelessly charge your phone, should your phone be newfangled enough. That costs £450. Giving the SQ7 the ability to steer itself into parking spaces costs £1500 and having a key that can tell the car who’s driving and activate their saved seating position is £950.

Tick the £1705 Tour Pack box and the car gains mystical, preemptive skills. The big Audi will autonomously stop and crawl in time with sluggish traffic, automatically stop from 19mph if it senses a collision and even apply steering force to try to point the car away from the potential accident if a suitable escape route is spotted by the allseeing radar eye. You also have to add this package option if you want the relevant speed limit beamed onto your dashboard. That seems a shame, because some buyers might want the traffic sign recognition without all the rest of it.

This autonomous driving technology has made a dramatic leap forwards of late. Only a couple of years ago, I was adamant that most of it was more interference than assistance. Then I drove the new BMW 7 Series and Mercedes-Benz S-Class. Gone were the sometimes erratic braking responses and unsettling beeps, flashes and steering inputs, and in their place was a reliable, intuitive array of tech that genuinely took the stress out of mundane driving situations. The Audi has made just the same leap, so don’t discount this safety kit. These days, it’s actually useful and effective.

The Audi Matrix LED headlights are another remarkable feature. As with the autonomous driving features mentioned above, it seems to me that automatic high-beam headlights have gone in a very short period of time from being something verging on a dangerous pain in the proverbial to being utterly superb. Audi’s set-up (£950 on the SQ7) is the best I’ve experienced. It’s genuinely extraordinary to see it in action (you can watch the lights shadowing oncoming traffic from the dazzlingly bright lights) and I’ve already come to appreciate it as the days get shorter.

It’s not unreasonable to mention the S-Class and 7 Series in our introduction to the SQ7. These days, upmarket SUVs often tread in much the same buyer demographic as luxury limos, and I have an inkling that the Audi is a more worthy adversary to those ‘proper’ luxury cruisers than any SUV apart from the Range Rover. So this is something we’ll investigate during the rather enviable task of running the SQ7. We know it drives well, but does it live well? Does it live up to the price and the world-class luxury metal that you could also have for your mountain of cash? On top of that, there’s the family question. It seems pretty obvious that a seven-seater of this size will be ideal for any family purposes, but it’s amazing how hefting baby seats and buggies in and out of a car every day can reveal all manner of weird niggles and flaws in a car’s packaging.

In short, to fulfil its brief, the SQ7 needs to be an ideal combination of family runabout, sports SUV and luxury car, with little or no compromise on any of those roles. Only mileage and real-world use will tell how well it truly covers that broad-ranging remit, but if you’ll forgive the vaguely sickening smugness here, I’m already pretty sure that daily use of our big, posh Audi is going to be no chore at all.

16 February 2017
It could be a new game for the kids whilst on holiday. I've got the Trailer Pack £1300. I suppose if you gonna have one and want to spend £70,000 you've at least got a V8 to distract you. Otherwise I'd go for a cheap Skoda/Seat/Renault so when 5 kids destroy it you won't feel like killing them quite so soon

'Ideal for any family

16 February 2017
'Ideal for any family purposes.' A £95k, 5m long, 2.2 tonne, triple turbo V8 SUV? Have you lost all hold on reality now? It is quite astonishing how people can justify any indulgence these days - such as a car like this for a suburban family with a couple of pre-school kids. Seriously - buy something more appropriate, and if you have the spare cash invest in a cherished car that you can enjoy now and sell later to use for the kids' college fund.

16 February 2017
Whilst I like the fact that this car has been engineered and exists it is crazy that most will spend their time in urban environments taking 2 or 3 kids to school. Which a 3.5m long Peugeot 108 can do equally well (and fit a buggy in the boot as well!). We need to opitimise the space in our cities and towns so if 7 people are in it fine - but I'd like to see the data on occupancy rates in use!

16 February 2017
[quote=jamesf1]is spending 95k on a diesel that will be taxed heavily and legislated against in the next couple of yeears[/quote] No the "real" lunacy is spending twice as much for the same car, only uglier, with only 5 seats and "B" on the bonnet.

16 February 2017
The above and £100000 of extras would be a riot and give everyone else a good laugh.Total cost£200k depreciation £150k over 3 years.To spend even £25k on extras is madness I know if you are a billionaire £50k onextras is accpted on a Rolls Royce etc but even they would not waste it on thi scar,a bit extra you will be in to Bentayga territory

Why can't people keep their mean little opinions to themselves?

16 February 2017
If people want these and can afford them, why shouldn't they have them and why should they conform to other people's prejudiced views of what constitutes 'sensible' and 'rational'? Once the money is spent it percolates back into the economy in the form of cash and taxes for the benefit of everyone else. The technology employed at these rarefied levels, once perfected, soon becomes cheaper and trickles down so that others can afford it: just look at the stuff in the new Ford Fiesta Vignale.

Why can't people keep their mean little opinions to themselves?

16 February 2017
Yea it's like someone posting "I bet there were some sweeteners somewhere along the line...." only 9 days ago when McLaren decided to build a factory and create jobs in the North. Hold on a minute it was you BEECHIE on the 9th of Feb!

16 February 2017
Hi beechie. I get angry because we all have to share the same streets to park in where I live and if every family had one of these we halve our parking capacity (unless it really is for a family of 7 then fine!). If you never need to park on streets then fill your boots on an SQ7!