BACK TO ALL NEWS
Currently reading: Volkswagen ID: new images of electric hatch leak
UP NEXT
Spending 48 hours touring in a Ferrari Roma

Fresh images of the all-electric Volkswagen ID hatch, showing the car in a bold camouflage livery, have leaked online a day before reservations for the new machine open.

The images, which come from a leaked video and were captured by Elektrowoz, give one of the clearest looks yet at the production version of Volkswagen’s first ID machine built on its new MEB electric architecture.

They show that the ID hatch – which is tipped to be called the ID 3 when it goes into production – features lights similar to that seen on the Volkswagen Golf, but with a more rounded and shorter bonnet due to the car’s electric powertrain.

Read our first drive of the Volkswagen ID3 here

Volkswagen has also launched a website hub for the ID range, ahead of opening registrations for the car during an event tomorrow (8 May).

The MEB architecture can house a range of battery sizes, and it is understood the ID hatch will be offered with several choices, offering differing levels of range. According to the leaked information, it will be offered in a special Launch Edition with a maximum range of 341 miles. The entry level version will feature a 205-mile range, with other variants between those two.

The ID hatch is expected to be officially launched at the Frankfurt motor show later this year.

The first model from Volkswagen designed and purpose-built as an electric vehicle (EV), the Volkswagen Golf-sized ID will remain largely faithful to the 2016 concept, as the new images show.

The director of Volkswagen Design, Klaus Bischoff, previously told Autocar: “The proportions, the design cues and the wheel size are the same as the concept. It looks like the show car. We couldn’t do the camera-system rear-view mirrors for legal reasons, nor the electric door handles due to cost. But other than that, it’s pretty much the same.” 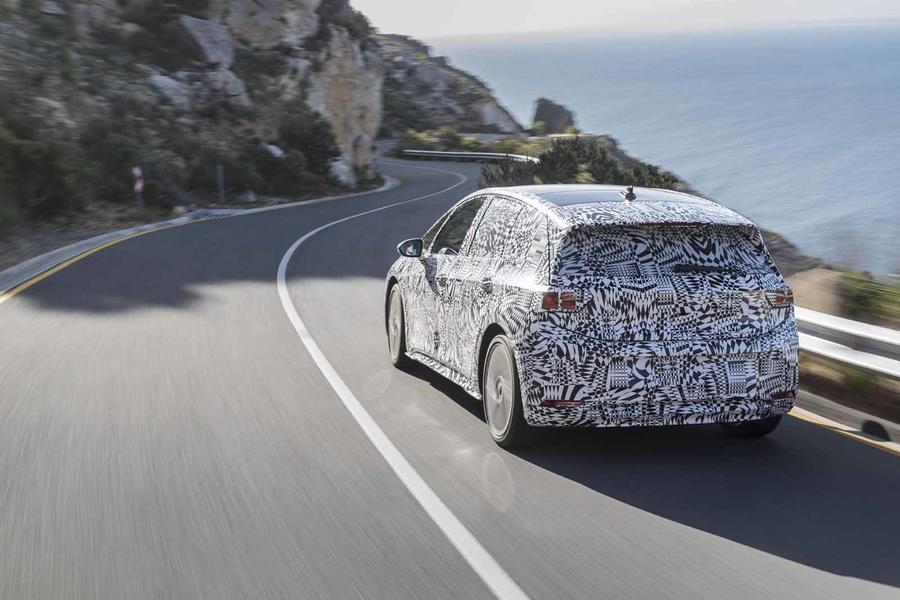 The first pre-production prototypes rolled off lines in April 2018, giving engineers a 16-month window in which to complete the car's development.

Volkswagen boss Herbert Diess revealed that these prototypes would also be used in an "intensive start-up phase", which started last September.

The first definitive examples of the ID are due to be produced in November 2019. Customer sales will kick off in Britain at the start of 2020 at what Diess said would be a price "comparable to a diesel model". 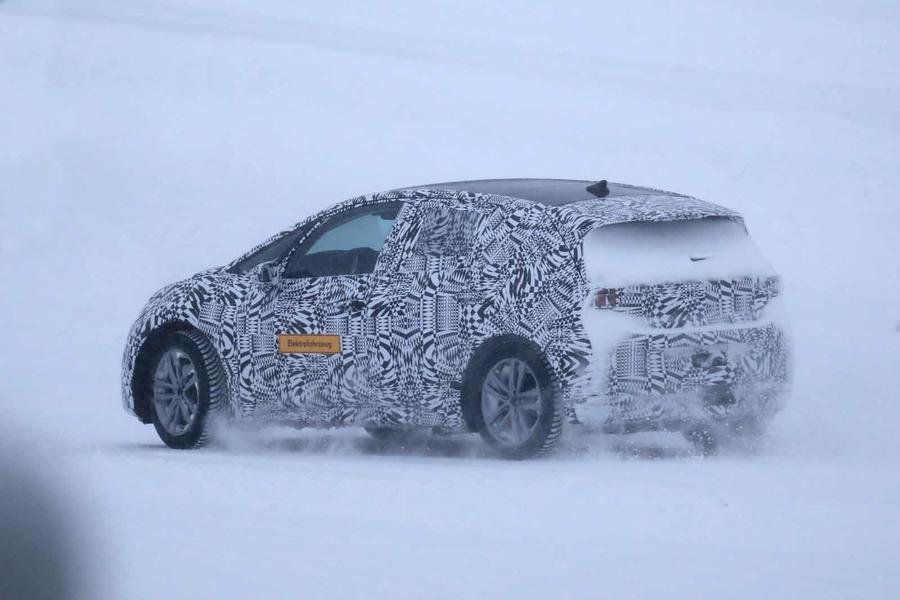 With an electric motor providing 168bhp, the ID is claimed to achieve a range of up to 373 miles, easily eclipsing the 186-mile range of the soon-to-be-discontinuedVolkswagen  e-Golf.

By packaging the motor at the rear, Volkswagen has freed up space within the front section of the car, endowing it with an impressively tight turning circle of just 9.9 metres and thus the promise of excellent manoeuvrability in urban environments.

The ID hatchback will be the first of five new electric models planned by Volkswagen, the others being the ID Crozz SUV, the ID Lounge luxury SUV, the ID Buzz microbus and a saloon. 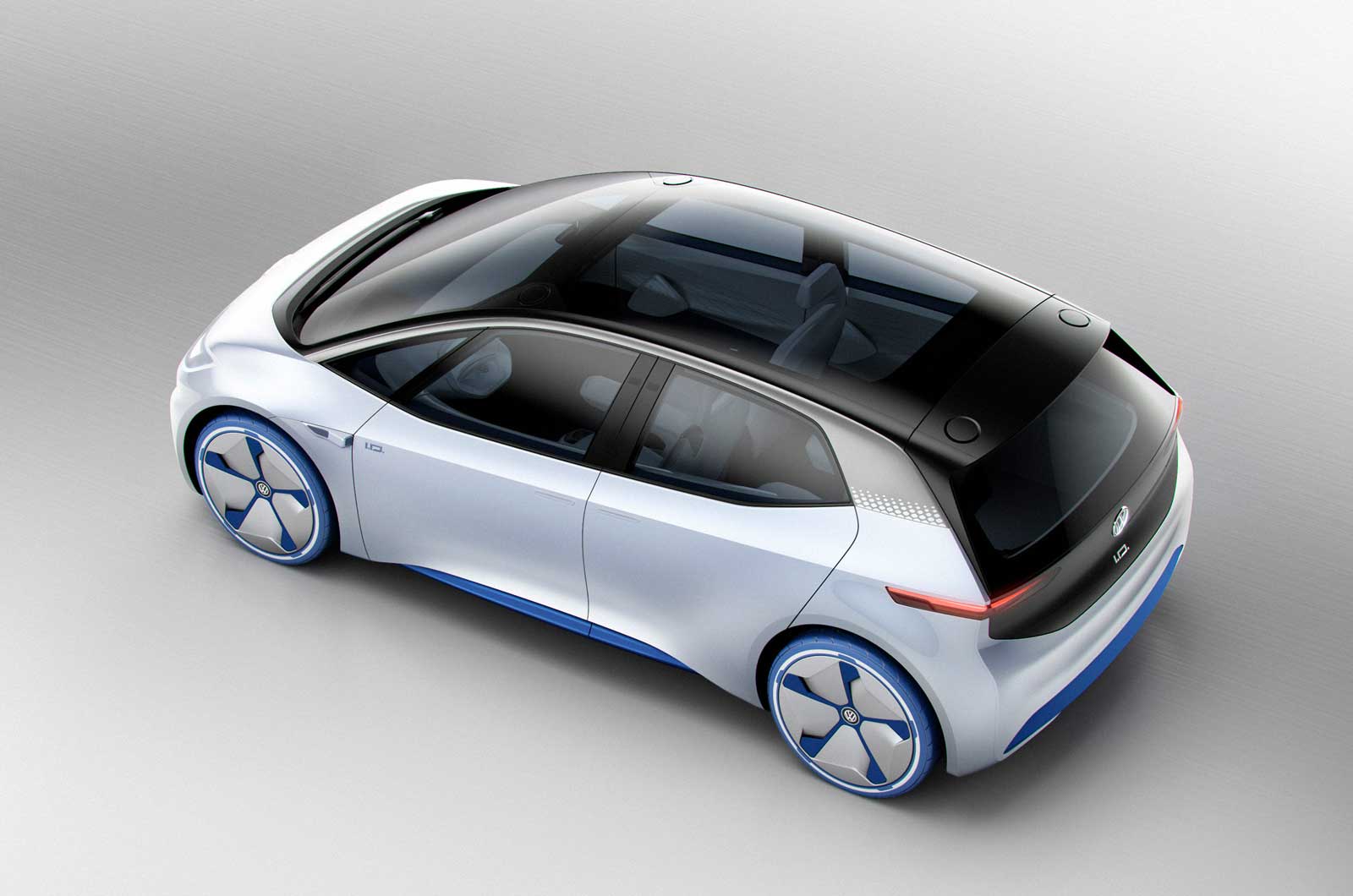 Built to showcase the design lineage, electric drive technology and modular platform architecture that are set to underpin Volkswagen’s EV offensive, the ID concept also provides an insight to the fully autonomous driving functions the company is developing for introduction on selected models from 2025 onwards. Among its more intriguing features is a multi-function steering wheel that stows away within the dashboard when the driver switches to autonomous driving mode via the VW emblem set within its boss.

Styled at Volkswagen’s main design studio in Wolfsburg, Germany, it has a highly contemporary appearance that's claimed to set the tone for all of the company’s new electric cars.

Bischoff said: “We had the unique chance to lead Volkswagen into a new age. Electric drive provides greater freedom for designers. We minimise the cooling holes; the axles move further apart and generate stunning proportions.”

With an illuminated badge that makes it easily identifiable as a Volkswagen, the ID departs quite radically from existing models. Key elements include a largely unadorned front end, an ultra-short front overhang, a steeply rising bonnet line, a heavily raked windscreen, 20in wheels, prominent sill elements, cantilever-style rear doors, an extended roofline, a rear spoiler element and a glass tailgate. 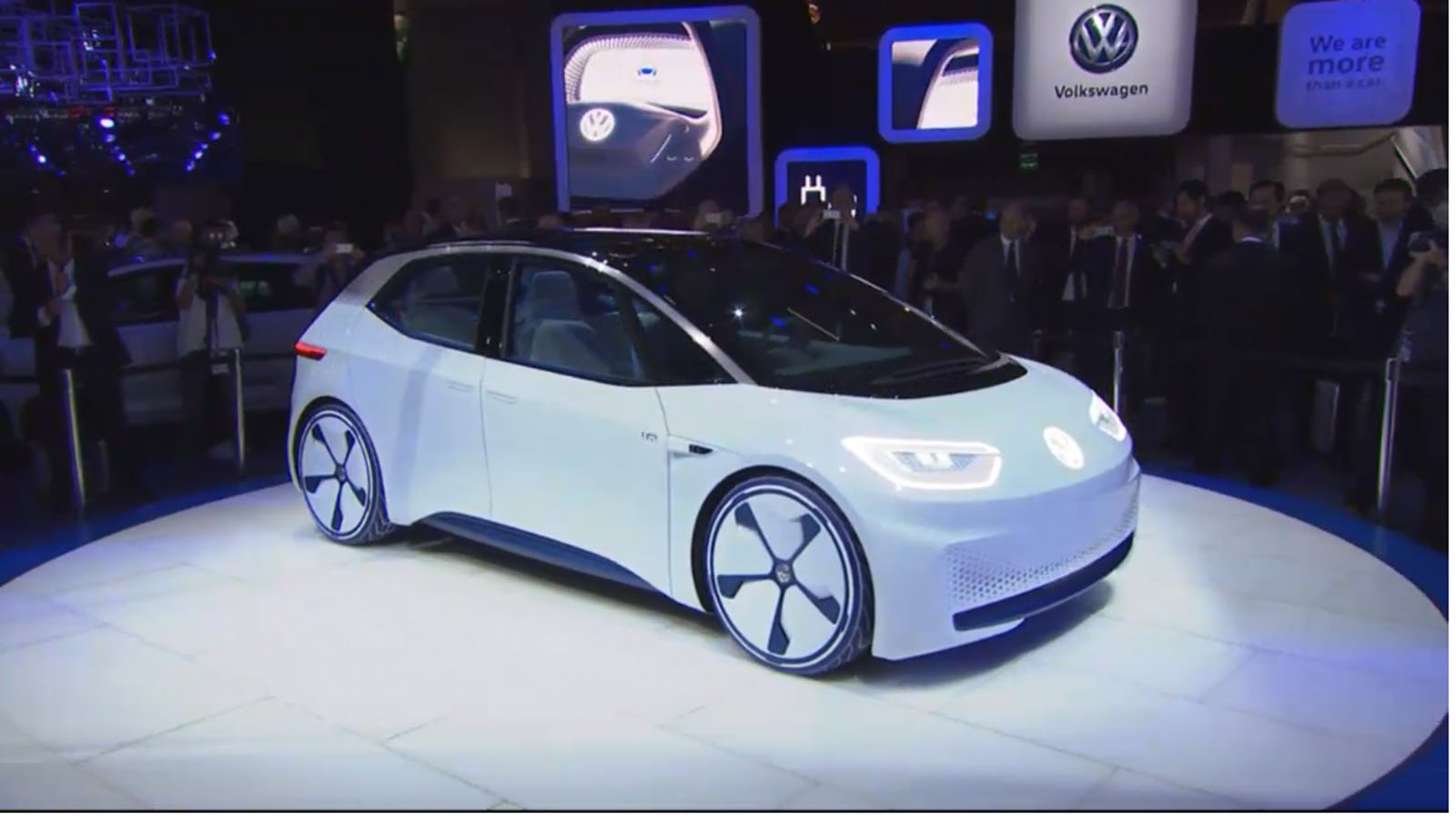 By eschewing a traditional grille, using flush-fitting glass for the side windows and extending the roofline beyond the top of the tailgate, Volkswagen’s designers have clearly attempted boost the aerodynamic efficiency of the ID.

With interactive LED headlights that have been conceived to mimic the action of a human eye by giving the impression of being able to open and close, as well as LED units concealed within various parts of the exterior, the lighting properties and overall visual character of the ID alters depending on the driving mode. 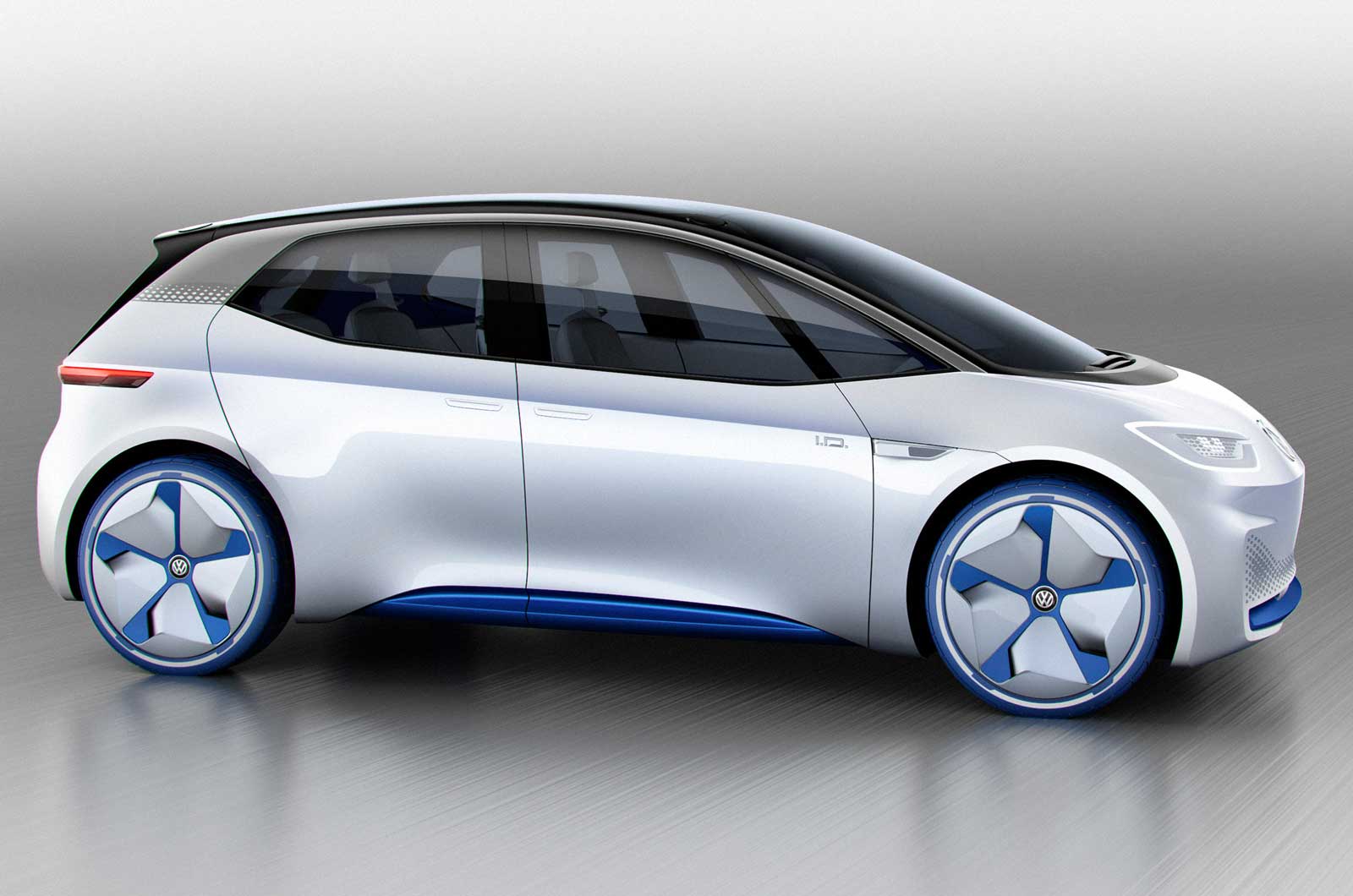 When parked, the headlight graphic is designed to provide an impression of a closed eye – as if to signal it is asleep. At start-up, the headlights blink and the graphic is altered to convey the action of an eye opening. At the same time, the VW logos front and rear are illuminated in white, while the lower section of the front bumper, side sills and rear diffuser are lit up in blue.

When 'drive' is selected, the LED daytime driving lights are automatically switched on and the VW logos remain lit in white. In autonomous driving mode, a laser scanner deploys from the roof and the front bumper, side sills and rear diffuser are once again illuminated in blue. During recharging, the LED units pulsate in a simulation of the flow of energy being provided to the battery.

Inside, Volkswagen has exploited the packaging advantages inherent in electric drivetrains to provide the ID with an impressively roomy four-seat interior offering accommodation similar to the larger Passat, as well as a comprehensive connectivity package that Volkswagen suggests will be part and parcel of all upcoming electric models.

"Before we took a pen in the hand for the ID project, we intensively discussed the importance of future mobility. One thing is certain: the car for the day after tomorrow will be a place of mobile communication. The open space offered by the ID is such a place,” said Bischoff. 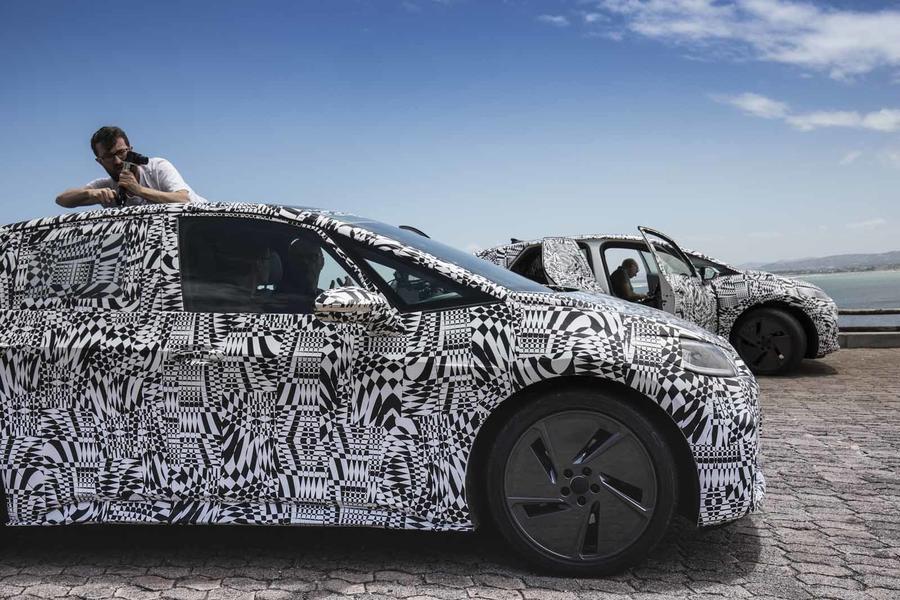 While the ID provides seating for four on individual seats, the production version will have a more conventional layout with space for up to five. Volkswagen hasn't revealed nominal boot capacity but says the concept offers up to 980 litres of luggage space when the rear seats are folded down.

Despite the ID's contemporary appearance, Volkswagen suggests the production version will rely on existing unibody construction techniques using a combination of hot-formed high-strength steel, aluminium and magnesium. This will allow the company to build it in existing factories without the need for significant investment in production infrastructure.

Providing the ID with zero-emissions capability is a 125kW brushless electric motor mounted within the rear axle housing. The in-house-developed unit drives the rear wheels via a fixed-ratio gearbox. Although Volkswagen has yet to hint at a kerb weight for the ID, computer simulations suggest the production version is set to achieve 0-62mph in less than 8.0sec, while top speed will be limited to 100mph. 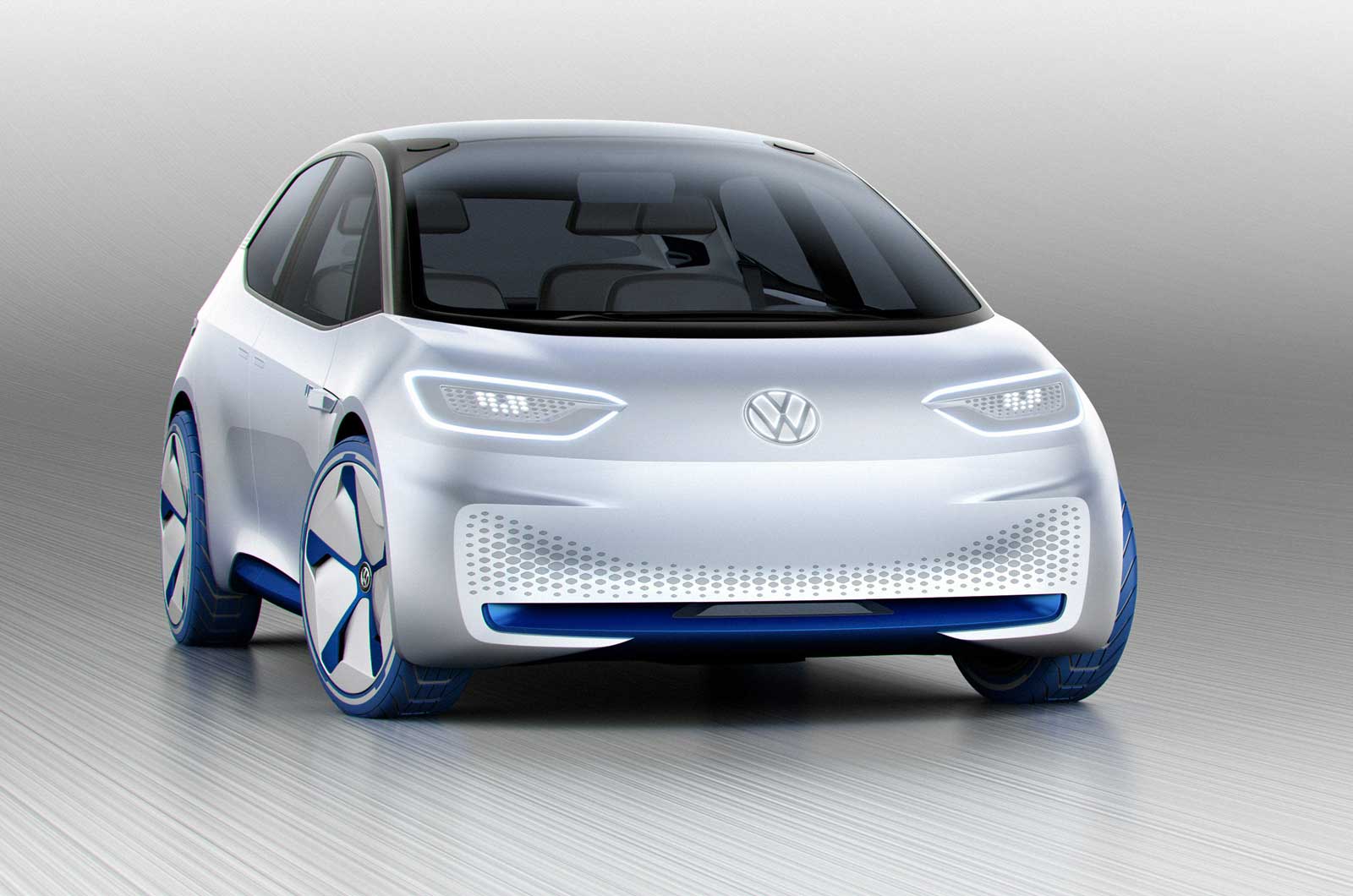 Energy used to drive the electric motor is drawn from a lithium ion battery mounted low down in the floor of the MEB platform, wholly within the wheelbase for the best possible weight distribution. Volkswagen has not yet confirmed the capacity of the pack, but Autocar sources say it will be produced in-house for the production model.

However, Volkswagen describes the battery used by the ID as being scalable and hints at differing capacities in each of its upcoming electric models, in much the same way that it offers differing power outputs in today’s combustion-engined models.

Little is being said about the charging system for the ID, although going on Volkswagen's claims that its battery can be recharged to 80% within half an hour, it appears the firm may be considering a 800V system similar to that employed by its sibling company Porsche on the Mission E concept revealed at the Frankfurt motor show in 2015.

Despite mounting the electric motor at the rear, Volkswagen says there is sufficient space to provide the ID with a multi-link rear-suspension similar to that used by the Golf. It's also key to endowing the new car with a weight distribution of 48:52 front-to-rear.

Volkswagen is targeting one million EV sales annually by 2025.

Volkswagen CEO: We will launch one electric car per month from 2022

Rapid chargers (LEAF owners get by)

I do over 30k miles a year and not once would I have needed a rapid charger last year, or even a not so rapid charger. For the people who do I'd suggest they buy a different car, unless they have access  to a ICE car in which case take that.

It's all about experience

I do 5,000 miles a year.  Went for a single 'long' distance journey of 200 miles and came across four broken chargers while trying to find one (meanwhile running out of juice) and finally found one with a Corsa parked in it.  A trickle charge would be no good - I wanted to get back home the same day.

Your experience is evidently different to mine.  I gave my leased EV back five months early, and won't be buying another (despite the huge saving in running costs I made) until they sort out putting rapid chargers in EVERY service station.

Great...all we need now is a

Great...all we need now is a huge number of rapid-charge points.  Oh...

Why is this news that’s it’s

So you have an idea of the shape and size of the car.