BACK TO ALL NEWS
Currently reading: Volkswagen Budd-e concept revealed at CES
UP NEXT
Volkswagen ID Buzz to kick-start wave of enthusiast-oriented EVs

The Volkswagen Budd-e concept has been revealed at the Consumer Electronics Show in Las Vegas, previewing an advanced new four-wheel-drive electrically powered MPV that's set to join the firm's production car line-up in 2018.

Described as a gateway to the future, the four-seat Budd-e forms the centrepiece of an ambitious electric car initiative instigated by chairman Matthias Müller in the aftermath of Volkswagen’s diesel emission cheating scandal.

The concept features the latest in lithium ion battery technology, providing a claimed zero-emission range of up to 331 miles on the European test cycle – a considerable 213 miles more than the German car maker claims for the existing e-Golf.

The Budd-e, which is seen as a spiritual successor to the original Microbus, is the first in a series of new electric production cars under development at Volkswagen’s Braunschweig-based R&D centre in Germany.

Other models include a successor to the Phaeton, as announced by Müller in October 2015 as part of plans to put the company back on track following the dieselgate scandal. 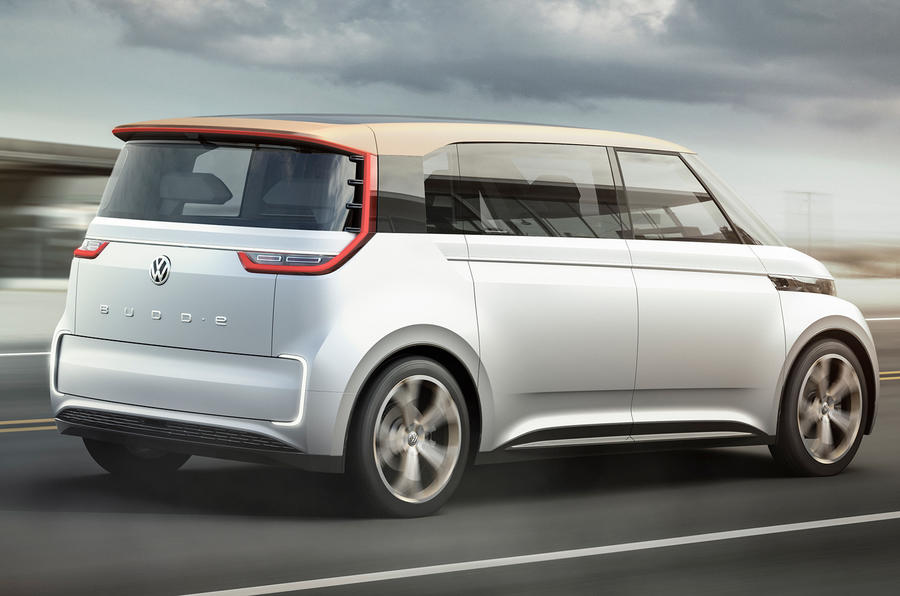 The Budd-e is 4597mm long, 1940mm wide and 1835mm high and is based around Volkswagen’s new MEB (modularen elektrisch baukasten, for modular electric drive kit) platform.

Planned to underpin a range of new dedicated electrically powered Volkswagen Group models, including the Porsche Mission E and Audi e-tron quattro, the new multi-material structure sites the new MPV’s sizeable 94.6kWh battery low down within the floor structure and wholly within its lengthy 3151mm wheelbase – a set-up claimed to provide Wolfsburg’s latest concept with an ultra-low centre of gravity.

The battery, which uses the latest chemical process to provide it with what Volkswagen describes as a "significant gain" in efficiency over the unit used in the VW Group’s existing electric car offerings, can be charged either by conventional plug-in means or via an inductive process. Volkswagen claims an 80% charge after 30min on a high powered 150kW system, which is sufficient to provide a range of up to 265 miles.

Power is provided by a pair of brushless electric motors, with one mounted up front underneath the short nose and another sited within the new car’s independent rear suspension. The former delivers 134bhp and 147lb ft, while the latter provides 168bhp and 214lb ft. All up, the Budd-e has combined system outputs of 302bhp and up to 361lb ft.

Each electric motor provides simultaneous direct drive to the front and rear wheels. Volkswagen claims 0-60mph in 6.9sec and a top speed of 112mph. 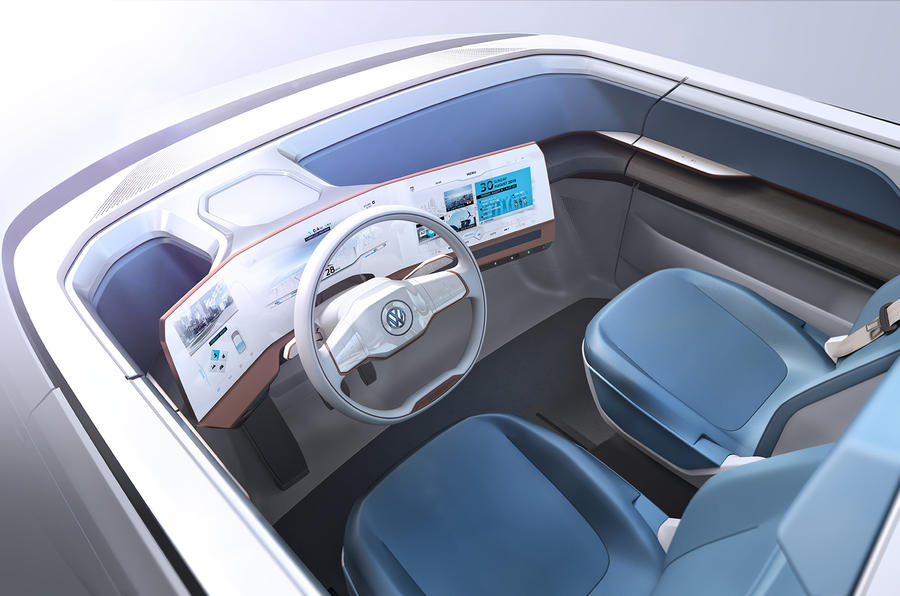 Stylistically, the Budd-e draws on the design of the earlier Bulli concept first wheeled out at the 2011 Geneva show, with a look not unlike that of the latest generation of Japanese kei-cars. Its boxy interior has been updated with a new corporate grille incorporating round headlights. Further distinguishing features include the C-shaped daytime driving lights, which Volkswagen already uses on the e-Up and e-Golf.

The upright glasshouse features a pillarless design with blacked-out pillars, while the roof houses a large solar panel used to provide additional energy storage. Entry to the interior is via a conventional front hinged door up front and a kerbside sliding door at the rear. The rear hatch-style door opens at bumper level.

Inside, the new Volkswagen receives a contemporary-looking dashboard with digital instruments and a large high-definition display for the internet-enabled infotainment functions. The individual front seats are combined with a wraparound lounge-style rear bench.

As well as showcasing Volkswagen’s post-dieselgate electric car plans, the Budd-e also provides a glimpse at the gesture-based control system and autonomous driving technology the company is pursuing for future production models, including a driverless parking function planned for introduction on a successor to the Touareg in 2017.

Speaking at Volkswagen's keynote speech at CES, company boss Dr. Herbert Diess said: "The original Microbus was the embodiment of peace, hope and happiness, an apartment on wheels. The future belongs to cars that make everyone happy. We want to create a new experience of mobility."

Volkswagen has also taken the wraps off its new e-Golf Touch concept, a car that the firm says offers a close look at its next generation of production infotainment systems. Based around a 9.2-inch touchscreen, the new system allows drivers to create a custom homepage, with driving and infotainment information displayed in 'tiles'. Top-end versions of the new system will also come with gesture controls.

The new system also features an improved voice command service and the ability to reply to smartphone notifications - for example from social media - while on the move.

VW says that, in the future, users will be able to save their custom dashboards and transfer them between vehicles.

Q&A with Volkmar Tanneberger, director of electrical and electronic development

Does the Budd-e’s battery use existing technology?

We designed the second generation of our battery technology for Budd-e. We talk about cells and cell modules, which means we stack up to 14 cells in one battery module. We then build up the battery system by stacking the battery modules.

This second generation can carry cylindric cells and pouch cells as well as traditional types. The dimension of the battery module is designed to cover different types of cells. We want to go with the technology which will offer us the best range.

Does VW intend to make its own battery cells?

We are having that discussion, and it depends on whether MEB becomes a successful platform, if it does we will require a significant volume of battery cells. It might make sense to produce battery cells by ourselves.

Is the MEB platform scalable?

Larger and smaller cars can be made on the same MEB platform. We have done A and B-segment cars and can go to C-segment or larger. All our electric engines for the MEB platform will be produced by Volkswagen itself. MEB can also be scaled for better performance, both in terms of engines and batteries.

Mamma mia! Ah ah ah, I have missed this one) I hope Volkswagen will abandon this Budd-e design, its more about TATA motors.. and not a great and serious Volkswagen! IMHO
Thinking Citizen 16 April 2016

If this model makes it to market in this form it would be an ideal platform for Uber Drivers!
spqr 7 January 2016

Just as VW tried to convince the world they were leaders in diesel engine technology they are now attempting the same trick with electric power.And Autocar are indulging VW just as they did with diesel. VW lied. Cleverly. I am surprised anyone with an ounce of sense would ever buy a VW product (including Audi/Skoda/Seat et al) again. if they lied about the NOx, CO2, MPG and BHP etc what else are they lying about? The US Dept of Justice law suit is a landmark in that the US EPA seems to be sending a message to the car industry, namely, nobody is safe or too big if lie and cheat on emissions. As I predicted a few weeks ago VW are now fully into the PHEV/electric PR campaign to convince everyone that that silly diesel thing isn't them any more. If the US EPA wins its case and make an example of VW the fines could wipe the company out. I have a suspicion that that is exactly what the EPA will try to do. (Re-posted due to typo)
View all comments (14)