BACK TO ALL NEWS
Currently reading: Volkswagen Up GTI relaunched in UK for 2020
UP NEXT
2021 Jaguar XF Sportbrake: facelift previewed in new images

Volkswagen Up GTI relaunched in UK for 2020

Volkswagen has relaunched the Up GTI hot city car in the UK, eight months after its production allocation was fulfilled and it was withdrawn to coincide with the transition to WLTP emissions testing.

The Suzuki Swift Sport rival’s return to the market comes as Volkswagen gears up to begin deliveries of the revised e-Up, which, unlike its new Seat Mii Electric and Skoda Citigo-e iV siblings, will be sold alongside petrol variants.

Given the Up GTI's relatively short time off sale, it returns largely visually unchanged, save for the addition of the redesigned Volkswagen logo and a new set of 17in alloy wheels with low-profile tyres. As before, the seats are trimmed in Jacara checked fabric, which first featured on the original Golf GTI, with a flat-bottomed steering wheel and GTI-badged gearstick further differentiating it from the rest of the Up range.

Power output from the transversely mounted turbocharged 1.0-litre three-cylinder engine remains 113bhp - nearly double that of the standard Up - and drive is still sent to the front wheels through a six-speed manual gearbox. The car achieves 53.3mpg on the WLTP combined cycle, emits 120g/km and remains capable of accelerating from 0-62mph in 8.8sec and on to 122mph.

The most significant change for prospective Up GTI buyers is a price increase from £13,750 to £15,895 before options, which represents an £3445 premium over the standard Up. Prices rise to £16,295 for the five-door variant.

Joining the Up GTI in showrooms will be a new Up R-Line, available from £14,280. This brings styling features inspired by Volkswagen's top-rung performance models, 16in black alloy wheels, black trim elements, lowered suspension and heated front seats.

There are changes further down the Up range as well, with added equipment on the £12,440 entry-level model now including 15in alloy wheels, a 5.0in infotainment display with smartphone compatability and a DAB radio. The 74bhp mid-range engine option has been discontinued, leaving just the 59bhp three-cylinder unit.

Starting from £13,125, the new White and Black special editions bring larger 16in alloy wheels with coloured highlights, as well as a colour-coded roof, wing mirror housings and dashboard. Unlike the standard Up and Up GTI, these models are available exclusively in five-door form.

All petrol versions of the Up are now available to order, while the electric e-Up is expected to go on sale in the coming months.

Autocar's plan to save the city car​ 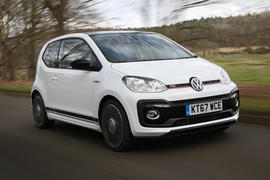 It won't fail, more's the pity.  It still represents good value at that price, was a bargain before.  All those who already have one lucky you, your used value has probably just gone up by a grand.

We had a 74bhp High-Up, great little car but frequently had to drop down to 2nd for a decent hill, that 59bhp one must be woeful - can't help but think they've dropped the wrong engine, especially given emissions and economy were similar.

It won't fail, more's the pity.  It still represents good value at that price, was a bargain before.  All those who already have one lucky you, your used value has probably just gone up by a grand.

We had a 74bhp High-Up, great little car but frequently had to drop down to 2nd for a decent hill, that 59bhp one must be woeful - can't help but think they've dropped the wrong engine, especially given emissions and economy were similar.

I had a 3 door High-Up which was gutless, on occasions,but I do have a hankering for an UP GTI although, to be honest, the price hike does feel excessive. The 3 door version is welcome, although we were told that nobody buys 3 door cars so they were being dropped by everyone. Perhaps the drop in showroom traffic demanded a quick re-think?

VW taking the p*** with that price hike!

If VW can still have petrol

9 January 2020
If VW can still have petrol ups why cant its sister cars have the same?
This is a massive price increase for the GTi, still pretty desirable though

Much smaller and much lighter than Bentayga Hybrid but consumes more fuel and is significantly slower to boot. :-)

Yes but the Bentayga doesn’t

9 January 2020
Yes but the Bentayga doesn’t have a fabulous new badge.

Yes but the Bentayga doesn’t have a fabulous new badge.

Yes but the UP! isn't hideously revolting.

I think I would rather spend

I think I would rather spend a tiny bit more and get a base Abarth 500. 145hp is a useful amount, where as 113 seems lukewarm.

9 January 2020
The increase in the cost of the new up seems to reflect the emissions penalty that city cars are especially badly penalised. I guess this will ease the transition of city cars to electric. Seems unfair and a perverse incentive for petrol cars to get bigger.