No mystery here. This is the Skoda version of the new Volkswagen e-Up, with a single 82bhp electric motor driving the front wheels directly and no need for a clutch or gearbox.

This simple powertrain’s peak torque, delivered from standstill, is an impressive 156lb ft, which is why the 0-62mph acceleration time is a respectable 12.3sec and the top speed is 80mph.

Range is the burning issue, of course. The e-Up used to run on a modest 18.7kW battery, for which its maker claimed a 99-mile range. But the new version and the newly electrified Citigo and Seat Mii have almost exactly double the battery capacity: 36.8kW, of which 32.3kW is usable. Yet their claimed range is only 161 miles, perhaps because we’ve moved into an era when such figures have to be more 'real world'. 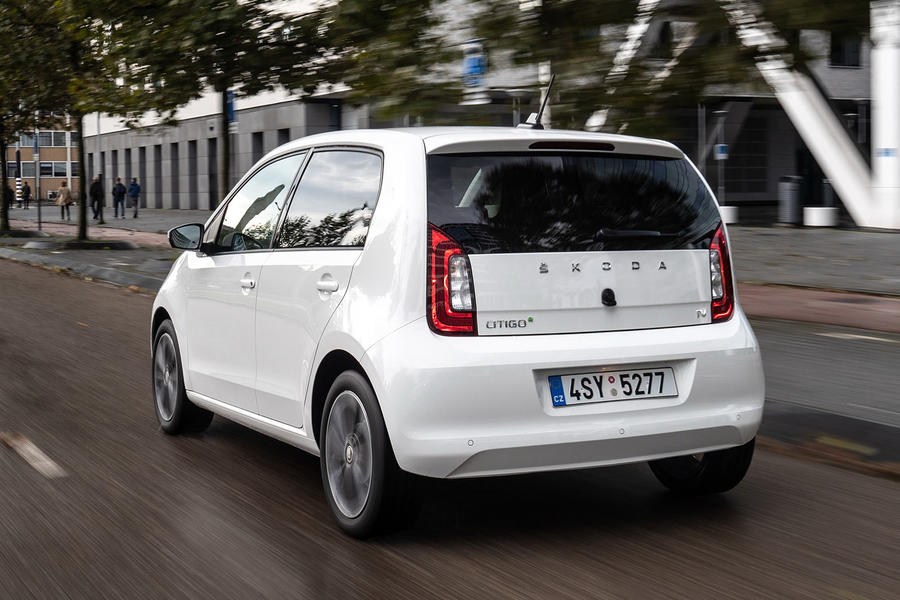 There will be two versions of the Citigo-e offered in the UK early next year: the SE and the better equipped SE L. Our Dutch-spec test car was closest to SE L and acceptably well equipped, with electric front windows, heated front seats, remote central locking, rear parking sensors, basic 'ambient' air conditioning, body-colour mirrors and doorhandles and an on-board charger capable of accepting 40kW. At this rate, the battery can be replenished from zero to 80% in just one hour.

The SE L costs £22,815 (£19,315 including the Government’s £3500 grant). The cheaper version, which as standard can be charged only from a three-pin plug or 7kW wallbox (still perfectly adequate for many a drive-to-school-or-station application), saves you £2360. At £16,995 post-grant, the Citigo-e iV is one of the cheapest electric car options going.

It feels much faster in acceleration than its claimed 0-62mph time would have you believe, mainly because, as with all electric cars, its maximum torque is delivered from standstill, so it can zip away from traffic lights with the best.

It’s no long-distance cruiser, although 65-70mph feels comfortable enough. And while we had no opportunity to test the range fully, several circuits of a fairly long city route appeared to show that 161 miles is no lie.

In tight going, the Citigo-e iV comes into its own, as you’d expect. Small dimensions and quick steering make it feel quite sporty and fun to drive, even though the suspension rates (and possibly an insulation effect from the underfloor battery) also make it surprisingly quiet and smooth when riding over cobbled streets.

There are two app-based assistance systems. Skoda Connect allows you to check battery charge, turn the air-con on or off (while charging) and stop a charging session. Then there’s Move & Fun, which allows you to do some of the same stuff but also preset charging times to take advantage of lower electricity costs. 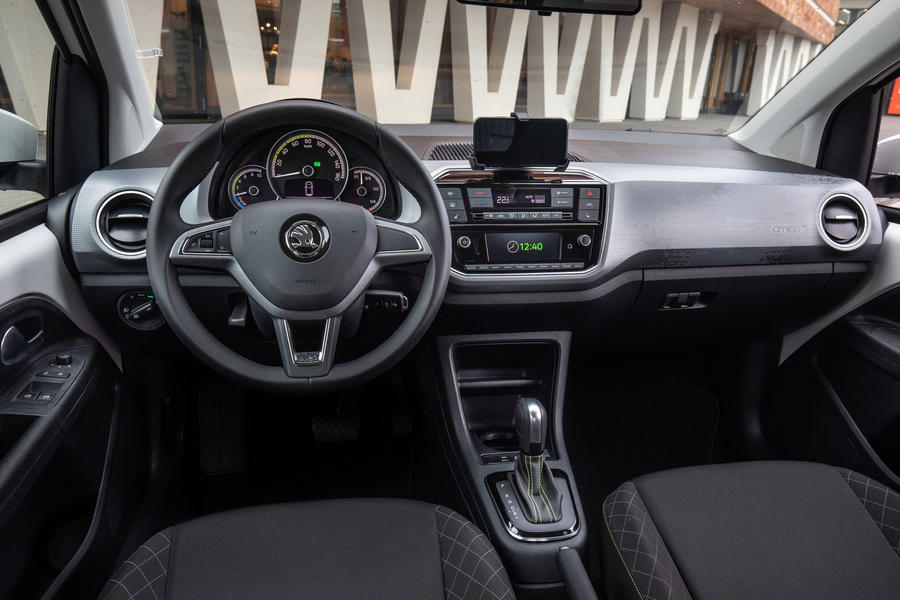 The Citigo-e iV looks a good proposition, provided you know what you need it for. This is no motorway cruiser; it’s barely fast enough and you’ll run the battery down rapidly. B-road sojourns of 30-50 miles are no problem, but the car’s real métier is zipping about the inner and outer reaches of cities.

It's compact, good-looking, well proven and well priced. For the right owner, it should be long-lasting, extremely frugal and a lot of fun. 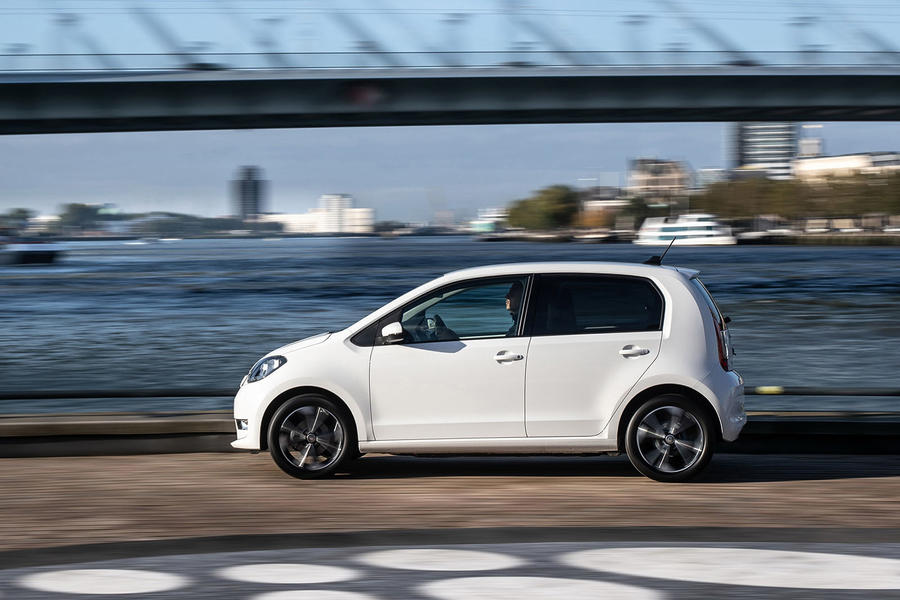 The blanked out grille is

The blanked out grille is seriously ugly, should have been a simple plate without fins.

so, what's the payback time?

There are environmental concerns which to many people take priority over monetary ones.

2 December 2019
You mean pseudo environmental concerns! Factor in higher environmental impact in production and the postcode lottery in terms of how electricity is generated in your part of the country and the environmental advantages of running a EV could take quite a while to add up.

Isn't the citigo the same as the Mii and up in that they aren't doing petrol versions anymore? With the exception of the up GTi maybe?
But it'll take a lot of mileage to recoup the extra outlay of the discontinued? petrol versions I would guess. It is a massive saving over the e up though.

Not that many if you use it in the Congestion charge zone of London, + you have a better car!, also of benefit to other city dwellers

How long to pay back

Some quick fag packet calculations. At 6,000 miles per year with todays road taxes and fuel prices in year 8 you save money. that assumes both cars then have the same resale value and same maintenance costs. If fuel prices rise greater than electricity or road tax does etc, payback gets quicker. Or about 50,000 miles. And if you get better future value then again the equation changes. Depreciation can wipe out the fuel type of running costs, but then so can PCP deals etc..

emissions, tricky. If it is used in an inner city area then it helps from day 1. If not then the indications are that somewhere after 30,000 miles the electric car is better in the UK.

truth is, you want to save the planet and same money on short journeys get a bicycle.

I would agree that the payback will be closer to around 4-5 years as the electric will hold its value better than diesel or petrol which may go into free fall. Also service costs are lower with electric many motors are sealed units until 100k

I would agree that the payback will be closer to around 4-5 years as the electric will hold its value better than diesel or petrol which may go into free fall. Also service costs are lower with electric many motors are sealed units until 100k

You mean Crystal ball economics? Well whatever the future holds you'll find in the real world, a Nissan Leaf held on to it's value no better than other cars. In fact if you have a look what the list price was and then look at what they're selling for ( the selling price would have been much less ) I could put forward an argument it's actually depreciated more.

Interesting to read that the Citigo's usable battery capacity is "only" 88% of the declared battery capacity. Presumably this is to prevent the battery from ever being fully charged or discharged, which would compromise its life. It would be interesting to learn whether this is an industry norm, or whether other makers have a greater or lesser safety margin?

This discrepacy between actual and usable battery capacity probably explains why the range of some EVs is less than anticipated, and maybe also why so far, battery longevity has not been an issue with most manufacturers.