The Corvette has gone mid-engined for the first time in its 67-year history. Time to see how the American compares with Europe's finest
Open gallery
Close

Right, it’s here. Sort of. It’s not officially here, but we’ll come to that later. This is the new, eighth-generation Chevrolet Corvette, the C8 Stingray, and, for the first time in its 67 years, this all-American hero, beloved by everyone from blue-collar workers to astronauts and presidents (Joe Biden owns a 1967 model), is being sold with an engine in its middle.

It will also – late next year at the earliest – come with a steering wheel on the right-hand side. More on that later, too. If you want a C8 now, you can have one, but your options are limited to importing one yourself or sourcing one via a UK importer.

That’s quite tempting on the face of it, because the base Corvette price in the US is less than that of the Porsche 718 Cayman, at just under $60,000 (about £44,000). But the reality is that it doesn’t work out that way once you’ve done the maths and added the premium, taxes, shipping and then some more taxes. But if you do, the car you end up with might look something like this.

This is a Corvette with a few options, of which there are many available. It’s in the 3LT trim level (about $11,000 more than standard), which means it’s top-spec, but more pertinently it’s equipped with the Z51 performance pack ($5000) and more, which all add so much to the price that it’s quite easy to end up with an $85,000 car even in the US.

Every Corvette has a naturally aspirated 6.2-litre pushrod V8 engine mounted in its middle. There’s an aluminium monocoque with aluminium subframes front and rear and composite bodywork, with double-wishbone suspension all-round and magnetic adaptive dampers (another $1895). 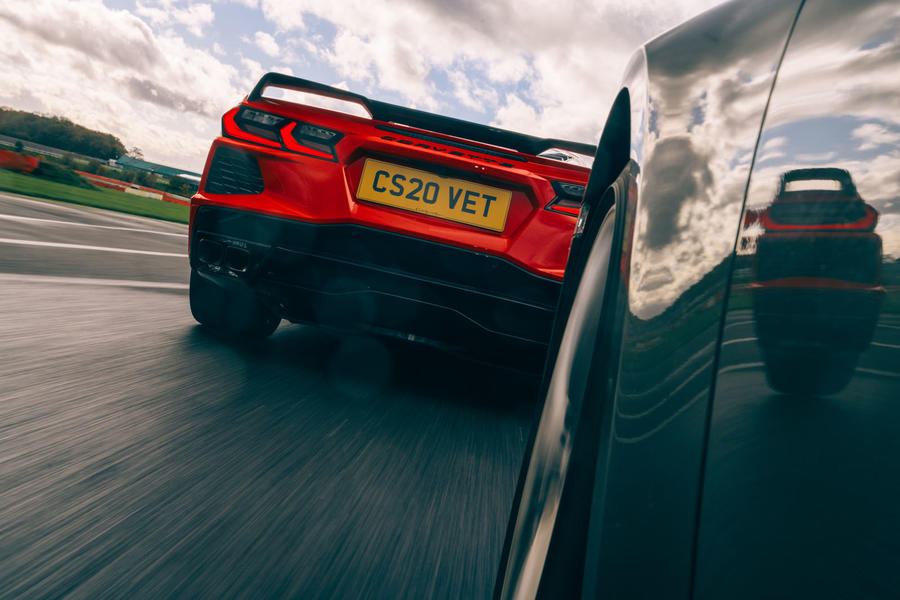 Specify the Z51 kit and power is raised to 495bhp, plus you get bigger brake discs, more aerodynamic addenda and sticky Michelin Pilot Sport 4 tyres in place of all-season rubber, a sports exhaust and an electronically controlled limited-slip differential. So you definitely want the Z51 pack. But whatever spec you choose, the C8 comes with an eight-speed dual-clutch automatic gearbox; there’s no manual for the first time ever.

I remember going on a Corvette launch where I was told that purists of the brand wouldn’t stand for it if a ’Vette didn’t have leaf-sprung suspension on at least one axle. But now? They will whistle: daaaaang son, this has got all the trademarks of one of them fancy European sports cars.

So we’ve brought one along to meet it. It’s a Porsche 911 Carrera, editor Mark Tisshaw’s long-termer, which comes in at £82,793 before options and £90,891 as tested. We will come back to the money, I promise, but it costs less than this Corvette. It has less power as well – with 380bhp from its turbocharged 3.0-litre flat six, by quite a margin. But a comparative paucity of power has seldom stopped 911s before.

The red car isn’t yet registered for use on UK roads, despite its numberplates, so we’ve borrowed a track and promised the independent importer that owns the Corvette, Clive Sutton, that we won’t do too many smoky drifts or try to match the quoted 2.9sec 0-60mph time. 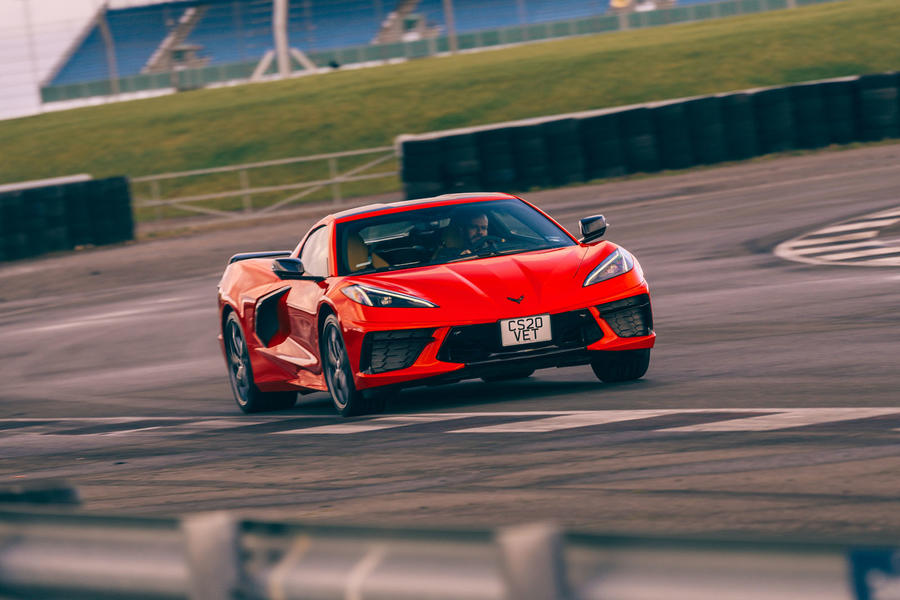 So instead let’s begin inside it, where I like it. There was a time when I would have said that American car interiors were a generation and a half behind Europe’s best efforts, but it’s closer these days. There are still a few plastics and ergonomics that make you think the Corvette isn’t quite up there with the 911, but it’s much, much closer than it used to be.

There’s a big line down the middle of the centre console that houses all of the climate controls and a strangely squared-off steering wheel, but that reaches a long way towards you and, by and large, this feels a purposeful, driver-centric cockpit.

There are driving modes to pick from, and these alter the digital dials too, but this is a logical enough cabin that extends its practicality to having a removable targa panel roof that you can stow in the rear boot, behind the engine – a location wide enough, I suspect, for a set of golf clubs. There’s also a fairly deep boot in the front, so this Corvette is quite a practical car (there will be a full convertible too).

Is it also usable in this country? At 1933mm, the body is quite wide (we will say for sure how that feels when we get one on the road) and, for the first time, there’s an optional nose-lift, which refreshingly works in no time at all.

Practical or not, the C8 is different to previous Corvettes by a bigger margin than I expected. You fire it up and the LT unit thumps away as big V8s do, but that’s largely where the similarities end.

I’ve enjoyed past Corvettes. I liked their laid-back, front-engined, lazy, limited-slipped muscle car handling. Well, the C8 doesn’t handle like that. Perhaps that should be obvious, but it occurs to you amazingly quickly: it takes about half a corner. You head out onto the track, accelerate and revel in the linear, meaty power (peak torque is 470lb ft at 5150rpm), enjoy some seamless upshifts and then brake and turn in – and it wants to go sideways. This car is incredibly mobile, yet at the same time you can easily add whatever lock feels right and back it will come to the straight-ahead. 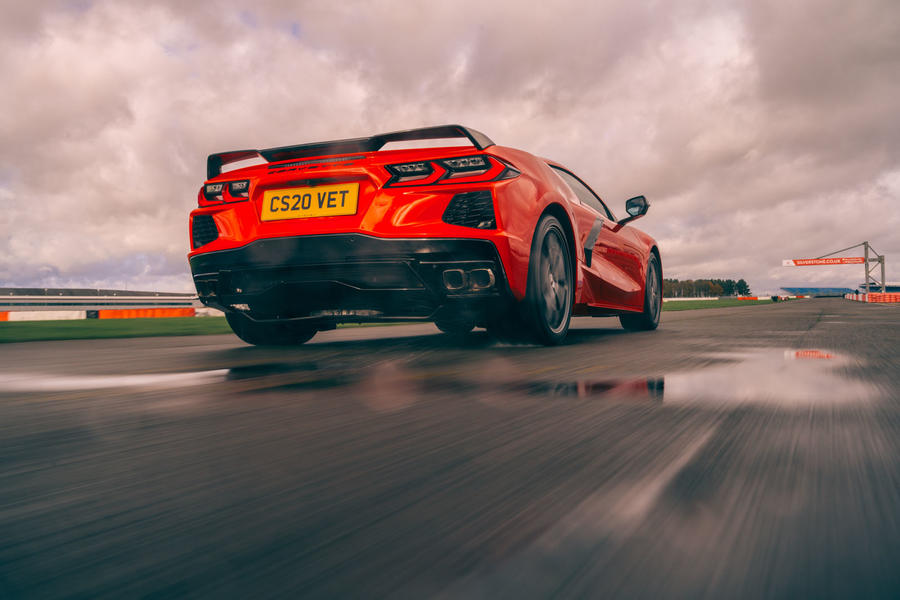 The latest Corvette has the engine layout of a mid-engined Ferrari and behaves not unlike one on the limit. It’s eager to turn too much yet incredibly docile once it has done so. In higher-speed corners, it will nudge into understeer, as it also will if you’re cornering on mild throttle openings. But what’s remarkable is how agile it is and how much steering feel comes with it – which isn’t something I’ve ever associated with a Corvette.

That the rim feels like suede always helps, I’m sure, but it has terrific feel and engagement and to me seems like one of those cars that was developed by drivers for drivers, in a way muscly, brutish Corvettes haven’t before. It feels like a wieldy precision tool. I would say it’s more initially engaging than a 911.

And the latest 911 is polished to a sheen like never before. Its interior is superb, its driving position is great, finish and refinement are excellent and the dynamics these days rather reflect the same. It’s so extraordinarily polished. Body control is tight even on a circuit, even though this is the base model.

As with the Corvette, there’s a bit of push if you go into a corner with an unweighted front end, but the linear, heavier, equally slick but not as feelsome steering is on your side and, if you do unsettle the back end, you can play around with the balance like the engine isn’t actually out behind the rear axle after all.

This 911 is so refined, honed and trustworthy that it’s perhaps as complete a sports car that has ever been made. I would argue that it sometimes feels too slick and complete on the road, the 911 turned into something else – almost like an executive, sporty coupé, rather than a sports car. A bit Mercedes-Benz SL, only it’s better.

I don’t think the Corvette can do all the 911 does on the road. Sure, it’s geared lengthily enough but, going by what I felt on a smoother surface and a run to Silverstone’s on-site fuel station, rolling refinement and comfort won’t match the 911. But y’know, it’s great fun and it has a 6.2-litre V8 closer to your shoulders, and there’s nothing much wrong with having that, is there? 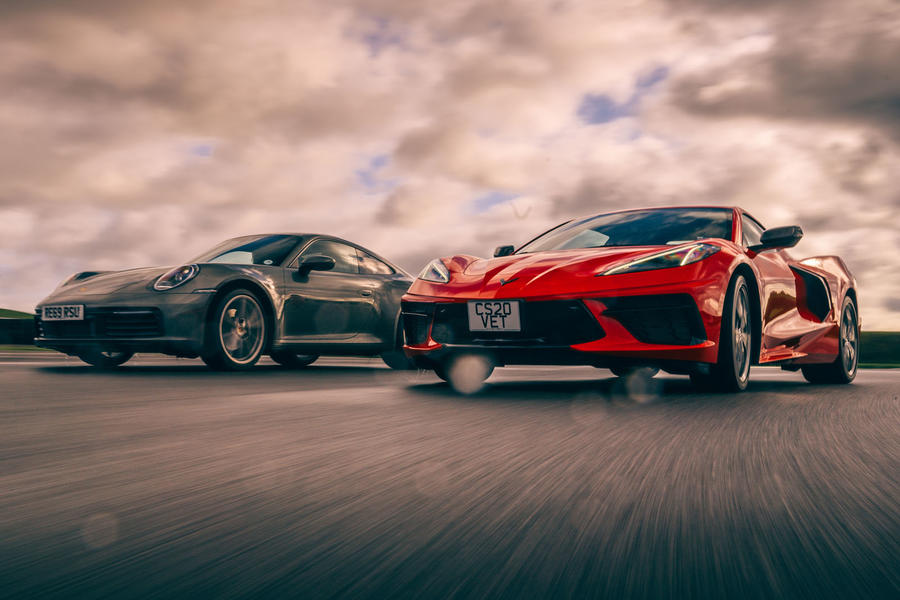 Which brings us to the nature of having that in the UK. General Motors, despite pulling out of Europe and right-hand-drive markets because it couldn’t make any money on passenger cars, announced this summer UK pricing for the right hand-drive Corvette (starting from £81,700). What do you call a halo model where there’s nothing beneath the halo? GM’s sole official UK dealer, Ian Allan Motors in Surrey, already has close to 200 orders and would quite like some cars to go with them.

Trouble is, what with this and that, production in the US is already lagging badly behind supply, and the place where GM sells big numbers of cars remains its priority, so it’s unlikely that we will see a British-spec Corvette before this time next year or possibly even later. So the established prices – cheaper than we thought they would be – will have changed by then.

So if you want one now, you can go source one from the US or ask somebody else to do it for you, which is where Clive Sutton comes in. The price depends on various things. Sutton can order one but will have to pay over the odds, because the ’Vette is still that kind of ‘it’ car. Then there are local taxes, then shipping, then more taxes, including VAT, when it arrives in the UK and then it has to go through an IVA test, including some modifications to make it legal and, well, you’re looking at something that has racked up almost £95,000 in costs before anyone in the UK has made any money on it. Given they won’t do all that for nothing, and while your mileage may vary depending on the exchange rate and spec and American dealer premium, Sutton asked me to insure our test Corvette for £130,000.

But if you want one now – and some people will – that’s where you are. That curious but not unfamiliar place where a car that in some places costs less than a Cayman ends up more expensive than a 911. Were this a recent Corvette, I would have told you not to be daft. But for a car offering this engagement, steering and handling and still with a V8…? I’m not sure it’s that daft at all.

Save on a used Corvette

1954 Corvette C1, £76,000: The first Corvette came out with a truck-derived straight six and a two-speed auto. So it’s a wafter, not a scorcher, but also one of the most visually arresting iterations. This one is fresh from a restoration that included a full engine rebuild. 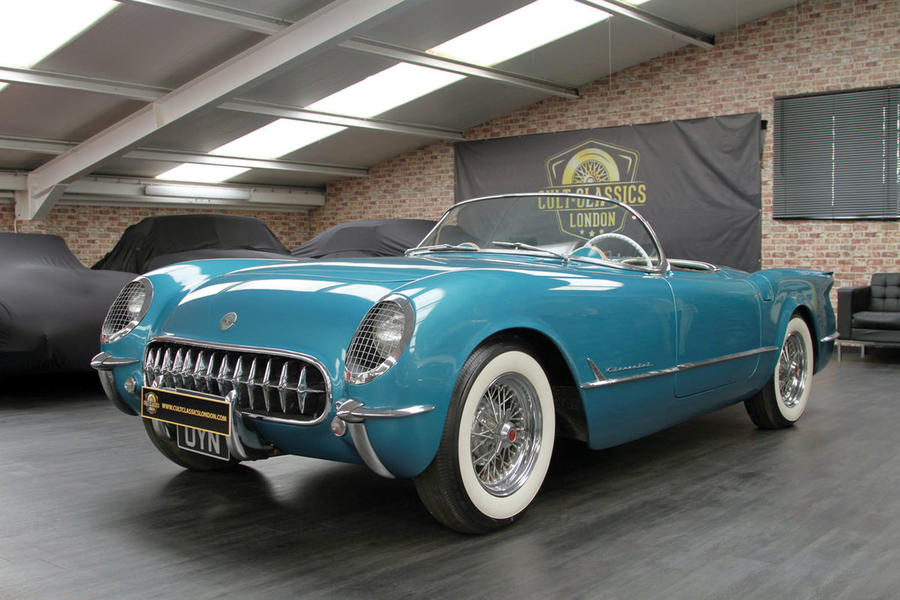 1996 Corvette C4, £11,900: The C4 inspired the shapes of all successive Corvettes until the C8, but it’s not regarded as the pick of the bunch. However, later cars got far healthier outputs from a freer-breathing V8 and had a much nicer interior. Just £11,900 for a runout convertible seems good value. 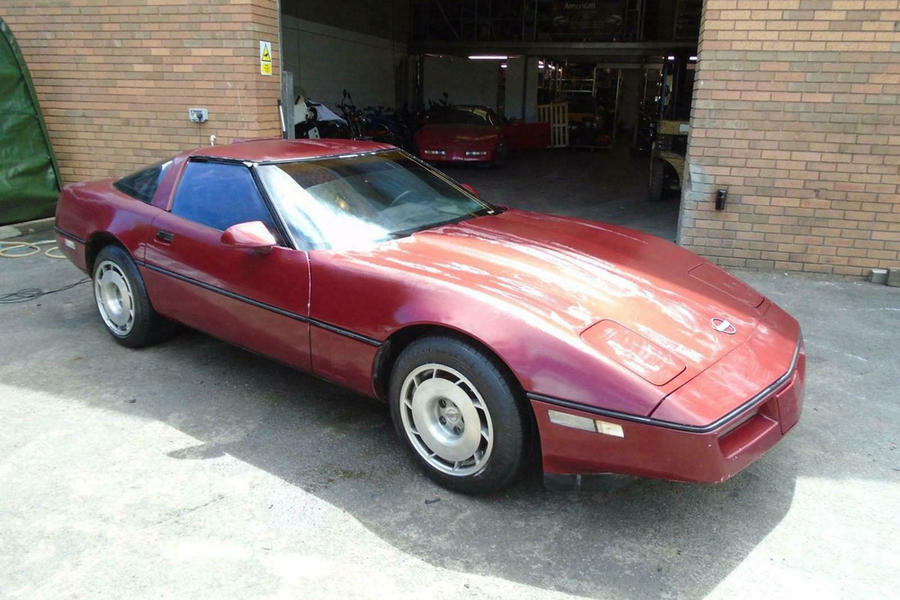 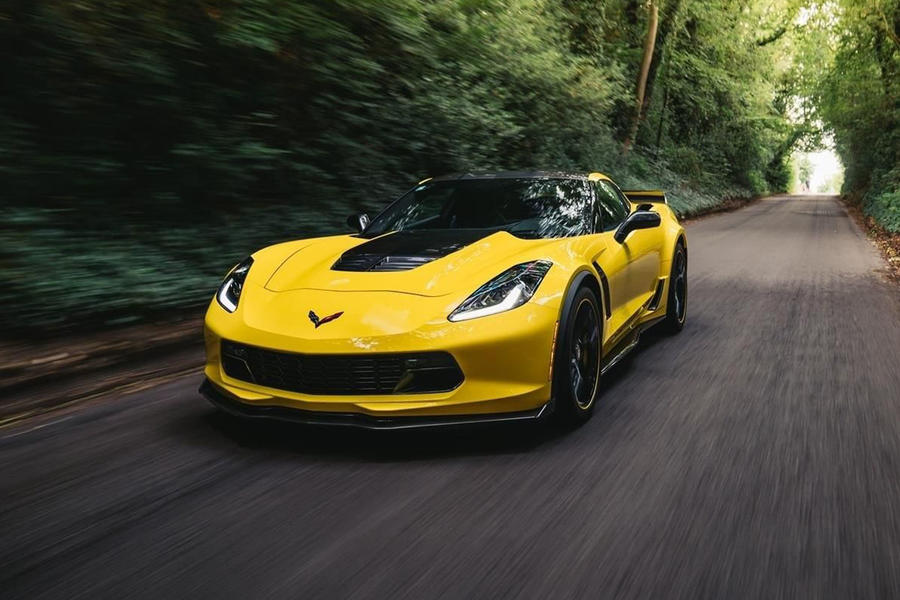 It is curious that it has a non-turbo engine which is old-school wonderful, but only an automatic gearbox, which is tragic, and totally deal breaking.

A used Corvette for £12k? Seriously?

You would be lucky to spend less than £20k to get a decent one.

As for the new one, well it's a car to get you looked at, but not a serious competitor for Porsche or Ferrari.

The 911 is more practical and uses a cooler font.  The Corvette is otherwise superior.  A supercar at an amazing price.  It's a MONSTER with forced induction.