BACK TO ALL NEWS
Currently reading: Stroke of genius: why car signwriting is making a comeback
UP NEXT
Volkswagen ID Buzz to kick-start wave of enthusiast-oriented EVs

Stroke of genius: why car signwriting is making a comeback

Hand-produced signage is competing with newer – and soulless – vinyl. We meet the experts
Open gallery
Close

"How much fun can you have with a brush in your hand?” Terry Smith – signwriter, hot rod owner and passionate Jim Clark fan – smiles broadly before resuming the delicate drop shadow he’s applying to a sign in his workshop.

Watching the letters come alive to his gold leaf enamel is truly humbling. Where I’d smudge the curves in a letter ‘O’, he glides around them like his hero at the wheel of a Lotus 49. His consistency is remarkable; almost, but not quite, as though the letters were printed.

“The imperfections are what make it perfect,” he says. “A signwritten name, logo or design has soul.” Wind back a few decades and the work of Smith, who is 67, and signwriters and pinstripers before him would have been seen everywhere from limos to trucks.

Today, you have to go to a classic car meet to view their lovingly drawn script, artful designs and rich enamel colours. “As late as the 1980s, me and others were busy signwriting commercial vehicles but the growth of leasing put paid to that as people turned to vinyl,” says Smith.

His contempt for the medium is clear – “it’s wasteful and damages the environment” – but it has at least spurred him on to champion traditional signwriting and work for its survival. On that point, he hosts courses for beginners in Brighton that are very popular. Apparently, signwriting is more appreciated in the US, especially among the huge hot rod and classic car community, although we Brits are warming to it. The Continent? Forget it, says Smith: there’s no tradition for it.

We kick off our meeting in his home, appropriately enough a converted traffic police station on a main road. The former cop shop near Chichester is a temple to 1950s design (it features some lovely old pastel-coloured kitchen cupboards and geometric tea sets) and a shrine, in the form of wonderful black-and-white photos, to his racing driver hero. Outside are three garages where the panda cars were once kept but now house Smith’s studio, garage (where he keeps his trademark pale-blue Fordson van) and shop, from where he sells his own tastefully restored and recreated automobilia. 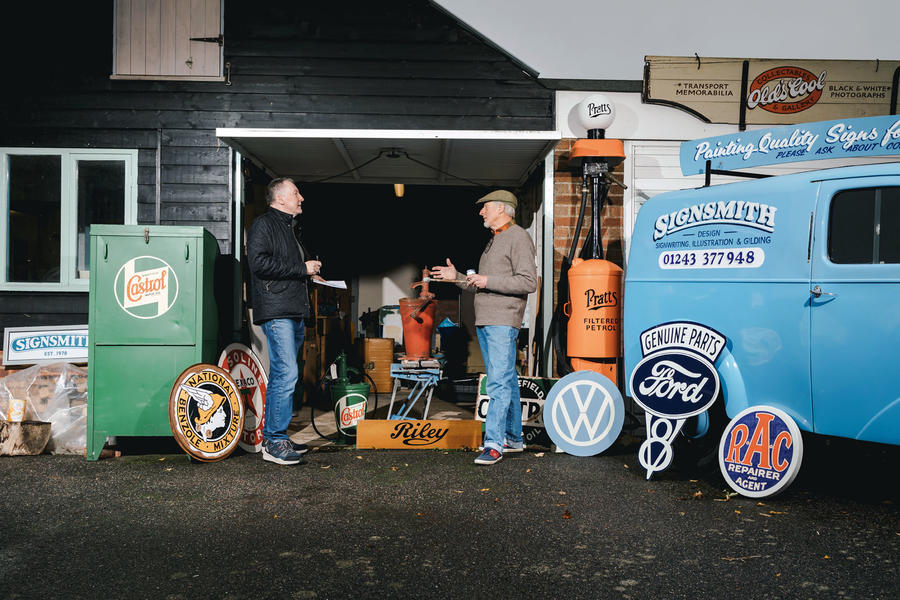 Occupying centre stage among the pieces is his other car, a Model T hot rod. My attention is drawn to the painted flames that trail from its radiator mascot. “It’s called a re-entry scallop, a design that originated in the US and which has caught on here among hot rodders,” says Smith.

He learned his trade working in a sign shop in Horsham, West Sussex, and says it took him five years to acquire a cursive script he was happy with. Early commissions included signwriting the drays used by King & Barnes, the town’s brewery. When traditional custom began to fall away, he focused on commissions from owners of trains, traction engines and vintage cars and trucks.

One memorable job, he says, was signwriting a restored Porsche 911 that raced at Le Mans in 1972. A typical job takes a couple of days. He uses a selection of sable brushes known in the trade as writing pencils. Unlike conventional brushes, the bristles are cut straight at the tip like a chisel, rather than tapered. He uses a maulstick to support and steady his painting arm. The paint is special signwriting enamel with good covering ability that flows easily and is so durable that it doesn’t require varnish.

I’m surprised to see that Smith first writes or draws a positional rendering in chalk like a trace, a technique called a pounce. However, he doesn’t paint over it since that would be tracing rather than signwriting in freehand. Tricks of the trade include painting the base of a vertical stroke, such as a capital ‘T’, in the shape of a fish tail, using a technique known as ‘lift and twist’. He fills it in with a deft horizontal stroke. “Every brush stroke is a breath held,” he says.

“When pinstriping and detailing, especially around a mascot, I feel time is almost standing still.” Smith describes signwriting as art and says he lives for the “aesthetics of period lettering”. I wonder, then, what he’d think of Scott Manser, a signwriter based in Camberley, Surrey, who calls himself a “working, jobbing tradesman”. Manser says: “In the old days, many signwriters were painters and decorators. There was nothing artistic about the job. Even mechanics would try their hand at lettering and numbering race cars.” 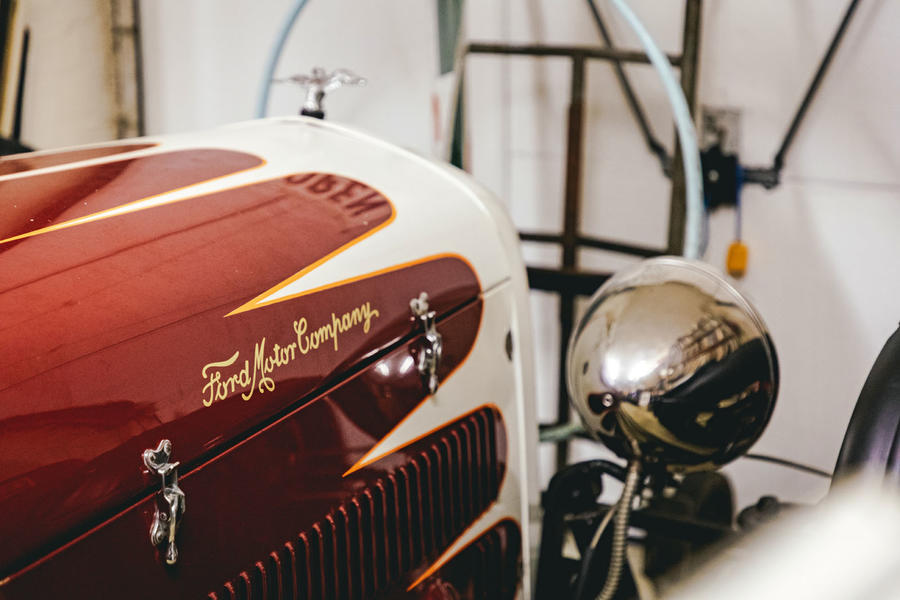 Naturally, these amateur signwriters didn’t produce the finest work, but for one of Manser’s customers, that was the point. “He’d had a Barnato Hassan Bentley racer restored,” says Manser. “It looked authentic, but for the finishing touch he wanted the numbers and script on the body to look exactly as they did in the original photos of the car.

“The thing was, back then, one of the race team’s spannermen had drawn them, so close up they looked pretty rough. But that was what my customer wanted so I had to make them look the same. It wasn’t my best work, if you see what I mean, but he was delighted.”

Coincidentally, Manser was asked by another customer with three replica Only Fools… Reliant Regal vans to redo his signwriting because it looked too classy for a chap like Del Boy. As Terry Smith might say, or even the crafty geezer himself over a pina colada, it’s the ability of traditional signwriting to convey soul and character in this way that distinguishes it from vinyl. In short, it’s better.

In 2014, some 200 signwriters from around the world descended on Rochester in Kent to raise money for charity in an event called What the Dickens. Members of the public were invited to bring what they liked and among the items were 10 cars. 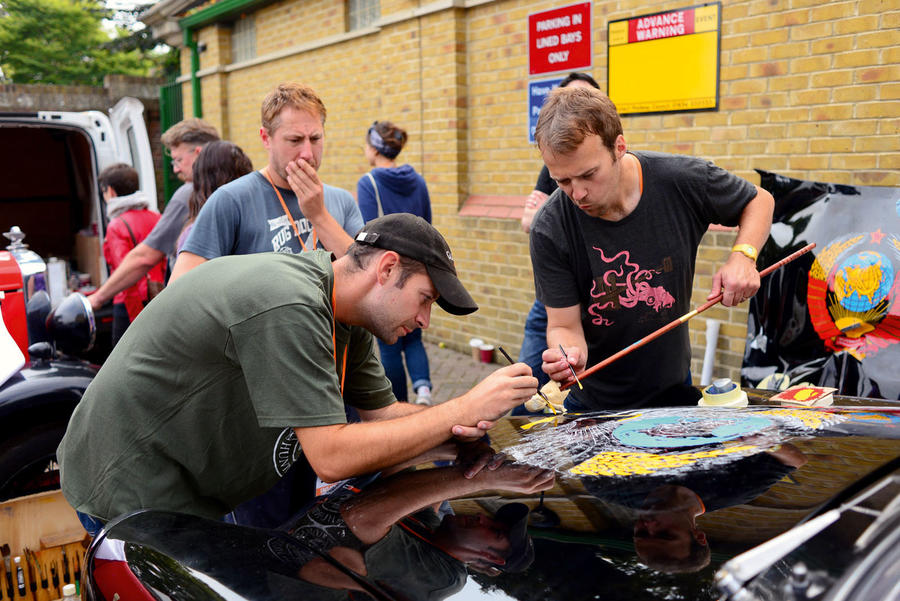 British signwriting artist Steve Blackwell, based in Bournemouth, was given a Volga to paint. The Russian saloon had been converted for racing and its owner wanted the appropriate markings.

“Originally, I’d been allocated the car to do on my own, but when I saw the scale of the job I quickly recruited four other signwriters to help,” says Blackwell.

Away from beautifying Volgas for charity, his regular commissions include Morris vans, Series 1 and 2 Land Rovers and Volkswagen Type 2s whose owners often want the vehicle’s pet name written on the back. Beats having ‘Kevin and Sharon’ on the windscreen.

The white vans of Dover: Inside the port's used car exporting industry

I've always admired a true craftsperson.  However, as most new commercials vehicles are leased it's much easier to return it after 3 years by just peeling off a vinyl sticker versus having to explain why it's been hand painted with your logo and killing the resale value....  However if I was making a one off for my own enjoyment, I'd get it hand done.

There will always be work for Artisans like him, not lots, but enough to turn a coin to two.

MarkII 20 December 2020
So many skilled trades have disappeared, it's nice to hear if one making a come back.
I remember watching a Signwriter producing a van livery back in the early 80's, the calm and almost casual strokes, were performed with a deftness that was mesmerising and worthy of respect.