BACK TO ALL NEWS
Currently reading: In search of the perfect EV: Life with the Mini Electric
UP NEXT
Britain's Best Driver's Car 2020: The main event

In search of the perfect EV: Life with the Mini Electric

We spent four weeks with Mini's EV and discovered a car that, for a certain kind of motorist, really is as good as it gets
Share
Open gallery
Close
Share story

The Mini Electric is the greatest car ever made. No, really, it is.

But only if you live in a city, have a parking spot connected to a charging point, don’t cover more than 45 miles in any given direction and are willing to pay anywhere between £25,000-£30,000 for the privilege of owning a three-door supermini, albeit one with near-hot hatch levels of performance.

But I really do mean what I say: for a niche of people – maybe a very small niche of people – the Mini EV is the answer to all their questions: intoxicatingly desirable, neck-jerkingly rapid, with a lashing of the brand’s self-declared go-kart-like directness, blessed with a hint of sporting prowess (albeit slightly let down by a weight-induced desire to push on if you really try) and oh so cheap and easy to own, thanks to running off the plug. If all my stars aligned, I would buy one in the blink of an eye as a second car and, based on what I’ve learned over the past few weeks and hundreds of miles, probably never look back.

So the question that you really have to ask yourself before buying is not whether you will enjoy it – because all but anyone shopping on the most focused edges of hot hatchdom and beyond should – but how well it will fit into your life. This largely boils down to just three things: whether you want a supermini, will pay the price (which surely most will swap for a monthly lease of about £250), and can live with the 110 miles of real-world range I squeezed from it on a good day or the 80 or so that it proffered on a long, slightly bum-clenched motorway run on a miserably wet and cold day. 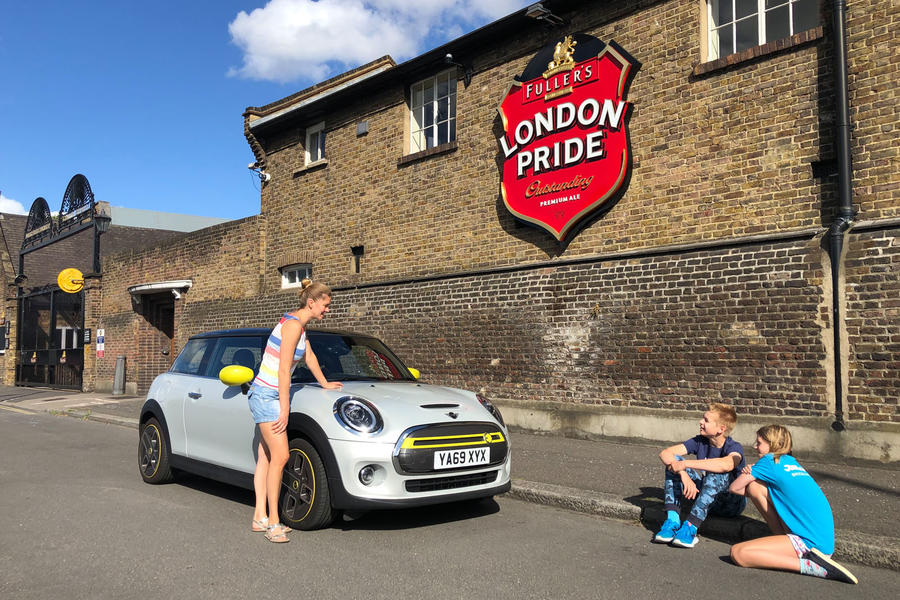 Before you shudder, please remember that, for most people most of the time, this will be enough, even if you don’t realise it. Driving statistics are well recorded and prove beyond doubt – or, in many cases, our own perceptions – that the Mini’s range will meet most needs. Yes, there were days I left the Mini at home. But when I took it out, not once was I let down, even if there were a few moments when my unfamiliarity prompted a bead of sweat on my brow.

Will everyone agree? No. And that’s why I strongly suspect sales will be slow as a result; as sluggish take-up of the first-generation Nissan Leaf and Renault Zoe showed, this sort of range has never been reassuring enough to guarantee a stampede of interest (especially when the aforementioned rivals now offer twice the range for much the same price). But for some people, if not you, unquestionably it will be just fine.

So let’s suppose you can get over the limitations (and if you want to own a premium electric car, you might have to for a good few years, such is the reality of the cost differential between a battery and motor and an engine). Maybe you just don’t drive far every day. Or maybe, like us, you live in or around the edges of a big city, commute 20 miles on a big day and travel maybe 40 to see friends every so often. Maybe, also like us, you own a second, engined car, which is always there to get you where you need to go on the few occasions you need more. Or maybe even another electric car – like a Tesla, Hyundai Kona Electric or Kia e-Niro – that will do 250 miles, or a plug-in hybrid. 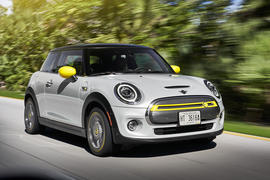 If all these things describe you, you’re free to rate the Mini not in the isolation of its strengths of weaknesses but rather the totality of how it fits into your life. And then you will discover that, in execution, the Mini is near-flawless, if at times a little puzzling. What it’s short of, you would expect a Mini to be short of. Space and practicality are inevitably high on that list, although we did bobble around as a tall family of four easily enough. What it has, more strikingly, ranges from the charming good looks through to the ease that comes with driving such a compact car, plus what has always been an interior that makes every time you drop into the low driver’s seat feel like arriving at a party.

Mix in the design flourishes, from the acid-yellow paintwork touches through to the now hastily renamed Corona three-pin plug wheels, and you have a car that oozes appeal. 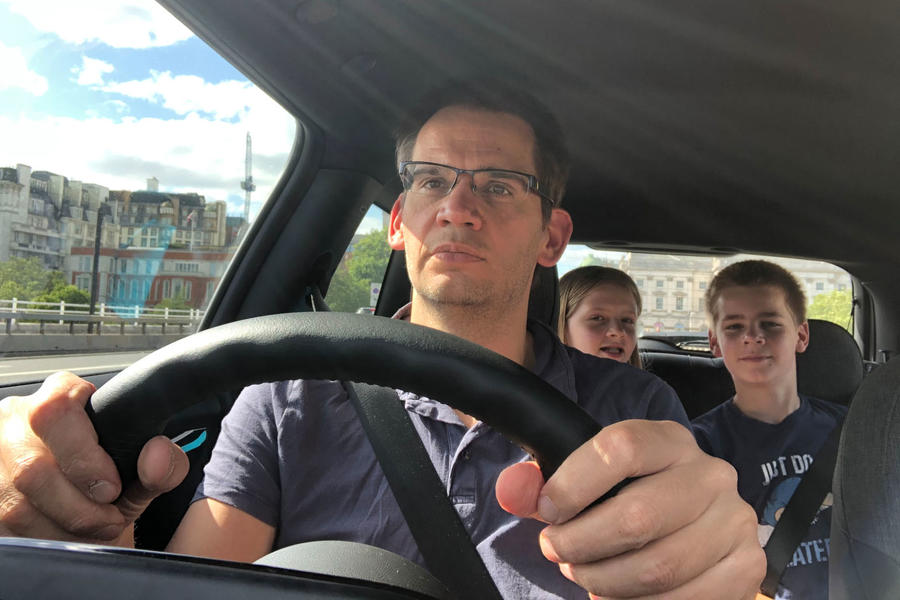 Unquestionably, the driving experience is also something of an occasion for the uninitiated. The 181bhp, 199lb ft electric motor comes from the BMW i3s and is attention-grabbingly rapid if you shove the throttle from low speed and with one of the sportier powertrain settings selected, although driving like this is, similar to being on the motorway, a surefire way to gobble up range; a single surge takes anything up to five miles off the indicator in the blink of an eye.

This, certainly, is a flaw, for while enthusiastic driving has always come with a penalty, there’s no escaping that here the 32.6kWh battery pack’s range is to be cherished more than petrol. It’s a pity, too, that the range indicator is inherently optimistic; you might do a mile for a mile in free-flowing city driving, but you lose rather faster than it thinks you will pretty much everywhere else. Here, still, Hyundai and Kia set the standard, and EV makers the world over would do well to understand the significance of the confidence that comes with realistic range estimates.

Unlike in the i3s, power is delivered through the front axle, which is a possible contributor to the aforementioned tendency to wash out if you really push on. That Mini hasn’t been able to overcome the forces of physics (it records a 1770kg gross vehicle weight that would make Sir Alec Issigonis’s head spin) should be no surprise, nor dent the appeal for most owners, but it is a pity that the sporty side of the promise only goes so far and ultimately isn’t entirely delivered on. In that regard, the Mini Electric is a reminder that the dream of an electric hot hatch that can match today’s end-of-era heroes remains some way down the development line.

Yet these shortcomings aren’t enough to undermine the opening premise. The Mini Electric is a great car. It was intriguing to read Steve Cropley recently describe the Honda E, surely one of its fiercest rivals, as a five-star car for desirability, wrapped in a four-star package, undermined as here by its price and range. If that sounds ridiculous – and I can imagine eyes rolling as you rattle off examples of other things that would be good if only they were just a bit more useful and weren’t so damned expensive – I urge you try one and then come back denying that you’re somehow smitten.

Nobody will buy this Mini to ponder the answer to a philosophical question but, after driving it, if you’re still wavering, I feel reasonably strongly that it can only be because this is a car that challenges a now ingrained expectation that our vehicles should do everything all of the time.

The Mini Electric doesn’t suit everyone and isn’t capable or well-priced enough to take an automatic place on the shortlist of even those who it does appeal to. But times are changing and, if you want to enjoy the ride, we may all have to accept that this is the price you have to pay.

Back in 2015, research company Bloomberg-NEF estimated that 57% of the cost of the average electric car was for the battery. An engine, in contrast, was typically around 15% of the cost.

However, battery prices are tumbling: the price per kilowatt-hour of battery capacity was estimated by Renault – EV pioneer with the Zoe – to be £932 back in 2010, whereas by 2018 it had fallen to £144. It’s predicted to dip below £81 by 2024. Chiefly, increased lithium and cobalt supply – via more mining – is credited with the drop.

The difficulty for the buyer, however, is the varying strategies of manufacturers. Renault and Nissan can offer a 200-plus-mile car for nigh-on the price that Honda and Mini are asking for 120 miles. Hyundai and Kia, meanwhile, offer a third more again for about 20% more money.

Which brands, if any, are making a profit on EVs remains to be seen, but if range is your benchmark, there seems a wider chasm than ever on value for money between the premium and non-premium offerings.

These make the perfect second

These make the perfect second car for a household. Sadly few can afford such an expensive second car. However in 3 years when the second hand ex fleet cars come to market it will start to be a different thing.

The £3,000 from tax payer to get private buyers into EVs is nothing compared the tax break for company car driver who ends up paying nothing at all. It still doesnt really make sense for a private buyer to go EV with a new car, but once they have depreciated, and are available in larger numbers it will be different.

It would be interesting for Autocar to tell us the split of EV sales between private and business. However all those company cars are going to end up with the public in the end.

Of course you are still going to need somewhere to plug it in. And at some point the government are going to want some tax from EV drivers so the current saving will reduce at some point.

4k more than the equivanlent Mini but then it'll save at could save 1.5k a year on fuel and tax. No doubt some will still moan BEV's are useless till they can do 300+ miles in one go and recharge in less than 3 minutes, at least they are an ever diminishing luddite mob

On the face of it £24900 ( after grant ) is a huge price for a small town car, but if you're in the market to buy this size of vehicle new, is there a better buy? You're paying north of £20,000 ( list price anyway ) for a ICE rival these days so as the author says, if you have access to charging, then it sounds a no brainer. As a bonus, I'm guessing the residuals will be as good as any car on sale in the UK.