Mini looks to be readying a subtly facelifted version of its new Electric hatchback just a year after it was first launched, as part of a round of updates for its line-up.

As with a camouflaged prototype of the Mini 5-door hatchback spotted last week, the Electric looks to gain a reshaped bumper and front grille, but covered-up interior elements suggest the EV could also be given a new infotainment system. Changes elsewhere are likely to be much more subtle, given the car was only recently launched.

The five-door, however, is due a substantial facelift before 2023 - having only been subtly updated once in its seven-year lifespan - to bring it into line with newer rivals including the Audi A1 Sportback, Ford Fiesta and Renault Clio. A prototype spotted by our photographers looks to be hiding only small styling tweaks beneath its front and rear camouflage wrap, but more interesting are clues that it's a plug-in hybrid. 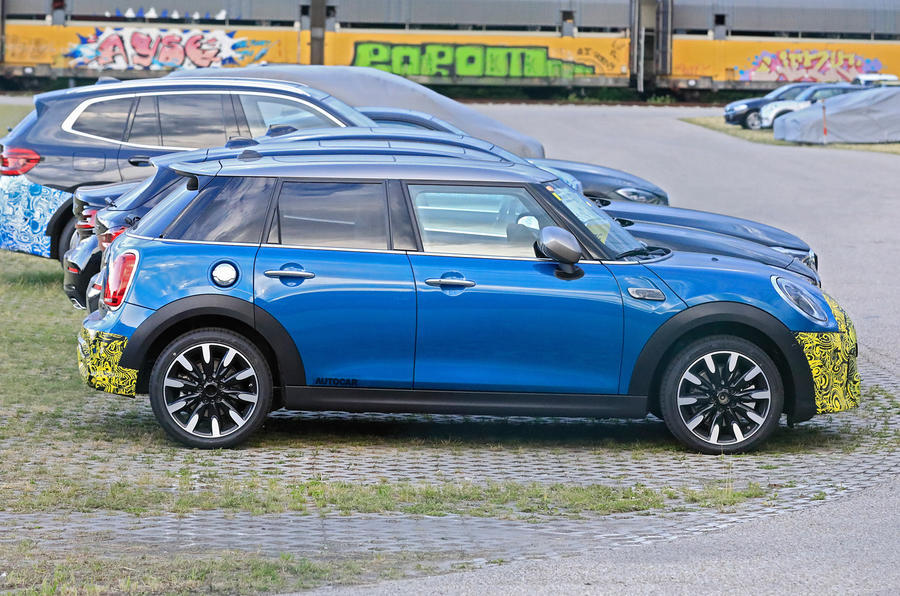 The 'E-FZG' sticker in the front windscreen means the mule's powertrain is composed of both internal-combustion and electrical elements. Given that Mini is yet to introduce mild-hybrid or hybrid options to its line-up, it's likely to be a variation of the larger Countryman Cooper S E All4's plug-in hybrid powerplant. No charging socket is visible, but the Countryman's is on the opposite side of the car to the fuel filler cap.

Such a move would make sense, given Mini's gradual transition to a maker of pure EVs, and would secure it an early spot in the burgeoning plug-in family hatchback market, which is currently occupied by models including the Hyundai Ioniq Plug-in Hybrid, Mercedes-Benz A250e and Volkswagen Golf GTE.

It's not yet known whether the Cooper S would be offered solely as a plug-in hybrid. Earlier this year, Autocar reported that BMW had delayed development of the next-gen Mini hatchback, both for reasons related to the cost of upgrading its Oxford factory and because of uncertainty surrounding Britain's relationship with the European Union.

The model is set to move from its UKL1 underpinnings - new in 2014 - to a new platform, likely BMW's front-driven FAAR architecture or an entirely new platform developed in partnership with Chinese company Great Wall Motors. The FAAR architecture already underpins a plug-in variant of the BMW X1 SUV, but the Countryman PHEV sits atop a four-wheel-drive platform.

If it does follow in the footsteps of its larger sibling, the Cooper S PHEV can be expected to take its power from a turbocharged 1.5-litre three-cylinder petrol engine delivering 134bhp and 162lb ft at a low 1250rpm, with a brushless electric motor serving up 87bhp and 122lb ft. It's likely to improve on the Countryman PHEV's 26-mile electric-only range but will weigh substantially more than its petrol-only sibling, so performance figures will likely be affected.

Elsewhere, expect updates to be in line with those of the recently refreshed Mini Countryman. Design tweaks will be minimal, but the hatchback is likely to receive the Electric's digital instrument display, an optional 8.8in touchscreen and a raft of new personalisation options.

Was in for service last week, the 3rd gen is a munter, no getting away from it. Could live with a Cooper S 3dr in a dark colour just. The filing cabinet grey Clubman loan car was nice to drive, but looked utterly hideous, try harder Mini.

The Mini was designed to be

The Mini was designed to be three door only (actually two door with a boot on the original). The proportions just don't work as a five door.

They should have brought out a more Polo styled car for a five door version.

The Mini was designed to be three door only (actually two door with a boot on the original). The proportions just don't work as a five door.

I completely agree, and those short front doors are poor for driver access. But look how many of them there are on the road - there's obviously a big demand so you can't blame BMW for producing it.

crossed with a Maxi.