BACK TO ALL NEWS
Currently reading: Retro Citroen Type H-bodied Relay van on sale next week
UP NEXT
Grand touring: 1000 miles across Europe in the new Alpina B3

Vans pre-installed with the kits will be available to order through Caselani Automobili, the designers' company, and are available in both left and right-hand-drive, in minibus and panel van designs. The next design planned for production by the pair is the more rugged 4x4 version, which is coming in September. The camper, tow truck and food truck are planned for release from December.

Those interested can reserve a build slot by placing a deposit of €3000 (around £2522) within five days of having sent an expression of interest, with design renderings sent based on customer specifications within 2 months of expressing interest. The buyer then has two weeks to make up their mind, and pay a 40% deposit to secure their vehicle. Delivery will then usually take place within a week. None of the deposits taken are refundable.

Designers David Obendorfer and Fabrizio Caselani have created the body kit to coincide with the famed Type H van’s 70th anniversary. The pair plan to expand their business into retrofitting vans with the kits from 2018 onwards, while the following year, the kit will be made available as a standalone, orderable product. Compatible vans for conversion and the kit are the Citroën Relay, Peugeot Boxer and Fiat Ducato from 2006 onwards, and the 2013 Ram Promaster.

It’s not the first concept Obendorfer has created; his work includes tribute models to numerous well-known classics from automotive history, such as the Fiat 600, Renault 4 and Volkswagen T1, as well as concepts for a coupé and sports convertible version of the Fiat 500. The Type H kit is the first to be put into production, though.

Obendorfer said: “With the design we did not intend to copy the forms of the original model, but rather we aimed to capture the soul of the iconic vehicle, reinterpreting it through a nostalgic fibreglass 'suit' which at the same time is deeply rooted in contemporary style.

“The Type H 70th Anniversary Van is a fusion of direct references to the predecessor with modern solutions, combined with the reliability and the technological content of the current Citroën Relay series.” 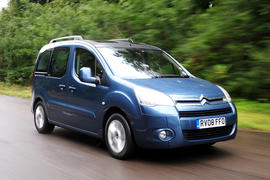 The van-based MPV gets an injection of sophistication

The Citroën Berlingo is the best of its breed: useful, well priced and not half bad to drive

Yeah, it looks great, so do

Looks a lot more fun than the

5 April 2017
Looks a lot more fun than the current crop of faux SUVs we currently potter about in, as older current cars were often taller, the Dyane of my childhood was for example only an inch lower than the current X1, though I would not be surprised if the Dyane had more ground clearance.

5 April 2017
I meant to post that five times but only managed four, sorry.

5 April 2017
Maybe there is hope for Citroen ... producing retro-refits is not a panacea, but it shows there is still a sense of humour and charm lurking in that corporate breast somewhere!

5 April 2017
read the article properly ... looks like Citroen had nothing to do with this, more is the pity :-(

Wow, I look at these pictures

5 April 2017
Wow, I look at these pictures in amazement. Here, out of nowhere, is a designer (or a designer duo) who has produced so many designs and has got almost everything right. Even more interesting are the simple clean interiors (Fiat 127, VW van, BMW 2000CS). If only car companies translated such fresh concepts into production models! To put it another way, shame on most 'real' car designers who give us the current crop of uninspiring cars.

...shame on most 'real' car designers who give us the current crop of uninspiring cars.

To be fair, making nice digital renderings it pretty easy, making those same designs work in the real world with legislation, packaging, cooling, manufacturing methods, NVH. etc. is far harder. That does not excuse many of today's dire designs however.

I am amazed they are only

5 April 2017
I am amazed they are only doing 70 kits, if offered as an extra through Citroen for a sensible price, i imagine the demand would be huge.