BACK TO ALL NEWS
Currently reading: Refreshed Kia Stinger goes on sale from £42,595
UP NEXT
Fisker goes radical with Pear EV SUV

The updated Kia Stinger is available to pre-order now from £42,595, equipped exclusively with a 3.3-litre twin-turbo V6 engine.

The Stinger is now sold only in top-rung GT S guise, which pairs its 361bhp petrol powerplant with an eight-speed automatic transmission. The 2.0-litre turbo petrol and 2.2-litre diesel engines have been dropped, as Kia claims the majority of Stinger customers went for the more powerful variant, which, with a 0-62mph sprint time of 4.7sec and top speed of 167mph, is the fastest-accelerating Kia yet sold in Europe.

The V6 benefits from a new variable exhaust system, which uses a butterfly valve to enhance or dampen the sound depending on the drive mode. 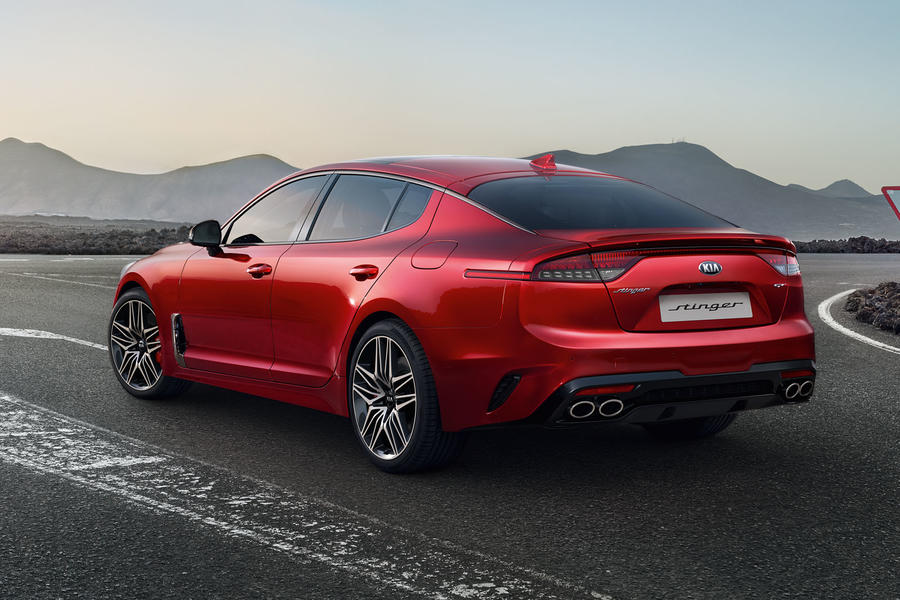 The Stinger’s design has been revamped to emphasise its "gran turismo character”, with subtle exterior revisions including LED headlights redesigned to appear “darker and sleeker” at night. The tail-lights have been stretched to the full width of the car, and the rear indicators have been redesigned to mimic a chequered flag.

Cabin updates focus on upgrading the car's infotainment and technology, with a new 10.25in touchscreen infotainment system that offers split-screen functionality, voice-control and multi-connection Bluetooth. Android Auto and Apple CarPlay are included as standard, while the dashboard binnacle can be upgraded with a 7.0in digital display.

While the rest of the Stinger’s interior is largely unchanged, new materials are claimed to make the cabin more luxurious. A chrome finish has been added to the steering wheel and digital instruments display, and contrast stitching is now available on the dashboard and doors, depending on the model specification. Customers how have the choice of suede upholstery, in addition to black or red Nappa leather.

Head of product at Hyundai Motor Group Thomas Schemera said the Stinger "remains our most driver-focused car, and is capable of covering great distances in comfort and style".

The Stinger will remain rear-wheel drive as standard in the UK, but will still be sold with all-wheel drive in left-hand drive markets.

Why the heck don't they offer 4WD in the UK? It's nuts! I'd have seriously considered it if they had but no way I'd trust myself with a near 400bhp only at the rear wheels.

Great value car. If Kia reduced the Nett pre VAT price by only £80 the base model in Cool Orange would not attract the Premium VED supplement of £325 PA for 5 year, now that really would be quite a selling point against its competitors- come on Kia...you know it makes sense.

Sensational.  Looks how a Maserati family car should.

Antony Riley 8 January 2021
I agree this Stinger is a good looking car,and your right a has a Maserati look about it.It is fantastic value shame that the badge on the drive buyers don't see that. I would buy one but unfortunately don't need a vehicle this size,it's value,reliability,and of course its guarantee is brilliant. By all accounts its a pretty nimble handling car too. What's not to like, shows those car makers in the far east are nipping at the heels of the established over rated european maker s.Give them 5 more years and they will be cars of choice for many more buyers.
View all comments (15)